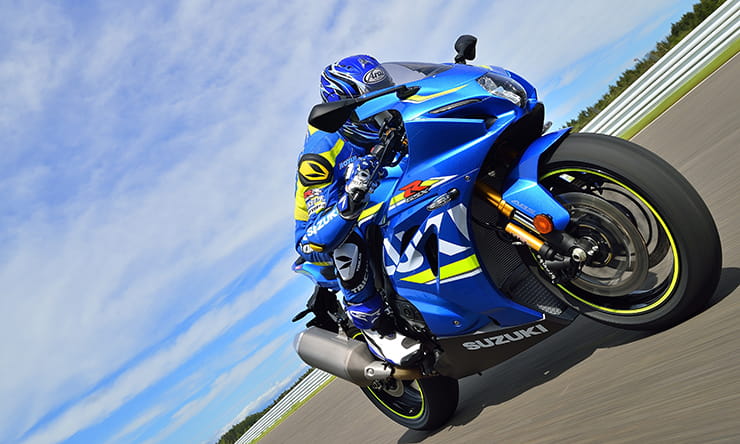 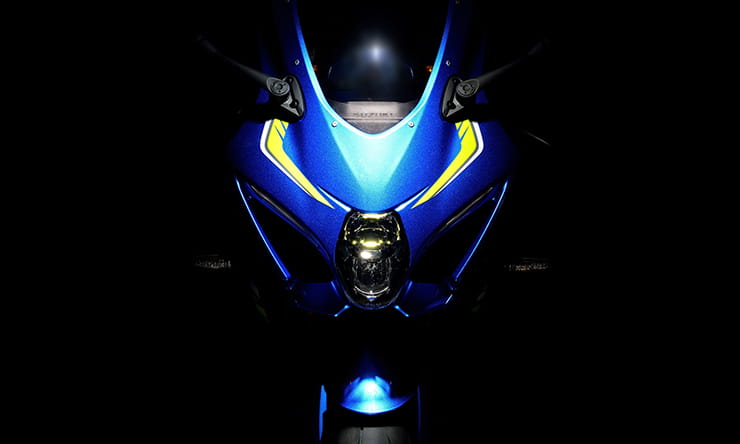 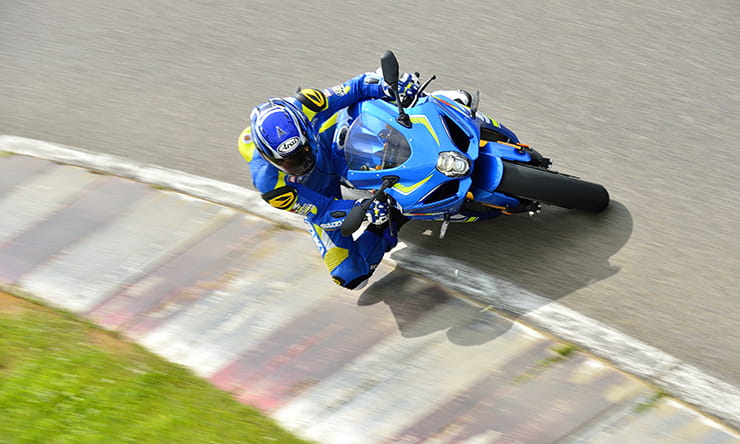 Suzuki aren’t being shy about their claims for the new 2017 GSX-R1000R, claiming it will restore the GSX-R1000 to its proper title of ‘The King of Sportsbikes’.

But, Suzuki has sold more than one million GSX-Rs since the original GSX-R1000K1 in 2001 and as one of the most-loved sports bikes in the world, and a long-awaited eight-year gap since the last major update, it’s time for the Suzuki to take a walk in the big boys’ playground. Revealed last year at Cologne as the Suzuki GSX-R1000 Concept, what you see here is now the finished production bike that will be on sale early next year.

Suzuki claim this is the most powerful, hardest-accelerating, most compact, most aerodynamic GSX-R ever built, and it comes with a full suite of the latest and best electronic aids Suzuki could lay their hands on. Suzuki say more than 600 parts are new on this new bike. Oh, and it makes a claimed 199.2bhp, revs to 14,500rpm and weighs in at a claimed 203kg wet. 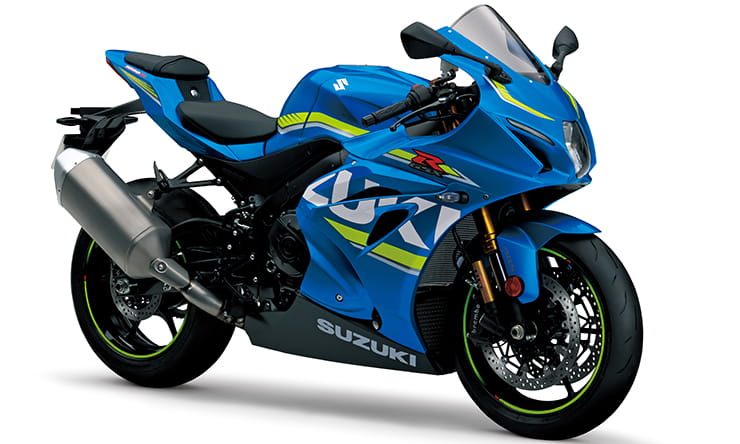 There are two new GSX-R1000s. The first is the GSX-R1000R, a top-end version that will rival the likes of the Yamaha and Kawasaki. It features a 999.8cc inline, liquid-cooled variable-valve timing motor and comes equipped with ride-by-wire throttle, cornering ABS, traction-control, anti-wheelie, a quickshifter and launch control, all controlled by a six-directon inertial measurement unit (IMU) which measures pitch, roll and yaw in six different axis.

The traction-control system is adjustable 10-ways and three rider modes adjust power and delivery depending on the rider’s choice and type of riding. On the GSX-R1000R a launch control system allows maximum acceleration adjusting levels of anti-wheelie and traction control until the rider gets into third gear or closes the throttle. The whole system is adjusted through handlebar buttons and settings on the new LCD instrument panel.

The new engine itself features a ton of high-tech options to help Suzuki put the mighty GSX-R1000R on top.

Although interestingly, Suzuki admit they carefully considered using a non-even firing order (as per the Yamaha R1’s crossplane crank) and a system used in Suzuki’s MotoGP bike.

This system improves traction when trying to put 230bhp+ down on a MotoGP bike, but makes it harder to produce strong low-down power. In the end, Suzuki preferred the traction and feel with effective electronics and say the screamer engine sounded better too.

The motor does feature Suzuki Racing Variable Valve Timing (SR-VVT) developed on the MotoGP bike. The system allows the motor to change the valve timing at a set RPM to give strong low-down power and optimum high rev power. Suzuki claim the system has been in development for 10 years in MotoGP and that none of their riders have ever been able to feel the change in the valve timing.

A 'Suzuki Racing Finger Follower' valve train (no, not some weird new social media you haven’t heard of yet…) uses thinner wall, hollow camshafts to reduce weight and moving mass. Again, it’s a system developed from the GSX-RR MotoGP bike.

Variable intake funnels boost low and mid-range RPM, along with dual-injectors. The bike’s exhaust system features an advanced new version of its exhaust valve technology to increase low and mid-range torque. The system features butterfly valves built into the mid pipe and adjust back pressure depending on revs, throttle position and gear position. A quickshifter offers race-style upshifts and clutchless down shifts with auto blipper system and a slipper clutch to stop the rear wheel locking under heavy downchanges.

Styling wise, the bike clearly keeps the GSX-R’s look and feel that has evolved since the beginning of the GSX-R1000, and before than with the GSX-R750 and GSX-R1100, the bodywork is of course all new. It’s sleeker, sharper and more aerodynamic, and some 16mm narrower at its widest point than the current bike. Suzuki’s ram-air system running through a central ducts either side of the tiny LED headlight boost the amount of air to the engine. 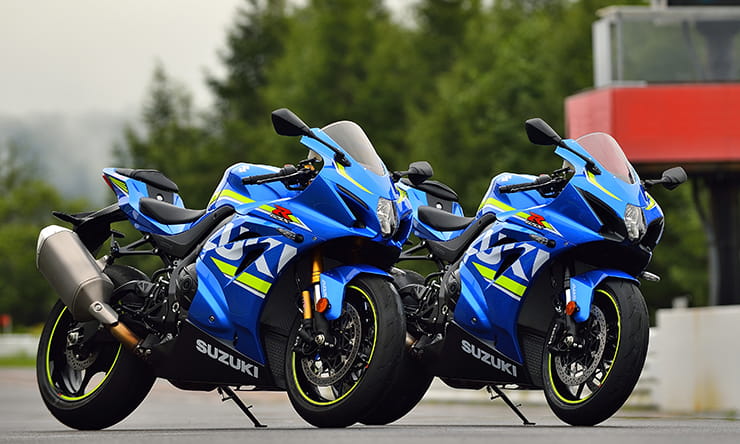 Add in Showa’s latest 'balance free front forks' and Showa balance 'free lite' rear shock, lightweight chassis which Suzuki say is designed to ‘increase the rider’s confidence in Run, Turn, Stop performance on the racetrack.’ The main chassis is aluminium and significantly lighter (by 10%), stronger and more compact than the outgoing model. The main frame sits some 20mm narrower than the current bike too, allowing the designers to make the MotoGP-inspired bodywork much narrower and sleeker while still keeping the familiar GSX-R look. The fuel tank itself is 21mm lower than the current GSX-R1000 and designed to make it easier to tuck in on a racetrack, and for the rider to move around during track riding and grip knees on the tank easier.

The swingarm is braced for optional rigidity and there’s an aluminium rear subframe in place of the older bike’s die cast version. It’s now 1kg lighter than the old subframe too.

Becoming 'King of Superbikes' is no easy feat and to help Suzuki do that with the GSX-R1000R, the Hamamatsu-based firm has fitted full race-spec Showa BFF (Balance Free Forks). The BFF system equalises oil pressure above and below the internal piston as it moves up and down, pushing oil into the fork leg and through external damping circuits that run to the other side of the piston. It allows the damping and the oil-flow to be more precise and gives the rider a more controlled travel, especially under load and over bumps. The forks are of course adjustable for rebound, compression and spring preload.

At the rear, a Showa BFRC (Balance Free Rear Cushion Lite) uses a similar set-up to the front forks, and is claimed to increase traction and rider comfort. As well as full adjustability, it is also adjustable for low-speed and high-speed compression damping.

Radially-mounted Brembo brakes feature 3200mm front discs with Suzuki’s new Motion Track Brake System (MTBS) it allows maximum braking into corners and stops the rear wheel of the bike pitching off the ground under serious braking, like in an emergency, or just trying to make the first corner on a track day. There’s also an electronic steering damper which increases damping at high speeds, and reduces it at low speeds to ensure stability isn’t affected by an over stiff damper.

Suzuki tell us the bike should be available in late Spring, 2017. The GSX-R1000R is available in Suzuki Racing metallic blue or black. 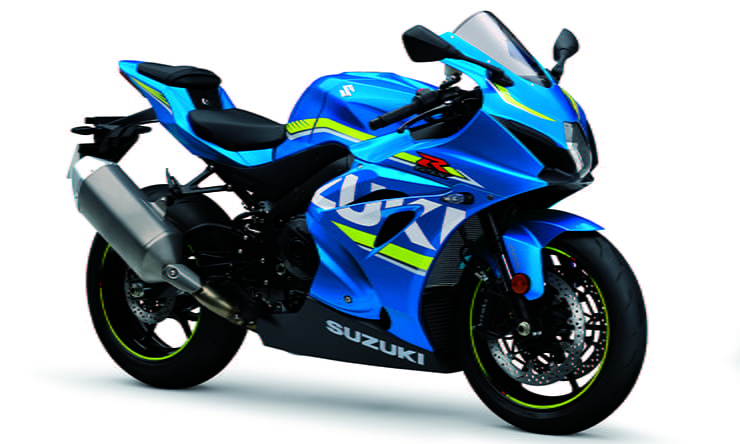 Suzuki launched two GSX-R1000s at the Intermot show in Cologne today: the top-spec GSX-R1000R and this, the slightly cheaper, slightly less specced-up GSX-R1000.

Coming in at an estimated £12,500 compared to an estimate of £13,500 for the GSX-R1000R, the new GSX-R features the same basic chassis, styling and motor as the R version, but with a few key changes to electronic aids and suspension. That makes it a bargain, in theory.

Where as the R uses the best Showa suspension available on any road bike, the GSX-R uses a slightly lower-spec suspension set-up. It’s still Showa but uses Big Piston Forks (BPF) and a Showa rear shock, all fully adjustable.

Traction-control, ride-by-wire, track brake system, and riding modes are fitted to the GSX-R1000, but there’s no launch control or quickshift system.

The GSX-R1000 is available in black, red or Suzuki racing metallic blue and will be in UK dealers in late Spring. 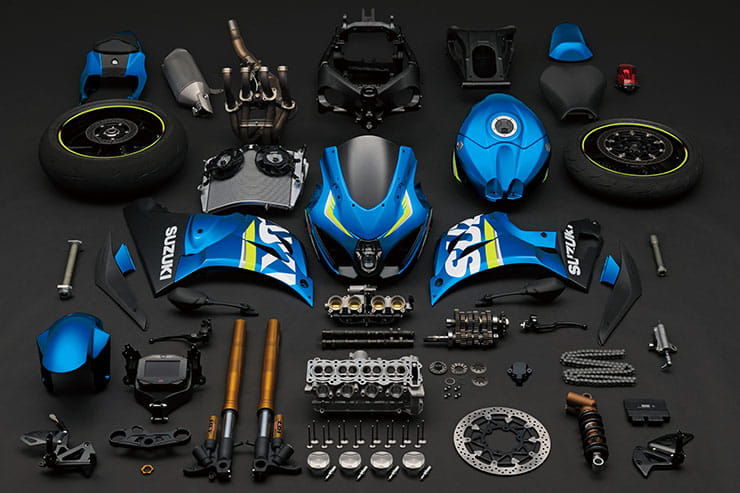