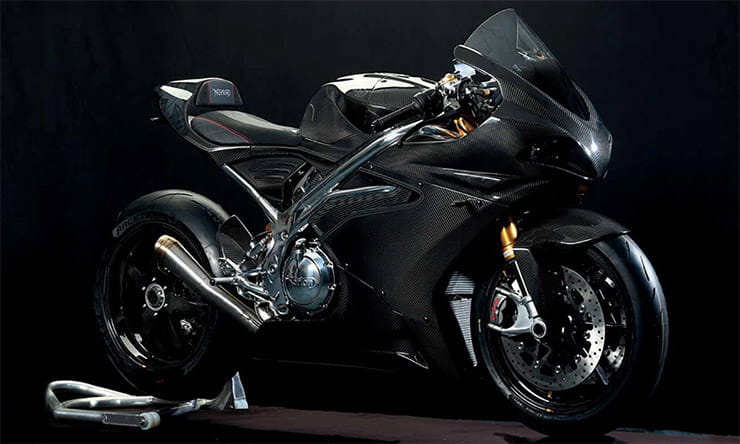 Norton has revealed official pictures and specifications of its new V4RR ahead of it’s launch at Motorcycle Live on Saturday.

The boutique British manufacturer claims a power output of over 200bhp from it’s in-house 72-degree 1200cc V4 engine, with a dry weight of 179kg for the carbon fibre clad £28,000 superbike.

Norton’s design remains elegantly British, no doubt inspired by car brands such as Aston Martin and Jaguar, and there are strong elements of Triumph’s Daytona T595 and 675 in the styling and frame design, albeit in a more contemporary manner.

The information, which is on Norton’s corporate website, states that the engine (which was pictured on Norton CEO Stuart Garner's Instagram feed) features a bore and stroke of 82mm x 56.8mm and has constantly variable inlet tracts and independent throttle systems on the front and rear banks of cylinders – no doubt to deliver maximum feedback and control to the rider.

As we’ve come to expect from a modern 200bhp superbike, the V4 RR will be endowed with cutting edge electronics and will have three riding modes, multi-setting wheelie, traction and launch control, as well as full datalogging to record everything from lap times to braking forces and lean angle. Display is a highly modern 7” HD display.

Suspension comes from Ohlins at the front and rear, with radially mounted Brembo brakes and forged aluminium wheels. Bodywork is full carbon fibre, with an aluminium frame and single sided swingarm, although Norton are listing a full titanium race exhaust and carbon fibre wheels as options, which should increase power and reduce weight accordingly. Also listed as an option is the TT-style chrome bodywork (pictured below).

It’ll all be at Motorcycle Live for you to see yourself from this weekend.