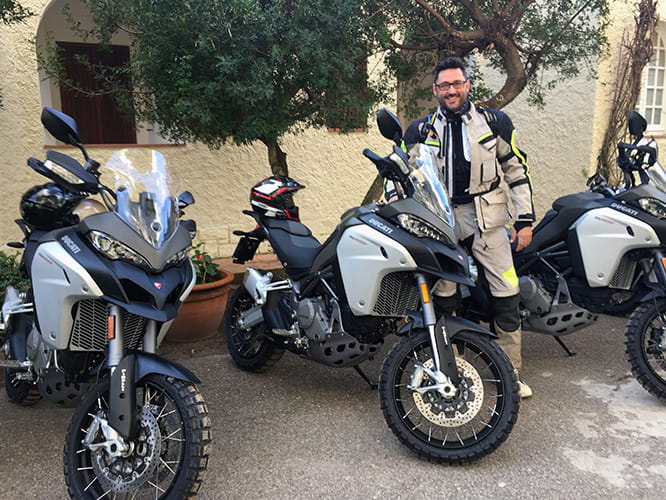 Take a standard Ducati Multistrada 1200. Lock it in a crate for a few months while feeding it steroids and bowls of attitude then release it to the world. What you end up with is the hardest-looking Ducati ever. Meet Ducati's new Multistrada 1200 Enduro which we've just ridden at the world launch in Sardinia.

A blown-up over-the-top fully-pumped Ducati Multistrada 1200 Enduro – a bike designed to go where no Multistrada has ever been before, and to go head-to-head with the BMW R1200GS-A and KTM 1290 Super Adventure. 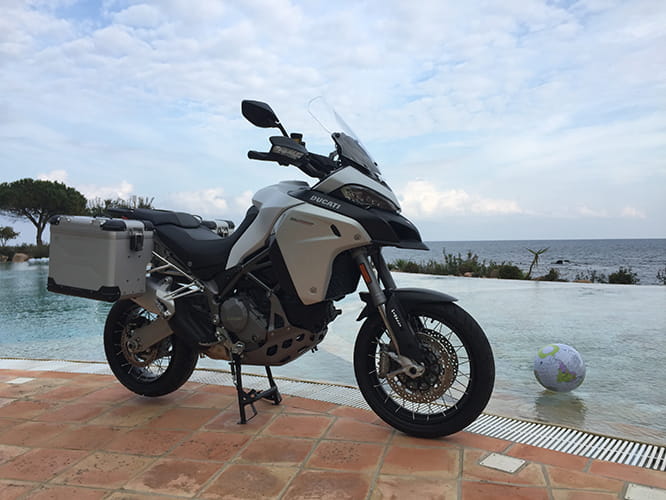 The current Ducati Multistrada has always claimed to be capable of riding off-road, when actually the 17-inch front wheel means it struggles off-road, as I’ve found on the three 1200 Multistrada's that I’ve run over the years. But this is designed to be the true go anywhere Ducati. They’re certainly confident and have invited Dakar finisher Llewellyn Pavey as one of the UK journalists to test the bike alongside me and the rest of the exclusive list of UK journalists at the launch in Sardinia to test the bike today. If anyone can test it, he can. 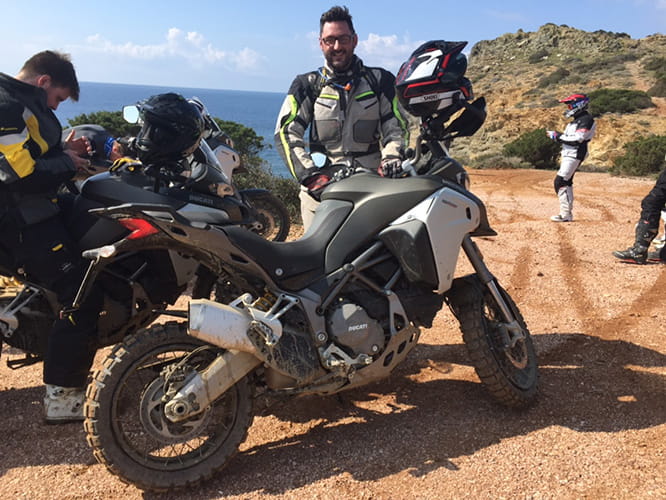 Stand next to the new Multistrada 1200 Enduro and you can see the physical, all dominating size and presence of this behometh of a Ducati. It breathes awesomeness before you even sit on it. Parked up in the Sardinian sunset at the launch the bike looks just like it could ride itself off into the sunset and never come back. The theme of global adventure for this bike is big with Ducati claiming it is ultra-reliable and built to take  on the world. The launch base is scattered with globes and signs pointing towards the Isle of Man, Ushuaia and of course Ducati's home in Borgo Panigale.

It certainly has the right specs for it.

"If you've ever ridden a Multistrada and thought 'I really wish I could take it off-road' but couldn't, then the new Multistrada 1200 Enduro is the bike for you. It's got massive presence, it's huge, it's a pumped up Multistrada with loads of attitude.

"We've ridden it for around 50km off-road this morning and you would have got around on a standard Multistrada but you'd still be there now I think!

"The bike is 100 horsepower in Enduro mode with traction and ABS turned down low. And the traction works really well off-road but if you're a bit more experienced you might want to set the engine map to the full 160 bhp and letting the rear slide and let the thing really get its nose out. It's early days but I have to say I'm really in love with the Multistrada 1200 Enduro"

We’ve got a full day riding ahead of us and will get a full report online as soon as we can. 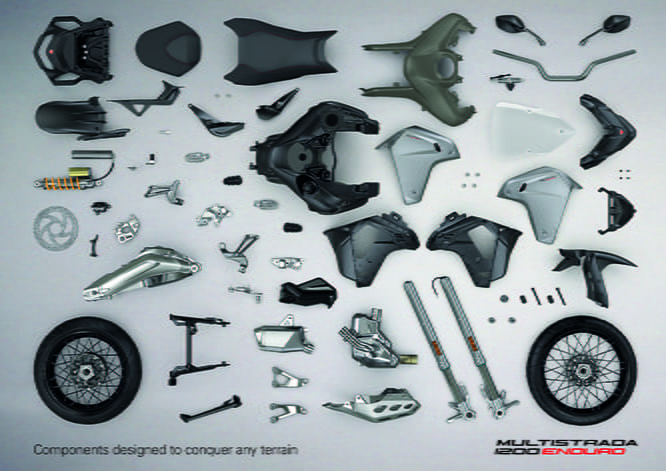 The bike may still be called a Multistrada and use the same basic frame, same basic riding modes, and 160bhp Desmodromic Variable Timing (DVT) motor, but this is a very different bike. As well as the changes we already mentioned, the Multistrada 1200 Enduro gets:

As you can imagine, a host of optional accessories and different packs are available to customise the bike to your own preference.

Come back later for the full review and pictures when we've done a proper day's riding on the bike.

For more information and details of Ducati's range of TriOptions finance offers have a look here.