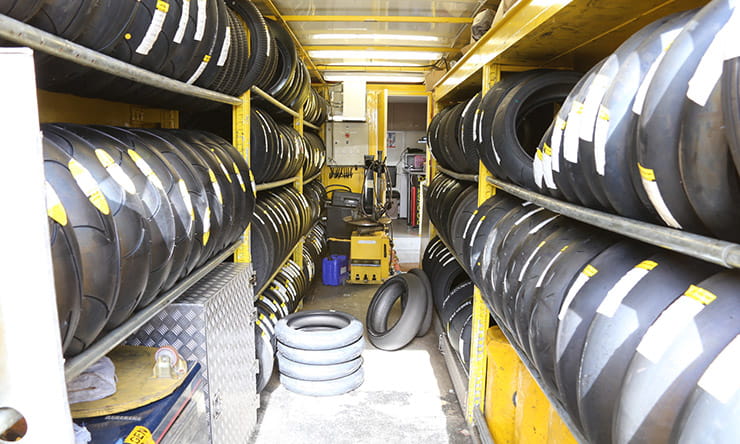 Secrets of Dunlop’s TT tyres: they powered Michael Dunlop to the outright TT lap record in 2016 which then prompted Hutchy to switch from Metzeler.

Last month on a freezing cold day Dunlop, along with Honda, were at Castle Combe for vital pre TT testing.

It’s vital because of the proximity to when the likes of Guy Martin, Bruce Anstey and Michael Dunlop will be flying down Glencrutchery Road at 160mph. And vital because - of all the components on a bike - few things are as fundamentally crucial as tyres.

But the TT is not new to Dunlop. In fact, the tyre company has been involved with the event since the very first TT in 1907.

Dunlop’s prowess at the TT is reflected in the sheer amount of records it has achieved. Bob McIntyre broke the first 100mph lap on Dunlops 60 years ago and since then the brand has claimed the absolute speed records of 127mph, 128mph, 129mph, 130mph, 131 mph, 132mph and 133 mph.

It was also on Dunlops that Michael Dunlop (no relation), cracked the first sub-17 lap. So what’s the secret? 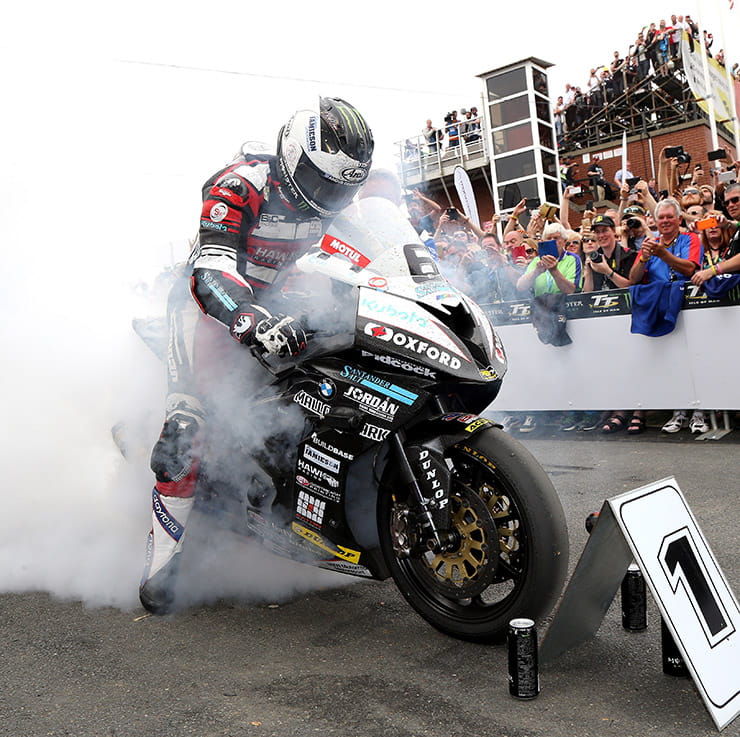 Strictly speaking the secret is in fact, a secret but Dunlop’s Event Leader for Motorcycles, Pat Walsh sheds some light on the company’s tyre development for the Isle of Man TT Races.

“We take a tyre back from riders after the TT and the Classic and inspect them. The used tyres provide material for feedback and are examined in terms of how they have performed,” said Walsh.

The feedback from these heavily-worn bits of rubber are used to develop the following year’s tyre, so that year-on-year Dunlop tyres are constantly evolving.

But while developing tyres capable of speeds exceeding 200mph on 37.73 miles of public road is far from easy, it provides an efficient testing ground for the company’s products.

The TT circuit has all the variables of a normal road, such as cat’s eyes, manhole covers, kerb stones and changeable surfaces. That, with the volatile Manx weather thrown in, makes for the perfect tyre test bed.

In fact, the TT has had a direct influence not only on the tyres themselves, but on the methods that enable Dunlop to develop those tyres.

The high speeds of the TT course have helped create Dunlop’s Jointless Belt Construction (JLB) technology, which reduces tyre growth due to centrifugal forces at high speeds from 15mm to 3mm. This creates smoother handling and straight line stability - essential for long stretches such as the Highlander (the former home of the speed trap).

As Walsh says: “You need good straight line stability at the TT. A TT rider uses the centre of the tyre an awful lot whereas at short circuits sides are used more often.”

In theory, this would mean that the sides or ‘shoulders’ of the tyres cool down much faster and thus lose grip on the corners. But Dunlop have sussed that bit out too, by using different compounds for different parts of the tyre. This creates a ‘best of both worlds’ scenario (essential for the TT’s wide-ranging circuit), which features a centre compound that’s durable with a softer compound providing more grip through corners. Thus, grip is maintained through the long stretches into the sharp corners, such as the sharp right-hander that follows Sulby Straight.

Tyre use also varies from rider to rider. “Some are more aggressive and some are smoother. We always knew which tyres belonged to TT racer Keith Amor just by glancing at them,” says Walsh. “And riders are particularly aggressive at the North West, there’s a lot of hard braking and early accelerating and you can see all that in the tyre.”

Dunlop’s tyres are developed in a lab at the company’s major centres in Germany, Japan and Luxembourg. “There are R & D specialists and every year the tyres get better and better. We got the first sub 17 minute lap last year and I know people who doubted whether that was possible.”

But to ascend to the upper (faster) echelons of TT racing, good tyres are a must.

“To reach top speeds on the Isle of Man you need three things - and each one of them has got to be right. You need a good rider, a good bike and good tyres. If you’ve got all three, great, if you’ve got two out of three, you're lucky, if you’ve only got one out of three of them, don’t turn up.”