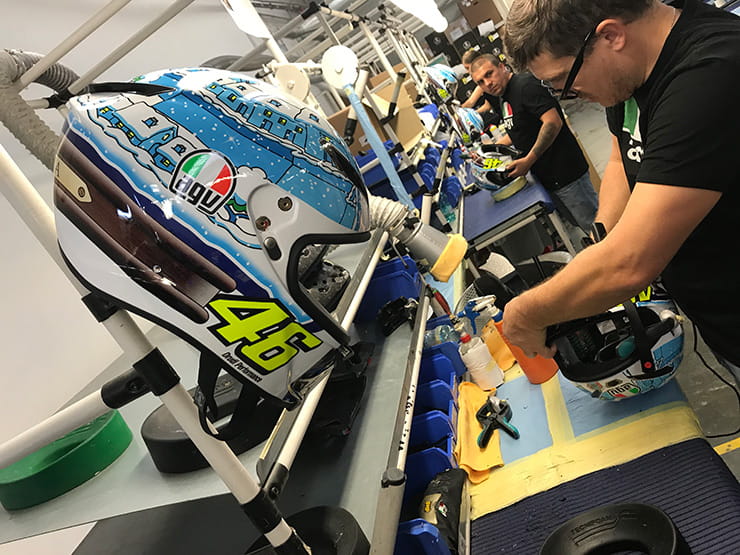 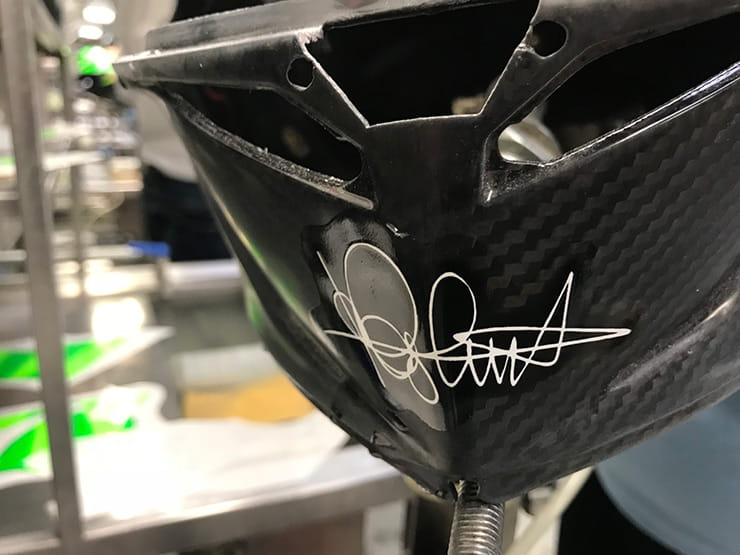 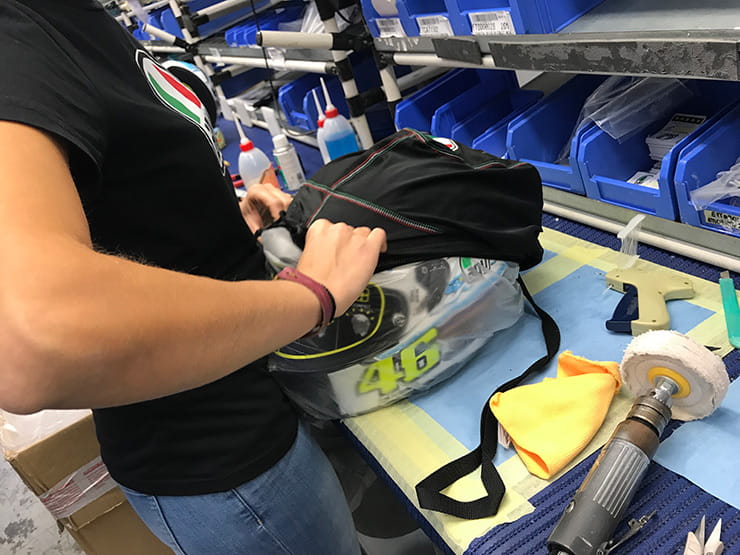 Where are Valentino’s helmets made?

In Northern Italy between Vicenza and Padua among fields as far as the eye can see sits the quiet, almost deserted town of Mavet. Not much happens here – except in an unmarked warehouse nestled in between half-a-dozen others where lies the production plant where Valentino Rossi’s very own AGV MotoGP race helmets are created. That and the several thousand replicas ready for world-wide distribution.

That said, the Dainese-owned company who have been making helmets for 70 years, produce only the two most sporty full-face helmets - Pista GP-R and Corsa-R in this factory. But how do they get from the carbon fibre shell to the limited Valentino Rossi Mugello edition helmet? BikeSocial got exclusive behind-the-scenes access to follow the process from the moment the carbon shell arrives in the factory through to being boxed up and ready to be sent to the retail shelves around the globe.

At the time of our visit towards the end of the 2017 MotoGP season the factory were producing two Valentino Rossi replica lids – the football-field inspired Mugello helmet featuring a Rossi character (with a band-aid above his right eyebrow) about to take a penalty. In a speech bubble he says “Mo Je Faccio Er Cucchiaio…” which translates to “Watch me chip this one” in English, a line uttered by Italy’s national team captain, Francesco Totti in the Euro 2000 football championship. The helmet is dedicated to the recently retired Totti and more significantly, his famous ‘46’ race number merges into the equally famous ‘69’ of Nicky Hayden’s on the chin bar in tribute to the late, great American.

The phrase ‘Un capitano…c’e solo un capitano’ or ‘One captain. There is only one captain’ appears across the rear of helmet over the colours of the Italian flag – again, another reference to Totti of Roma.

Also being produced at the time of filming was Rossi’s winter test helmet – another limited edition run featuring a snow scene and the name of his home town of Tavulllia.

Both helmets have a retail value of £1,100 and include a hydration system which is fitted on the final stage of the production line along with the internal components such as the headliner and chin strap. The final stages of the production doesn’t take four people more than 15 minutes but it’s the application of graphics and lacquering that can take up to three days depending on how complex the design is. 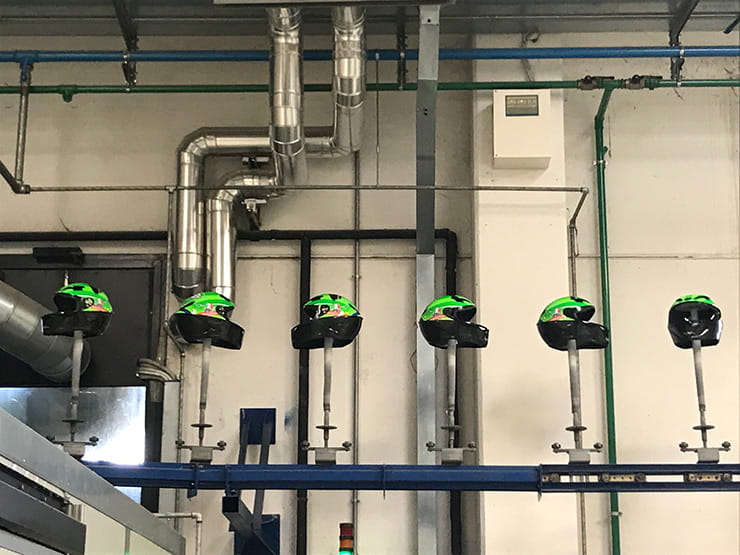 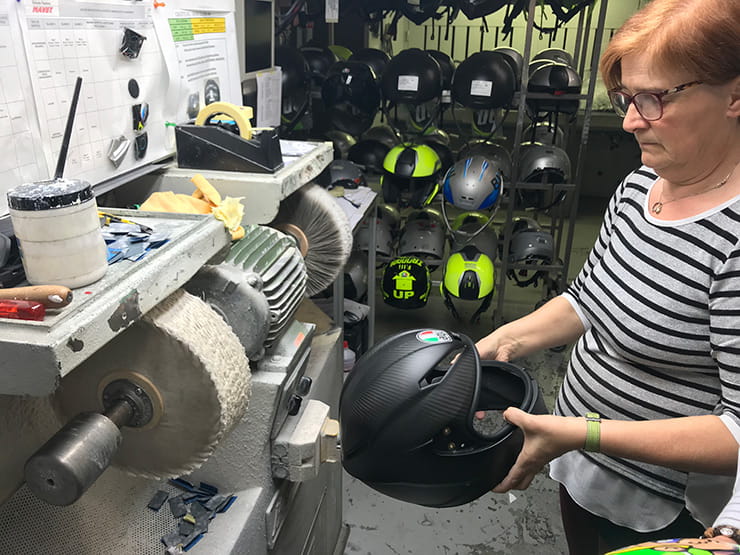 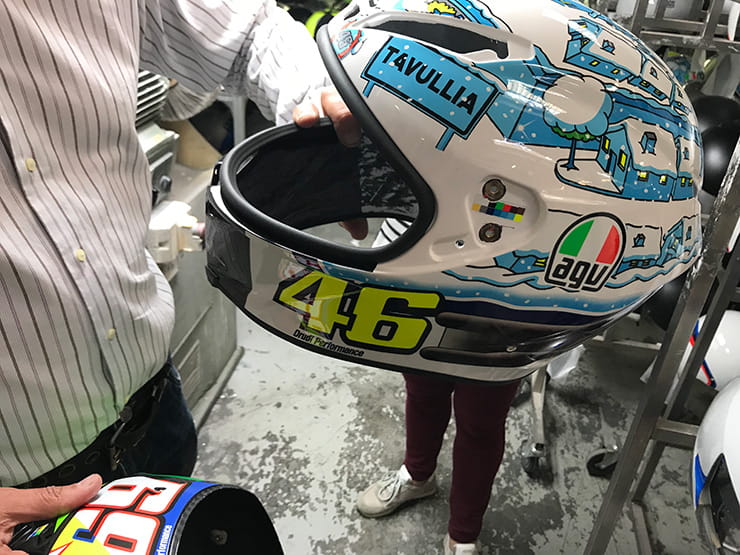 “Welcome to Mavet in Northern Italy and we’re here inside the AGV factory where they produce the Corsa-R and the Pista GP-R. The only legal requirement for us to all be riding motorbikes in the UK is to wear a helmet, so we’re here to find out how the AGV helmets that keep you and I safe on the roads are produced.

From when an external supplier delivers the carbon shell, how does it get from that, to this? This is the Valentino Rossi Mugello 2017 Limited Edition helmet and the process takes several days.

So, after it’s been delivered here to the factory in this condition it goes to bay number one where a lady takes what is pretty much a scrubbing brush and just prepares the surface to have the primer layered on to get it ready for the graphics to be applied to the helmet. The Valentino Rossi graphics are quite complex – it’ll take three days. Each step of the process features a primer, then the graphics - like the football field - are attached, then the process is repeated depending on how complex the design is. Once the graphics are all finished and the lacquer is applied and it’s prepared it then goes to the next bay for quality control checking and the helmets first weigh where it has to fit within a minimum and maximum regulation.

It then has the rubber seals put in around the visor and bottom of the helmet. It then gets transferred to the final four-part process where all the insides get inserted – from being scanned with a barcode to stop counterfeiting, the inserts over the helmet, the chinstrap gets riveted in before the final edition which gets boxed up and sent out to the retailers.

AGV have been in business since 1947 and are celebrating their 70th anniversary in 2017, that means there’s a whole lot of history and development in order to keep you, me and this bloke <points to Rossi’s cartoon character> safe on the road…and the track.” 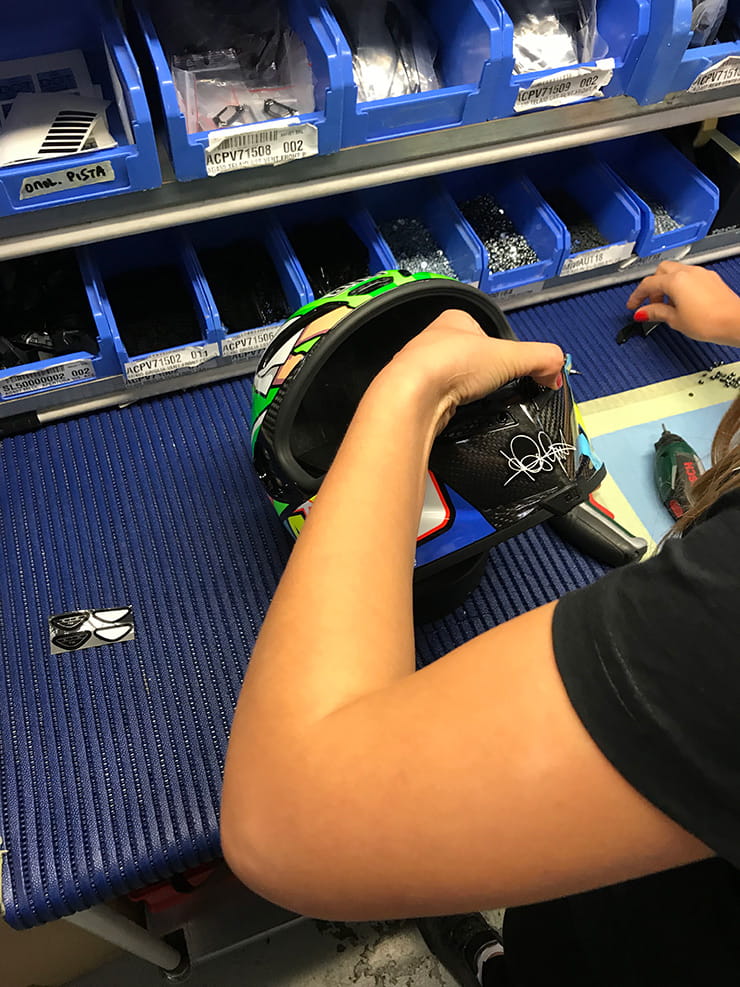 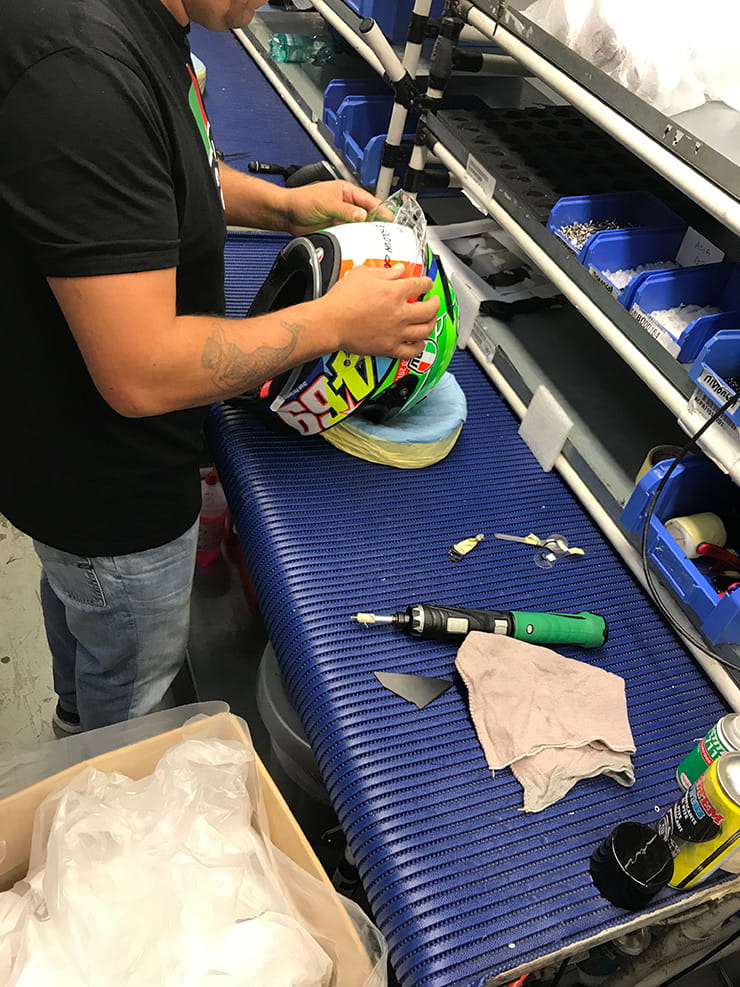 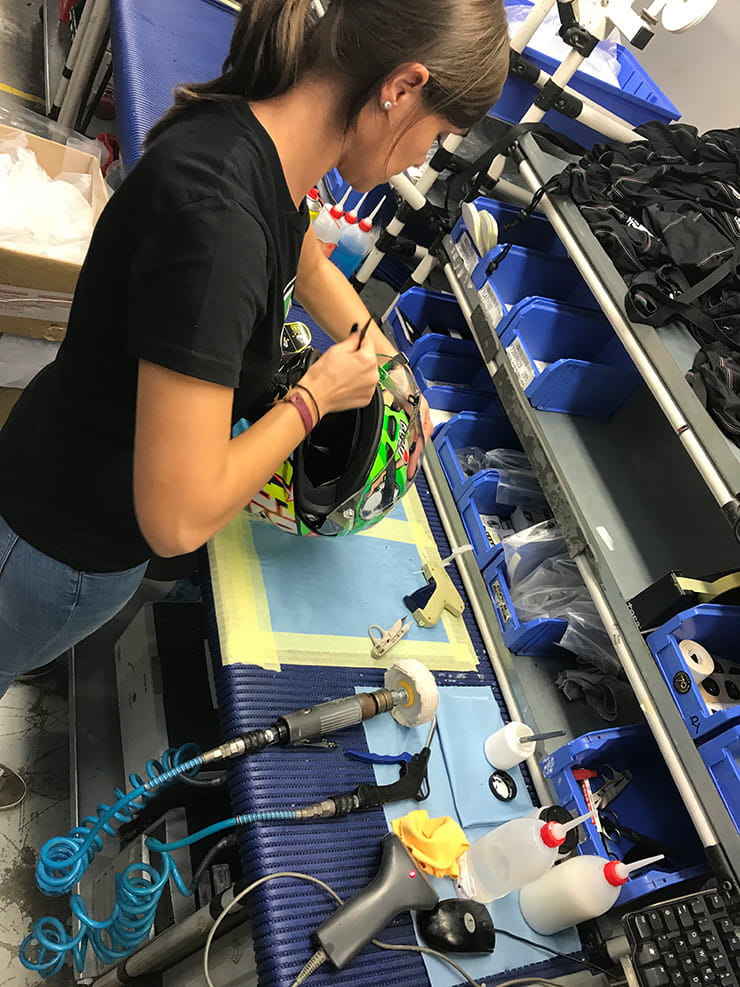