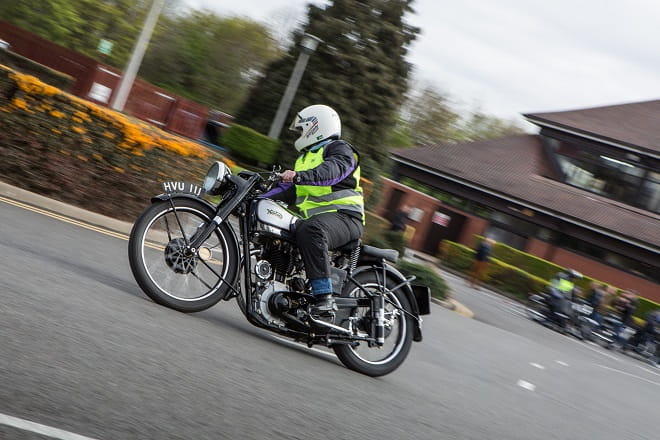 Imagine if you could walk into The Louvre art gallery in Paris, grab the Mona Lisa, take it home and hang it above for fireplace for a day.

Well, it might not be the Mona Lisa, and it’s definitely not Paris, but the National Motorcycle Museum in Solihull has started a scheme that’s the motorcycle equivalent of just that.

The Museum’s ‘Friends Scheme’, which anyone can join for £30, offers its pals the chance to ride some of the museum’s most prized machines for a day, for a fee depending on the machine.

The scheme - known as National Motorcycle Museum Classic Bike Tours - started this month with five ‘friends’ on machines including a 1949 Vincent Black Shadow, a 1947 500cc Norton International, a 1962 BSA Rocket Goldstar, an SOS and a Brough Superior SS100, arguably the world’s first superbike.

So it’s not surprising that those taking part in the inaugural tour were somewhat excited, especially Tracey Messer, riding the 1947 Norton International.

“I’ve always wanted to have a go on an old British bike and I’ve always loved Nortons,” she said.

“I have a Suzuki Gladius 650cc but I’ve never ridden anything like this before.”

Not many people have. The machine was once owned by George Formby OBE, the hero in the 1935 TT spoof ‘No Limit’. But even for a film star, the bike was a precious acquisition. It was presented to Formby after him and his wife Beryl took a tour of the Norton factory to take part in its the lunchtime radio show, Worker’s Playtime.

Museum director James Hewing said: “After the war the government introduced an ‘export or die’ policy, which was aimed at prioritising exports over domestic sales in order to boost the nation’s economy. A new machine would have been just as hard to procure for George Formby as it would have been for anyone else in the home market. One could only imagine that Formby’s celebrity status persuaded Norton to bend the rules on that occasion.’

In this case, it was his appearance on a radio show.

On hearing of the bike’s provenance before setting-off, Messer said: “It is incredible that I’m able to ride something like that this though I’d rather not think about how valuable it is right now.”

But after the first session on the open roads, she was a lot more relaxed.

“It’s brilliant,” she said. “There are a few oddities - the brakes on this old bike aren’t as efficient as those on my Suzuki and the gearing’s a bit strange but what an amazing experience! The sounds and smells are incredible - you just don’t get that one a modern bike.”

The unconventional scheme is part of the museum’s drive to bring its whopping 1000 machines to life - making sure its inventory is seen, heard, and even smelled in action.

Hewing said: “When launching our Museum Friends’ scheme it was crucial for it to have content that really captured people’s imagination. Giving our Friends members the chance to ride motorcycles like the Norton International, the Vincent and Brough Superior does just that.

These are, after all, machines that most people would never get the chance to ride. We want to give them that chance.” He said: “It’s important that the museum is seen to be a living, dynamic thing, not a dry place which is just rows of  headlamps. Giving Friends of the National Motorcycle Museum the chance to ride some of the most famous and iconic bikes in the collection will help to dispel that perception.”

It did for Roger Payne, riding a 1962 BSA Rocket Goldstar. He said: “I’ve always wanted one of these - right from being a young man and to be here doing this is just brilliant. I’m ticking off one of the things on my bucket list.” 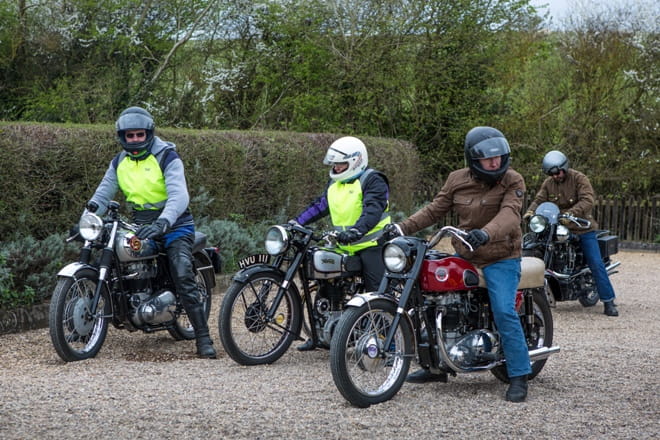 But there were teething problems on the day, which the museum aims to iron out. The ‘superbike’ machines, such as the Vincent Black Shadow and the Brough needed faster roads, for example.  Hewing said: We are going to start looking at running separate events for machines under 500cc and those over 500cc. We also want to offer people the chance to change to a different bike at lunchtime.”

The National Motorcycle Museum’s Bike Tours scheme is not quite same as taking a Mona Lisa home, in fact, it’s even better - it’s the Mona Lisa with wheels, running on Castrol R, and making awesome sounds.

The museum’s next bike tour is in August but for now, it’s concentrating on its ‘workshop day’ this Saturday, 2nd May, where ‘Friends’ can meet the museum’s restoration team.

For details on becoming a ‘friend’ of the National Motorcycle Museum email friends@thenmm.co.uk or call 01675 443311