Michelin are back in MotoGP next year, and back with a range of new hypersports tyres to match the latest breed of 200bhp sports bikes. We rode on the new Power road and track tyres at Mugello, Italy to see how good they are. 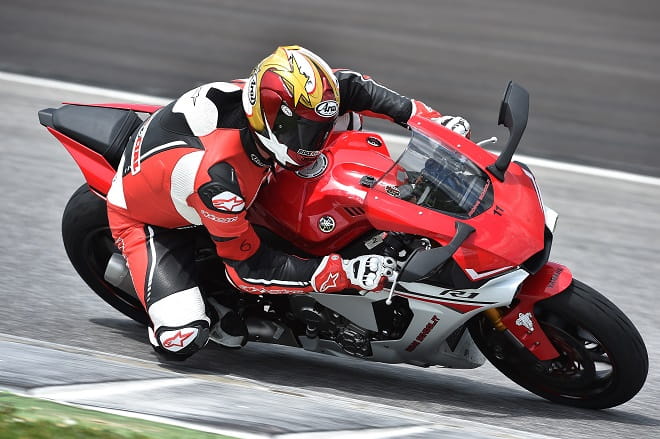 The latest breed of hypersports bikes like Yamaha’s 2015 YZF-R1, Ducati’s 1299 and BMW’s S1000RR all make in the region of 185-192 rear wheel horsepower. That kind of power, combined with the latest electronic systems like ant-wheelie, cornering ABS, and slide control mean that sports bikes you can buy for the road can outperform a World Superbike of ten years ago.

They lean harder, accelerate faster, and stop quicker than any road bike in motorcycling history. Riders need to be fitter to ride them fast, tyres need to work harder. Traction control only works so far, and 200bhp bikes need the rubber to match.

That kind of abuse requires a special set of tyres to keep it all in check, and Michelin reckon they have the answer with their new range of Power tyres.

Confused? Yes, me too, but we’re just concentrating on the more track-day focussed Power Cup Evo and road and track biased Power Supersport Evo which we got to try on a Yamaha R1, and a new Aprilia RSV4RF for comparison, at the beautiful flowing Grand Prix racetrack at Mugello in Italy. 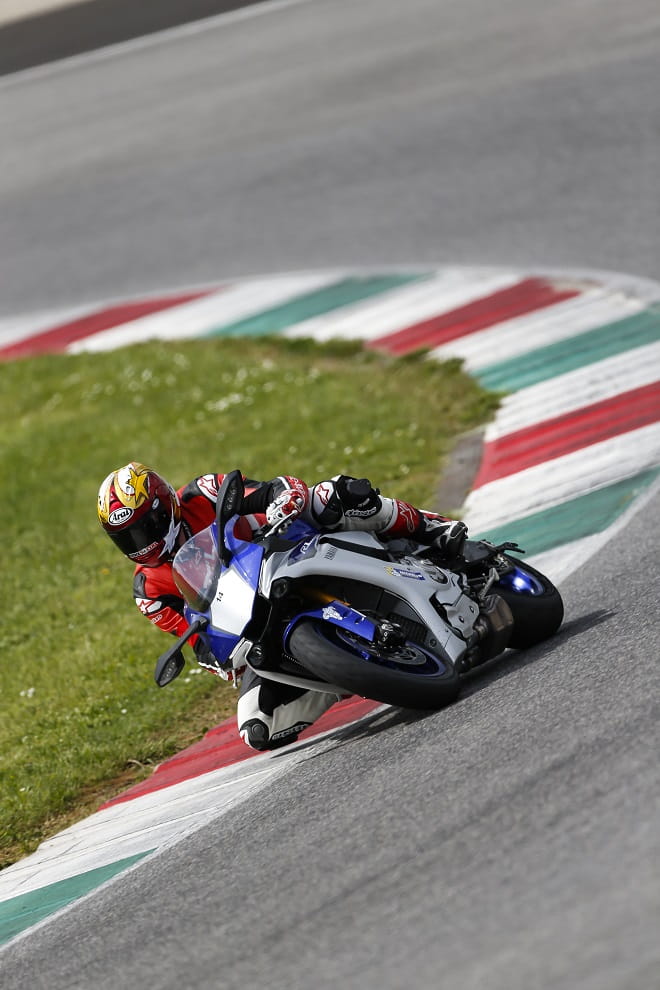 Designed to give decent track performance for the occasional track day rider, the Power Supersport Evo’s are designed to work on the road and in wet or dry conditions.

It has a new compound over the old Power Supersport tyre and new Adaptive Casing Technology (ACT) which includes a new design of dual ply which crosses over at different angles to allow the tyres to be plush in the centre, or the crown of the tyre, and be more rigid on the sides of the tyre for cornering feel.

I rode the new tyres on an Aprilia RSV4RF and a Yamaha R1 and although they’re edging more towards an impressive road tyre, rather than an all-out track tyre, they easily cope with 200bhp abuse on track.

At the limit the front gave good feel and side grip, but even with traction control you could push the rear tyre to slide. The rear would be much more suited to a 600cc motorcycle and on the road they’ll no doubt be fantastic.

On the brakes the tyre felt good and stable, and they were also stable on the 180mph straight. Like all Michelins you could feel a nice secure plush feeling with a slight bounce from the tyre when riding over bumps.

Yes, you can find its limitations on track, but as a brilliant road tyre that you may occasionally use on track the Power Supersport Evo’s are right up there with equivalent Pirellis and Bridgestones. 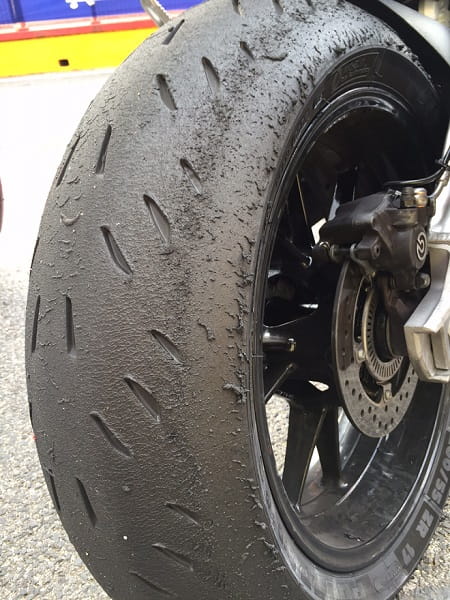 Michelin’s road-legal Power Cup Evo is the choice of the Michelin range for anyone who wants a serious track day tyre that’s also road-legal.

It was developed in conjunction with the Spanish Superbike Championship using the 25 riders in the championship for feedback.

We got to ride on the new tyre on a couple of new Yamaha R1’s, and the difference to the Supersport tyre was noticeable immediately.

Switching to the grippier Power Cup Evo on the R1, the bike instantly felt happier riding harder on the front tyre with increased feel from the front, and way more lean angle. It allows you to run much deeper into turns and really work the front hard.

Michelin say the tyre works from a wide range of temperatures from 5 degrees to 30 degrees. It certainly coped with the 22 degree heat at Mugello.

Compared to the Power Supersport Evo tyre, the way the front digs in on some of Mugello’s fast sweeping off-camber corners is impressive. You can get near-elbow down angles of lean and still get feel from the front tyre. It allows the bike to turn much faster in some of the second gear chicanes too. Edge grip at full lean is impressive. 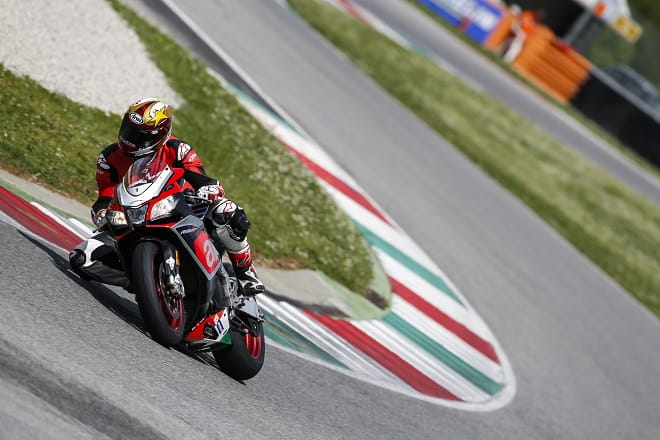 Mid-corner feel is vastly improved and pegs down riding on the Yamaha YZF-R1 was a regular occurrence.

On the straight, at 180mph as the bike rises over a crest, the bike was still stable, and stable on the brakes too at the end of the straight before peeling into the second gear turn 1. It’s slightly more lively on the way in to the corner too.

On the rear there was way more grip, and you could put all your faith in the traction control and nail the rear right off maximum lean angle. It bites in hard and powers out of the corner leaving big black lines on the exit of turns with impressive feel. All-in-all the tyres were worth around 3 seconds a lap over the Supersport tyre. As a choice for serious track day goers you won’t go far wrong.

If you wanted to take it to the next level and you’re a racer, Michelin also offer a range of tyres available from motorsport suppliers. The tyres are called Power Slick Evo, and Power Cup Ultimate.

Some of Michelin’s previous sports tyres never quite gave the feel of some of the best sports tyres from Bridgestone, Dunlop and Pirelli, but these new tyres are right up there with the best and stickiest tyres on offer. I can't wait to try them on the road. 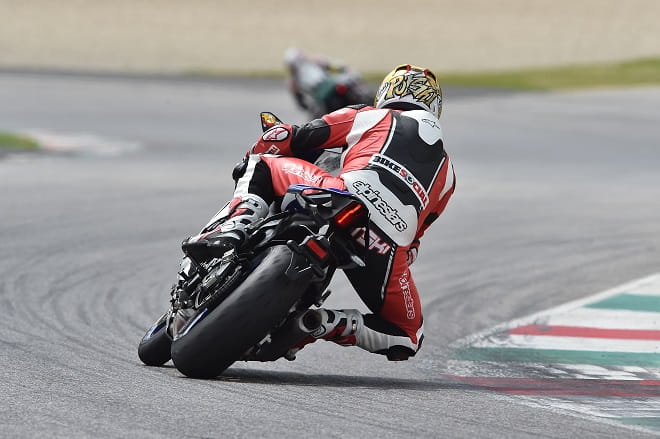