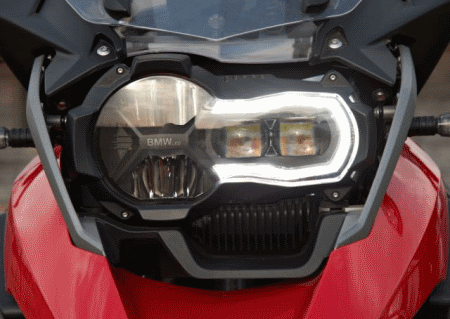 The use of LED lighting is no longer restricted to pocket calculators, watches and mobile phones. Everywhere the common bulb, or ‘lamp’ as it is better known, is now rapidly being replaced with cost effective, low-maintenance and efficient LED systems. This is partly due to EU legislation banning inefficient incandescent types of lamps and the least energy efficient clear lamps. This has led to LED technology and application moving forwards at almost, well, the speed of light. This is particularly true when it comes to safety, a subject that BMW Motorrad knows more than one or two things about.

BMW Motorrad, as we know, is renowned in equal measures for producing fantastic motorcycles and innovative design. A common denominator from this technical marriage is the aspect of safety. One of the latest safety innovations from the BMW Motorrad team is the use of a fully LED integrated front headlight as revealed on the new R 1200 GS.

LED lighting and motorcycles is not a new venture – BMW Motorrad itself first used ‘angel eyes’ LED technology in the C 600 Sport and C 650 GT Maxi scooter bikes, and for the ‘light rings’ of the K 1600 range – but it is the first time a motorcycle can now be ordered ex-works with LED DRT (Daytime Riding Light), and LED low and high beam operation. Incidentally, the GS version of light rings or angel eyes is a horizontal ‘U’-shape, which will be used to represent the GS range.

Incorporated into the R 1200 GS headlight are four main LEDs (two each for low and high beam) and a further four LEDs for DRL and sidelight. At the same time, BMW Motorrad engineers built in a sensor and manual override switch to go from DRL to low beam in poor light conditions such as rain or the darkness of a tunnel. So far so good, but what exactly is an LED?

LED is an acronym for Light-Emitting Diode. In the simplest of terms, a diode is an electronic device that allows electrical current to pass through in only one direction with the use of two conductive materials in contact with each other. LED lighting systems will see these two materials inset within a semi-conductor chip. As electrical current passes through the first section of conductive material within the chip its atomic structure gets excited to the point where the material’s atoms are having a private rave party! Because their energy levels reach such a high they shed this energy via electrons that cross through to the other semi-conductive material. 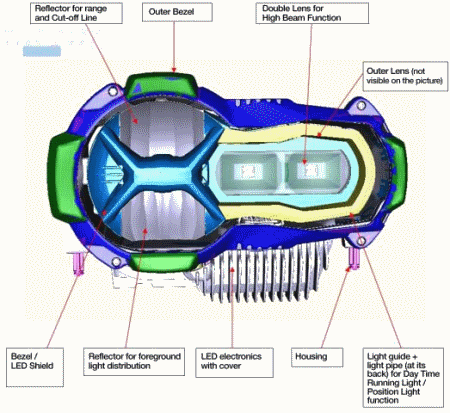 It’s this release of energy that produces light. Different coloured light is produced depending on the materials and methods used in making the chip. Simple? Think spark plug or lightning as the crudest form/demonstration of excited energy being released to produce light. But let’s not forget LED light is considerably safer. The light emitted by an LED can now be aimed and intensified by the use of reflectors and lenses to make headlights that are powerful and offer exceptional visibility, especially when white light is produced.

LEDs, like all light-producing systems, generate heat but because of the enclosed nature of headlights, there is a need to incorporate a heat sink (aluminium-looking block with cooling fins) to draw away the heat via conduction. To assist in stabilising heat build up, BMW Motorrad engineers equipped the heat sink with a radial fan to draw heat away when it reaches a pre-determined temperature. The warmed air is then directed at the headlamp to reduce the possibility of condensation and help in case of ice formation overnight. 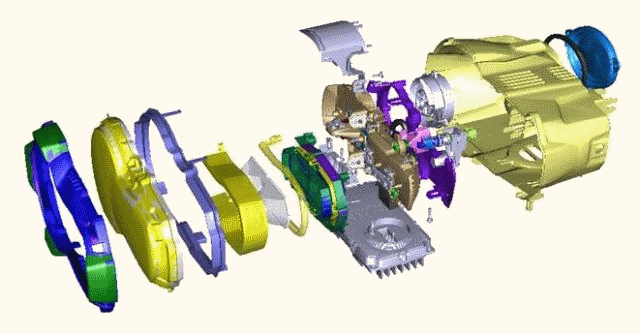 As always, new technology costs money to develop and produce, and to equip LED as standard would see a rise in the R 1200 GS’s affordability. This is the reason for the LED headlight system being available as an optional extra or accessory.

With new technology there is always the worry of change – nobody likes change and motorcyclists are prevalent at objecting to progress that threatens to intrude upon or remove a known quantity from their riding style and dynamics. ABS braking technology is a perfect example

When BMW Motorrad first introduced ABS on a production motorcycle (K 100) in 1988 it was mocked and scorned by people who never rode a K 100, let alone used ABS in a situation that demanded the use of it. But today ABS is now highly regarded as a safety requirement and from 2013 every BMW motorcycle produced will feature ABS as standard.

To help understand LED lighting and what benefit such a system can bring, Sebastien Casenave, Project Leader Development Lighting Systems, BMW Motorrad, answered a selection of questions from BMW Motorrad customers about the new LED system…

Q: It is claimed the LED lighting system produces a greater amount of white light over conventional halogen bulb systems and is therefore a safety aid. What procedure was used to validate this?

SC: An analysis of the spectrum of light sources gave information on how much “yellowish” light or bluish light they contain. ‘White’ LED units were chosen because they are closest to natural daylight and, therefore, are best for illuminated vision. Suppliers and our own testing programmes (in partnership with renowned research and education facility TU Darmstadt) confirmed this decision.

Q: How resilient is the LED system to the rigours of vibrations, road conditions etc, compared to the common “bulb”? Is there a minimum and projected lifespan of the LED light system?

SC: Due to its physics and weight, the LED system is much more resilient than the bulb alternative as far as vibration is concerned. It has been proven and well-documented that LEDs last longer – as long as the lifetime of the vehicle.

Q: When and why was the decision made to use the new LED system? Was it earmarked for the new GS when the bike’s redesign project first started?

SC: Due to the production volumes linked to the new R 1200 GS the idea came to develop a new headlamp adding safety at each and every night ride. LED Technology fits also to the BMW applications of design, technology and safety. The LED system was not planned at the beginning of the project but our lighting department presented it often internally and was able to promote it, working together with the bike’s development team.

Q: How was the new LED design tested – purely in test facilities or actual long-term road testing on the prototype GS machines?

SC: Reliability tests consisted of two phases: laboratory and then physical on-bike testing. Both phases allowed us to learn, fine-tune and to optimise the parts that make up the LED system. Putting the parts on test motorcycles and riding in real conditions – for many thousands of kilometres – allowed us to counter check and enhance previous tests conducted in laboratory conditions.

Q: The use of LED lighting requires the use of a heat sink, why?

SC: LED systems are still quite “sensitive” with temperature increases. They need to be cooled down in order to ensure constant performance and longevity. LED headlamps should provide top quality performance from South Africa to Finland – an operating temperature range of -40 to +80°C. And yes, the BMW LED system more than achieves this.

Q: A fan is used to provide circulating air flow necessary to assist in the conduction of heat. Who had the idea of routing this conducted heat to the front of the headlight to reduce condensation?

SC: A deep and daily common working schedule with our suppliers and internal experts allow us to develop and sometimes patent new ideas. In this case, the common work and analysis of simulations allowed us to make this brilliant decision.

Q: Cost is always a concern for customers, so in the event of damage or LED failure, will a customer have to buy a complete new headlamp assembly.

SC: This depends on the reason where and why the headlamp is damaged. External components are available for replacement. There are only two possible reasons why a problem would occur and these are defect or misuse (damage inflicted by an unknown source). An authorised BMW Motorrad technician will be trained to identify any such event. The electronics and fan unit can be exchanged in case of defect.

Q: What is the combined weight of the LED assembly (heat sink, fan, lens, LED units) and how did BMW Motorrad counteract this weight considering it is placed high and away from the bikes centre of gravity?

SC: Weight is always a subject of analysis and optimisation during the design phase. In the case of LED Headlamps, the long-testing phase on bikes before releasing the headlamp gave very good results without any comments on weight or defects due to the previous design and laboratory stages. The complete weight of the headlamp is approximately 2kg including electronics and cooling system. All components are first analysed during the CAD (Computer Aided Drawing) phase, where dynamics of the bike are also checked, before releasing the necessary tooling. Checking of all the bike’s components is a continuous process from the first design drawings until the first bike produced for our customers.

Q: Did the battery and charging system have to be improved/increased to accommodate the LED system on the latest R 1200 GS?

SC: No. Power consumption is not a drawback of LED systems. In actual fact the use of LED for DRL (Daytime Riding Light) instead of Low beam allows us to reduce power consumption during the day but increase the conspicuousness of the bike

Q: BMW Motorrad will have accessory matching LED fog lights but will customers be able to use existing halogen equipped fog lights with the new R 1200 GS electrical system?

SC: We understand that existing R 1200 GS owners will want to try and retain original BMW Motorrad accessories for use on the new R 1200 GS and, in this case, the answer is yes.

The design and implementation of LED systems in motorcycling will continue at breathless speed. But you can be assured that BMW Motorrad will keep pace with this technology because it can see the way forward. Clearly.