Inside the British Motorcycle Industry: The fine art of custom helmet design 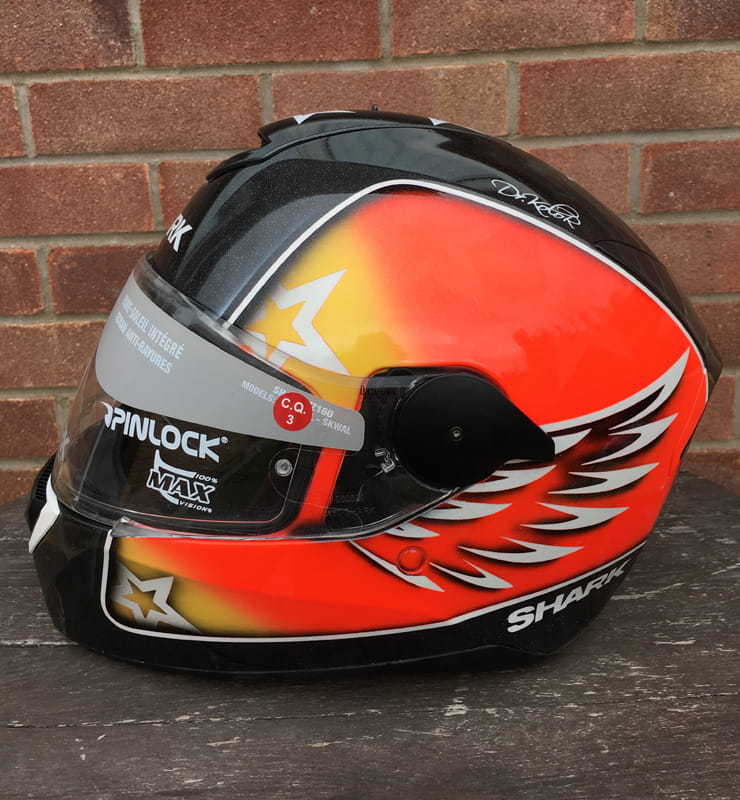 Motorcycles are in the family genes. When we spoke Dylan was not long back from a trip with his Dad to Mugello for the MotoGP. "Dad's always amazed by the way I can  identify individual riders on the grid just from their helmet design," he said.

Dylan’s dream was to be a full-time motorcycle racer. He was competing in the Thundersport Elite class but cost became a limiting factor. All the same, racing led him to start a business following his other main passion, designing and applying colour schemes to crash helmets. He began by painting his own crash helmets. Racing mates asked him to so theirs. In proper 21st century style, he started his business on Facebook. He posted a design on the social media site, it received loads of likes and orders started to come in.

He took a deep breath, sorted himself out professional studio and spray booth then went full time into producing custom paintwork on helmets..

His business has grown through social media and by word of mouth. He has not used any old-style advertising. He added a website last year. "There is a lot of competition," he says but he is happy both with the choice he made and with the way the jobs are coming in.

He's great to talk to, enthusiastic, passionate and fascinated by the stories behind the design ideas that his customers bring to him.

Visit www.drkolor.com to find out what's on offer, the prices and a gallery showcasing some of Dylan's work.

In 2016 to help promote Dr Kolor Dylan set up a competition on Facebook offering a free paint job, worth around £500, to whoever submitted the best design. The winner was decided by viewers' votes.

Long before he joined the BikeSocial team, Chris Newble entered the competition He didn't win but he did make the top three. Dylan Roberts was so impressed by the runners up that he offered them a paint job at cost.

What you see at the top of the page is the finished result and here is how it was done. 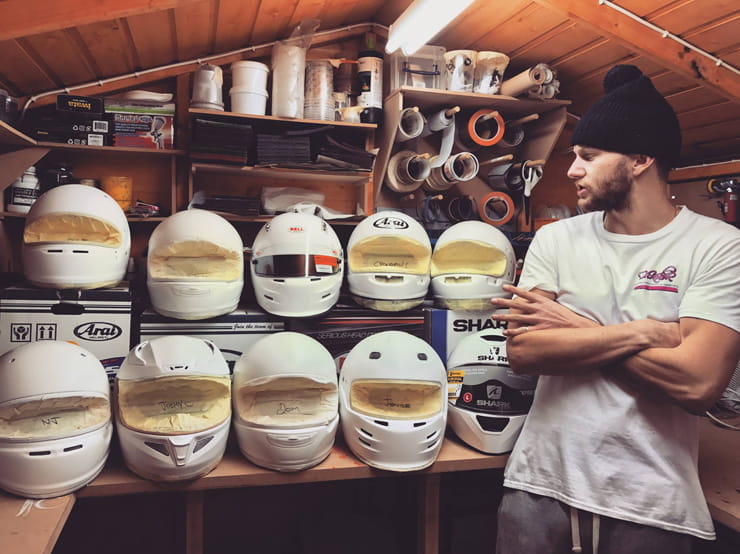 Chris Newble sent his brand new Shark D-Skwal hat to Dylan Roberts Bristol based paint workshop. A plain helmet is the easiest starting point. On the shelves you can see just some of the paints Dylan keeps in stock. He gets a lot of his paint from the USA. "When it comes to paints, they're so advanced, it's amazing," he said. 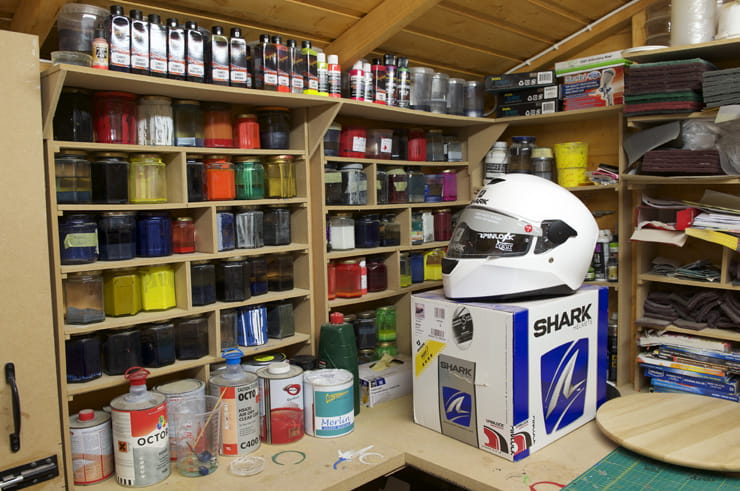 Anything that can be removed is taken off the helmet. It makes more work but the effort is rewarded by a better result than could be achieved if all the detachable components were left in place. Everything remaining which is not to be painted is masked off. 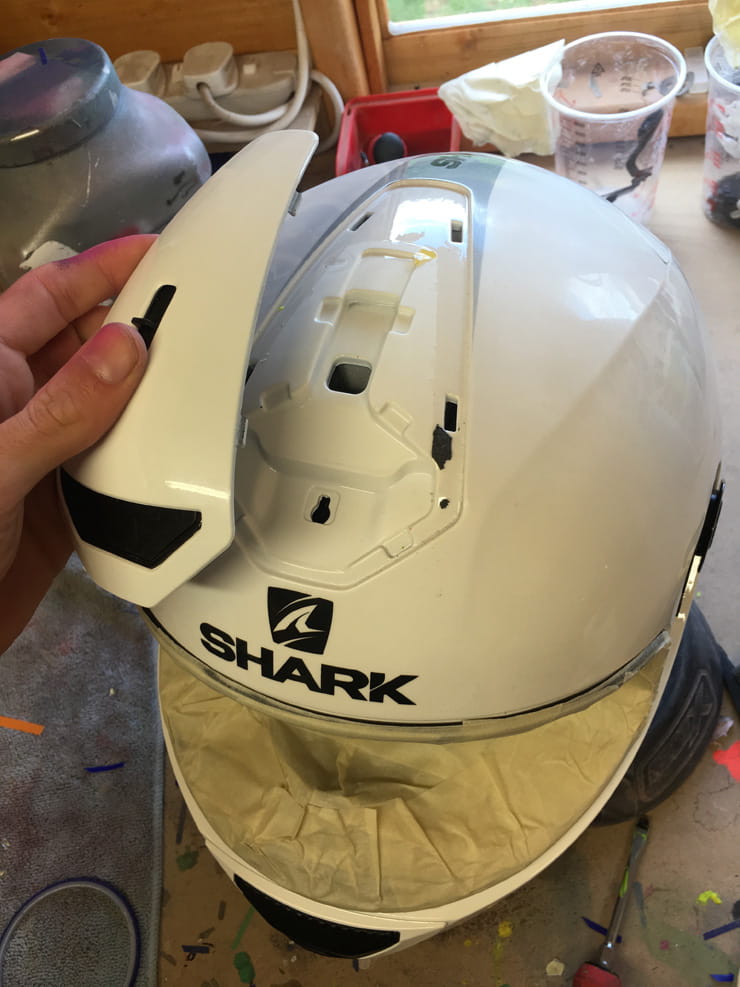 The surface of the helmet is keyed ready to accept the paint. Depending the helmet, Dylan uses either Scotchbrite, as shown here, or fine wet and dry paper. Without keying, the paint would not adhere to the shell. That scar on Dylan's right hand is the result of "a massive highside" at Rockingham which needed plating and several months of painful physiotherapy. 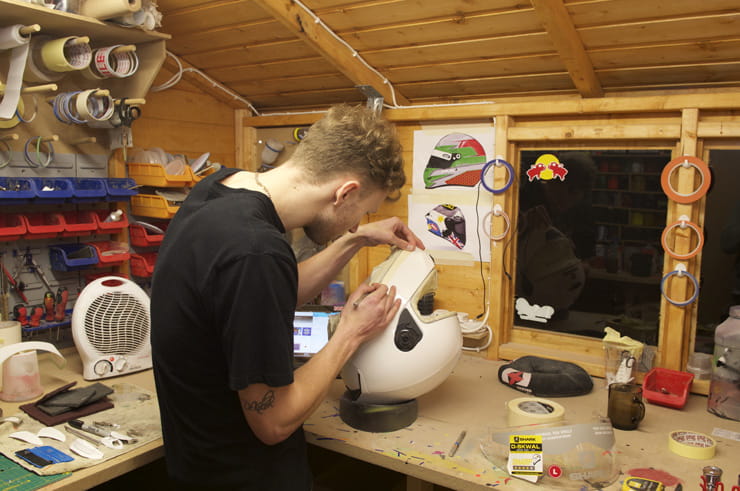 Dylan takes Chris Newble's rough design and starts working it up into a detailed piece of artwork which he will use for reference when painting the helmet. For some of the detail work he will also use the artwork to generate vinyl stencils.  On our helmet, he made the wings like this.

He uses the graphic programs Adobe Illustrator and Adobe Photoshop on an Apple laptop. Here you can see Chris's design taking shape on screen with the helmet awaiting further work next to it. 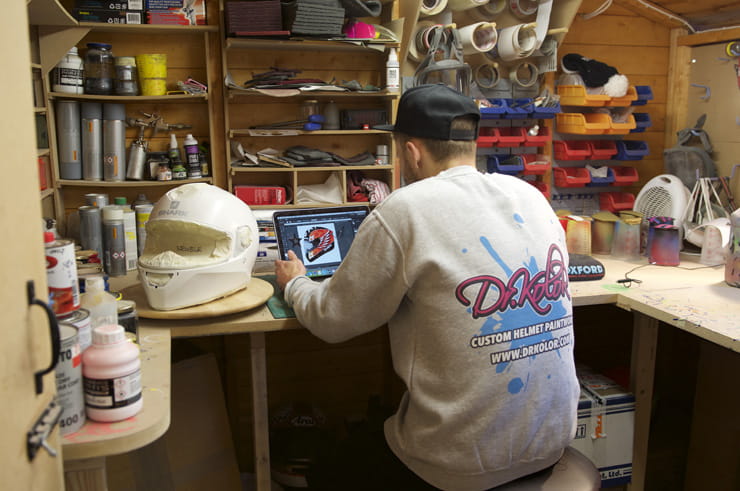 With the finished artwork on to the studio wall as a guide, Dylan tapes out the helmet at the points where the colours separate. "It's hard to pull the tape into a perfect line first time," says Dylan. "It's great when it happens but it often needs more than one go before I'm satisfied." Top quality tape is a must. 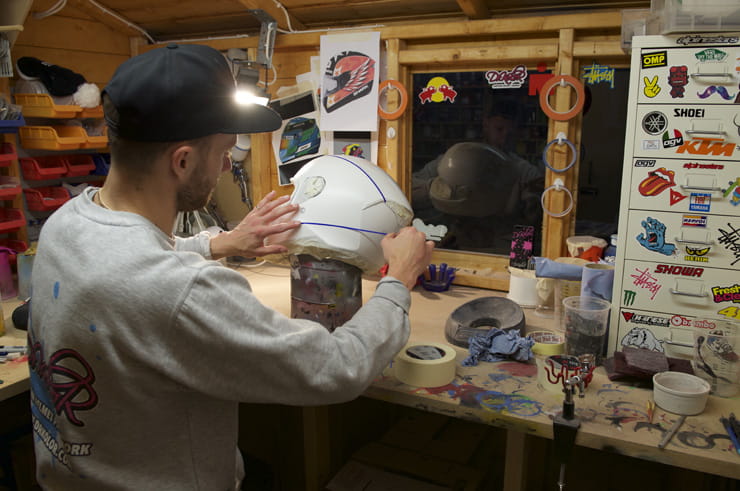 With the base coats of paint applied, Dylan airbrushes in the details of the wings and the remaining detail elements of the design. The removed components receive the same treatment, base coat first followed by masking and airbrushing of the details. 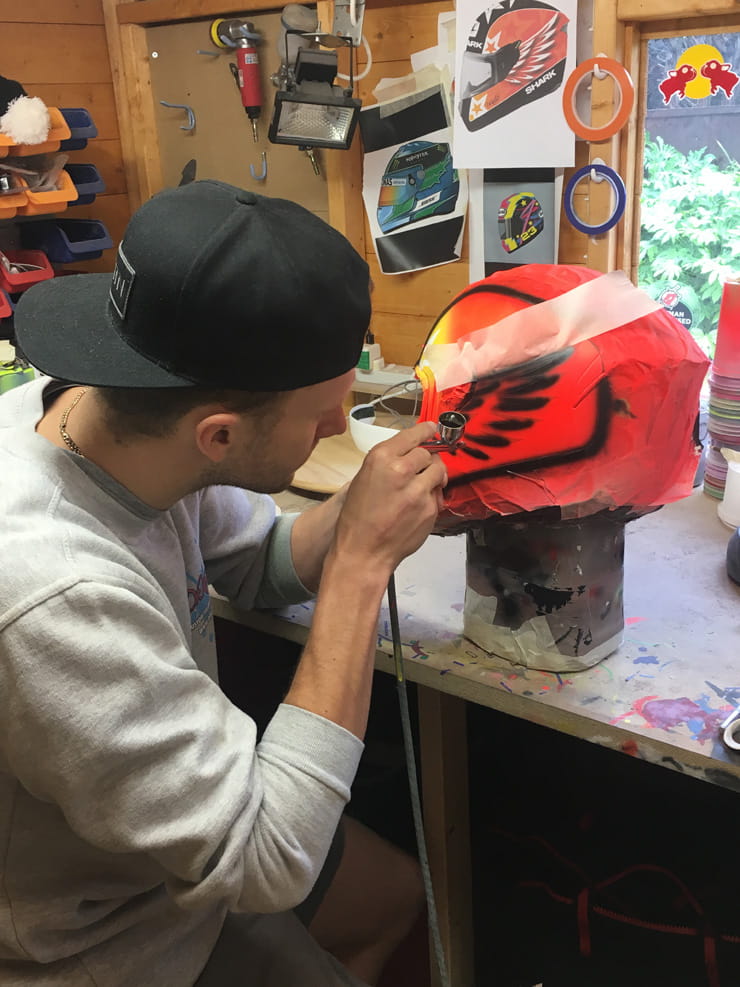 The last painting stage is to apply lacquer to the painted helmet. Dylan Roberts says that almost everybody opts for a gloss lacquer, with just a few people choosing matt or satin finishes. Here you can also see the detached components which have been painted separately. 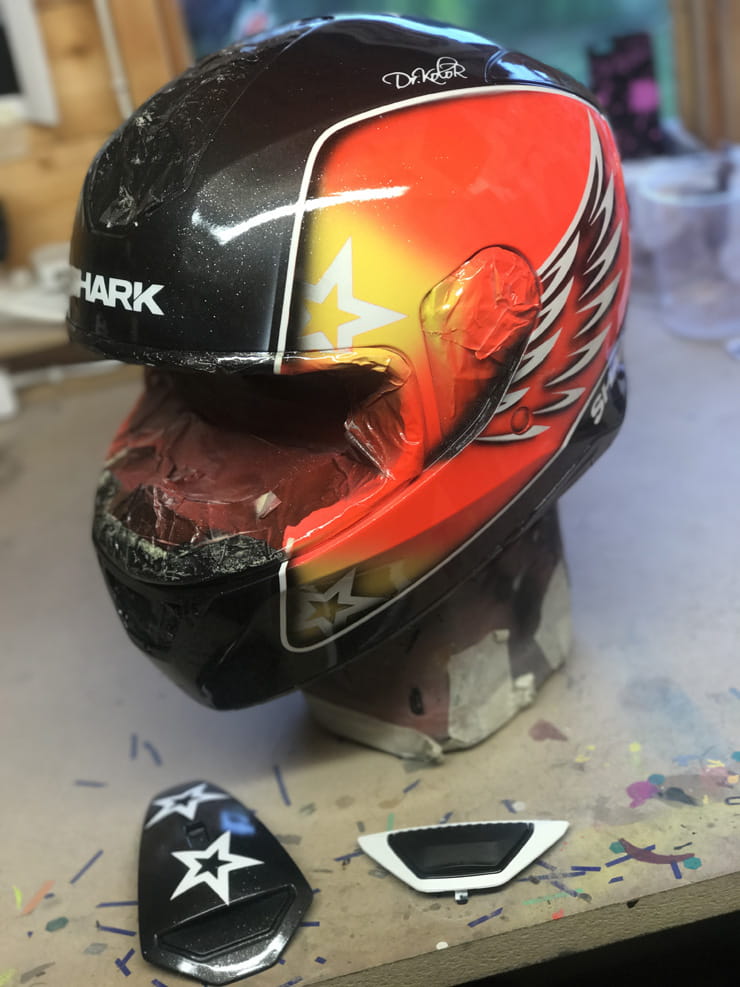 When everything is dry, Dylan carefully removes all of the masking tape. 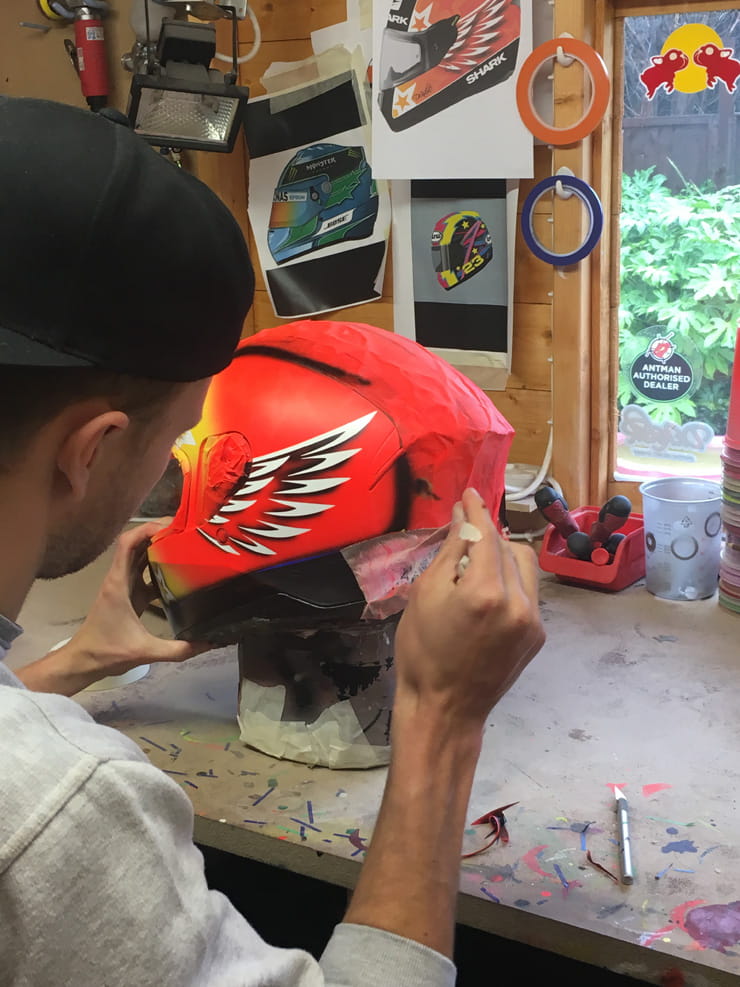 Here you can see Dylan peeling of the thin tape to reveal the narrow white line which separates the black and orange base coats of paint. 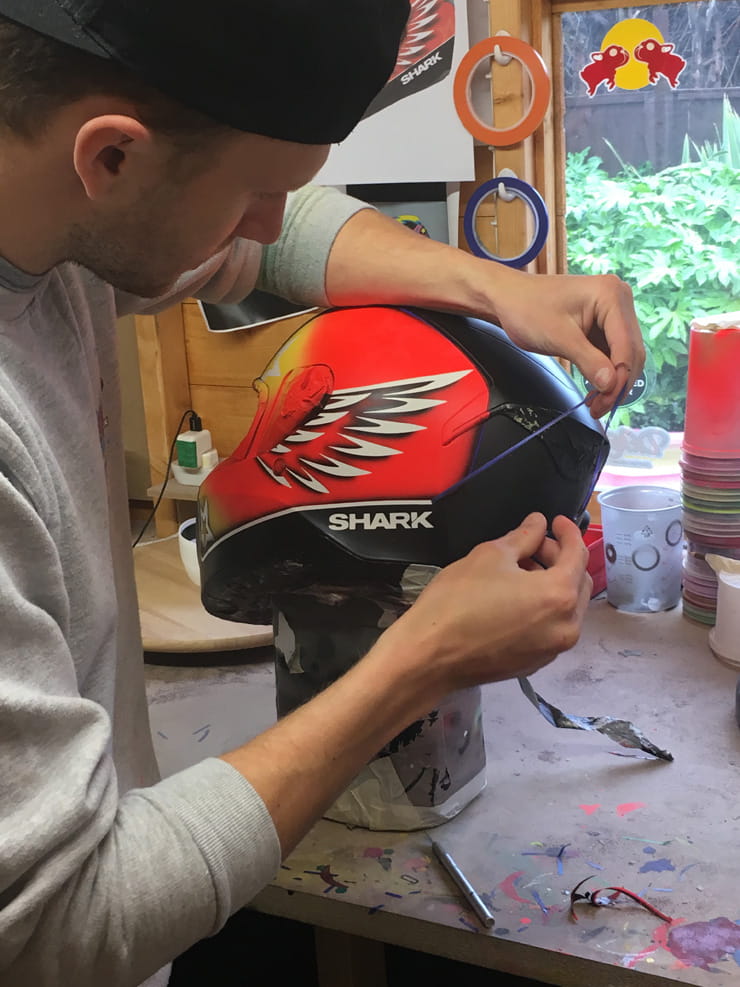 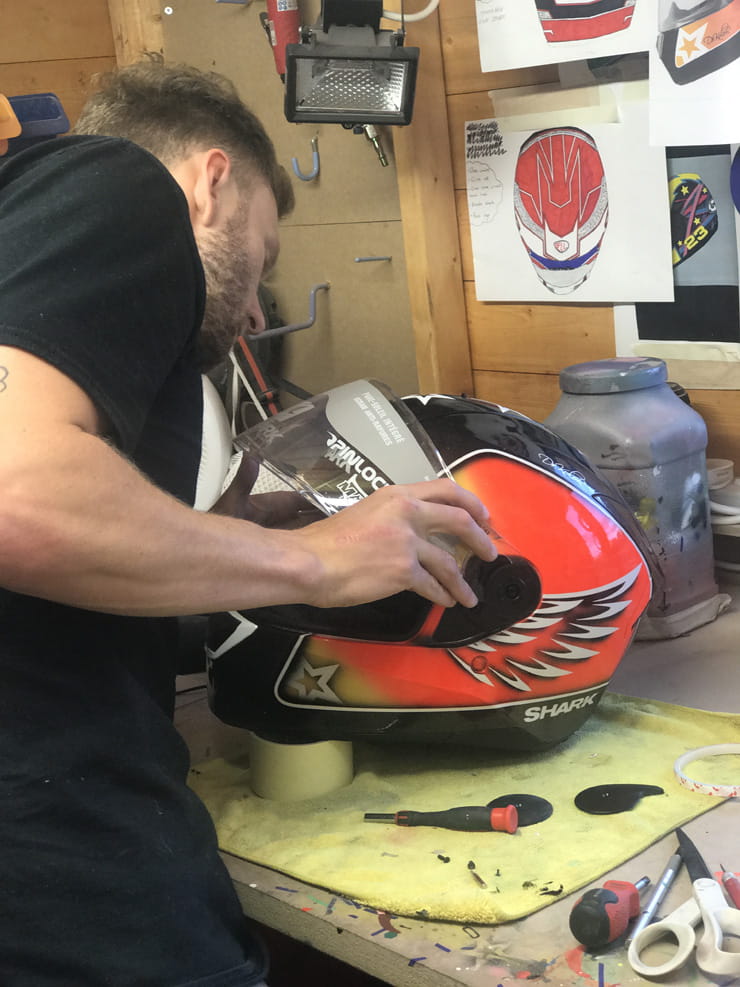 And here's the finished job. 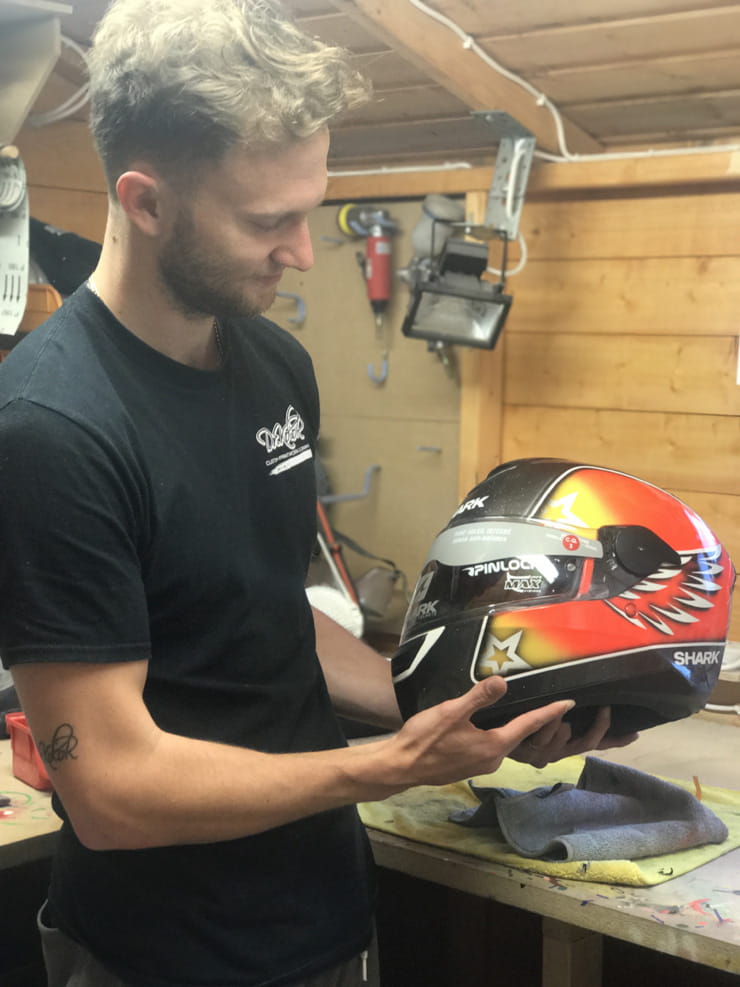