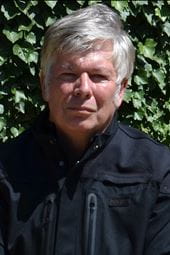 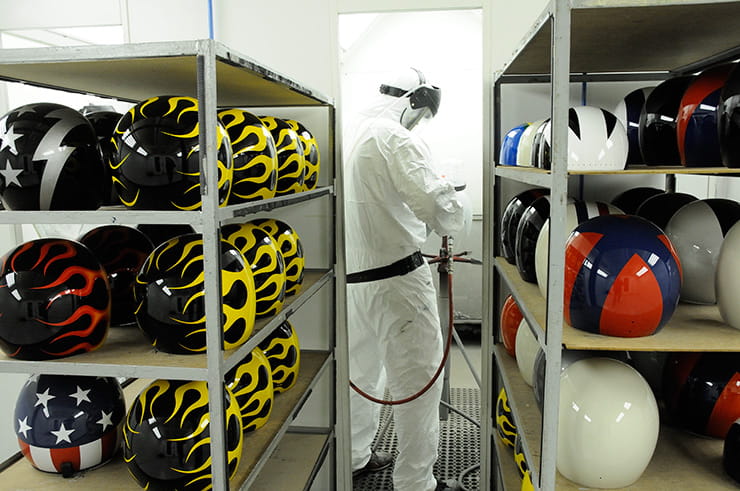 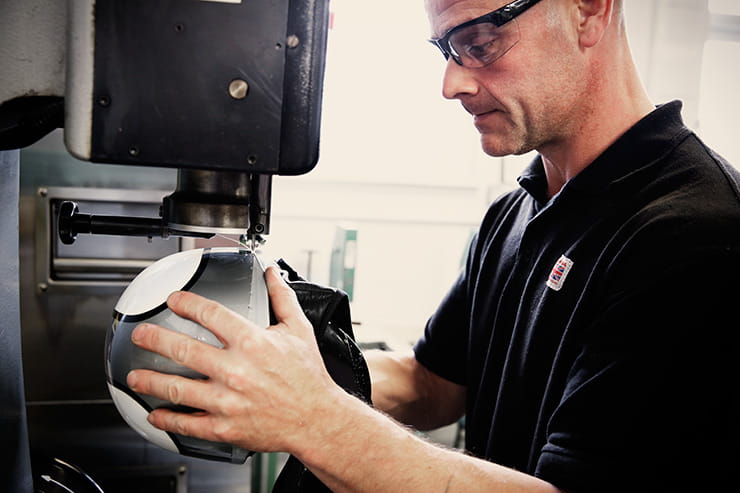 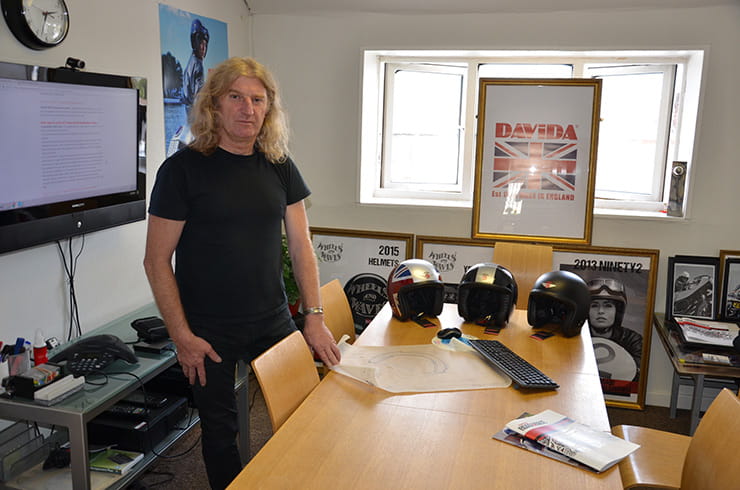 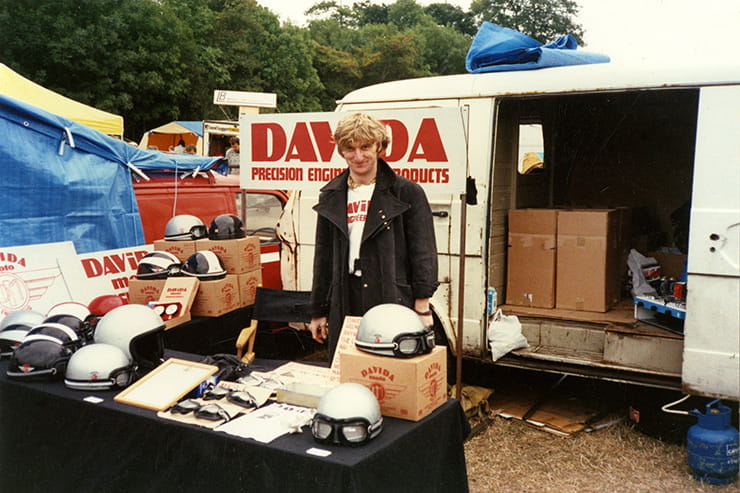 “A crash helmet is a simple machine trying to do a very complex job.” Alan Davenport – Davida Moto, the UK’s only motorcycle helmet manufacturer.

Think about that statement for a moment.

A simple machine? In essence it is. A crash helmet is a pair of springs. The outer shell is the first spring, it distorts, sometimes tears and sometimes cracks to absorb the force of impact. The second spring is the inner shock absorbent lining which compresses and deforms to cushion the impact, sharing the work with the outer shell.

The complex task, of course, it to protect the average 1.3 kilos of brain from life changing and life ending damage.

So yes, a simple machine but the path to simplicity is a thoroughly complex one. To legally offer a helmet for sale, a manufacturer must leap through hoop after hoop of regulation and testing.

Big helmet manufacturers, the Shoeis, the Arais, the AGVs and so on, who sell millions of lids a year have huge budgets for research, development and compliance testing.

Now think about Davida Moto. They work out of a small factory in Birkenhead producing handmade helmets of great quality and they must jump through exactly the same hoops as the multi-million dollar corporations against whom they compete. Quite rightly, there are no concessions made when it comes to safety testing.

“We are the smallest but probably most certified helmet maker in the world” –David Fiddaman (aka Fid the Lid, alias Fiddy), founder and Managing Director of Davida Moto.

To even contemplate starting and running a small manufacturing business in such a market so dense with regulations you need to have engineering skill, determination, patience, the ability to absorb as much mental stress as your products absorb physical stress and particularly, the vision to produce helmets which offer something different from the competition. 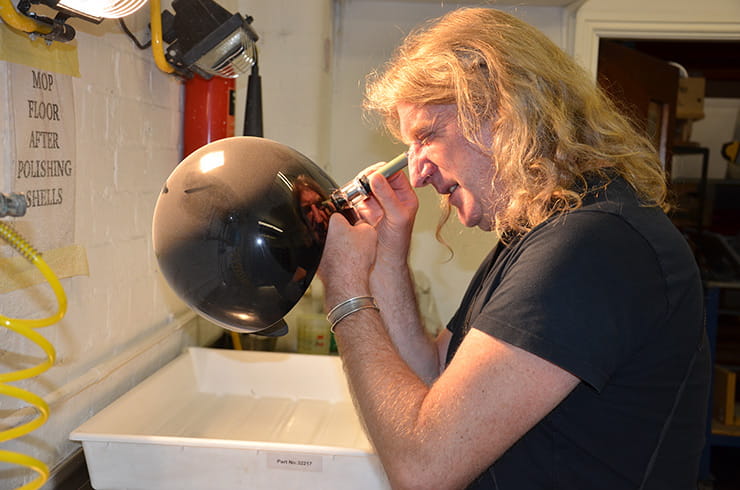 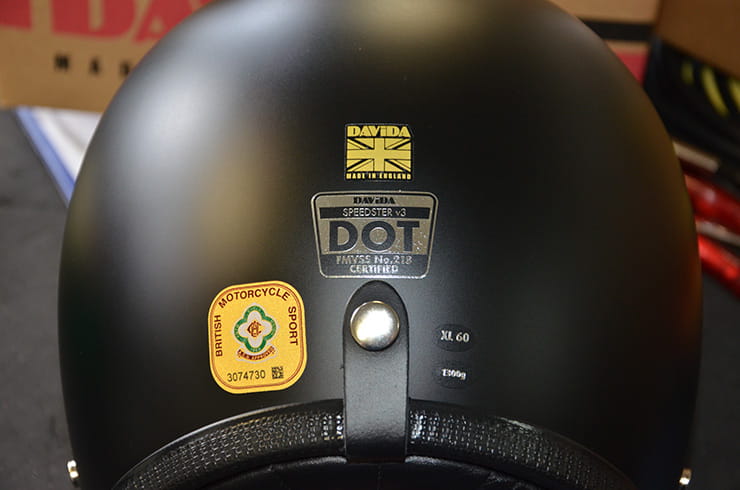 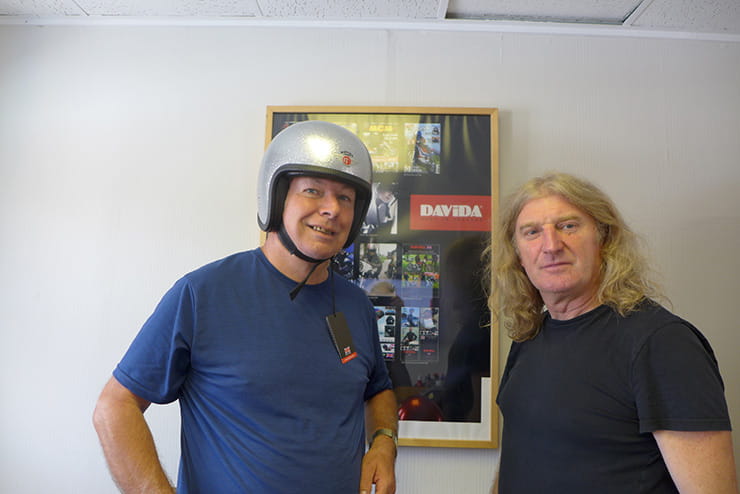 Davida Moto was born out of David Fiddiman’s passion for bikes, which burns as strongly today as it did 41 years ago when he started the business in his mum’s garage. He and a few of his mates couldn’t find decent, properly damped gauges that they needed to balance their carburettors so they made their own. In 1981 Honda were so impressed that they asked Fiddy to make some Honda branded sets so they could sell them on to their dealers. They still make the gauges today in sets of two, four and six.

Following the theme of  making stuff he couldn’t buy, David started making aftermarket swingarms. In the early1980s big bikes, particularly those from Japan, were characterised by engines which were too powerful for their frames. Handling was often marginal. Davida’s box section arms with eccentric adjusters for the rear wheel helped tame some of the waywardness and became a sought after add on at the time. 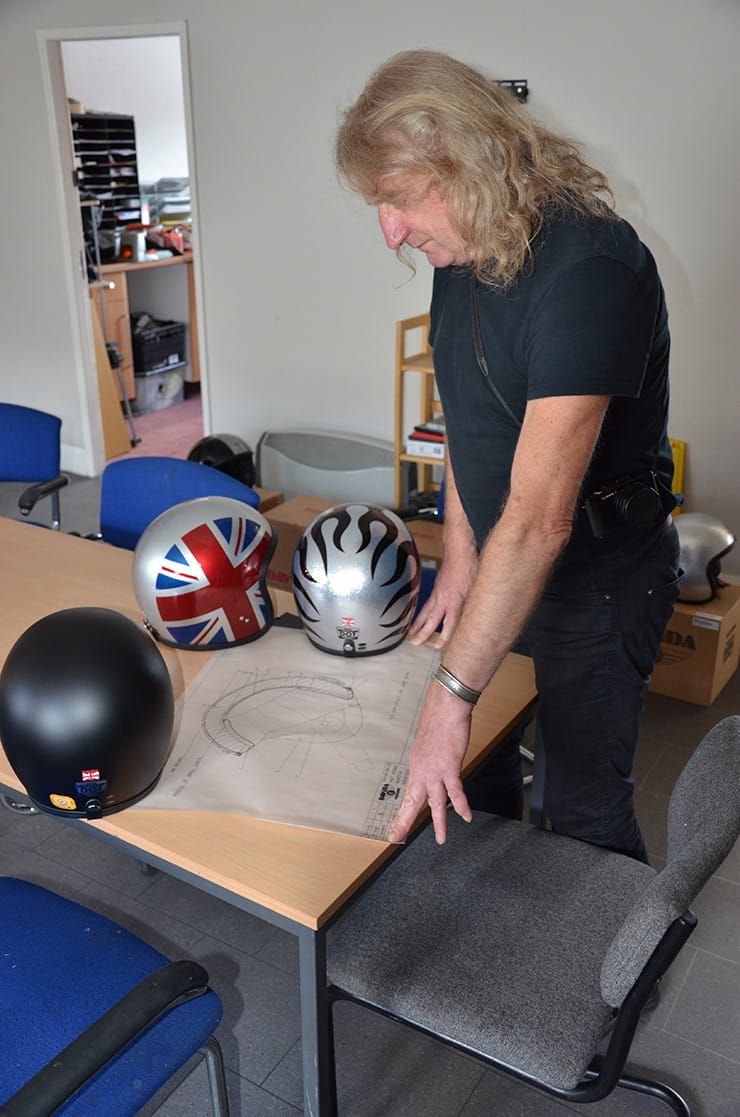 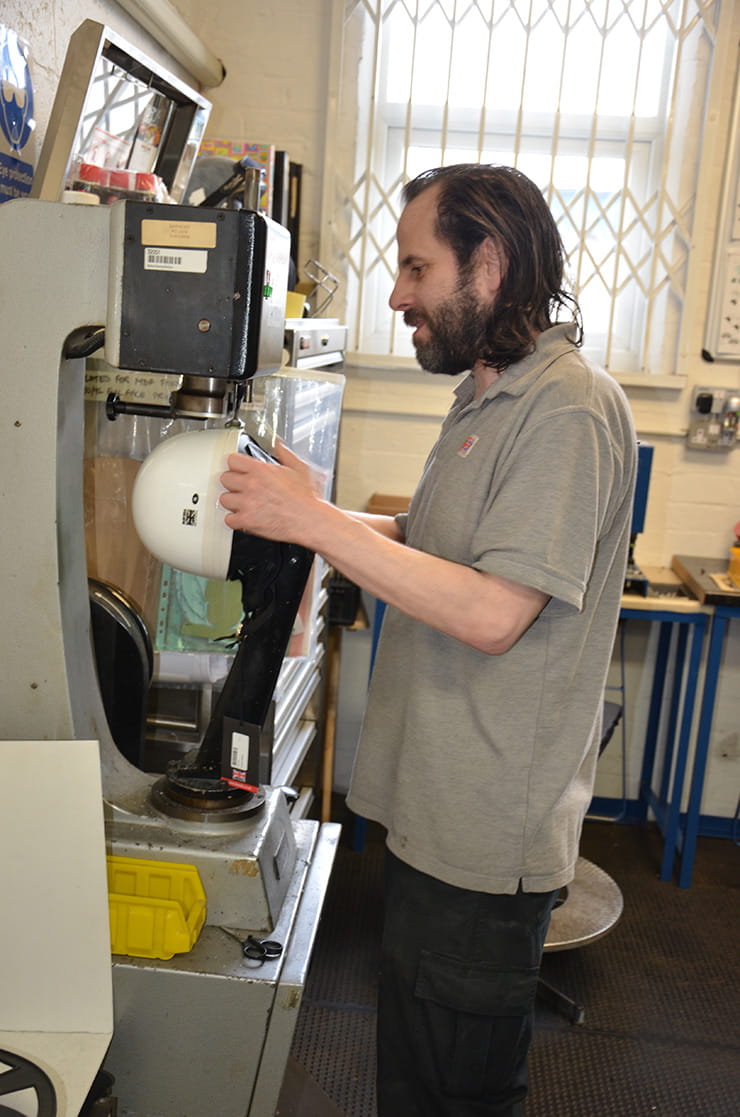 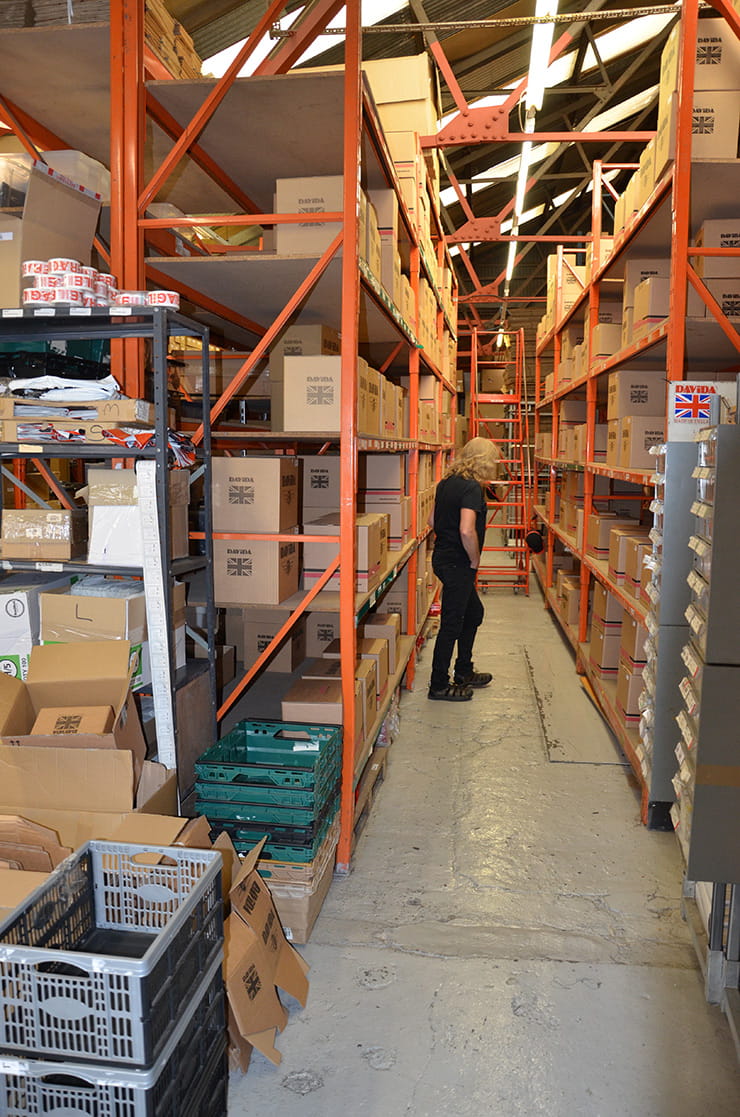 The fist Davida helmet was a replica of the 1950s low dome lids. From the outset, the company did the manufacture in house, learning how to cut patterns and sew leather on the way. They were a big hit in Europe and also in Japan. The Classic is still available today although as Davida are at pains to point out, it does not comply to any current helmet safety standards.

By the early 90s most manufacturers had turned their attentions to full face lids but Davida knew that there were still plenty of riders who didn’t like the claustrophobic aspect of full face hats, and who were willing to pay for top quality open pace helmets.

In 1992, the company launched its first road legal jet helmet. Then as now the assembly was carried out in house. The helmet was leather lined and the emphasis was on high quality not a low price.

The growth of the retro market and the birth of the shed built scene means that today more people than ever want open crash helmets. Davida have profited from that but as Fiddy points out, it also means that some of the bigger manufacturers have either returned to building open hats or have started making them for the first time, so there is more competition than before.

When you compare quality, however, Davida’s helmets take a lot of beating. The helmets are beautifully finished by hand and backed up by a rigorous checking procedure. 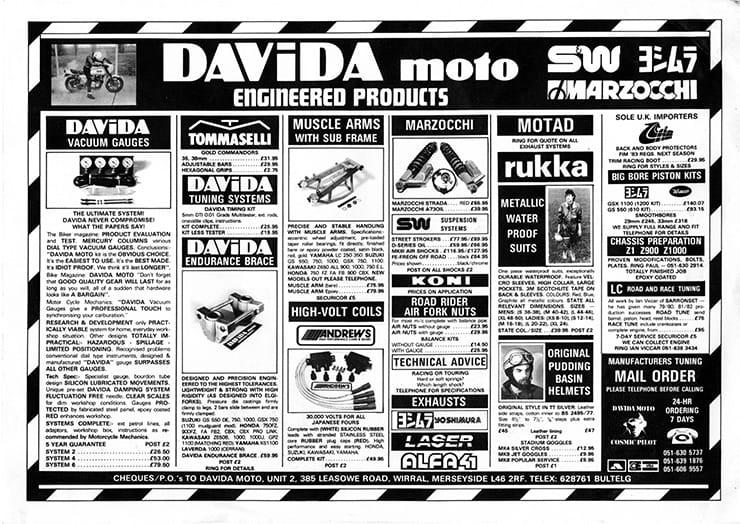 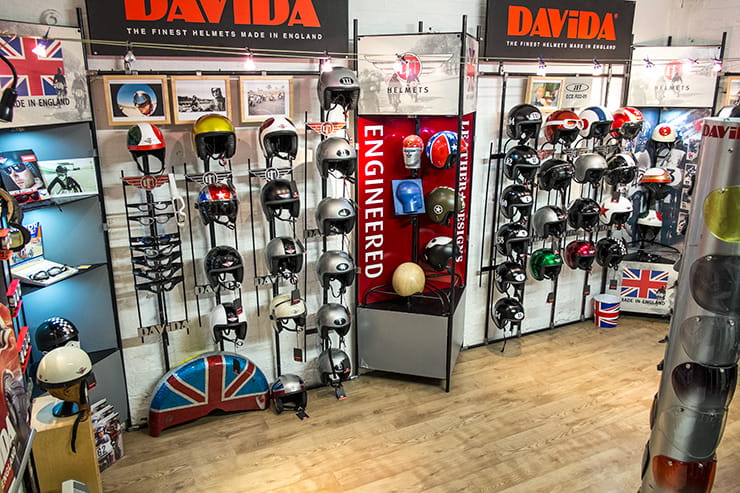 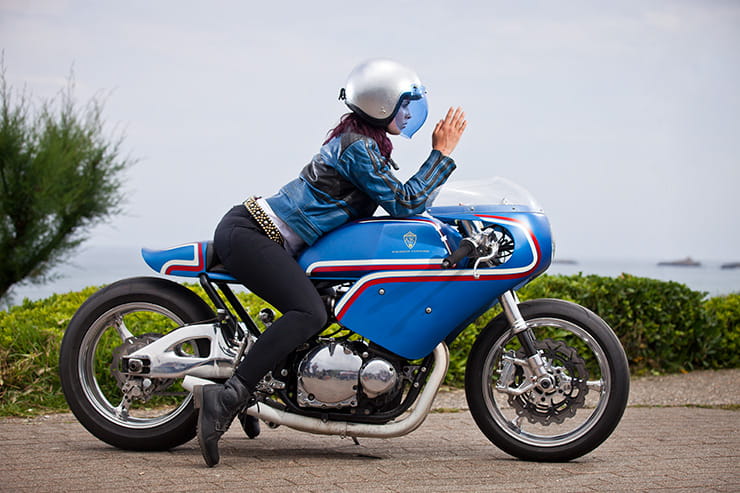 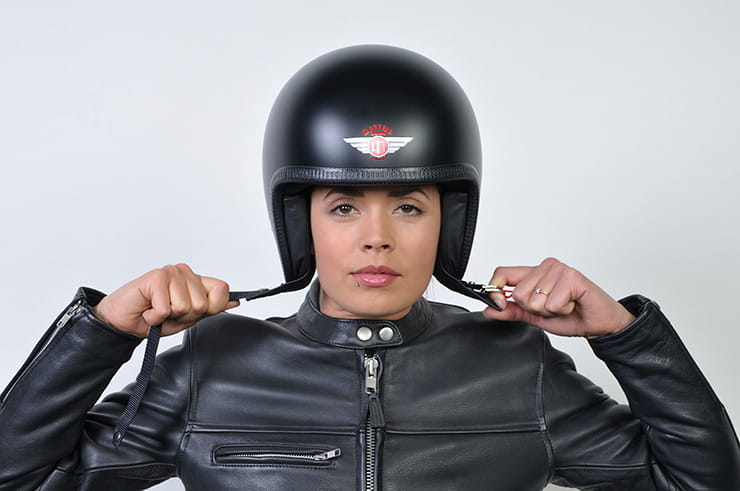 I was lucky to see the process at first hand when I visited the Davida factory in Birkenhead. The helmet shells are all sprayed by hand. Two-pack primer is followed by a single-pack colour coat, with a final layer of two-pack lacquer. A selection of finished helmets from each manufactured batch is checked for both the thickness of the lacquer and the surface hardness of the finish by painting supremo and longest serving employee Martin.

He also uses a device called a crockmeter which tests the material used in the Davida helmet bags for its abrasive qualities. If the material is too abrasive it is rejected as it will mark the finish of the helmets. 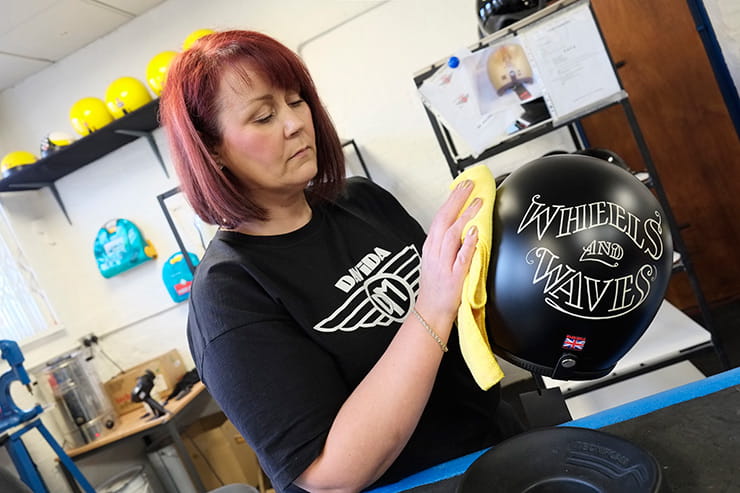 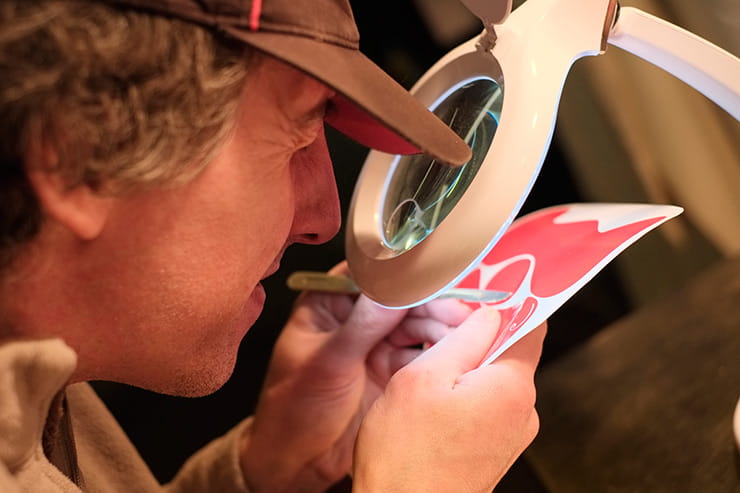 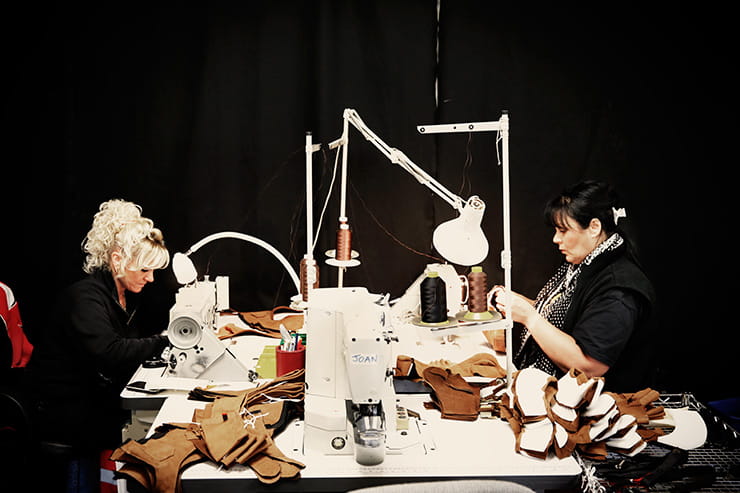 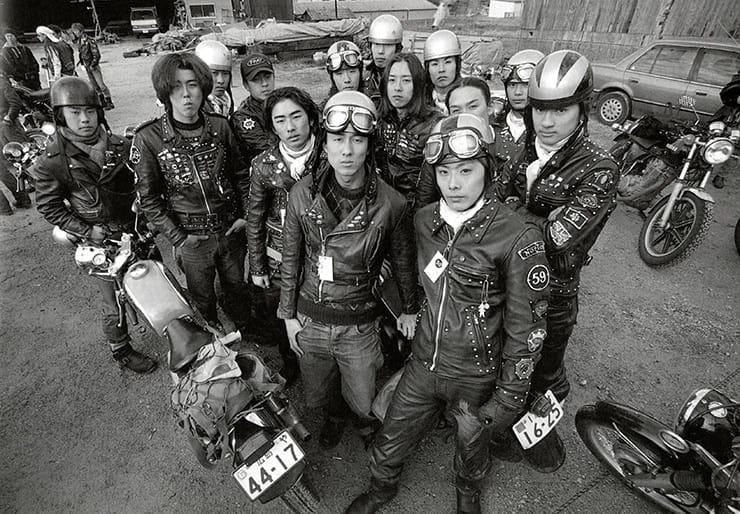 All the leather linings are cut and stitched by hand in the Birkenhead factory. Owners of the Speedster V3 can have a choice of five different colour linings available as aftermarket kits to customise their helmets. Any of nineteen different colour schemes can be specified, and you can also order helmets with studs fitted for peaks and visors.

Three road legal helmets are available, all around the £300 mark which is a good price for a quality hat. I tend to pay around £500 for a full-face lid, Shoei being my preferred make, so the asking price of a Davida seems entirely reasonable. Sure, you can get much cheaper but what value do you put on safety and comfort?

The Jet is probably the best known of the Davida range. Three different shell sizes are used to cover the full range of fittings from Extra Small to XXL. The Speedster V3, new for 2017, is a road legal version of the original Speedster helmet which was first manufactured over 26 years ago. Finally, there is the Ninety2, Davida’s smallest profile road legal hat and probably the closest you can get in appearance to the stuff we used to wear in the sixties and seventies.

I started out using open faced hats because that was all that was available when I first took to the road in 1971. I switched to a full-face helmet in 1978 and have worn one ever since. To round off this story, I tried two Davida helmets for a hundred miles each, the Jet and a Speedster V3. With both I used the Aviator Retro Pilot T2 goggle. Which are designed to be worn with spectacles.

Both helmets are comfortable, with the Jet just having the edge, thanks to the lower (in fact almost non-existent) wind noise. Thrashing on at high speed, the helmets stays firmly planted with no trace of lift. The goggles work perfectly. Without a full enclosure, I found my peripheral vision was improved.

Best of all though was the sense of freedom. It just felt so much better to have the air on my face instead of being cooped up in a goldfish bowl. From now on, when the weather’s good, I’m going to have a Davida waiting on the shelf whether I’m off out on my KTM RC8 R or one of my classic devices.

Davida helmets. Founder Fiddaman is passionate about what the company makes and covers thousands of miles a year wearing Davida kit on his Hayabusa.

British made, high quality, keeping local people in work – there is everything to like about Davida’s range of helmets.