“I tested Pirelli tyres on the runway of a war ship” 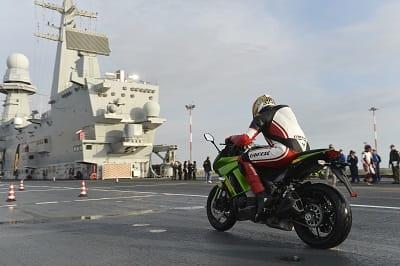 This is no normal Monday. Following a briefing in the control room where pilots get Top Gun style team talks before heading off into battle in Harrier jets, I’m now sat on the aircraft runway of an 80,000 horsepower Italian war ship called Carvour 550. The ship is usually on-hand to assist in natural disasters or send Harrier jump jets off to battle, whereas today it’s docked in Taranto and has been taken over by Pirelli for simulated wet weather brake testing. Imagine how much this is costing the Italian tax payer, if they actually paid tax of course.

The brief is simple – ride as fast as I dare (although ideally no more than 50mph as that’s how the braking test is done officially) towards the take-off ramp on a Kawasaki Z1000SX, brake hard on the wet deck surface and test the braking power of Pirelli’s new Angel GT tyre. It’s a new sports touring tyre which they claim gives 30 per cent more mileage than the previous Pirelli Angel ST, grips better in wet or dry and retains the sporty edge. In independent tests using Bandit 1250 ABS bikes, and their five rival tyres, Pirelli claim the new Angel GT gave the best mileage out of all of them, with an incredible 8699 miles on a rear tyre before it needed replacing. 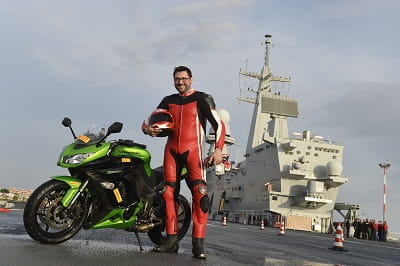 Mileage is the least of my worries today. Sat on the runway, on a Kawasaki, It couldn’t get any more Top Gun if we tried. If Kelly McGillis walked past I’d swear I was actually tripping, when as it is I’m already questioning my sanity after a 3am run to the airport to fly to Italy, and I’m sure that’s six-times world champion Max Biaggi stroking his beard in the corner of the deck. But I’m not tripping, and despite the lack of sleep, this is for real and that is Biaggi who’s here as a Pirelli ambassador. Thankfully he did the first run to check everything was in check.

Pirelli were so keen to show how impressive their new Angel GT sports touring tyres were at stopping in the wet that they used the runway of an aircraft carrier to demonstrate it to a bunch of rag tag bike journalists from around the world. And no, I’m not sure why either, but what an experience.

In truth the surface is used to catching aircraft from around 120mph and is so grippy that you could probably ride round in circles with your knee down and grip levels would be unlikely to make much difference wet or dry. But, to get a load of cool pictures and a PR stunt, I can’t think of much in biking over the last ten years that matches it, except maybe getting Rossi to the TT, something I was lucky enough to be involved in too.

With mist blowing out of water squirters soaking the deck, I line up on the runway on a Pirelli-clad Kawasaki Z1000SX. I’m told by a Pirelli test rider to only brake in the flagged-off braking area as there are glass-covered landing lights on the strip which will cause me to crash, instructed not to go above 80kmh and make sure I don’t go off the end. They never mentioned wheelies, and as my brain thinks about how many more chances am I going to get to wheely on a war ship, the flag drops and I’m off.

The big Kawasaki Z1000SX finds instant traction on the grippy runway surface (rated at 0.9 coeffiency, way more than a normal road or track) and I keep my eye on the speedo for 80kmh. The control tower of the Carvour war ship flicks past and I’m conscious of the ramp at the end of the ship which is more used to launching planes than ham-fisted bike tests. 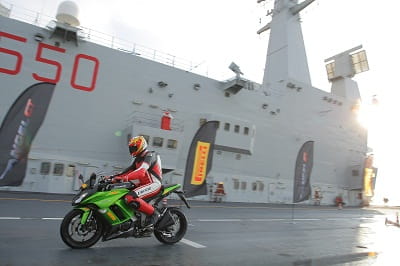 Not fancying a Travis Pastrana style Nitro Circus stunt I hit the brakes as hard as I can and the ABS-equipped bike stops within a few feet, no dramas, no fuss. The spray is evidence enough at how well the tyres clear water, though how well they stop on cold, wet UK roads, we’ll have to wait and see.

The next run I hit it harder, not concentrating on the speedo so hard, the front wheel comes up and I hit the end of the runway hard in second gear, see the end of the ramp rushing up and slam on the anchors (see what I did there…). The tyre bites, the bike dips, there’s a momentary slide while the ABS recovers and it hauls up. To be fair, the tyre would have stopped on this surface if it was worn-out, as the deck is so incredibly grippy, but as a PR stunt, and an experience I will never forget, it’s hard to beat. And if anyone ever dare asks me if I’ve ever wheelied on a War ship, well, funny you should ask, now let me bore you senseless. 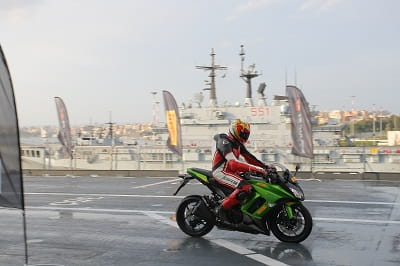