Exclusive: Behind the scenes at the Furygan factory

French manufacturer, Furygan, specialise in protecting motorcyclists with their leather and textile jackets, gloves, trousers, boots and race suits all of which is distributed in 43 counties around the world with the UK being its second biggest market.

So when the family-owned business opened its factory doors exclusively for Bike Social, I grabbed resident video man, Rich Beach, and headed to their South of France HQ to get an idea of how the culture, skills, research, testing and manufacturing processes have developed since the company’s birth back in the summer of ’69. Genuinely the date not just a lame Bryan Adams reference.

127 are employed across two sites; 80 are in the Tunisian assembly factory while the remaining 47 are based here in Nimes, 40 miles east of Montpellier, in a smaller-than-you’d-expect unit that doubles up as the company head office, showroom, test facility, repair centre and manufacturing base.

Walking through the front doors and into a deliberately fashionable warehouse style showroom you immediately sense the homely, family-like culture. Friendly faces in smart/casual attire stride around purposefully, past Furygan press adverts from the 70s and 80s adorning the breeze block walls between glass-fronted offices. One pictures a glove shaped like a rocket ship taking off, another shows a woman riding pillion with her hands inside the riders’ jacket – known as Pillion Pockets or the Duo System. 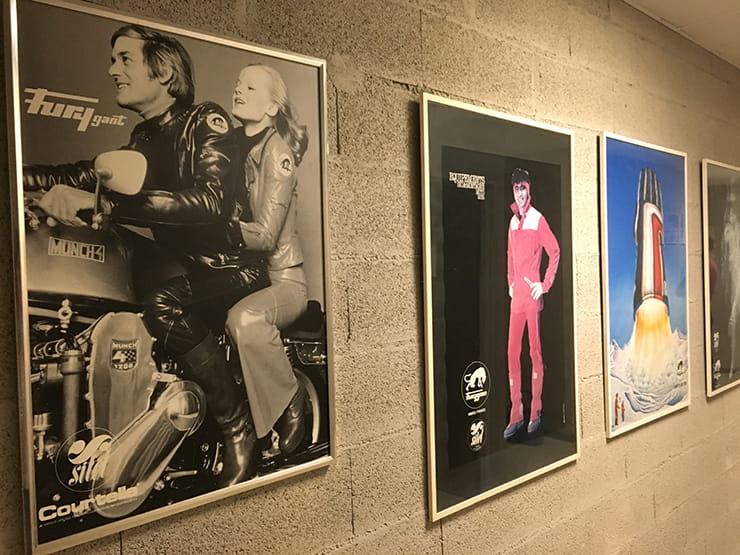 My guide for the day is former motorcycle journalist turned Furygan’s Communications man, David Robert. Only once Monsieur Robert has plied me with stereotypically fresh coffee and croissants, does ‘le tour’ commence, slipping from the relatively public-facing open plan showroom with its full-sized zebra skin rug through a non-descript grey door and into the action zone. The first thing you notice is the familiar leather smell and that's obviously care of the mounds of black, brown, red and blue skins piled high on the shelving units.

One of the first men I meet is Chief Cutter, Eric. The elder statesman of the team retires later this year having been with Furygan for 43 of its 46-year existence. “It is my family”, he tells me before turning back to his the job he's dedicated his life to and continuing to inspect the hide on his workbench for any abnormalities. Eric's place is literally at the head of the table, next to the window, and as we talk his colleagues joke about who will get to replace him. 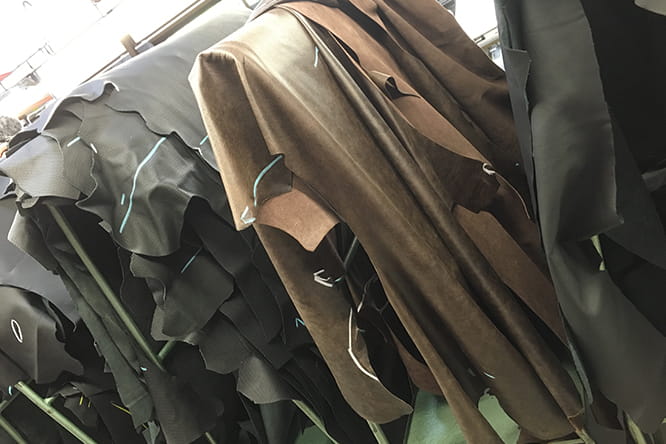 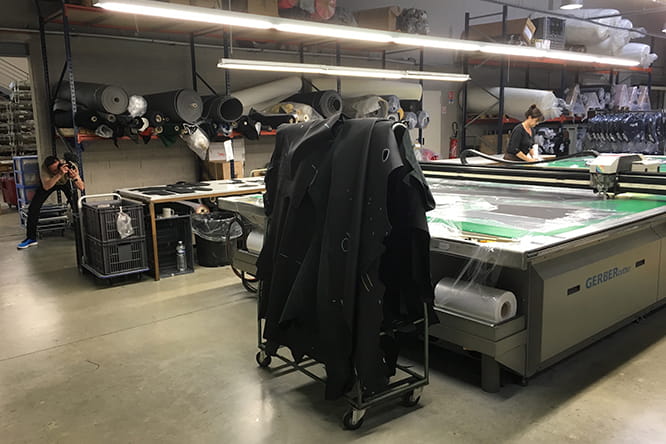 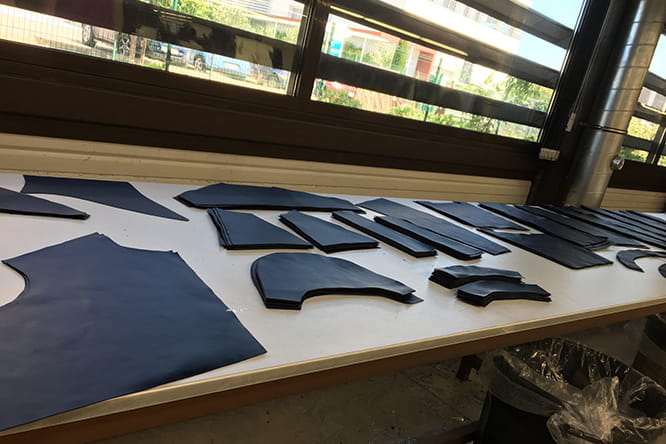 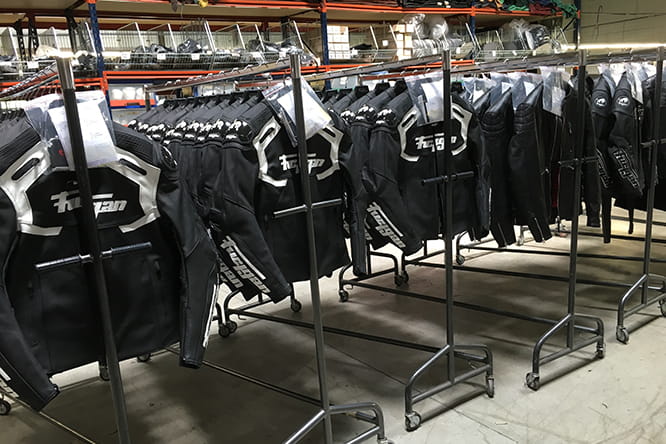 On the next workbench, Elisio of Portuguese descent, is a relative apprentice with just 40 years under his belt. Standing with the one and only piece of equipment he needs, a super-sharp cutting knife, he is surrounded by 100 cardboard templates and what looks like a vast leather jigsaw. The red, white and blue differently sized pieces are spread across his desk. “This is a race suit for Sam Lowes, you know the British rider in Moto2?” he says. Yep, I’m familiar with his work.

Furygan currently support title contender Lowes along with current Moto2 world champion, Johann Zarco and multiple Isle of Man TT winner, Michael Dunlop but the personalised suits are only made for the professional racers, the rest of us mere mortals make do with off-the-shelf. Other famous racing names to have worn Furygan include Agostini, Baker, Pons and even our own Scott Redding. Around 90 used race suits sit on rails in a storage area away from prying eyes having been analysed post-race or crash. Never mind walls speaking, what if these suits could speak?

The custom race suits and prototypes are constructed in the French factory but such is the company’s demand for perfection, only those with several years of experience in the after-sales department get to work on them. The employee must demonstrate a high technical knowledge of how the garments are built by first working on those that have a problem or that have been crashed in and are seeking repair.

The business was founded in 1969 by Jacques Segura who began manufacturing leather motorcycle gloves to add to the range of ski gloves and goalkeeping gloves he was already producing.

Those who speak French will know the French word for glove is ‘gant’ which formed part of the original company name. The ‘t’ was dropped in 1972. Despite being an English word, ‘Fury’ came from the anger ‘Mr Jacques’, as he is still affectionately known, had with his brothers following their fall out over their originally co-owned ‘Segura’ company.

The panther logo was developed from the emblem of a French parachutist army regiment close to Mr Jacques who had been a pilot for a similar regiment in Africa during his military past.

Each Friday afternoon he would sit with the technicians and challenge them to a stitching race to see who could piece together a garment the fastest. The winner would get to go home early but Mr Jacques never lost. And it’s this passion, skill and involvement that formed a culture which remains undiluted. In 2000, Mr Jacques’ son, David, took over at the helm, and even though the Friday challenge no longer takes place, every employee knows the boss’ door is always open. Mr Jacques still pays regular visits and happened to arrive as we made our way around the factory floor. Similar to a royal presence, employees continue to show respect by neatening their shirts, standing taller and smiling.

“There’s a real pride about what they do. It’s not only manufacturing fashion items, it has to be technical, comfortable but protective. That’s something noble for us.” says David Robert. 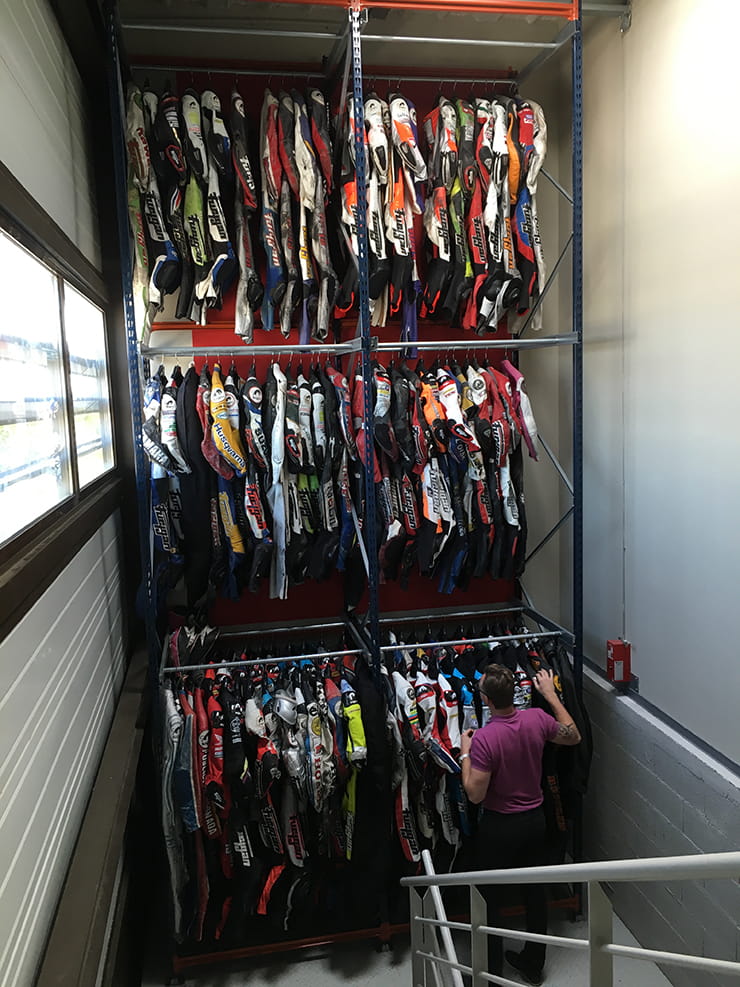 Which is the best leather?

Despite being known as a leather manufacturer, actually 65% of Furygan’s sales is made up of textiles with the popularity of Kevlar-lined Denim jeans now challenging the sales figures of the leather trousers. While the majority of the suits, jackets and trousers use traditional cow hide, the gloves are made from goat leather sourced from Asia.

The more traditional cow hides are sourced in South America from cattle raised in Brazil and Argentina which is then sent to Italian tanneries. When it arrives in the Furygan factory it is marked with chalk to define weaknesses, pattern inconsistencies, scars, branding or marks in the leather some of which can still be used if they are behind the logo, for example. An industrial size scanner is then able to distinguish what can and can’t be used to make the required amount of jackets in a particular size. The magic really happens when the computer linked to both the scanner and a 3cm circular blade begins to automatically cut the exact pieces required making full use of the chalked and scanned hide provided.

The company uses around 100,000m2 of leather per year yet while a cow skin is typically 1cm thick, Furygan will only use the top 1 - 1.4mm, described as ‘pleine fleur’. Thankfully, the remainder is not wasted but instead used by other industries to make shoe soles or furniture.

One jacket will take ½ a cow to make, or in new money that’s 2.5m2, and David tells us that the factory can cut up to an incredible 800 garments per week.

He also attempts to dispel the myth that Kangaroo leather is better than cow skin. “It’s not better,” he says, “just more expensive. It takes 3-4 kangaroos to make what we can with just ½ a cow skin. It’s also thicker but then some racers prefer it. Tito Rabat always looked for kangaroo when we sponsored him while Zarco says no.”

Reassuringly, I’m told that the minimum quality standard is ‘perfect’ and all of a sudden I feel safer knowing the Furygan jacket and jeans I wear were produced in this very factory by the very people I’ve been talking to.

“Our knowledge is the most precious, that is part of our culture because we are not salesmen, we are manufacturers.”

As we work our way around the factory floor, the hum of machinery both computer and manually-operated is loud. Several machinists wear headphones but the atmosphere is still jovial with men and women of all ages seemingly enjoying their line of business. 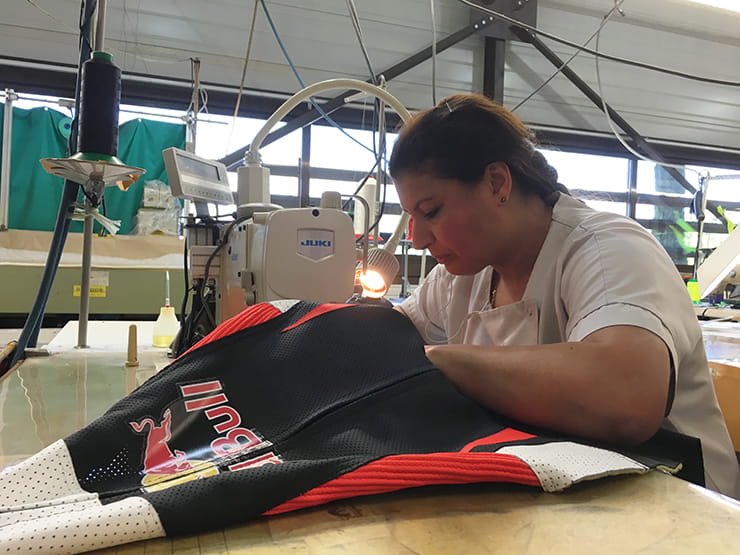 Upstairs is where the secrets are kept. I was ushered away from one open plan room full of the 2017 range and 2018 prototypes as UK distributors, Nevis, were being introduced to it. In an adjoining, far smaller yet brightly lit almost clinical room known as the ‘Motion Lab’ where a lady in her late 30s prepared a testing rig. Tethering a piece of 1.4mm thick leather to a 5kg weight, she tells me, “we test on site for tearing resistance, cutting resistance, stitching and abrasion.”

She hits the rather obvious green button to start an abrasive sanding belt revolving at 40kph. The weight, attached to a metal arm, slams down onto the belt for a few short seconds as I picture a motorcyclist sliding along tarmac. “Each material is tested in three directions,” she says.

David uses the opportunity to tell me, “We are still investing a lot of money in CE standards, from the cheapest garment to the most expensive. That is very important that everybody who wants to ride a motorcycle and have good, performing kit to ride in the safest conditions possible.”

Poignant. We all want to enjoy the freedom of the roads and the individuality that motorcycling brings but there are rules and even though a helmet is all the law asks us to wear in the UK, the majority of riders are still angered when a glove-less fool or an idiot on a sports bike wearing shots rides by. It's not just the cows they should think of, it's the painstaking hours of work the good people of Furygan and all of the safety gear manufacturers put in doing their best to keep skins and bones in their ideal condition. 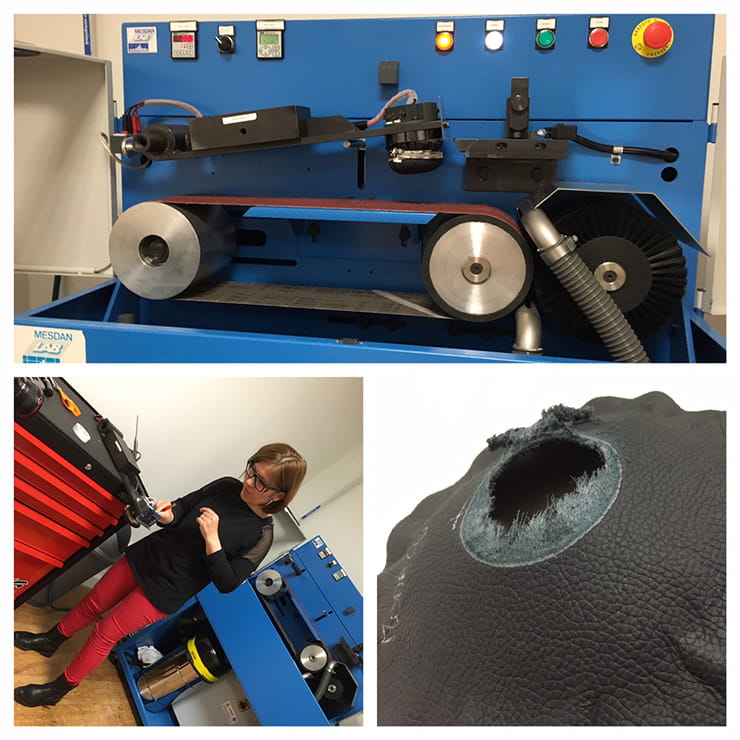 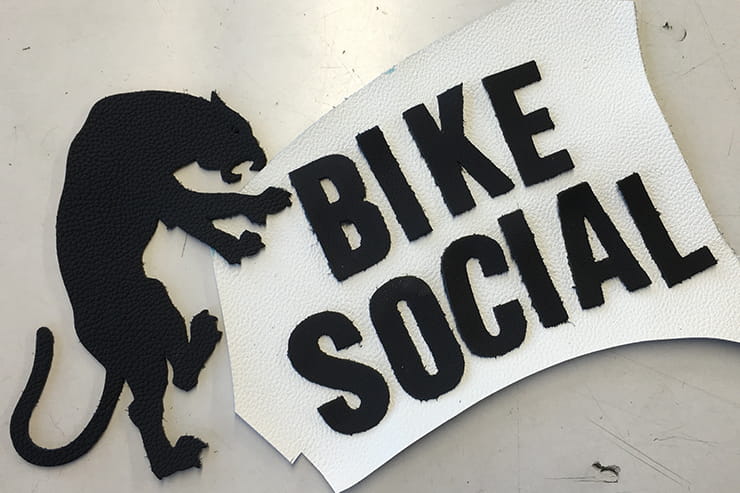