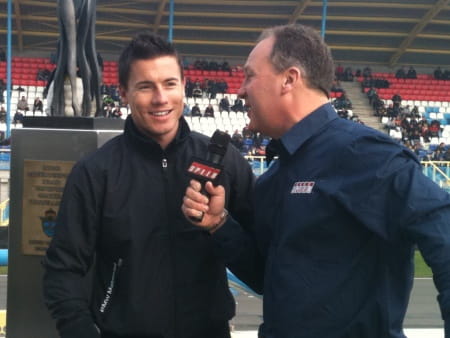 He started his career as a BSB pit lane reporter in the days of Carl Fogarty and then had a “baptism of fire” by going straight up into MotoGP when Rossi “wasn't yet a household name”. But what is he up to now?

Talking about motorcycles for around two days straight must not be the easiest thing in the world and the level of knowledge required about rules and regulations is in-depth to say the least.

“I am a professional broadcaster. I always had the childhood dream of being a racing car driver but unfortunately my parents didn’t have the money that is needed for me to achieve it! I ride a bike on the road and have recently borrowed a brand new Ducati Panigale following the launch but I don't pretend that I am a rider and honestly don't think that us mere mortals have any idea what goes on in the riders minds when they have their helmets on and their out on track.”

That's where co-commentators come in...

“Whenever I can, I always request that I have a co-commentator with me, an expert who knows what's going on in the riders’ heads. It's then my job to get that information out of them for the people listening. To get the opportunity to work with those experts, some of which are World Champions like the amazing Steve Martin. It's great.”

With so many exciting projects and events to commentate at is it possible to have a favourite?

“I'd have to say the F1 at Monaco, as that really is 'The Race'. However I also loved commentating the Macau GP as at that event you really get to see the stars of the future. It's neat because you know them before they become household names. Now when I see the likes of Lewis Hamilton in the paddock, they remember that we knew each other before his career rose to the level it has done.”

Saying hello to Lewis Hamilton and travelling around the world – sounds terrible! However, jobs such as Jonathan's, look glamorous from the outside but often there is a lot of hard work done behind the scenes.

“My job is the best, I can honestly say I have never worked a day in my life, I enjoy it that much! Just the other day, I pinched myself as I was riding round Aragon circuit on a scooter with Steve Martin and the sun was shining and I thought about how lucky I am. I travel around the world talking about things that I love, so it's great! However I will take a typically British negative point of view and admit that yes, the travelling does get hard. There is a lot time away from your own bed, home, family, friends, girlfriend, but hey, I'm not going to complain as it's a great life!”

Meeting stars everyday must just become the norm, but there are certain people who stand out for Jonathan...

“There are two people who really stand out for me. I am lucky enough to get the opportunity to speak with extremely talented and big stars nearly every day. But meeting Michael Schumacher was a highlight for me. Michael was getting a reputation of being a bit snooty when I met him, he was winning all the time and obviously everyone wanted to speak to him. But I booked in a 30-minute interview with him, and as soon as he sat down he was funny, genuine and a great guy. The other person who stands out for me was George Foreman. My dad is a massive boxing fan so when I got the opportunity to meet George it was great. He is and will be a legend of the sport for a very long time.”

A jet setting lifestyle including lots of food on the go and luxurious hotel rooms is enjoyable but fast forward five years, what's the plan?

“In five years I want to be settled in a ranch in Texas. My parents moved out there a few years ago and I relocated there too. But with me travelling so much it would be nice to get some normality in my life and settle down. I don't want to be a Murray Walker, he is a great guy and I have been lucky enough to have the chance to meet him and interview him, but I don't think that's the life for me! It's great fun and I love what I do, so at the moment I am just living the dream!”

With a WSBK race to commentate on, we leave Jonathan to go off and sort out his pile of research papers and look forward to hearing his voice booming from our speakers sometime soon...