Bike Social recently whisked four Track Day Virgins (TDV’s) to a Focused Events day at the Snetterton 300 circuit and despite initial apprehension, their nerves quickly dissipated.  Here’s the tale of their day…

Step forward Sam, Kev, Dan and Chris.  All are between 29 and 34 yet all have less than two years riding experience.  Sam is on his ’04 Daytona, Chris has a slightly newer 675, Kev has already stepped up to a 2010 Speed Triple whilst Dan has an ‘07 GSX-R 750.  All very capable bikes and all good choices for the first time on track. 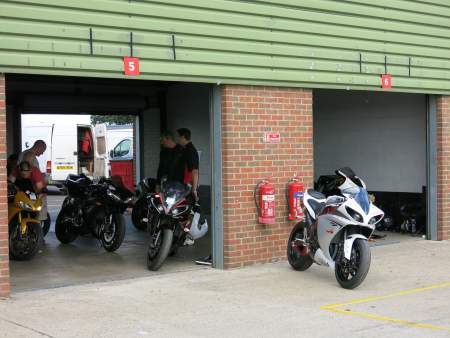 The TDV’s were coerced into riding from Peterborough to deepest, darkest Thetford Forest for an overnight stay the night before where alcohol was deliberately not consumed and replaced instead by a handsome night’s sleep - a priority allowing for a fresh and focused mind!  That said, the evening chat of what was to be achieved the following day began sensibly and even though the natural male ego soon raised the bar with chat of knee slider abuse, the elder and more experienced statesmen of the group quickly reined  the TDV’s back on track.

Daytona Sam said, “My aim for the day is to understand what the bike can do which hopefully will make me a better road rider.  I’d like to enjoy the speed and cornering without worrying about other road users.”

“I’ve had a print-out of the circuit on my desk for the past three weeks trying to learn where it goes, and  I’ve had a look on YouTube too”, he continued.  The circuit map idea was also popular with Triumph Kev who had not considered a track day before because of his relative inexperience on the road and because he didn’t want to risk his bike.

He said, “Stepping into the unknown was never going to stop me from doing it but the apprehension is still there.  I don't want to get dragged into going too quickly and I ask myself ‘do you trust yourself to be sensible’?”

The group arrives at the circuit bright-eyed and bushy-tailed the following morning at 7.30am. The registration process, tyre checks, noise checks and safety briefing quickly pass and before they knew it the first session for the novice group had been called and it was time for gloves on and visors down.  Speedos and mirrors are encouraged to be taped up to avoid temptation to push the mph and to miss a braking point or to look in the mirrors, maximum concentration is required when traveling at speeds that TDV’s aren’t used to.  Focused Events were running the day and very efficient it was too.  The safety briefing had been thorough with the emphasis for a smooth, full and enjoyable day passed firmly to each and every rider - it was their responsibility to look after each other.  The novice, intermediate and experienced groups were not full, the weather was perfect and the track conditions were ideal. 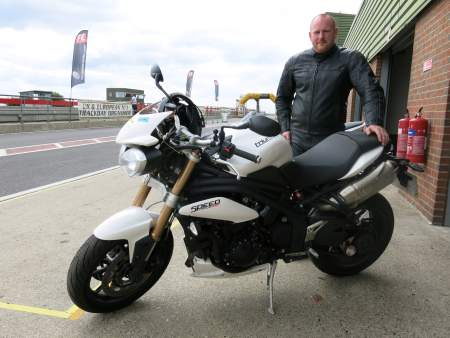 “I thought I’d be more nervous when we got to the circuit but you don’t have time to worry about it.  There’s plenty to do and before you know it, it’s time for the first session”, explained Kev.

Each session lasts 20 minutes although the first three laps of the very first session is the only one that is speed governed and with a no-overtaking rule.   Each group is escorted in full around the circuit with an instructor at the front, one in the middle and one at the back.  You don’t overtake but you do increase the speed on each lap so you become familiar with the circuit layout, grip levels, gear selection and brake points.  Sam was positive about the start to the day, “The sighting laps were really useful, it gave us a chance to familiarise ourselves with the circuit layout and build confidence”. 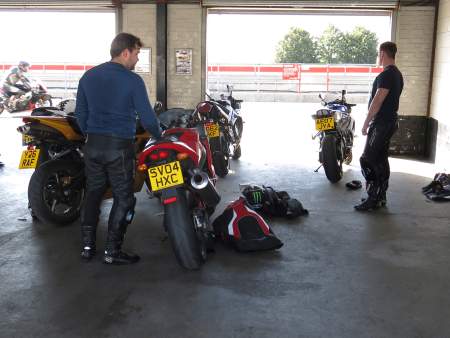 You return to the pit lane to re-assemble before being released back onto the circuit in pairs with a 3-4 second gap.  As each lap passes you build more confidence in the bike, the tyres, the track itself and your ability to brake that little bit later, to lean that little bit further and to accelerate that little bit earlier out of each corner.  20 minutes soon flashes past.

Suzuki Dan said “I was up for it (the track day) from the word go, I signed up straight away and didn’t think any more about it.  I was more excited than nervous but the point where it felt both real and serious was the safety briefing.  We were in at the deep end and for the first few laps I was just concentrating on getting around the track.  As the day progressed I learned to trust the bikes' capability as well as my own.”

After each session the TDV’s returned to their garage to exchange tips on gear selection, favourite corners and how many people they overtook…or not.  The nerves soon disappeared and by the time you’ve debriefed to your mates and taken on some water it’s soon time to get ready for the next session. 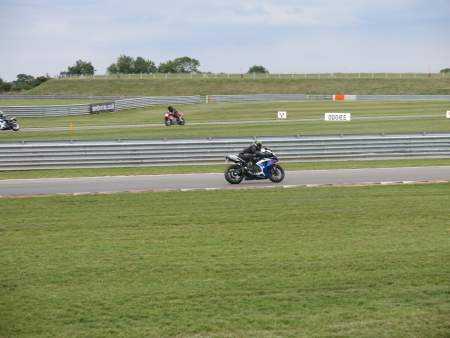 Dan was the only rider who approached an instructor for some additional guidance, “He was massively helpful, fantastic.  He followed me for three laps then I followed him for three and watching his lines was eye-opening, I needed to be a lot smoother, on the brakes especially.  Easy on and easy off.”

“I feel a better rider but seeing all of the other it's out there makes you realise how much more there is to learn.  I'd do another track day without a doubt!” were Sam’s thoughts. 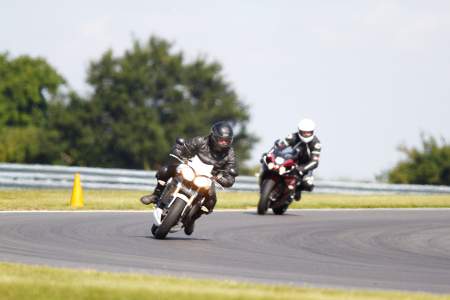 Kev concurred, “I’d definitely do it again. You soon get to learn where your limits are.  Snetterton’s a nice, flat track to learn on.”

Also eager to get on track again is Dan, “My tyres now look like they’ve been used and I got my knee down! I was buzzing on the way home; it gives you a new level of respect for the professional racers because it’s such as physically and mentally exhausting day. From 7am – 7pm I think I went through ever emotion from excitement, fear and nervous.”

Thanks to Focused Events for their hospitality.