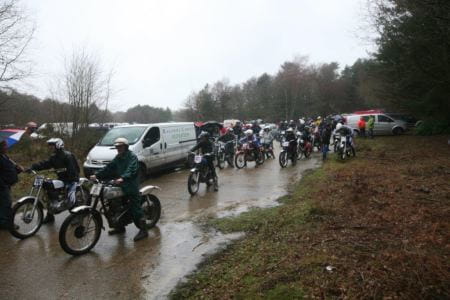 Heavy rain on Sunday dampened the 40th running of the Talmag Trophy Trial which is arguably ‘the’ premier four-stroke trial of the year in the UK. Run as usual on the Ministry of Defence (MOD) land known as Hungry Hill on the outskirts of Aldershot, Hampshire, the normally well drained sections became quite tricky and slippery catching many riders out.

The trial itself takes its name from the organising club, the Territorial Army (London) Motorcycling Club, which was formed after the war. This mouthful of a name soon became abbreviated down to TALMAG and the club continues to this day running the event purely for classic four -strokes.

Once again the trial had an entry of just short of 200 riders across the various classes, including sidecars, attempting one of several routes through the 15 sections spread across the undulating hillsides with a special test included on the first lap of two. While most soldiered on to the bitter end, some riders gave in and headed for an early bath as the rain permeated waterproofs and increased the severity of many of the sections.

As well as those who choose to compete against the terrain, for many it is  very much a social gathering for fans of classic off-road machinery and you can always find a large number of past ‘stars and celebrities’ like Sammy Miller watching and reminiscing amongst the hundreds that gather to watch. You can also always find a bike or two for sale by owners hoping that somebody gets enthused enough to want to compete next year and this year was no exception. 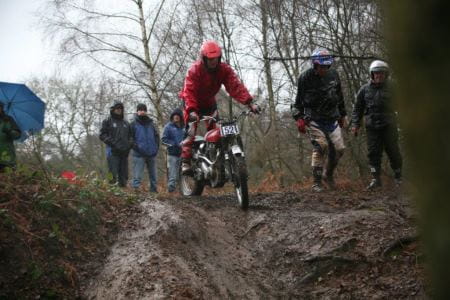 While the spectator numbers were less than usual, there was still a good crowd braving the elements. Brollies were the order of the day for those not equipped with full waterproofs and what shelter there was under the trees was always fully occupied as spectators made their way around the various sections including the flat-out climbs that the event is famous for.

Those who arrived early had a reasonably dry hour looking around the paddock and the bikes being unloaded from vans and trailers. Most listed factory trials bikes from the fifties could be found and it is interesting to note the various obvious modifications, although a few are still just standard bikes riding against some pretty trick machines that have had some serious time and money spent on them.

Trials of course started off as ‘Reliability Trials’ at the turn of the last century, due to the fact that they were designed to test machines durability and to improve the reliability of those early machines. Nowadays with modern electronics hidden away and a lot of development work having taken place, reliability is not in question despite the bikes looking period.

When bikes improved the test became harder and ‘sections’ were created off the public roads and trials as we now know them started to evolve. In some cases the events duration was increased, as with the Scottish Five Days Trial, which of course is now a six day event and still very much part of the UK sporting calendar.

By the twenties most events had moved onto challenging terrain and it was then that the marking system was devised with penalty points being given for ‘footing’ in a section. In the thirties came knobbly tyres to help aid grip and many major manufacturers started to listing ‘trials’ models in their catalogues, although in reality they were nothing more than just stripped down road machines!

After the war trials resumed as though they had never gone away, but by then the days of the big single cylinder 500cc thumpers ruling the roost were coming to an end. Small lightweight two-strokes were starting to be the favoured mounts for those who wanted to win and even the onset of sprung rear ends failed to stop the march of the lightweight ‘rock hoppers’!

Today even those early lightweight machines look heavy compared to the modern day highly specialised bikes that look nothing like any road bike unlike their heavy road based forebears. However, the Talmag has none of these, the entry is packed with four-strokes bikes from the glory days of the British bike industry, bearing names such as AJS, Matchless, Norton, BSA, and Royal Enfield on their tanks, albeit very different machines to the originals.

Despite the modern rider having an ultra-competitive spirit, the Talmag provides a challenge for those who want it and a good ride for those just interested in a good days sport. For many winning is not part of the day, it is just the pleasure of being part of a major very friendly event, no matter what the weather!