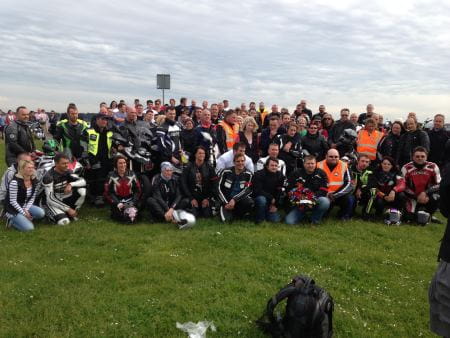 On a Tuesday night between April and September you’ll find almost two-thousand bikers meeting up in Dorset for the Poole Quay Bike Night, which has been running unofficially for around twenty years.

Last year, a group of regular attendees decided to start a Facebook group for the event. This group went from strength to strength, eventually growing to over three thousand members. These like-minded bikers decided they’d start using this following to do something good for the local community and thus the Poole Quay Bikers Trust was formed. The group now raise money for various local charities by organising ride outs and toy runs amongst other events.

We caught up with Chris Seagal, the group’s Founder to find out a little more.

“When we saw the Facebook group go from strength to strength and realised how many people the group had, we thought it’d be a great idea to do something good and put something back into the community.”

Our first event was a ride out in honour of a local twenty-two year old chap called Dan Jones who was killed in a motorcycle accident which was no fault of his own. We raised around £800 money and realised that the group had real potential to reach out to others.”

We organised a ride for a childrens’ hospitals, raising around £800. We used the money to buy toys to replenish older, worn out ones and delivered these.”

Next June, myself and another member of the group are going to ride 4000 miles in nine days across Europe to the most Southern point in Italy in an attempt to raise £5000 for the British Heart Foundation, a charity close to our hearts.”

Nobody gets paid; the whole organisation is entirely voluntary. Last year we raised over £3000 and this year we’re looking to raise between seven and ten thousand pounds.”

You can find out more about Poole Quay Bikers Trust on their website.