Motorcycle Live: your guide to the must see 2017 models at Britain's biggest bike show 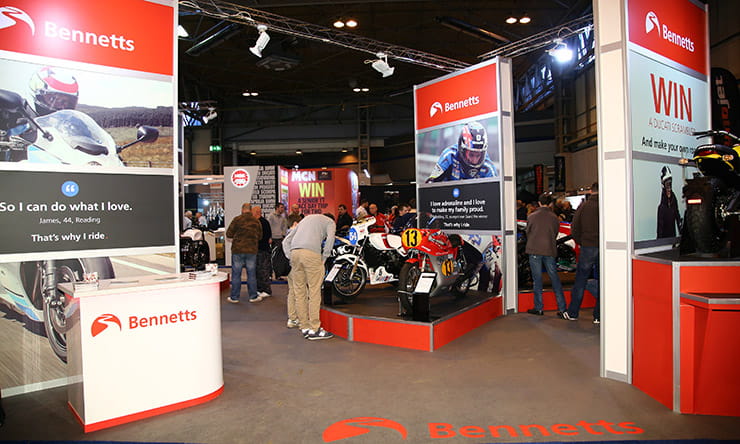 A plethora of 2017 models were unveiled at the recent Cologne and Milan motorcycle shows recently but which can we expect to see at Motorcycle Live at the NEC from 19th-27th November?

Here's our guide to the headline models to ensure you don't miss out at the nine-day British show...

The Italian firm will be giving its UK public debuts to a variety of models at the NEC, namely the new, updated and now 900cc Shiver roadster and Dorsoduro supermoto plus a new Tuono 125 (pictured).

The reborn British marque is due to unveil an extremely limited edition new, sportier ‘R’ version of its delectable Ace roadster. The Ace R is claimed to have a substantial power increase over the standard (but already 173bhp) Ace and bristle with carbon fibre and machined aluminium. Can’t wait!

All of BMW’s 2017 newcomers, including the new Pure and Racer versions of its RNine-T will be present at Motorcycle Live. On top of those, there will also be he new GS version of its entry level G310 (pictured), the updated K1600GTL along with the new ‘bagger’ version, the K1600B, not to mention the updated versions of its R1200GS and the S1000 range, which includes the S1000R, S1000RR and S1000XR. But the biggest draw of all? Surely the new carbon-fibre-framed, concept version of its HP4.

The British off-road specialist is celebrating its 45th anniversary at the NEC where, once again, the latest versions of its radical, super-lightweight adventure bike, the GP450, will be on display. The single-cylinder machine went into production two years ago and the Bolton-based firm have been refining and developing it ever since.

The ever-growing Italian manufacturer brings seven new models to Motorcycle Live along with displaying the expansion of two of its core model ‘families’ – the Monster and the Superbike. Along with two new version of its popular, retro Scrambler, the trail-style ‘Desert Sled’ and the Café Racer, there’s the all-new 937cc SuperSport in both standard and ‘S’ guises; a new Multistrada 950; the brand new Monster 797 along with massively updated 1200 and 1200’S’ versions, plus the exquisite new flagship version of the 1299 Panigale, the 215bhp, carbon framed Superleggera.

Along with 2016’s exciting additions of the CVO Pro Street Breakout (pictured) and the addition of the Roadster to its entry-level Sportster family, the historic American firm is expected to also have its updated for 2017 touring family, complete with the significantly updated and now partially liquid-cooled ‘Milwaukee Eight’ engines on display at the NEC.

Motorcycle Live will see Honda not just celebrating 25 years of its iconic Fireblade superbike, but also the UK debut of the all-new for 2017 CBR1000RR in both stock, SP and SP2 guises.  But although the new ‘Blade is undoubtedly a highlight, Honda newcomers don’t end there. Also at the NEC will be the updated CB500X and CBR500R, similarly updated CBR650F and CB650F plus the new mini-adventure bike, the CRF250 Rally (pictured) AND, arguably the oddest of all, the new ADV-X ‘adventure scooter’!

We expect that Husqvarna’s striking new street single prototypes, the Vitpilen and Svartpilen (pictured) will make it to Birmingham, but we do know for sure that its 2017 line-up of enduro and motocross machines certainly will be.

The reborn US marque returns to the NEC once again with its full 2017 line-up, including the new A2-kitted Scout Sixty along with the Springfield bagger and Chieftain Dark Horse, many of which feature updated entertainment systems, revised colours, new features and more for the new year.

Kawasaki’s significantly updated 2017 line-up will all be on display in the UK for the first time at Motorcycle Live, including the ZX-10RR homologation special, the Ninja 650 (pictured) and the brand new Z900 and Z650, along with a new lightweight, introductory version of its popular Versys, the X-300.

A slightly quieter year for Austrian firm KTM, maybe, but there’s still plenty to see in Birmingham. As well as new versions of the smaller capacity 125, 250 and 390cc Duke roadster singles there’s an even more hardcore 1290 Super Duke R and updated adventure bikes. Hopefully the saucy prototype unveiled in Milan, the 790 Duke (pictured), will also make its way from Austria.

The middleweight retro roadster V7 remains the Italian firm’s best selling model and, to celebrate the 50th anniversary of the original, a new ‘Anniversario’ variant is expected in Birmingham alongside the rest of the new V7 III range and a slightly updated V9.

This looks set to be the biggie. On the first day of the show revived Norton is due to unveil it’s most exciting bike so far, since its revival under Stuart Garner in 2009. The V4 RR is an all-new, 1200cc V4 superbike inspired by its TT racing machine. Expect to be amazed…

Set to be one of the highlights of the show, Britain’s biggest motorcycle manufacturer will be displaying the latest additions to the all-new Bonneville family it first introduced last year. The latest bikes receiving their UK public debut in Birmingham will be the funky new Bonneville Bobber, the 900cc, a more entry-level version of the T120, the T100, plus the similarly-engined Street Scrambler and Street Cup (pictured).

After 2015’s stunning all-new R1, Yamaha has now followed it up for 2017 with a shock, supersport version, the new YZF-R6, which receives its UK public debut at Motorcycle Live. But that’s not the end of Yamaha’s newcomers at the show, there’s three new editions of its TMAX superscoot, the TMAX 500, TMAX SX and TMAX DX, a new XMAX 300 plus a new, limited edition, café racer version of its XSR900, the XSR900 Abarth. Also debuting are three bikes that were first shown in Germany last month: the MT-10SP, SCR950 and an updated MT-09. We'd also like to see the Dakar-style T7 prototype make its way from the Milan show too.

Visit the Bennetts stand in Hall 3, stand 3B10 to see some of the most desirable machines at the show, signings from motorsport’s biggest stars and receive an insurance quote from one of our specialist advisors. What’s more, we will be giving away free coffee to all current Bennetts policyholders throughout the show.

You can also find BikeSocial on the Black Horse stage four times a day (five at weekends), where we'll be bringing you the informative (and most likely pretty hilarious) live talk show 'Whitham Talks' hosted by none other than the brilliant racer-turned-commentator (and all round good bloke) James Whitham. Don't miss it!