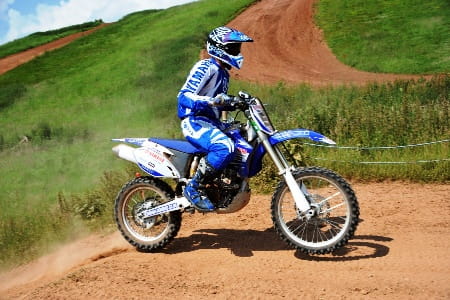 Forgetting about corporate rivalry, the Motorcycle Industry Association (MCIA) bought together powerhouses Honda, Yamaha, Kawasaki, Suzuki and KTM for a long weekend in June to join forces and offer off-road experiences for those who’ve never tried before.

Each manufacturer has a specific interest in the off-road market and while new registrations are up year on year (according to the MCIA stats) with more than 4,500 new trials/enduro bikes sold in 12 months up to the end of May 2014, the market share for this sector has slipped. So, what is the industry doing about it?

Encourage more people to give off-road riding a try, that's what. For a ½ day off-road experience at the AMCA’s (Amateur Motocross Association) purpose-built track in Nottinghamshire at the now annual MCIA MORE (Motorcycle Off Road Experience) you just have to part with £25, we felt suitably encourage so went along to find out a bit more. 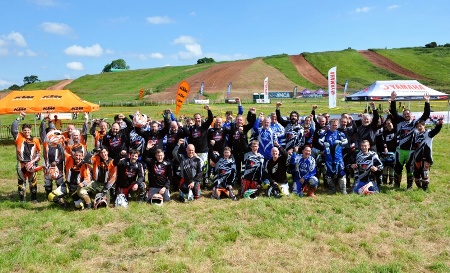 400 places were made available over the four days with each day being split into a morning session and an afternoon session lasting approximately 3 hours each. With five manufacturers on show the maths works out to mean you’ll be one of a group of 10. Five bikes are available so you’ll only ever be on your own section of the grounds with four others from your manufacturer, plus the instructors.

Once signed on you are allocated a manufacturer and each has their expert trainer:

If you’ve never cocked a leg over a motocross bike then the vision that appears before you as you enter through the gate is a hilly off-road course, which on first inspection appears to have an incline only comparable to Mount Everest. For some it may cripple any confidence, for others it will get the heart-rate going. Either way, once you’re on it you’ll not want to come off!

I was placed with Barry Johnson at Yamaha and equipped with a YZ250F while my colleague Paul was given to Ady Smith’s KTM Off Road School set-up and provided with two KTM Freeride’s (250 2-stroke and 350 4-stroke). 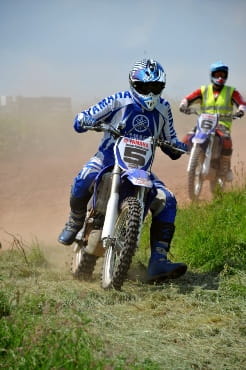 Once you've been dressed head-to-toe in safety gear which matches your bike, Howard Dale, General Manager of Kawasaki and Chair of the MCI's Off-Road Special Member Group, offers an introduction to the day before you climb on these alien machines and adopt an alien riding position.

The clutch is only required for starting and stopping but not for gear changes, you sit as far forward as possible, you stick your leg out in front of you and use it as a ‘corner guide’…it takes a few laps of the flat 200 yard rectangular circuit to get used to it.

If the instructors deem you good enough (i.e. unless you’ve broken their bike!) you can then look forward to laps on the big circuit complete with jumps, ruts, gravel-looking mud, dusty inclines and grassy declines. Nervy stuff on your first wobble around but the more experience you get, the more confident you become.

Following an instructor and feeling like some kind of pro you have four sessions of two laps to develop your techniques, grow your confidence and start getting some air. Some fell, most didn’t, and infectiously high spirits amongst all groups helped each other push their normal safety boundaries. Those that we spoke to enthused about the day, the organisation and their possible off-road futures while comparing notes of which gear they were in when and how they conquered the first ‘table-top’. 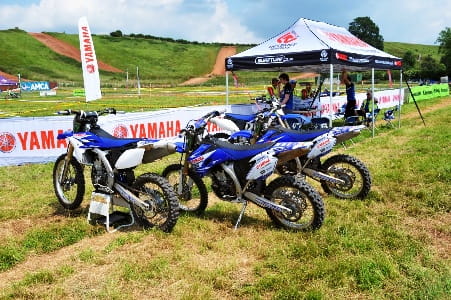 It’s all over too soon but it’s excellent value for money and of course the manufacturers and MCIA want to leave you wanting more. They then ply you with a 10% discount voucher for a full day’s experience at any one of their official off-road schools.

Barry Johnson spoke to us afterwards giving his opinion on the event,

“It gives guys a go on a dirt bike, to enjoy feeling of the bike sliding around in the dirt and on the grass. I became qualified as a motocross instructor as a young lad and then became a professional motocross rider. The two run hand-in-hand, it’s a way of making money and enjoying it but now it’s evolved into giving people the chance to ride the bikes and promote the sport too. It’s quite a niche industry, when people do have a go it’s a great feeling because they realise why we do it. It’s good to work together (with the other manufacturers), getting people on bikes has got to be good for all of us.”

The MCIA must be congratulated for organising such an event and for what is a very reasonable cost. Currently it’s an annual event but given its increasing success year-on-year, we wouldn’t be surprised to see it becoming a more regular event. Places became available back in May and it took just 20 minutes for the weekend slots to reach capacity. 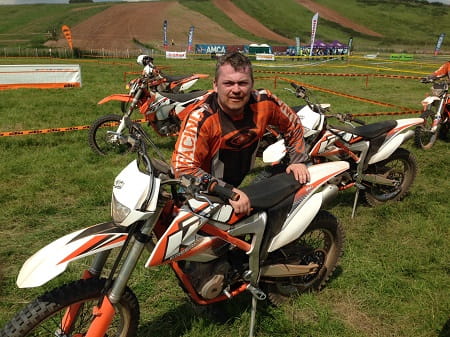 Keep your eye on the Facebook page or here at Bike Social for information about the next event.  In recent years Yamaha have offered an opportunity to test their off-road machinery at the NEC Motorcycle Live Show on a purpose-built indoor track run by Barry Johnson. This has been confirmed for 2014 so take it from us and get signed up.

A video of the day including some on board footage is coming soon...