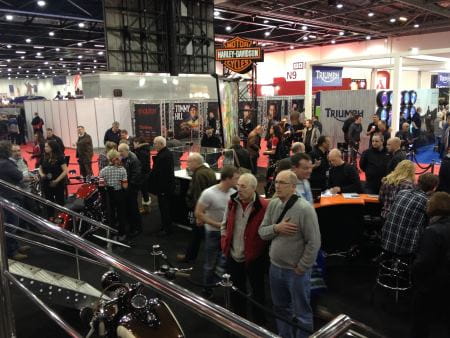 The MCN London Motorcycle Show kicks off tomorrow at the EXCEL and it’s set to be a packed few days with something for everyone. The show boasts a star-studded guest list, including four-time World Superbike Champion Carl Fogarty, TT heroes John McGuinness, Michael Dunlop and Ian Hutchinson and MotoGP stars Cal Crutchlow and Bradley Smith.

Not only will you be able to feast your eyes on the manufacturers’ 2014 offerings, kit and accessories, you’ll also be able to get up close to some of the greatest bikes ever, including all four of Carl Fogarty’s World Championship winning Ducatis.

The show will kick off with a bang, with big news from BT Sport who are expected to reveal their presenting and commentary line-up for the season’s MotoGP coverage. We’ll also be treated to the unveiling of Shane Byrne’s PBM Kawasaki livery, with further BSB news expected throughout the weekend.

If you’re a fan of classic bikes and scraggy hair (or either), James May’s classic Honda collection is set to be displayed in the show’s Classics Zone. The Meccano motorcycle May managed to lap the TT course aboard last year will also be on display.

The Revolution Show will be back (and once again free) for 2014. John McGuinness and Michael Dunlop will go head to head away from the roads as they captain the two teams. Their teams will be made up of Phillip McCallen, Michael Rutter, James Whitham and Ian Hutchinson as they go head to head on pit bikes and trials bikes as they fight for the win.

The show runs from tomorrow until Sunday 16th February and if you haven’t got your tickets yet, you can buy them on the door at £20 for adults and £15 concessions. Children under 15 go free!