Is this the most fun race on the planet? 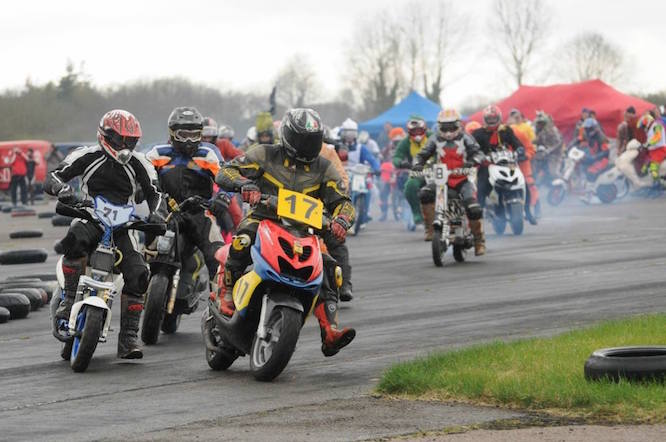 Mopedathon 2015, May Bank Holiday, RAF Wittering Lincolnshire. The rules are simple. Two-stroke twist and goes of 50cc or Honda 90cc semi-automatic four-strokes compete over a short, mixed track of dirt and tarmac. The event runs for six hours. All bikes carry a transponder to record the laps. The team with the most laps wins.

Teams who wear fancy dress throughout the event get a bonus of 15 laps added to their score. The team judged to have come closest to the spirit of the event – fun and camaraderie not out-and-out competition – bag another 5 laps as do the team with the best fancy dress.

46 teams took part, the maximum allowed. Entry fees were £70 with another £25 for transponder hire. All proceeds, including those from the post race bar and barbecue, went to charity. This year it was the East Anglian Air Ambulance who benefitted. www.eaaa.or.uk along with the IMPS Motorcycle Display Team.

Anything goes as far as frames are concerned. The scooter class was mostly standard with perhaps the odd fancy shock. The four-strokes were more heavily modified. Almost every team had replaced the leading link forks with telescopic ones. A couple of teams had squeezed their engines into proper motorbike frames 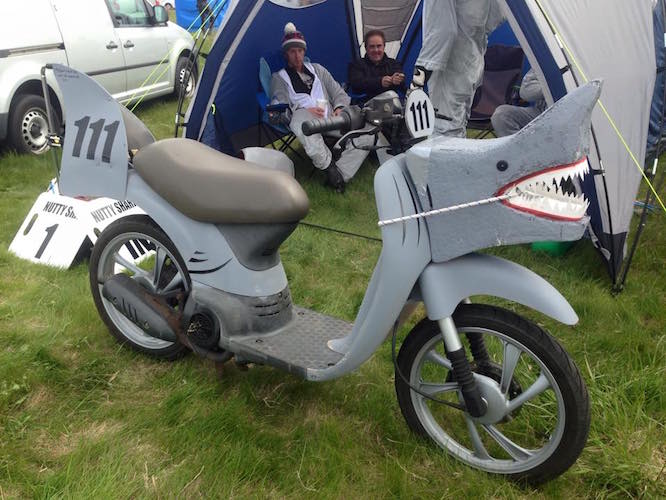 It was hard to tell what was standard in the engine department. Some of the four-strokes sounded suspiciously throaty for 90ccs, while some two strokes were absolutely flying. Mutterings of big bore kits, aviation fuel and engine breaking 18 bhp outputs circulated the paddock, but nobody seemed to mind. Bragging was mostly in reverse, how little you paid for your bike rather than how much.

The fancy dress made the event. Everywhere you looked, there was a reason to laugh; vicars, blokes in ballet skirts, Pink Ladies styled on the girl gang from the movie Grease, complete with blonde wigs gaffered to their helmets. Some of the bikes were heavily sculpted. With a papier mache horse head, fur, a flying tail, and riders dressed as jockeys, Team Pro-Laps took the Best Fancy Dress award. 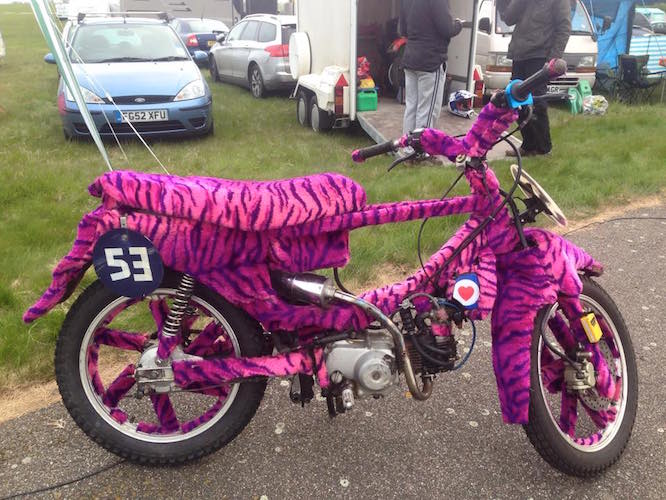 But the team who carried off the prize for entering most into the spirit were the guys dressed as Knights Templar, mounted on the slowest machine in the field – an NVT easy rider. These largely unloved mopeds were vomited out between 1976 and 1986 by Norton Villiers Triumph, product of the death throes of a once great manufacturing concern. The same team also brought along an NVT Easy Rider outfit powered by a pulse jet – think V1 rockets from The Blitz. They fired it up after the event for a few thrilling, ear splitting moments.

However you dress it up though, put a bunch of blokes on a track with stuff powered by engines and they will race.

And race they did, from the Le Mans start, through the bump and barge of the hectic opening laps, all the way to the chequered flag. The competition was fierce, with plenty of harsh overtakes, the occasional shoulder to shoulder contact and trips to the sin bin for the worst offenders. 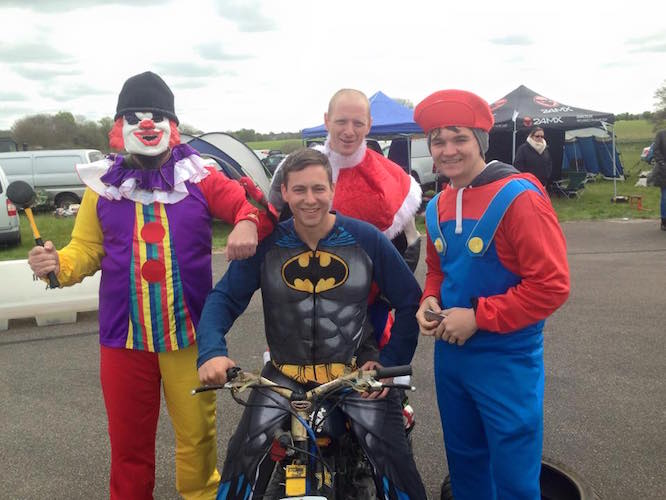 Breakdowns and crash damage were everywhere. Repair methods varied from the use of precision tools to the wielding of big hammers and wrecking bars. The most optimistic repair of the day was Team Green, who used gaffer tape to reattach a snapped inlet manifold. The fix lasted just over one lap.

Mechanical forethought and determined riding won the day. Despite two spells in the sin bin, Garden Gang riding a Honda 90 took victory with 254 laps. It was their fourth attempt. The winning margin was just four laps with Noodle and the Knobheads coming in second, while a further three laps back, was Snail Speed Racing.

The event was run in thoroughly slick style with huge effort from all the volunteers involved. Travelling safety marshals were on constant patrol to keep things moving along with as few incidents as possible. The RAF Motor Sports Association put their weight and effort into helping to organise the event and it was a huge success. £1100 was raised for charity.

The memory that will stick with me most is of everyone, riders, spectators and organisers pitching in to clear the course as soon as the event was over. That sight captured the communal spirit of the whole day. In a world where even the lowliest club racer expects sponsorship, it was a refreshing change.