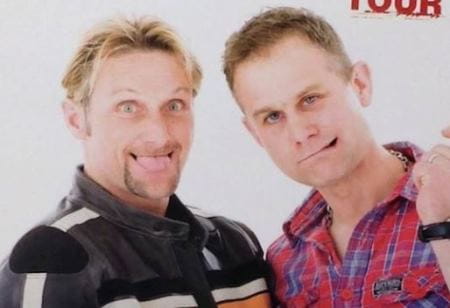 In many ways, ‘Foggy & Whit Givin’ it Gas’ 2014 was exactly what we expected. There was a lot of swearing and a lot of mucking about. What else woudl you expect from Carl Fogarty and James Whitham?

Anybody who’s watched either British or World Superbikes on Eurosport knows that James Whitham is a class entertainer. He’s a joker and always has been and, at least with Whitham, Fogarty’s quite the joker too. Mates since 1984, the rapport between the duo is superb, they bounce off one another tremendously and it is genuinely entertaining.

When you go to watch a comedy act it’s sometimes hard to forget that a lot of the material is made up. As far as we know, there’s nothing fictitious in Foggy & Whit’s show and that’s what makes it all the more hilarious. You know that Carl Fogarty more than likely did get kicked out of an arcade on the Isle of Man for abusing machines when he was a kid and it’s even more likely that James Whitham really did take a dump in an Indonesian golf bunker.

The first half of the show follows a rough structure and in the second the audience are invited to ask questions, meaning that hour or so is unique to the venue and neither Fogarty nor Whitham know what’s coming, if it’s original enough. Usually at a chat show you’re ready to move on to this second part as you’re teetering on boredom after listening to someone talk about themselves for an hour but not with these two... both of them are more bothered about getting in as many funny and embarrassing stories about the other than talking about themselves, this makes it funny, this makes it work.

One criticism that has to be made is that some content is very much unchanged from previous years of the tour but as when you consider that none of the material is made up this is slightly more acceptable; two men can only have a certain number of true, funny anecdotes that are acceptable enough to be recalled on stage.

A punter going to have a laugh would have little to complain about, but a punter going wanting to hear two of their racing heroes talk about racing may be left a little disappointed. Little is mentioned about the pairs’ on-track action with the exceptions of how they met on track at the Manx Grand Prix and a fair number of Whitham’s crashes.

Overall it’s pretty damn hilarious and a decent night out. If one of the remaining tour dates are in a town near you we’d strongly recommend it.