The incredible 4 day event sees a host of cars and bikes from road and track and from yesteryear to modern day often driven and ridden by recognisable faces. There’s a whole host of displays, exhibits and entertainment to keep you occupied.

Bike Social’s very own Marc Potter will be running a very special BSB-spec Honda Fireblade up the hill each day, give him a wave and he’ll give you a burnout!

Tickets are capped at 150,000 over the weekend meaning that at the time of writing, Saturday and Sunday are sold out but there is availability for Thursday and Friday.

Other than Bike Social staff, there are plenty of stars riding up the hill over the weekend, here are our top ten (well, actually 13) in no particular order: 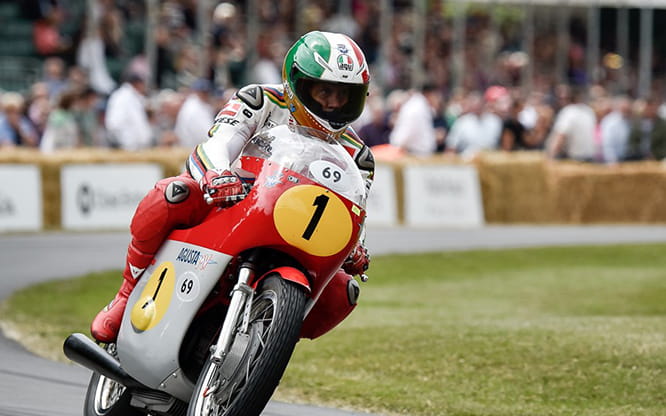 The most successful grand prix motorcycle racer of all time, Giacomo Agostini, is always a crowd favourite at the Goodwood Festival of Speed.

The legendary Italian, 74, has taken a record 15 world titles and 122 race victories from 1964-77, and continued in the sport as a successful Superbike team manager after his retirement from riding. Oh, and he also won 10 Isle of Man TT races. 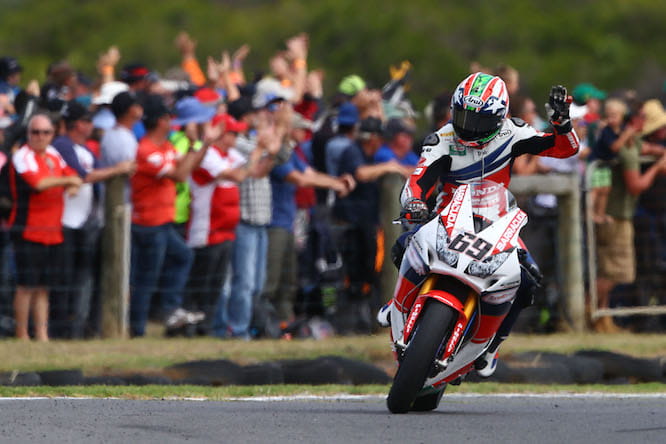 The 34-year old 'Kentucky Kid' makes his first appearance at Goodwood since moving from MotoGP back to World Superbikes. The 2006 World Champion took his and Honda's first win of the season at Sepang at Round 6 of the championship. He currently lies 6th after finishing in the same position at Missano yesterday. 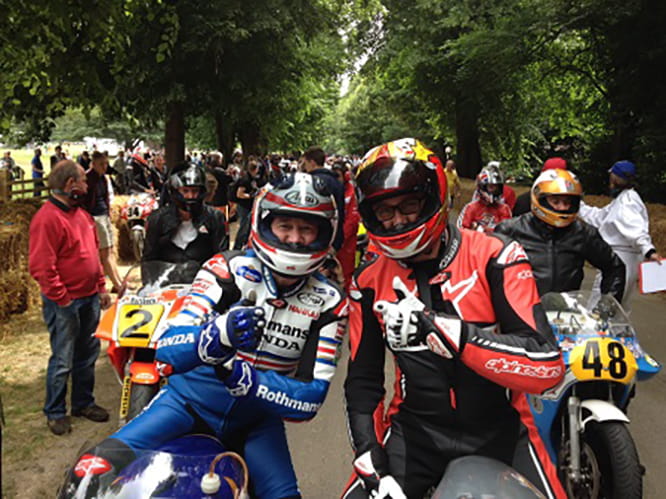 The American three-time World Champion is a famiiar fixture at Goodwood and the 54-year old is the only rider to have ever achieved a 250 and 500cc world title in the same season. 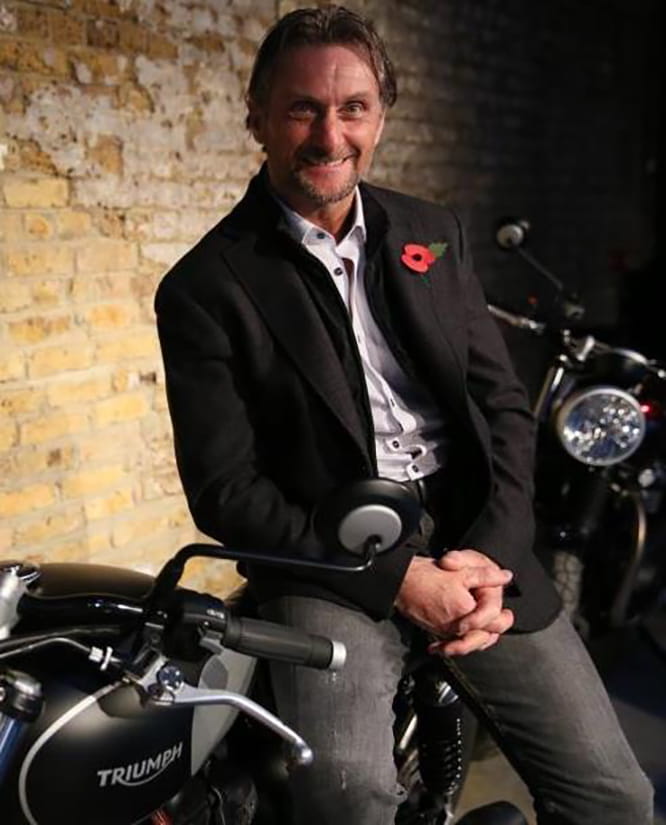 Foggy returns to the Goodwood Festival of Speed this weekend for the first time in eight years in his new role as an ambassador for Triumph motorcycles.

The four-time world superbike champ, historically mo0re associated with Ducati, will ride two of the British marque’s latest bikes, the new Speed Triple and Thruxton R up the famous hill. He will also ride two bikes supplied by the National Motorcycle Museum: the Triumph Bonneville that Malcolm Uphill took to victory in the Production TT and the 750cc Production TT winning Triumph Trident, known as ‘Slippery Sam’. Carl said: “Goodwood is a special event in the motorsport calendar and I’m thrilled to be representing Triumph, especially on such iconic bikes from the past and present. Expect a performance!” 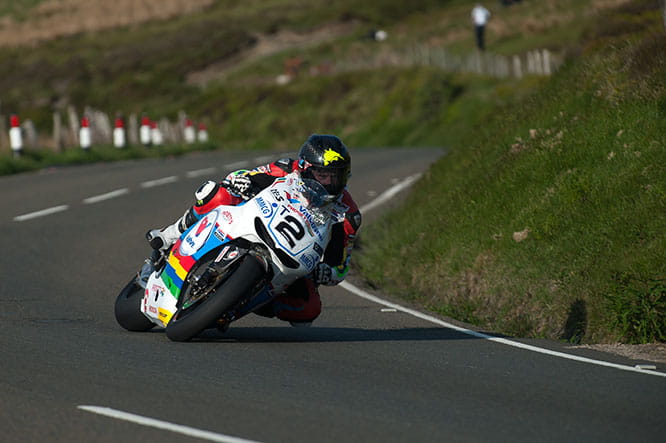 Kiwi Isle of Man TT-winner Bruce Anstey will once again be one of the two-wheel stars at this weekend’s Goodwood Festival of Speed when he takes to the famous hill aboard the fabulous Honda RC213V-S he rode in this year’s Superbike and Senior races. The MotoGP replica was specially-prepared by Padgetts and is so far the only machine of its type to be entered in the event.

Injuries sustained in practice week prevented the popular, 11-time winner adding to his tally in those races (he came 8th and 5th respectively) however he did grab a surprise victory in the TT Zero event on the Wednesday aboard the exquisite Mugen Shinden electric racer. 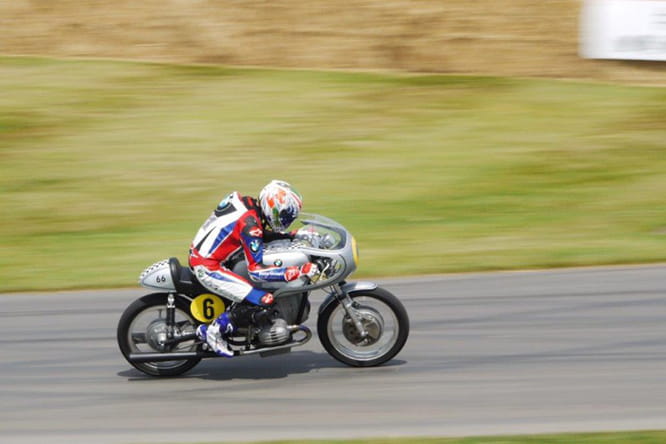 The Australian, two-time world superbike champion is another Festival of Speed regular who will be returning to the Goodwood hill this weekend. Now an ambassador for BMW Motorrad (for whom he last competed in WSB in 2011), the 44-year-old, who won his titles with Ducati in 1996 and Alstare Suzuki in 2005, and in between spent time with Carl Fogarty’s ambitious but flawed Petronas three-cylinder project, will be riding a classic BMW R50S in the event. 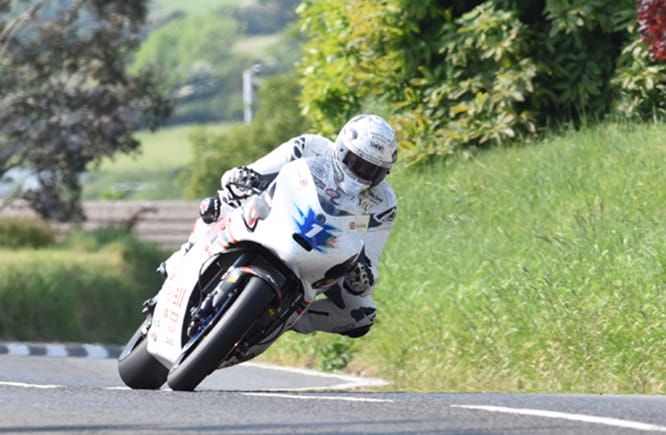 Isle of Man legend McGuinness returns to the Goodwood Festival of Speed this year where he’ll be riding the super-exotic Mugen Shinden TT Zero racer. Although a temporary malfunction on the sophisticated electric machine prevented ‘McPint’ from adding to his tally of TT wins this year and he could ‘only’ post a third in the blue riband Senior event whgich he won so impressively last year, the ‘Morecambe Missile’ is still the current racer with the greatest number of victories – 23. 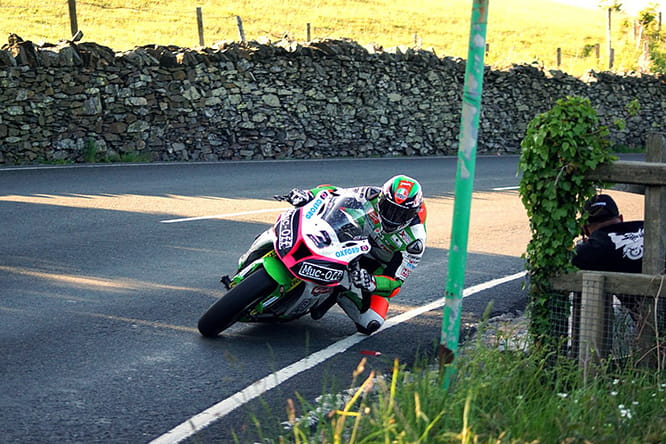 Another current – and rising – TT star who is also becoming something of a regular visitor to Goodwood’s Festival of Speed is the 31-year-old from Ringwood, Hants. Winner of the TT Newcomers Trophy in 2008, the Quattro Plant and Muc-Off-sponsored Kawasaki rider had one of his most successful TTs yet this year with three podiums and a fourth and will be riding his ZX-10R Kawasaki superbike in which he finished 9th in the Senior up the Goodwood hill. 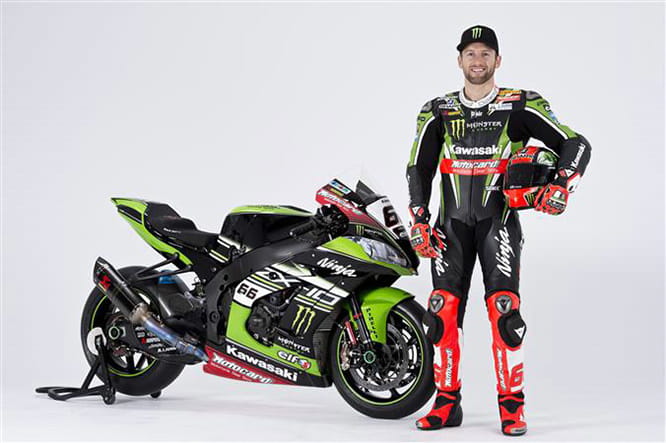 ‘Jimbo’ Hillier isn’t the only rider who’ll be taking a ZX-10R up the Goodwood hill at the Festival of Speed this weekend. As part of a major Kawasaki presence, he’ll be joined by 2013 World Superbike Champion and factory Kawasaki star Tom Sykes. The 30-year-old Yorkshireman from Huddersfield has been racing Kawasakis in WSB since 2010 following rides with Yamaha and with Suzuki and Honda in the British Superbike championship and will be demonstrating his latest, full factory, 2016 machine. 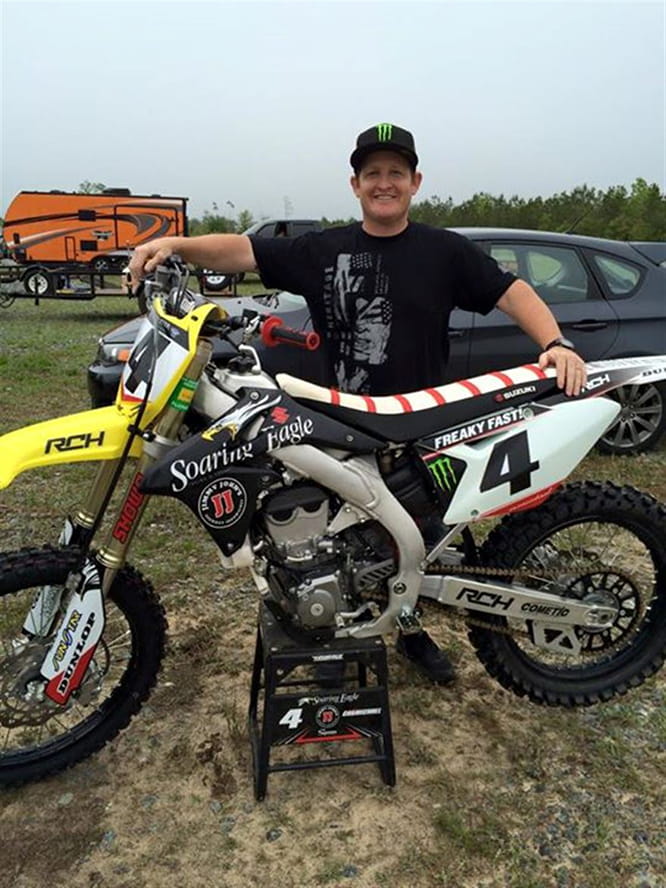 Among the stars from off-road bikesport who are due to appear at this weekend’s Festival of Speed (with three time world MX champ Dave Thorpe among them), the standout is surely Goodwood debutant Ricky Carmichael. The now-retired 36-year-old American from Florida is often referred to as the GOAT (Greatest Of All Time) when it comes to American motocross and supercross winning 16 AMA championships and over 150 race wins between 1997 and 2007. He’ll be demo-ing his Suzuki MX-er up the Goodwood hill. 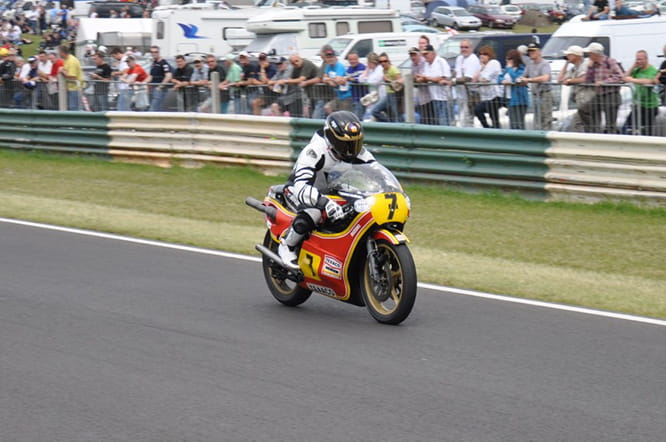 His famous dad, Barry, may have sadly succumbed to cancer in 2003 but the memories, particularly of his two great 500cc world championships with Suzuki in 1976 and 1977 (still the last by a Briton in the premier class) live strongly on, thanks in part to the appearances of his son with his bikes at various motorsport events. Freddie returns to Goodwood again this year and is scheduled to both ride one of his dad’s evocative Suzukis plus also drive the Toyota Supra British Touring Car he raced after retiring from bikes. 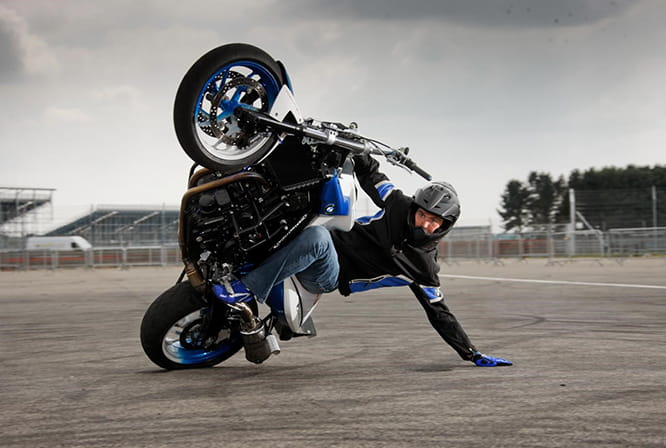 It’s not all racers and competitors demo-ing bikes at the Goodwood Festival of Speed – there’s stunt riders and more. Among these one of the undoubted stars is surely 36-year-old Irishman Mattie Griffin. The BMW-supported rider, who was ranked fifth in the world in both 2008 and 2009, is regularly to be seen performing at events like Motorcycle Live at the NEC and the Festival of Speed is another of his regular events where he’ll be performing on his specially-adapted F800R. 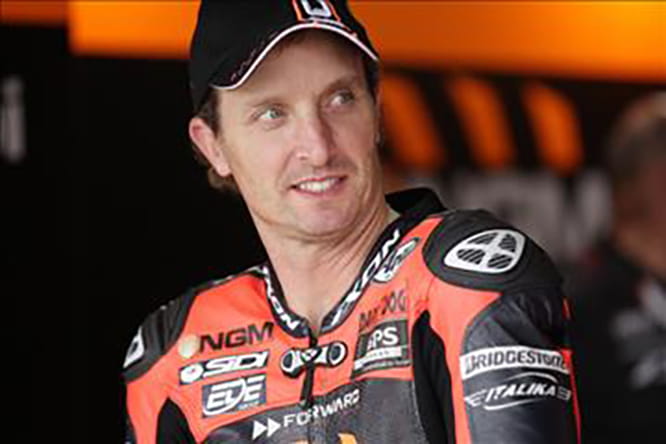 The retired, American, former world champion motorcycle racer is another regular visitor to the UK and regular at the Goodwood Festival of Speed where this year he’ll be riding another of the late, great Barry Sheene’s former GP machines – this time his Yamaha OW48 square four from 1981. Edwards, better known as the ‘Texas Tornado’ is, of course, no stranger to race bikes being a two-time World Superbike champion with Honda before switching to GPs and ultimately riding for Yamaha between 2006 and 2011.