What middleweight naked can I buy for £4000? 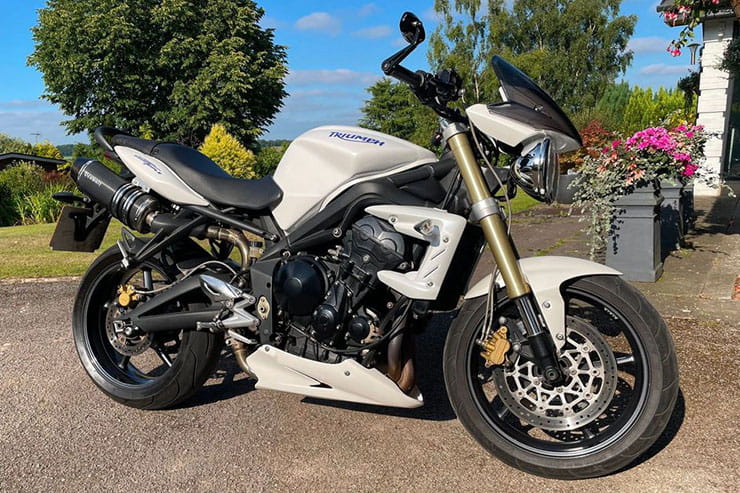 BikeSocial says: When it was launched in 2007, the Street Triple was barking mad then and still is now. Based on the 675 Daytona but with a retuned motor making around 100bhp, the Street Trip echoes the shorty cut-down back and twin underseat cans of the bigger Speed Triple from the same era – but it’s a completely different animal. Where the Speed Trip, until the new version, has always been a really nice, fast, ride-able naked road bike – certainly not what you’d call a hypernaked – the first Street Triple is a bit of a head-banger; a bike with a specific mandate to misbehave, but not in a nasty, spiky way. It’s cheerful, chaotic, rev-happy, incredibly easy to wheelie with a bulging midrange and benign throttle response, aided by a natural balance point thanks to the underseat cans. The chassis is a bit rudimentary – the unadjustable forks and preload and rebound shock were passable-but-basic in 2007 and, unless it’s been fettled, won’t be any better now. But the Street Trip is also very easy to ride normally. It’s a great middleweight all-rounder, and easily one of the most fun bikes you can get for four grand.

A sportier R model, with fully adjustable suspension and radial calipers, was released in 2008 and might be a better bet if you’re planning to upgrade the suspension – but back in the day, it wasn’t regarded as much of an improvement because it made the Street Trip a bit too sporty and harsh, robbing it of some of its easy-going, slightly wonky, character. 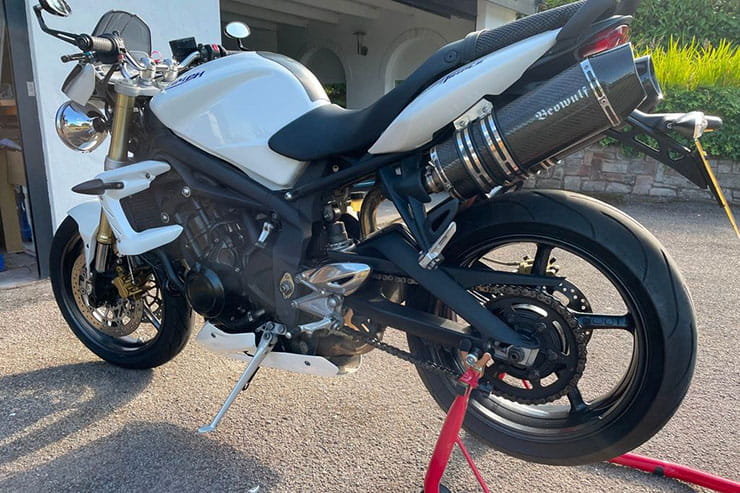 This example, at three and a half grand, is about right for an early standard bike. Clean, looks straight, mileage is good (it’s done 1100 miles a year from new) – at 13,200 miles it’s past the 12,000-mile valve clearance service, so worth checking if it’s been done. Worth asking for the paddock stand too. It’s got a few extras – Beowulf cans, aftermarket brake and clutch levers (which are scuffed so it’s fallen over at some point), Triumph bar end mirrors (get standard ones), a nose cone screen (makes a huge difference to the bike’s usability), and a huge pillion grab rail which looks perfect for learning flamingo wheelies (stand-up wheelies with one foot on the pillion grab rail). But, importantly, there’s nothing too tasteless on the bike – no mini-indicators or tail tidy. There’s a bit of corrosion and general wear in the usual places for a Street Trip – paint always peels on the brake master cylinder, the tope yoke gets grubby and a few bolts and fasteners go grotty. But overall, this bike looks like it has years of wheelies left. 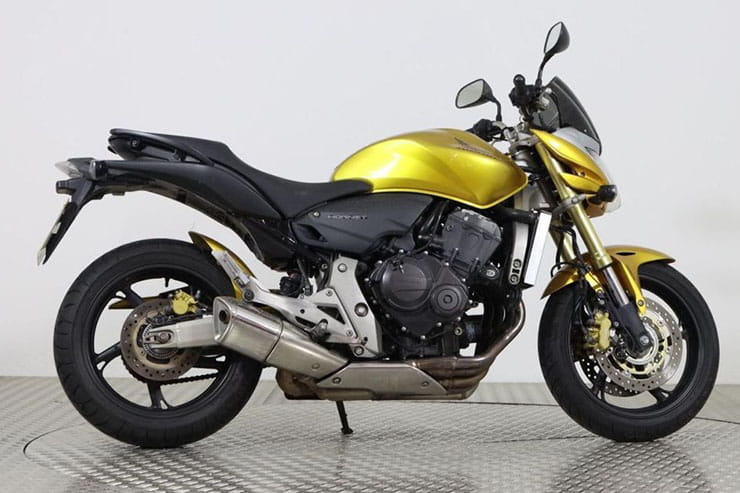 BikeSocial says: Most new middleweight bikes today are parallel twins built to a price in countries with cheaper labour than Japan – Thailand, Indonesia or, in the case of Yamaha, also in France. But the Hornet comes from a time (2008) when Japanese bikes were assembled in Japan with slightly more emphasis on quality materials. Or in other words, more aluminium and less plastic. With the unbreakable motor lifted from the short-stroke sports CBR600RR, and retuned for 100bhp and more midrange (new pistons, cylinder head, cam timing etc), the Hornet engine thrives on revs, and lots of them. Don’t worry, you won’t hurt it. Riders familiar with dainty modern parallel twin middleweights might wonder where the midrange has gone – they might also wonder why the gearbox sounds so clunky. They’re all like that – although Honda gearboxes have been known to shed a tooth or two, so it’s worth running the bike under power in every gear to make sure it doesn’t jump out of gear or skip a tooth.

The Hornet’s chassis is based around an aluminium spine frame, with upside down unadjustable Showa forks and aluminium swingarm, plus on this bike, ABS brakes – and compared to modern middleweights, the Hornet has a more substantial, big-bike feel. It’s a proper, serious motorbike; a world away from the slightly flimsy, Christmas cracker feel of some modern equivalents. It’s not as much innate fun as the Street Triple, but every bit as fast and grown up. Good base for adding touring extras too – you could ride a Hornet with a screen and a top box a very long way. 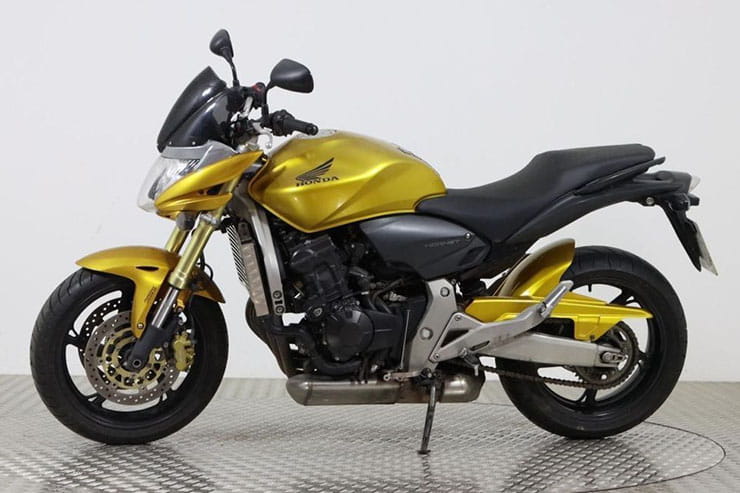 This Hornet, on sale from www.superbikefactory.co.uk, has a crazy low mileage for a 14-year-old bike: 7000 miles is pretty much brand new. However, time hasn’t completely passed the bike by – despite all the waffle about component build quality, the surface finish on the Honda’s cam cover has given up and it’s flaking off big time, and there are a few spots of corrosion on the rear brake lever. The bike comes with a rad guard, R&G crash bungs – seen some toppling-over action – and there’s the much-needed fly-screen. But Hondas have a habit of hanging on to their original new-bike freshness – the switchgear will feel crisp, the throttle, brakes and clutch will feel sharp and the suspension won’t be soggy (although it might want uprating). Might want to check the production date on the tyres too – the BT021 on the back of the bike could be a 2008-vintage tyre. The front is a newer BT023. All in all, a barely used, not-very-well-stored throwback to a time when bikes were bikes. 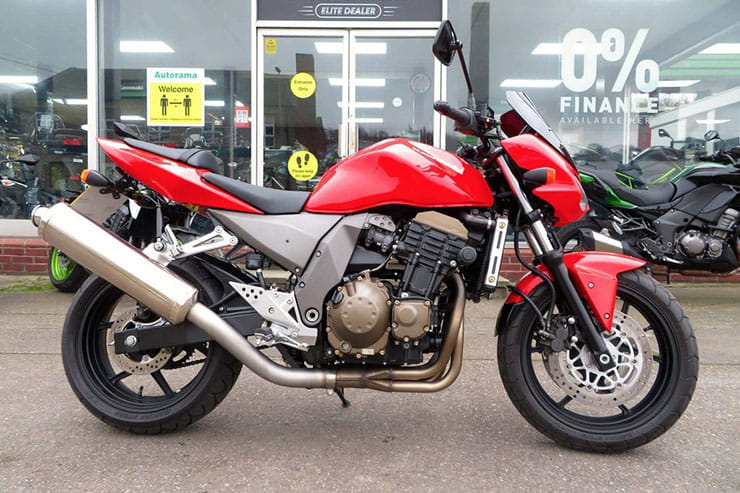 BikeSocial says: Kawasaki’s Z750 range is somewhat forgotten; in the modern age, it started in 2004 with this model, the J1H. It was created at time when Kawasaki had called in a designer called Shunji Tanaka from Mazda to spruce up their range – he was responsible for the MX-5, and at Kawasaki designed the 2001 Z1000 with quad-pipes, the 2004 ZX-10R and 2005 ZX-6R B1, both a sharp and pointy reminder of how gnarly Kawasaki sportsbikes should be. The Z750 is not usually credited to Tanaka-san (he passed away at the end of 2021), but it bears all his hallmarks: sharp, angular lines and a purposeful stance. The engine is a sleeved-down Z1000 motor, making around 100bhp. At the time, most naked middleweights were around 600cc – the Z750 added a bit of beef in the midrange and it’ll still feel like it’s got some heft behind the throttle today. Reliable unit too, but the black engine paint can get a bit flaky. Still, the bronze engine covers (‘Kawasaki magnesium bronze’ is the colour designation) look great. Back in 2004, road tests praised the Z’s extra engine performance against its 600cc rivals, but criticised the basic unadjustable suspension and twin-pot sliding brakes, and suggested the Z750’s riding position, ‘on top’ rather than ‘in’ the bike, plus its slightly vibey engine and lack of screen made it the hardest to ride any distance. The softies. 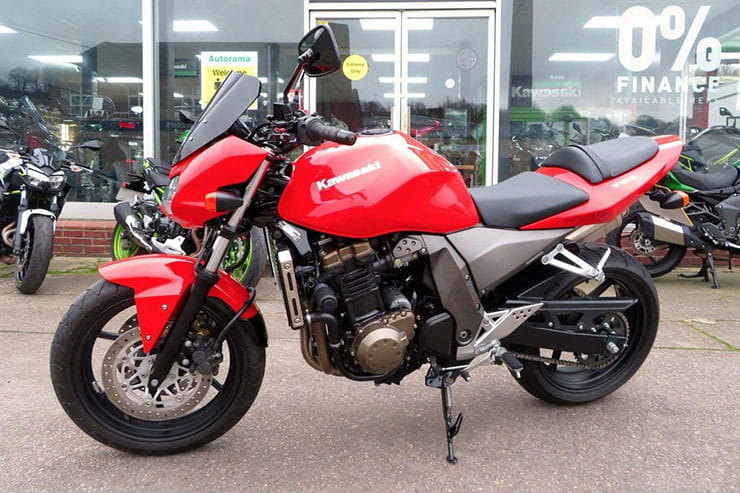 They ain’t kidding – this is stunning. This Z750 is very exciting because it’s so, so immaculate. Always had a soft spot for the first Z750s – they really do look awesome – and this one is the right colour (the best road Kawasakis are GPZ-red). It’s also pretty much brand new, with only 2500 miles on it, and the condition is spotless – look at those headers, that end can. Mwah. Showroom. A few bolt-ons – adjustable levers, tail tidy, crash bungs, a rad cover, and a very useful flyscreen – don’t spoil the view. But it’s rare to find a 14-year-old bike in showroom condition for this kind of money – even if the thing is a pig to ride, which it isn’t – it’s worth buying because it’s so pretty. 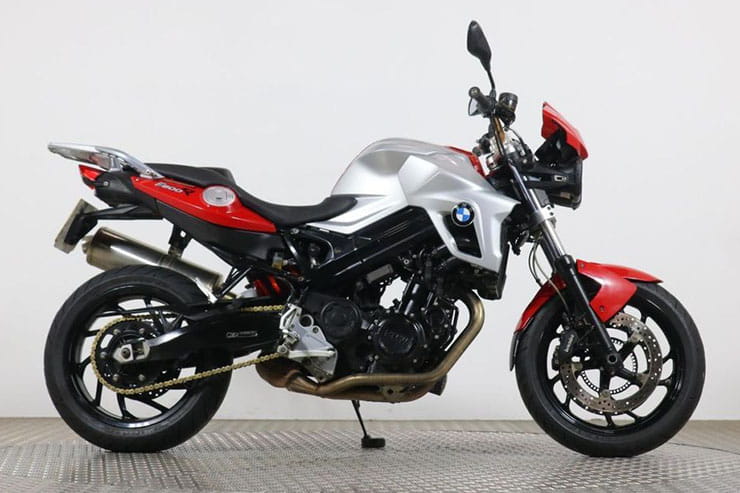 BikeSocial says: BMW’s F800R is hugely underrated. The 789cc parallel twin engine started life as a Rotax-developed motor in the half-faired (and also underrated) 2006 F800S – it’s a 360° parallel twin, to mimic the sound and feel of a flat twin, but that means the pistons rise and fall as a pair, so it vibrates. To counterbalance this, Rotax added a third, vestigial con rod running at 90° – which softens the vibes into a pleasant chuffing, but also saps power – the F800 series (half-faired S, adventure GS, touring GT and naked R) make around 85bhp. As a result, the F800R (introduced in 2009 and replaced by the F900R in 2020) isn’t the most naturally thrilling engine to use – but the bike is far from dull. BMW employed the services of motocross racer and stunt rider Chris Pfeiffer to showcase what a (much modified) F800R could do. But even the standard bike can get a proper boogie on because it’s light, steering is sweet, and the soft but supple suspension (usd forks were added in 2014) and decent brakes (ABS was an option in 2009 but standard from 2012) aren’t tested by the motor’s output. So, you bumble about feeling smug about the F800’s ride and build quality – then, if you’re feeling naughty, up the speed a bit and enjoy ragging the ass off it. I think it looks good too – the italic spokes, the GS-style Patrick Moore headlights, and the colours (this bike’s in Magma Red and While Aluminium Metallic Matt) and the hint of quality in the matt aluminium bars and top yoke, the exhaust can, the general fit and finish. 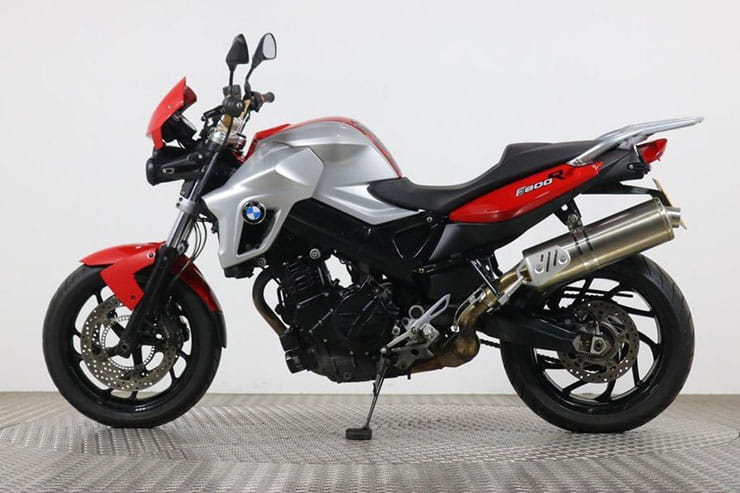 This bike is a good, solid example from www.superbikefactory.co.uk. With under 10,000 miles, the finish has stood up well with no obvious corrosion – the cockpit still looks fresh with the sparkle aluminium finish on the bars and yokes nice and clean. It hasn’t seen many rain miles and doubt it’s been out in winter. The bike hasn’t many extras – colour-coded crash bungs, a rear hugger and aftermarket adjustable levers – but that’s okay; it comes with heated grips anyway. And a full service history. As a character, it’s about as far removed from something like the Street Triple as it’s possible to get, but that’s not a bad ting – the F800R has a more sophisticated ride quality and dynamic. Lovely little bike. 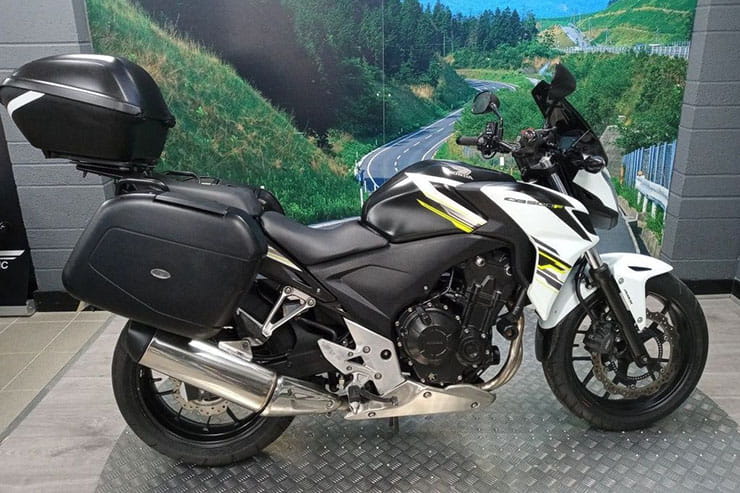 BikeSocial says: One of a flood of competitively-priced A2-licence compatible parallel twin middleweights to emerge after the credit crunch of 2008-2010, Honda’s Thai-built CB500 is a completely different machine to its air-cooled predecessor – but hits the same beats of classic Honda durability, convenience and ease-of-use. It comes in three variants – the vaguely adventure CB500X, the faired CBR500R, and the naked CB500F. The 50bhp 471cc motor is more fun than its numbers suggest, and it’s totally idiot-proof – if not as mischievous as, say, Yamaha’s MT-07 (which would be in this feature but is so close to the £4000 cut-off we can’t find any we’d recommend). 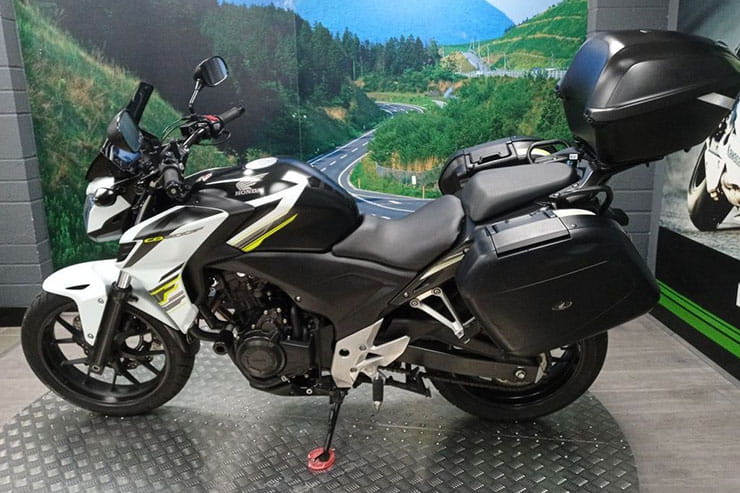 This bike comes in full touring spec – still technically a naked bike, but that big screen and set of Honda hard luggage is built for miles and miles of touring convenience. Or shopping. Be ace at either. Oxford heat grips too, always a bonus, a fender extender, aftermarket adjustable levers and a set of crash bungs. And it looks clean, hardly any mileage. This is the last of the original run of CB500s – in 2016 an updated model was launched with more aggressive styling to move the bike away from the slightly hum-drum image it attracted, and a peppier motor with a larger fuel tank, but the basic package was pretty much the same. The advert says the bike has been lowered – if it’s been lowered with longer tie-bars, that’s easy and cheap to rectify.

A middleweight naked is exactly what it sounds like – for this collection, we’ve chosen bikes between 400 and 750cc. While there are fine, well-cared-for middleweight nakeds out there – first bikes, careful owners, low mileages – there are also a lot of scruffy naked middleweights out there too. These are the bikes that are commonly used for all-weather commuting which means they may or may not rack up insane mileages and probably don’t get used hard, but they get used often. Corrosion and general wear and tear will be commonplace, so get a good feel for what you’re buying.

We’ve taken examples from Facebook, Autotrader, Ebay, Gumtree, and from dealers such as Superbikefactory.co.uk – but remember these specific machines are for illustrative use only will probably be sold by the time you read this.