Grand Designs Kawasaki: our £1k ZZR suffers on the dyno 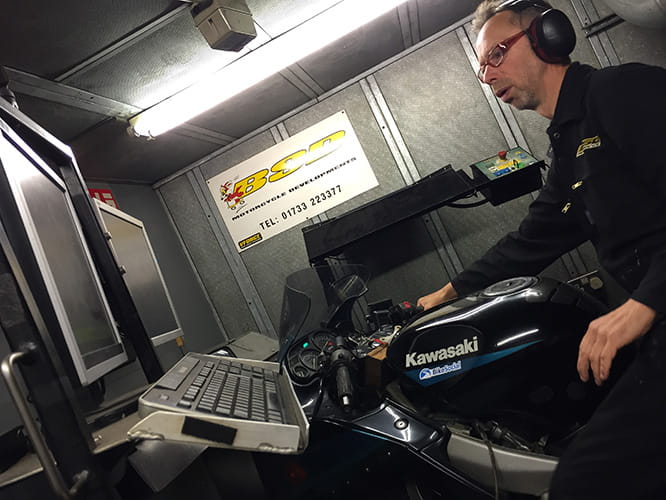 Welcome to the second intallment of Grand Designs: Kawasaki. In the first episode we found ourselves a popular mid-capacity workshorse with a £1,000 budget which not only had to pay for the bike but also had to cover the cost of getting it through its MoT and making it reliable to ride. While Bike Social's Marc Potter and Michael Mann cruise around on brand new long-term bikes in the shape of a Ducati 1299 Panigale and a Honda Africa Twin respectively, our man, Scottie Redmond, was set the challenge of finding an anti-long termer. This is what he's been up to:

I’ve racked up a few miles on the ZZR since it landed in my life, and I’ve also been gathering an assortment of parts to make it better. One trip that I took was over to collect a new Honda VFR800 that I was going to spend a week with. It was the first proper run out that me and ZZR had enjoyed together. Hitting some rush hour traffic on the outskirts of Corby I watched nervously when the temp gauge needle started to head north. Old Kawasaki models used to often run hot, and I’ve owned various GPz and ZXR models that have had  manual switches fitted to kick the fan in manually. My pupils scan for such a switch, but before I had time to get too concerned in it clicked, the fan extracting unwanted heat from the cores of the radiator. The needle floated south again, another box ticked in the ZZRs shake down testing. The front brakes continue to cause me concern. On this trip they were borderline iffy, although on the plus side the rear brake is now sharper than a butcher’s knife.

Arriving to collect the Honda the ZZR looked like a very poor relation surrounded by the Honda class of 2016. Then something strange happened, the young lad dealing with the hand over of the the shiny red VFR got all excited about my steed. Being sub 25 and only recently passing his test, he was not only aware of the bike (that was almost as old as he was) but quoted me what insurance group the 23 year old Kawasaki is. 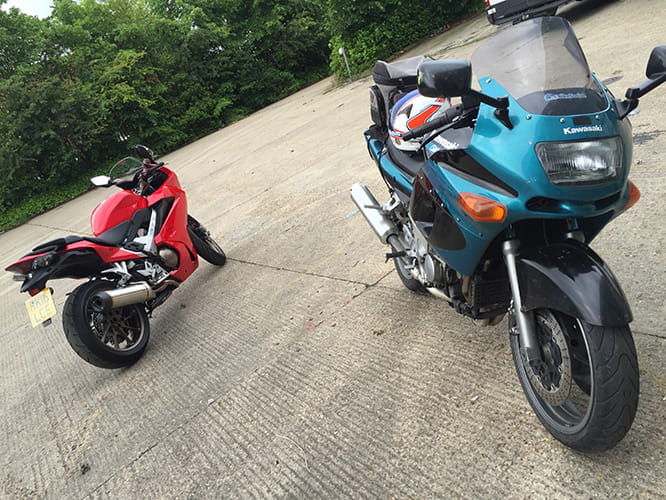 Fast forward a week and I’m dropping back the VFR and feeling anxious about getting back on the ZZR. My first spin on it was after I’d been riding a new KTM, which highlighted every fault that a 47,000 mile old machine could offer. My initial concerns were if it would actually start! Thankfully it struck up ok. Other than the poxy Kawasaki choke, from 0 to 7,000 revs and then warming to an idle, playing with the choke lever makes the throttle redundant starting the Kwacker from cold. It’s another classic case of they all do that sir.

Leaving the bright lights of Corby behind I was actually chuffed to be back on my own bike. The riding position felt so alien after the VFR. The rear shock on this bike, despite offering me basic functions is well and truly shot, yet it doesn’t create any unwanted handling issues in everyday situations.

With a pit stop for a cuppa on the A43, I stand in the June drizzle and admire my scoot. You might have noticed I’ve taken the belly pan off, it was rattling and getting on my nerves, I will pop it back on but not until I’ve done an oil change. The fact that the sight glass indicates the engine contains the required amount of 10-40 grade is good enough for me at the moment. 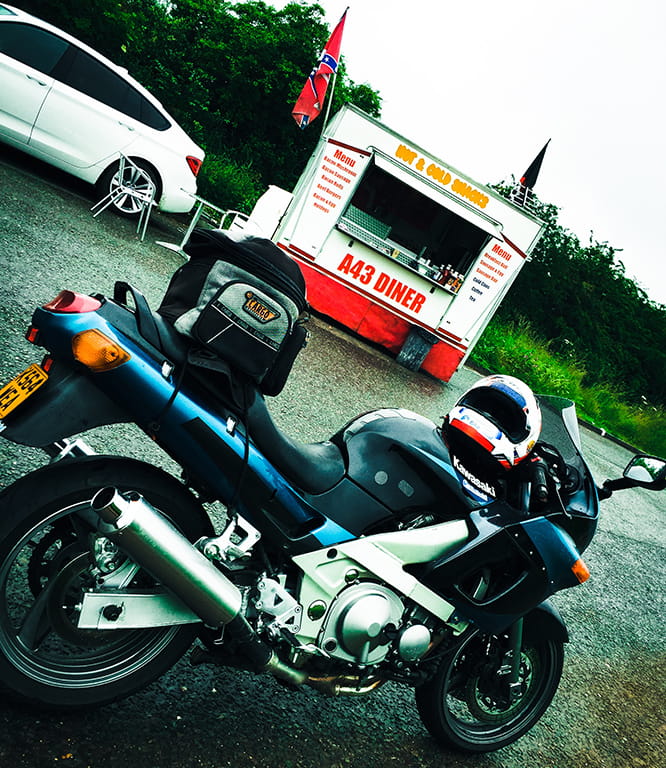 The first parts to be sourced and delivered are a pair of GSX-R600 K1 Tokico calipers, which have been waiting for my attention for over a week now. I have been thinking logically though, and have bought a master cylinder from a slightly earlier GSX-R600 variation, it’s off a 98 SRAD. I tried to buy one locally from a bike breakers, but in this eBay age there’s no actual bike breakers in Peterborough, the only one that sprung to mind resulted in a wasted visit after arriving to find that their supplies of parts were buried in an outbuilding, and unavailable to view or purchase. Back home I surfed eBay and found what I needed for £30 delivered, until it arrives I’ll make do with the inferior stopping power that the original set up offers me. 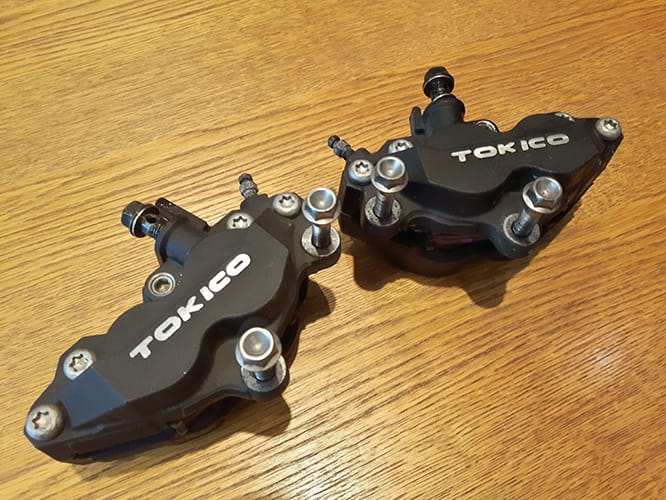 Before I turn my attention to the engine, I wanted to know how many horses are left galloping inside the ZZRs crank cases, so I rang BSD my local dyno centre and booked the Kawasaki in for a session on their Dyno Jet dyno.

D Day arrived and with an 8am slot I was up bright and early. Arriving at the BSD workshop on the outskirts of Peterborough, I took a guess at what BHP is left in the Grand Designs Kawasaki. When new it would have pushed out somewhere between a 90 and 99bhp depending on whose propaganda you read and believed. Mark Brewin came outside to wheel the ZZR in. Immediately he spotted a poorly fitting airbox lid and we discussed the merits of aftermarket exhausts. The Delkevic headers on our bike raised Mark’s eyebrows, which was not a good start. On the plus side though our chain was adjusted to the right tension and there was enough oil in the engine to permit a dyno run.

I had guessed that this bike was putting out around 70bhp, a conservative figure, but based on having covered a few hundred road miles. Mark looked at the history on his dyno. He’d tested plenty ZZR600s in the past, ranging from a new one for a bike magazine and a customers 2006 model. There were also a few non standard bikes, nothing too racy,, just aftermarket pipes and carb mods. None of them had broken the 90bhp barrier, 82 horses was the strongest. I suddenly had a feeling ours could be the weakest? 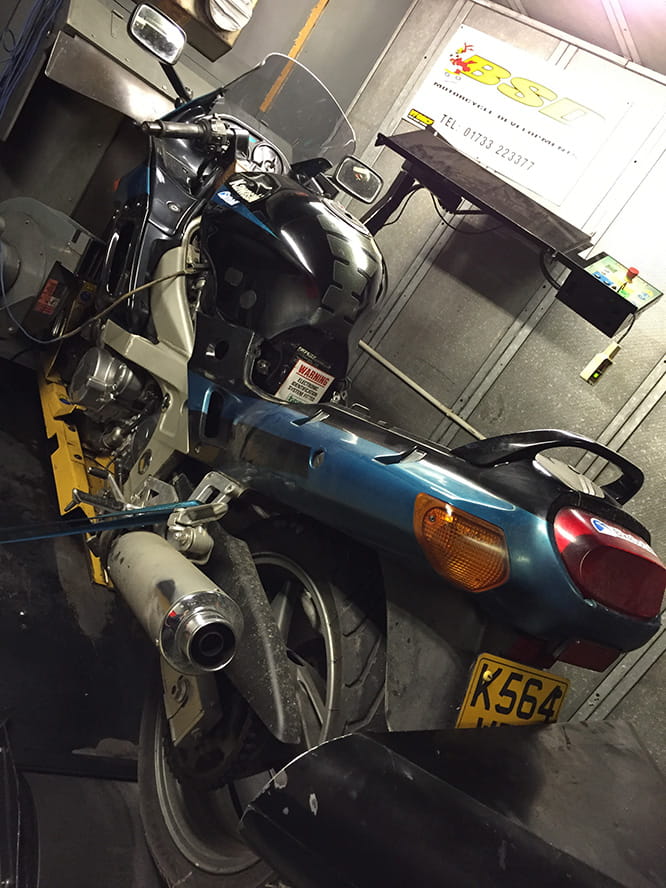 With the ZZR strapped to bed like an unwilling participant in a Fifty Shades of Grey remake, we donned our ear defenders and Mark wound the ZZR up. Fifty shades of smoke is what happened next, the extractor fan thankfully removing the exhaust fumes. I watched with interest at the digital display, with the screen keeping me up to speed with the punishment being administered on the bed. Mark did three runs, the first one was aborted due to a poor pick up from his wires to the coil on the ZZR. With a better connection established we went again. The good news is that the Kawasaki didn’t blow up, so no broom or cement dust was required, yay.

There’s been lots of talk lately about losses, the Remain campaign lost the referendum, England lost to Iceland in some football game but none of these results hurt like this, our ZZR had lost lots of horses. The stable door must have been open for ages, the best of our trio of runs delivered us 56 nags. Once Mark and myself stopped laughing we took a closer look at the stats. I had been confident it had more gee gees than that, after all on the road it had felt ok, and not once had I felt I was riding a power cut 600. The power loss all happens after 10,000 revs, the redline is at 14,000, where the ZZR should be charging like a bull, it instead limps like a lamb to the slaughter. Up to the 10,000 rpm mark it’s actually churning out a pretty healthy power delivery, which is why on the road it feels ok. I haven’t really wound it up to 14,000 revs that much, with a strong midrange and daily mooching I’ve been riding the ZZR where its poke lies. 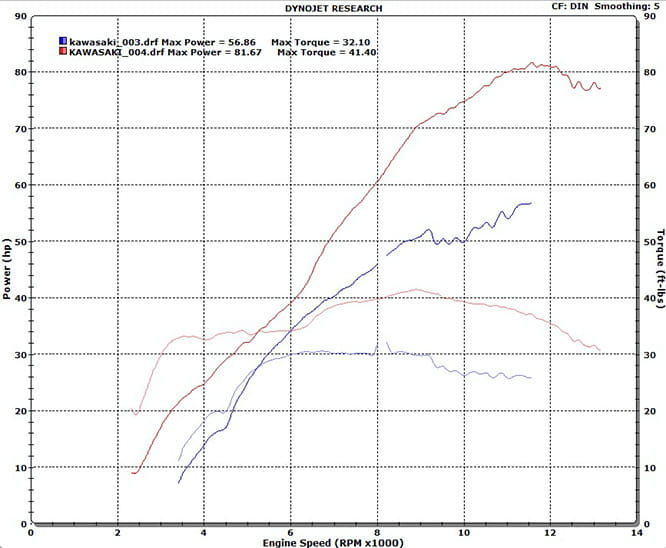 So what’s stealing our horses? The Kawasaki rustler is more than likely a combination of those aftermarket header pipes and the poorly fitting airbox lid. Mark explained how once the Kawasaki calls on its main jets its getting dollops of air, making for a lean mix and loss of power.

We avoided the temptation to start fiddling, we could’ve sorted the airbox issue and tried again but I reminded myself that I was here to get a baseline figure. With our giggling almost subsiding we wheel the ZZR back outside. I have a few ideas that I’ll implement asap, with our one eye on rounding up the lost horses and one eye on the budget. In the meantime I’m going to look after the 56BHP that we have and make sure we don’t lose anymore.

Stay tuned for the next installment of Grand Designs Kawasaki.