OBJECTIVE: buy a used motorcycle and gett it ship shape with a £1,000 budget

How much motorcycle does a grand bag you? The quick answer to that is not too much, but there are bikes out there, you just can’t be too picky.

I have never owned a new bike. The closest I ever got was drooling over the Suzuki TL1000S in Eddy Grimstead’s showroom in 1998. They only had green ones and as I don’t like green, that was the end of that. I am pleased about that now looking back.

Modern bike sales are booming and motorcycling is back in fashion.

Sat with a 1,000 quid and the world at my fingertips I start my search.

I had no particular model in mind, but knew what I didn’t want. The list of bikes not on my shopping list basically boiled down to anything sub 600, anything with less than four cylinders and nothing too sporty. Basically because I plan to use the bike on a daily basis, and my days of crutch rocket ownership are all but behind me, well possibly.

I needn’t have been too concerned with my search details set on Ebay. I sat back and awaited the endless options to fill my iphone screen. My search results revealed what I had suspected, the sub £1,000 bike market is one where there’s not too much choice.

Being sensible I wanted to avoid buying a non running project bike, despite a few contenders in this category, I stuck to my guns.

Ideally I was after something that I could jump on and ride. It needn’t be too pretty but something fundamentally sound was the dream.

A big old 1987 CBR1000FH had my attention, at £500 start it went on my watch list. The Honda looked sound, but the exhaust would need replacing for the MOT. A classic five minute job that could have the potential to hide misery, mostly because the exhaust fitted was the original item. Undoing studs that haven’t turned for almost three decades can usually end in tears. Despite watching the clock tick down I resisted going against my gut instinct and bidding.

It sold for the asking price, one bid. 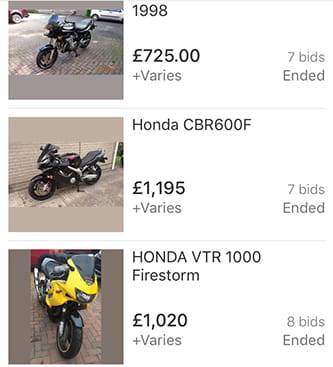 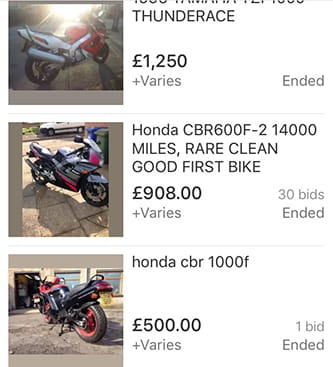 Other contenders included a Suzuki Bandit 600. It wasn’t too long ago that you’d find its bigger brother for around a grand, but those days are now long gone. The 600 Bandit was a serious option in my quest. The ones that stared back at me all looked very far from standard, ranging from poorly executed streetfighter attempts through to high mileage, low maintenance examples.

A Fazer 600 was also in my minds eye, the ones on offer were all over a grand. I did message one local to me and offered him a grand for it but he never replied.

Thinking outside the box I flirted with the Suzuki GSXF600. They were the only bike from this millennium to feature in my sub £1,000 search results.

I had hoped to find a VFR750, but there weren’t any near my self imposed budget, again a few years back you’d have had a pick of the things.

So many bikes have left these shores over the last five or six years, mostly going to eastern European countries, where the exchange rate at the time was in the favour of our Del Boy comrades. Once a bike goes out of the country it doesn’t come back.

The Honda CBR600 has sold by the ship load over the years and there were several within my budget. One really had my attention, it was on an auction, I saw it at about £800, it went for £908. Not too much over what I wanted to pay but it would have left me with £92 in my kitty to get it all ship shape.

Then I saw it, like a stray cat it found me. A Kawasaki ZZR600, not the rough first version, this was the E model, where Kawasaki had ironed out all the glitches of the original model. The handful of thumbnail pictures looked promising too, standard paint, even a stock exhaust. It was on Ebay with a starting price of £675 and no reserve. The advert was brief, the seller neither bigging it up or slagging it off. It also came with a long MOT and after a few questions to the seller he confirmed there wasn’t any horrors lurking. With several days on the auction I watched the item. In the last hour a bidder appeared, not wanting to get caught up in a bidding war on a 23 year old motorcycle I stuck my single bid in with a few minutes remaining, then looked away. Bingo! I had won the ZZR600 for £705. 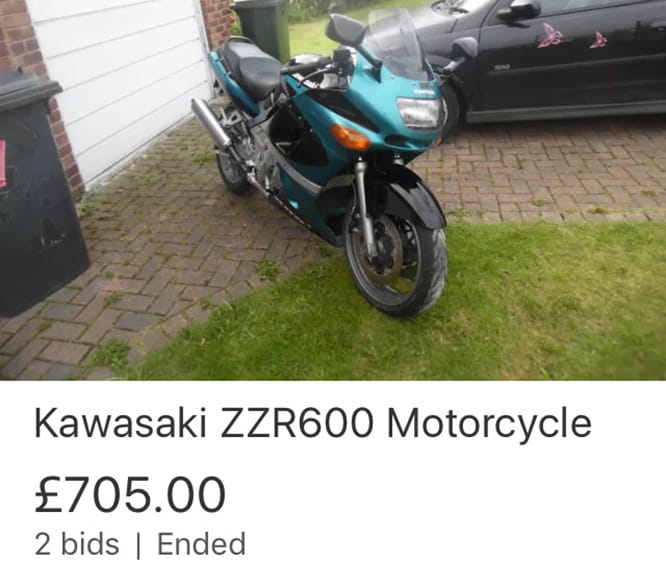 This isn’t the end of the story, it’s simply the beginning. Will my Ebay punt turn out to be a result? I do hope so, but we do have £295 remaining in the Grand Design kitty.

I shouldn’t have been so excited about getting the ZZR600, but I was. The buzz of buying a bike, if only they could bottle it.

My newest mate Pete who owned the Kawasaki had agreed to deliver the bike from Doncaster to Peterborough. With his text incoming at midday to say he’d loaded it up and was en route I counted out his money and sat tight. I had no concerns about buying the bike via eBay, with only a few phone photos for guidance. 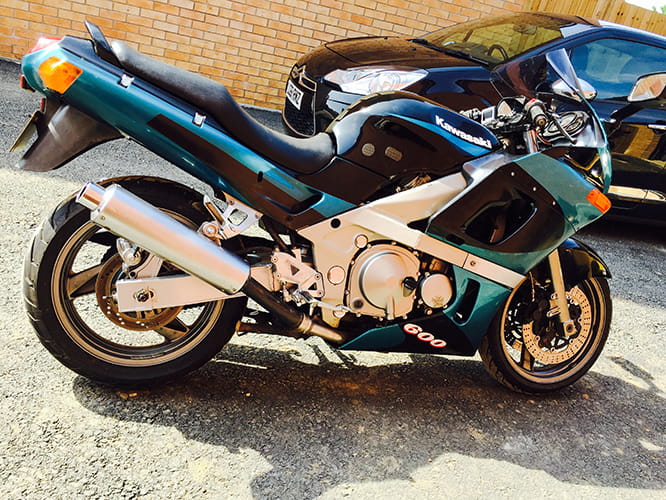 When Pete arrived we exchanged small talk, he’d only ridden the bike once since buying it late last year, a dodgy hip meaning his biking days might be up. Swinging the doors of his little van open lacked any sense of a big reveal, all that greeted me was a chunky rear tyre and arse end of the ZZR. Within minutes it was free and sat on the drive. I circled it a few times, like a big cat sizing up its next kill.

STEP 4: Find out what's wrong with it

The first things I noticed was the ample application of silver paint on the swing arm. They’d even sprayed the spindle which is daft really because it’s an alloy item on this model. The bodywork looked much better in the photos, but I had prepared myself for this, every digital photo of a bike makes it look lovely. That said, it wasn’t horrendous. From a few paces it looks acceptable, the closer you get the worse it gets. Mismatched fairing bolts do annoy me, so they’ll get my immediate attention.

On the plus side, tyres, chain and fork seals etc are all good to go, and behind the bellypan there’s some stainless exhaust headers fitted, that’s a real bonus. I had already budgeted for a replacement exhaust, but this is now funds that can go elsewhere. In short it’s a fair bike for a fair price, not a bargain but not over priced. With Pete’s van empty I parted with my £705 for the bike, filled in the log book and bid him a safe trip home.

I had started the bike briefly and was chuffed to hear no nasty noises. Before I could put it away I needed to give it a quick spin.

I wanted to check it had a gearbox that worked, and to see if it steered ok, I suspected it was all ok but just felt the need to do so.

Both fronts I’m pleased to say weren’t an issue, all cogs are present and correct and it all steers like it should.

I returned from my quick spin and realised the first area to get my attention will be the brakes. They lack any real bite, the front lever is almost back to the bar, and adjusting the span adjuster only made it worse. The rear brake felt very wooden, probably down to lack of use? 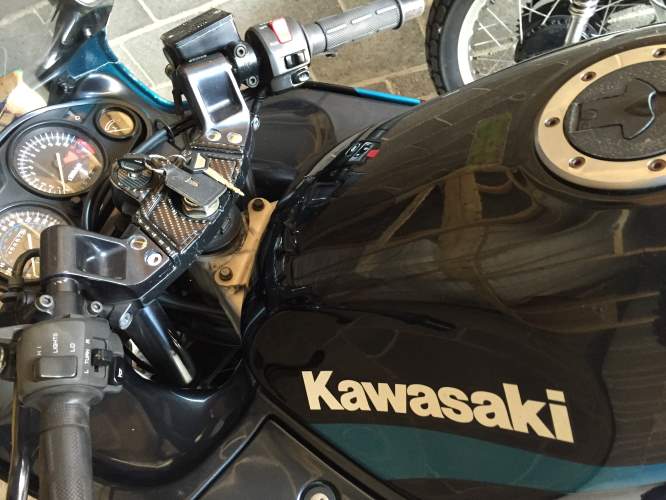 I will give the ZZR another ride before weighing in with the spanners, but my gut instinct is I’ll be faffing with the brakes sooner rather than later.

On the whole I’m pretty happy with my eBay punt. There’s always going to be plus and minuses with any used bike purchase, but this venture feels like we’re off to a good start.

Like the gauge on the ZZRs huge clockset, my tank is half full. 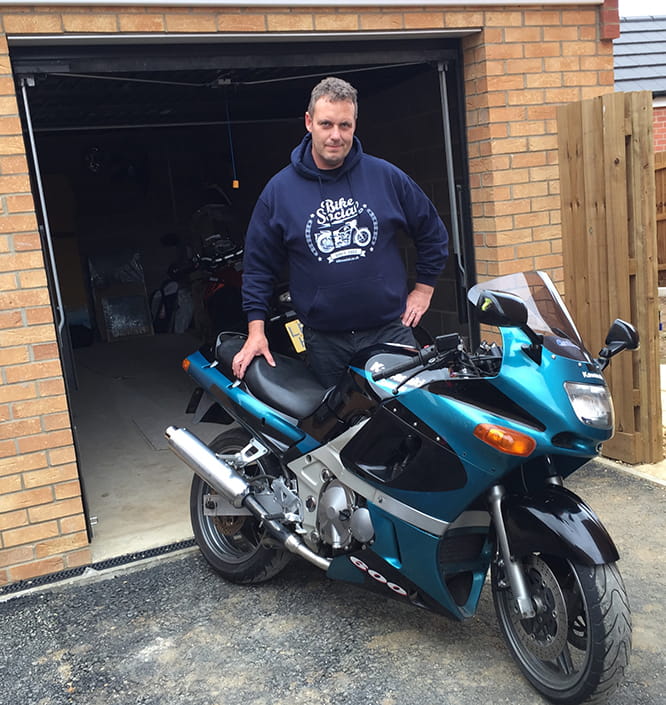 *Stand by for updates on how far we can stretch the remaining £295 from our budget getting the ZZR ship shape.

It was a land of confusion in motorcycling's history. The Honda Fireblade arrived in 1992 and caught the other manufacturers out big time. Suzuki had an overweight GSX-R1100 heading its fleet and Yamaha’s FZR1000 Exup wasn’t much better. Honda showcased their brilliance in the Honda NR750, the oval pistoned creation was launched in '93. The Ducati 916 was a year away, I wonder where Tamburini got the idea of under seat exhausts from?