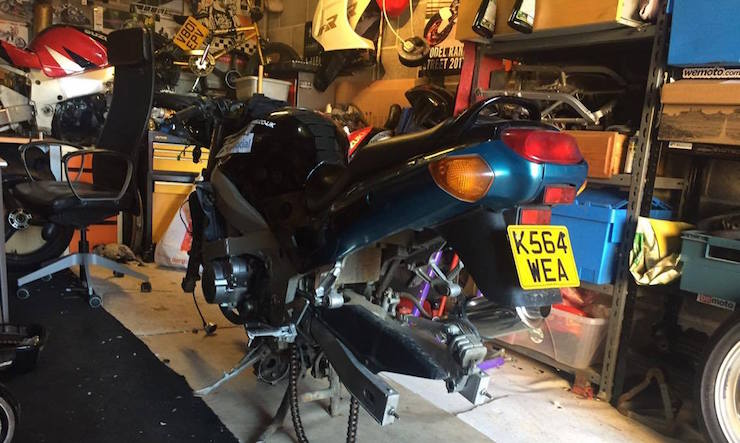 The ZZR600 is one of those unloved models, the sort that through no fault of their own got overlooked, which is why they make a great used cheap and cheerful buy.  I paid £701 for this one last summer. We’ve had some fun and games and along the way I’ve done my best to try and make it a better bike. Since January though, I’ve managed to overlook the overlooked bike. Despite trying to tie up with my mate to carry out a compression test to see if that’s why the dyno only gave us 57 horses when we visited it, we’ve not managed to get myself, him, the ZZR and his tester in the same place at once.

With a few new bikes entering my life I’ve had less time to ride my rusty, sorry trusty, steed. In fact the ZZR is now sat out in the garden and not even warranting garage space. With Spring about to be sprung my good intentions lay in tatters with the ZZR factoring less and less in my plans for 2017. This is because I really need a daily bike that’s a bit newer, a bit fresher and a bit bigger in engine size. I had bought a rack and top box for the ZZR but never fitted them, mainly because deep down I knew I needed to replace her. It’s not all doom and gloom though and every negative carries a positive, you just have to look for it.

When a friend suggested finding a project bike for a race class I wasn’t overly interested in helping. But after hearing how this series takes road bikes and races them around oval circuits, I realised that I had the answer to his prayers, so the ZZR is going racing! The series is called inappropriate road bike racing. The photos that I’ve seen so far from their Facebook page shows anything from Kawasaki ER-5s and scooters right up to KTM road bikes being ragged senseless.

The ZZR will need a few changes and the rules will need a read up, but I’m smitten, so let’s see if there’s life in the old dog yet!