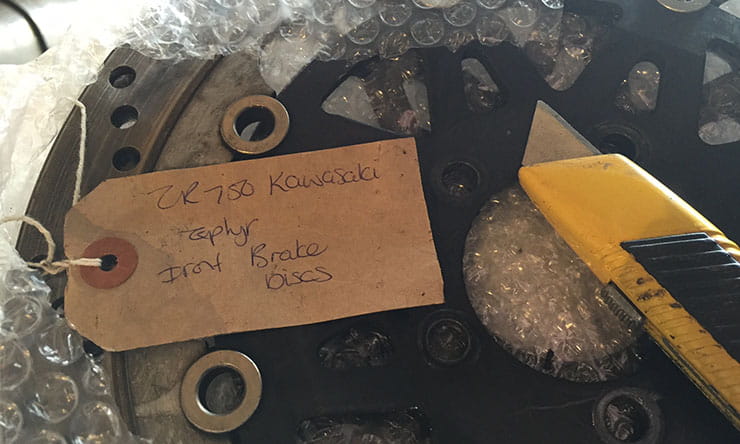 After weeks of searching, Scott's finally found some decent brake discs for the ZZR...

Weeks of looking on eBay for ZZR600 front brake discs had started to leave me feeling slightly fed up. All that seemed to be staring back at me were either new ones that were priced way out of my self imposed budget, or used ones that looked no better than the warped ones I wanted to replace.

A cheapish but complete project bike appeared locally and became a distinct possibility for joining mine in the garage. Thoughts of raiding it for discs and a few parts before selling the rest on barely had a chance to formulate when, thankfully, the listing ended early, probably after being sold outside of the auction? With days having turned into weeks, I had to do something to stop that becoming months. Like the path I trod when needing replacement brake calipers, I looked to other models to deliver me the happy ever after solution to my juddering brake woes.

Kawasaki have a variety of bikes that use the same 300mm sized disc that they kitted the ZZR600E out with. I found a list of models that could help to widen my search potential for some second hand braking power. Some models that had the same disc size fitted were more popular than the ZZR, which is not ideal when trying to grab some discs at a bargain price. ZXR400 used discs were listed at higher prices than those for a ZZR and there weren’t any up for an auction either. It appeared to be that every used brake disc in the UK was on ‘buy it now’ listings.

Having chatted to a mate about Kawasaki Zephyrs over a floury bap one lunchtime, I searched for a pair of Zephyr 750 discs and bingo! There’s not much love around for those old retro Kawasaki models, but suddenly I loved them. The seller had a decent pair of discs with an asking price of £34.99, which is well under half the price of used ZZR ones. Even with an extra £9.95 to cough up for postage, I was still within budget. All in all, a result! I hit the button, paid the man and went to get the front wheel out of the ZZR600, such was my enthusiasm. I had a few days for my enthusiasm to dwindle though, as it was almost a week later when the Zephyr discs landed on the doorstep.

I had been proactive in my lost week. I'd found a speedo drive that unexpectedly came complete with a speedo cable. It’s amazing how much that free crusty cable made my day. Budget biking creates moments like this. Armed with discs and speedo drive, I rushed off to fit them.

The old discs came off okay. One was on really tight, the other had five fairly easy to crack disc bolts. Is this another indication of this bike having been in an accident? Thoughts of my previous discoveries of replaced parts run through my mind. I gave the wheel a good clean and took off the sensor that I’d fitted for the digital speedo, which had been a waste of time, effort and funds. The new discs also got a good rub with the dirty rag. This gave me an opportunity to look at them close up. The only difference from the outgoing ZZR600 rotors are the holes drilled in the braking section of the disc. These have a different pattern. It’s not uncommon for cracks to appear between these holes on heavily used discs. These are both OK in this respect. Used discs can also end up with grooves worn in them, usually from knackered brake pads. Again it’s a clean bill of health on this front too. At last pride in my machine was returning.

Working alone is bliss at times, and this was one of those days, right up until I realised I couldn’t be at both ends of the ZZR. I needed to put weight on the arse end so I could slip the wheel in, unfortunately the huge front mudguard meant I couldn’t. I was going to take it off but instead swung the ZZR around on the bike bench until its forks were hanging overboard. It looked dodgy but I still managed to get a photo.

The rest of the job was straightforward. The moment of truth arrived. Had I cured the brake judder or just bought someone else's knackered discs? A quick spin around Peterborough revealed I now have a ZZR600 that stops with no issues, and even better the speedo is working too. Having killed two birds in one go my attention returned to the other jobs on the ‘to do’ list. The exhaust gaskets are next to get my undivided attention, that’s only after I find them. I could've sworn I’d put them in a safe place…? 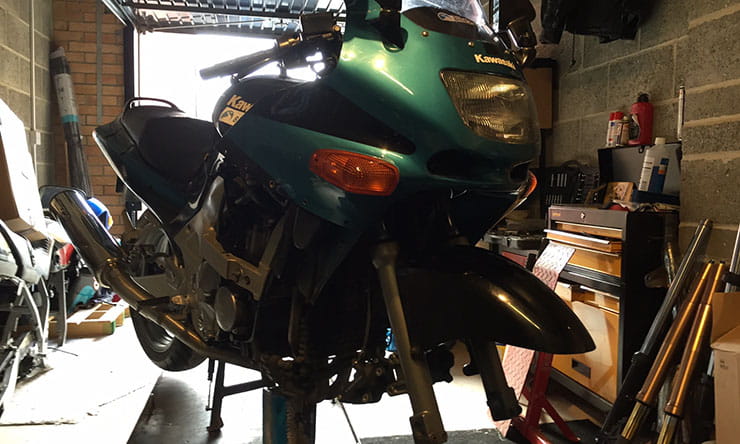