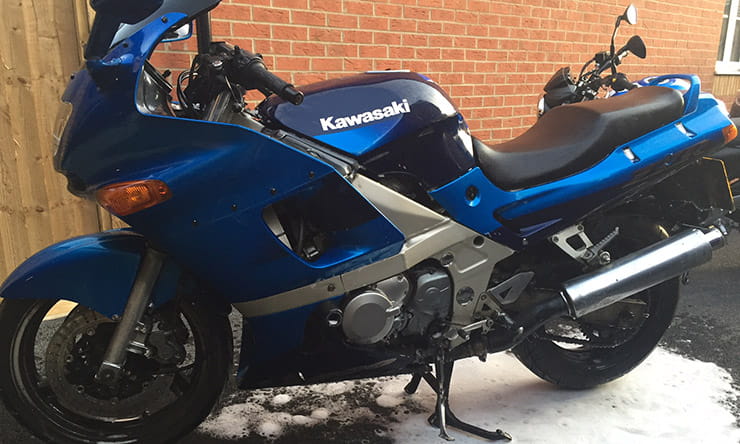 Yes, you're right - that's not our Grand Designs ZZR600 pictured above.

Having spent the summer fiddling with the ZZR600, and riding the bike through the mild autumnal weather, I am under no illusion though that Jack Frost isn’t too far away. With the end of summer time, the dark evenings focus my mind on what I need to do about getting the ZZR600 winter proofed.

We've already fitted some effective Oxford muffs but another thing that’s been on my brain has been sorting the saddle out. The original cover already had several pieces of gaffa tape applied to its surface when I bought the bike back in June this year, and I’ve added a few fresh pieces of my own. The fabric is worn out. With more use comes fresh splits, which is ok during the dry but when I rode it in the rain recently I ended up with more than a soggy saddle. Anything that detracts from my riding pleasure isn’t anything I want to think about, so off I went to eBay to look for a replacement seat. I didn’t even bother looking for a seat cover as I have trodden that path in the past and upholstery skills aren’t high on my CV. Like searching for discs, my quest for a saddle was fruitless. Another reel of gaffa tape and some waterproof trousers was looking like my way out, then something unexpected happened.

I had mentioned in a previous instalment that I had toyed with buying another ZZR600 to raid for parts . Well, be careful what you wish for, I am now the proud owner of two ZZR600s. It’s the dearest seat that I’ve ever purchased. The bike was an unwanted part exchange at my local dealers. The 02 number plate is way too old for their showroom, but it helped to shift a newer bike, so in to their life it came. It went to auction but came back unsold. I had only popped in for a cuppa on a ride out on my ZZR600. It was also the dearest cuppa that I’ve ever bought!

So what’s it like? It’s loads newer than mine, in fact I wasn’t aware Kawasaki still knocked them out in 2002? Other than a slightly different clock set, it’s the same as my 1993 model from what I can see. The new one has only done 20,000 miles but is fitted with a Datatool alarm. I have never been a fan of bike alarms and sure enough it had drained the battery. After a few failed attempts to tempt the ZZR in to life, we found another battery in the workshop to fit to the Kawasaki. At last it fired up but only after witchcraft with the alarm fob.

I was already mentally stripping the bike. The seat is immaculate, the tyres look better than mine and maybe I might use the bodywork too. It’s much cleaner than the bodywork on mine. I need to sit still, do some sums and see if I can get the columns to add up. I’m certain they will, so if you need any parts for a ZZR600E I’m your man!