Grand Designs part four - unleashing some ponies with a £50 Micron After upgrading the brake calipers on our 1993 Kawasaki ZZR600, bought for £705 earlier this year,  Scott's been back online in search of some new discs and an exhaust to breathe (or should that be exhale?) some new life into the old dog. Take it away Mr. Redmond...

In between working on the ZZR600 I’ve also managed to rack up some miles and get to know my bike a bit better.

The brake upgrade should’ve cured my issues but yet again I’ve had to adapt my riding style to suit my machine. The front discs are definitely warped. Applying the brakes from speeds of over 50mph reminds me of this and at speeds over 70 (when I'm on private roads, of course) the shudder is so fierce it shakes the clocks quite violently, not good.

I’ve been looking for replacement discs but so far haven’t found any. New ones are out of the question, as my budget won’t suffer that, and for any decent rotors you’re looking at prices somewhere in the region of £200 upwards, or in other words around a third of the value of the ZZR. On the plus side, Kawasaki fitted the same size disc to loads of other models of the era, from the ZXR400 to the Zephyr 750. Other than cosmetic differences in disc centre colour or drilled patterns on the rotor, any of these bikes could help solve my shakes. The downside is I am entering the world of used parts, and it’s pot luck to whether I strike it lucky or end up buying something that’s more warped than a Krankies tribute act.

I took a wander to an auto jumble to see if I could find anything, but sadly my mission was fruitless. I am hoping to avoid the hassle of eBay, such is my lack of confidence in finding some decent discs. In the meantime I’ve just got used to the warped discs, but I know I need to sort them before getting side tracked by some of the other jobs that I need to do.

The dyno run showed that the ZZR was lacking horses, with only 56 remaining of 80 it was born with. Mark Brewin at BSD confirmed my suspicions that the Delkevic header pipes could be holding our engine to ransom. I left BSD and started searching for a different exhaust. I obviously didn’t want to buy a new one, as this project is all about doing things on a budget. A search for ‘ZZR600 exhaust’ on eBay delivered me a stream of silencers in various conditions but not much in the way of full exhaust systems. Used standard headers are non existent, they’ve all been reduced to compost by now.

A Motad four-into-one system appeared on an auction, perfect. It was in Norfolk and the seller wasn’t prepared to post it. Even more perfect as that would reduce interest in the item for sure, perhaps allowing me to pinch a bargain. I watched the £4.99 listing all week and showed my hand with minutes left to go. I wasn’t alone. With a flurry of bids from me and other desperate ZZR owners came in the dying seconds of the auction and I was pleased to see that I won the exhaust for £21.00, a bargain. A week later the exhaust sits in my life, but in the meantime I’d also chanced upon a full Micron system. Given the choice the Micron won. The full system set me back £50, and other than a few dings on the road legal silencer it’s a pretty solid system.

Fitting the exhaust was pretty straight forward. Myself and my mate Shroom set about the task one evening. Thankfully all the bolts gave themselves up without any hassle, and other than us trying to cut a corner by leaving the fairing sides on, the Kawasaki gave us no headaches. With the fairing panels removed we were able to access the exhaust studs easier to fit the Micron headers. The first attempt at lining the headers into the ports didn’t go too well. We could only get one pipe to seat properly. After some 'to me, to you' action we took it off and lined it up with the outgoing Delkevic ones. The Micron headers creaked into their new position, resulting in a successful second attempt of fitting them.

Taking the fairing panels off also revealed a few secrets of the ZZR's past. Both panels have been plastic welded inside,and this will have been as a result of an accident. There’s also lots of silver overspray in places it shouldn’t be. On the plus side, the radiator and oil cooler are both in good shape. Maybe they were replaced after the crash, or maybe let’s not dwell on that point...

With light fading and darkness arriving we nipped up the exhaust bolts and called it a night. We left the fairing panels off in case we needed to fiddle with the exhaust again. Once we feel happy it’s all bedded in ok they can be refitted. Starting it up we were greeted with that sound of a blowing exhaust, not terrible but defo not a hundred percent right. The exhaust itself is really quiet, the huge alloy does too good a job at keeping things hush hush.

A quick spin was required and initial feelings are that it’s revving cleaner, especially higher up the rev range, exactly where the dyno showed that the power curve nosedived. I’ll need to do more miles and sort the blowing from the headers before presenting the ZZR back to the dyno. In the meantime, having spent a month looking for an exhaust to buy, I now have two to sell... 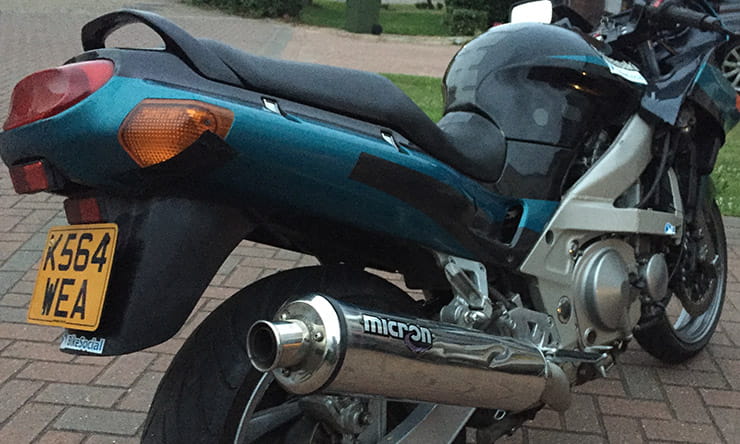