Braking bad - our £700 Kawasaki gets a £60 caliper transplant 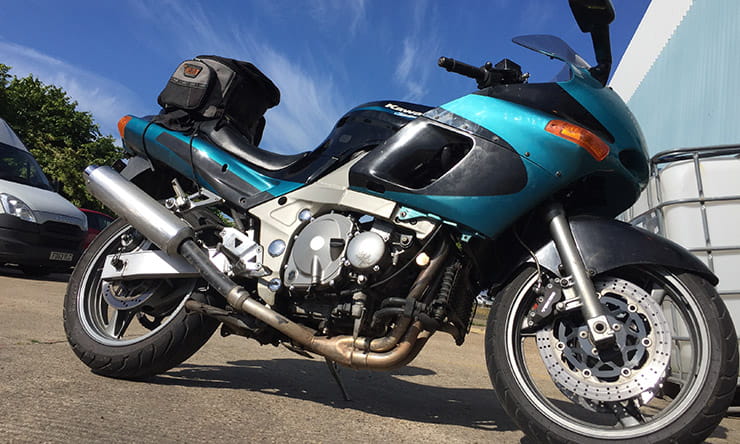 Remember the 1993 Kawasaki ZZR600 we bought for £705 earlier this year? Well Scott’s been back on eBay and back on the spanners to find some extra stopping power to rein in those 56 horses. We’ll let him take up the story…

The internet is brilliant, without it you wouldn’t be reading my words right now. Thanks to the world wide web I discovered that there’s a whole stash of calipers that are a direct fit to the ZZR600 forks. I was drawn in, with dodgy brakes to sort, the thought of replacing my old Tokico calipers with something more modern really appealed.

I could’ve got a seal kit and rebuilt my brakes, but I found a list of suitable calipers from other models that would get me out of trouble instead. After chancing on a pair of GSX-R600 K1 calipers that were delivered for £55, my question had already been answered. I found a Suzuki GSX-R600 master cylinder too, but needn’t have bothered with that, let me explain.

Removing the brake hose from the old master cylinder gave me my first problem, the Suzuki master cylinder uses a different thread to the Kawasaki item. With a fruitless rummage in my bolt box, I realised the Kawasaki item would have to stay. Not a great start to the classic ‘five minute job.’ The old Tokico calipers came off with no issues. They actually looked ok and had newish pads fitted, making it even more baffling as to why they were so rubbish at hauling me up.

The new Tokico calipers are indeed a direct fit. They share the same 63mm spacings, but the next problem presented itself. The outgoing Tokico stoppers are held on with 10mm bolts, while the incoming ones use 8mm bolts. The easy way around this was to make a sleeve. I was aware of this issue and had spent an hour or so earlier in the day running around various hardware stores trying to find some 10mm steel tube. It was like that old Yellow Pages advert, where JR Hartley tried to find a copy of his old book. I even tried the guys at Motorcycle Workshop in Peterborough, who also shook their heads but at least pointed me in the direction of B&Q, who had the holy grail in stock.

I only really needed 3” of the stuff, but £4 later and I had a metre length of steel tube. With the sleeves cut and filed, the 8mm bolts could be offered up. The new calipers fitted a treat and the bike already had Goodridge braided lines fitted, so they were left alone.

The fun of bleeding them up could now begin.

With the shock of the dyno session having sunk in I thought I’d better start the search to find the missing horses. 56BHP is a pretty shocking figure. The thing is, when riding the bike it doesn’t feel like it’s suffering, so what’s going on?

The air box lid was an obvious place to start our search. It was ill fitting at the back and removing the tank gave me a sinking feeling. The sight of parts marked in a bike breaker’s pen is never a good thing. The air box lid had been daubed with ‘ZZR600 N reg’ but our bike is a K plate. I’m sure that there’s a K&N joke here somewhere.

Removing the lid showed no further horrors. The air filter looks newish and there were no foreign bodies lurking inside. Trying to get the two halves to marry up proved impossible and there’s no obvious reason why they won’t seal up perfectly. I have two options, pluck a used air box from eBay and swap it over or just seal this one up with duct tape. Have a guess what option is the most likely?

On the plus side the ZZR is quite clean under the tank, and the carbs are clean too.

I noticed that the right hand coil isn’t attached to its mounting plate and it looks like the bolts have snapped? I’ve no idea how that’s even possible, seeing as it works all ok so I’ll just pretend I haven’t seen it.

One job keeps leading to another. A reel of duct tape is now top of my shopping list. 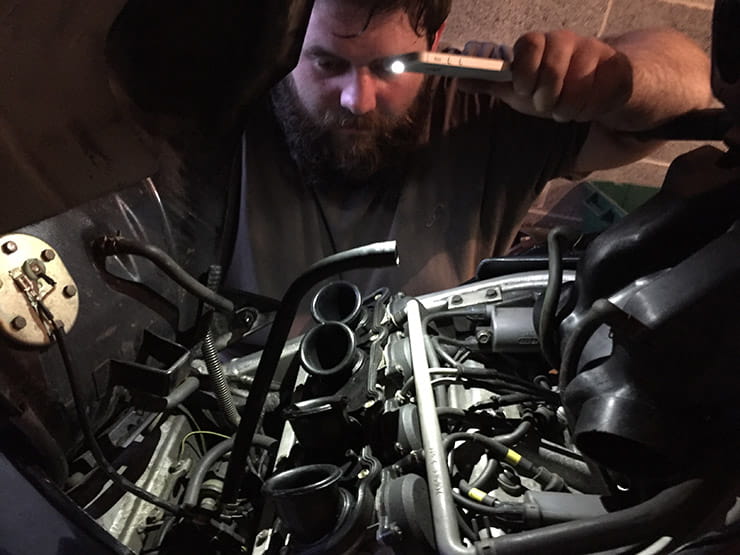