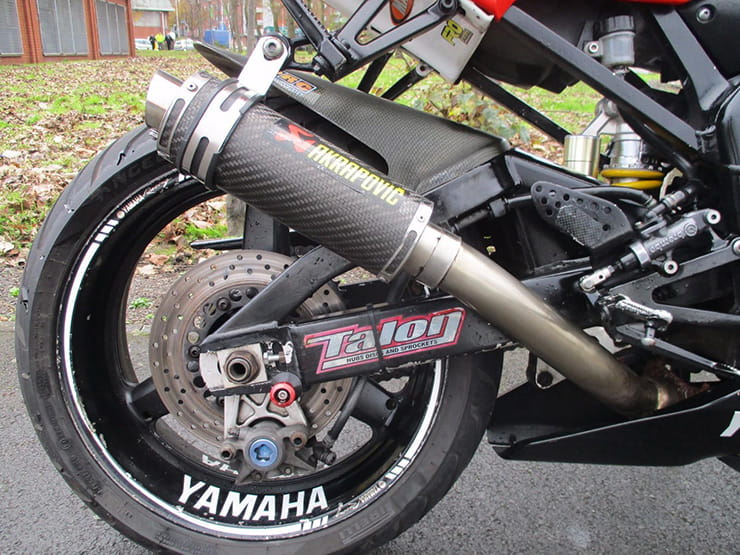 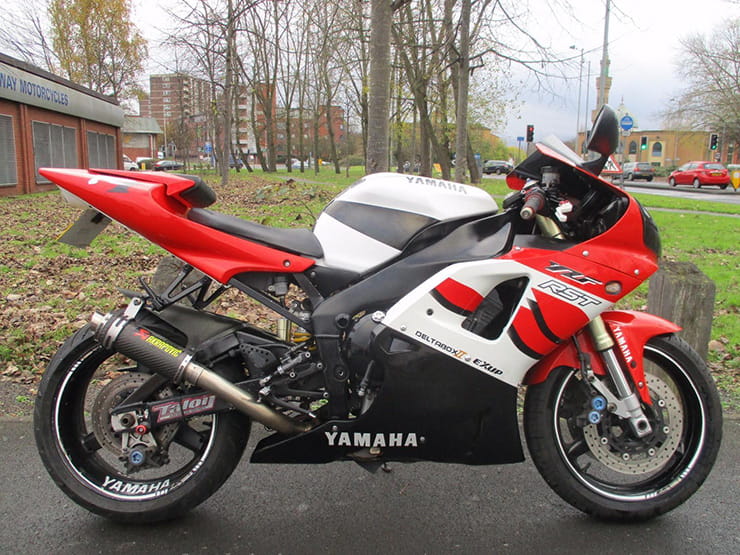 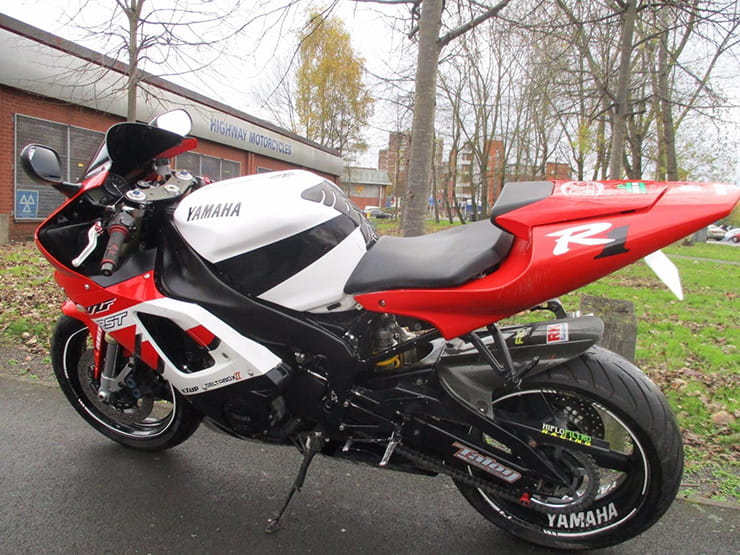 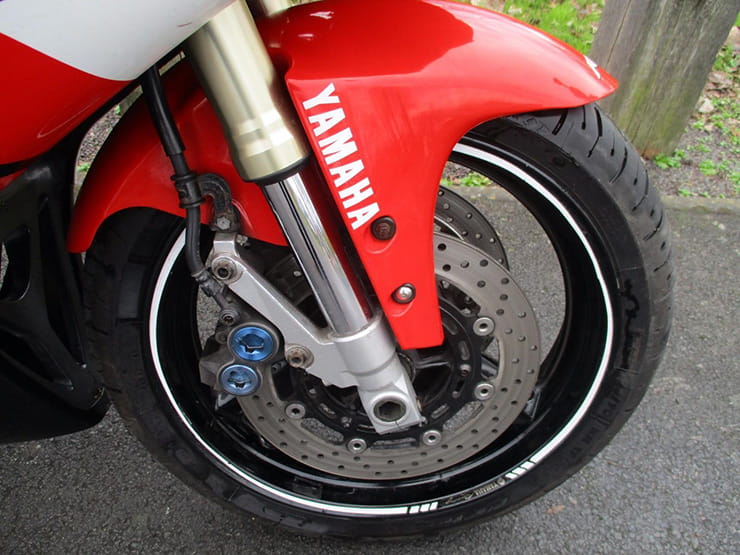 First the good news. This bike is being sold by Highway Motorcycles in Wolverhampton, who we know and trust and they describe it as ‘not a minter, just a well-used example’. They have another, more typical example on sale for £3999, which gives a quick indication of how they are valuing this one.

On the surface it’s got that ‘dog’s dinner’ covered in stickers, bit-too-lairy look. When you look a bit closer it’s actually pretty much a standard bike that’s had a busy life.

The bodywork is mostly original (although the tank is the wrong colour – why did it have a new tank but still be on the original fairings?) and it appears to be still in its first stage of tatty, i.e natural decay rather than tarted up and then fell-to-bits.

The anonymous stubby end can has an optimistically-applied Akrapovic sticker that’s trying to make a break for it and the tail tidy with recessed indicators probably looked better in the brochure  than it does in real life. The exhaust downpipes appear to be original – you can see the EXUP valve poking through the bodywork. Here’s hoping it’s still moving freely.

36,000 miles isn’t too much for an engine like this. They’re strong motors and if it were the same unit in a Fazer 1000 no one would think twice about that mileage.

The rear shock looks like the original one as do the rubber brake hoses. Both will be past their best. Chances are the fork oil hasn’t seen daylight since 2002 either. Someone’s lost one of the original mudguard bolts at some point (why did the guard come off?) and replaced it with whatever suitable bolt they had lying around and the discs look like they’ve seen better days.

First generation (1998-2000) R1s are starting to get pricey. These 2000-2002 models were a minor update and have zero collectors value but do have some useful revisions and tweaks that improved performance and reliability. Another plus is that, unlike the 1998 bikes, most of them didn’t end up upside down in the gravel at a 1998 track day because the standard tyres on later R1s were much better than those on the originals, so they are a bit more likely to be HPi-clear. Even at this price, a data check is essential on a bike like this.

Finger poised over the ‘buy-it-now’ button. This is either a cheap YZF-R1 that wouldn’t take too much to make it right or a potential money-pit where you’ll put one thing right (the brake hoses) only to find it highlights something else (the need for head bearings and a front suspension overhaul). And then you swap the end can for a bargain-buy standard item only to find it now needs the carbs re-jetting. And so it goes on.

Which one of the above is true depends on whether you finished that fourth can of Newkie Brown.

On this occasion we didn’t.

Did you buy this bike? Let us know if you did, we’d love to come and ride it anyway to finish off the story. Contact us at: enquiries@bikesocial.co.uk