This is second part of our challenge to see what gems we could find with a target price of £3000 in the small ads and we found...

1999 Suzuki Hayabusa
Everyone should experience the sheer mind-bending acceleration that the incredible 1298cc Hayabusa motor delivers. Open the throttle on this legendry hyperbike and the world seems to go into overdrive as even the longest of straights very rapidly reduces in length. It is, quite simply, amazing. 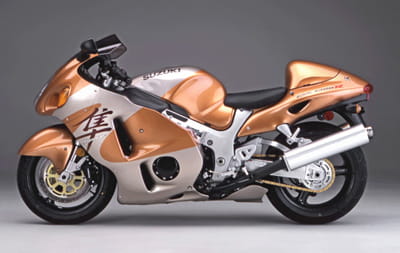 For almost exactly £3,000 you can get your hands on a bike that will do over 190mph (the first bikes weren’t restricted, later ones are limited to 186mph) in less than two miles. How crazy is that? And then there is the look.

The Hayabusa’s bizarre styling is all down to aerodynamics. It is, according to Suzuki, the most aerodynamic shape possible, a feature that allows it to hit such ridiculous speeds with complete stability. But here is the odd part, despite many disliking the Suzuki’s lines, the bike itself has developed a huge cult following. Rap videos, movies, the Hayabusa has done it all and there is a still massive movement in America for pimping Busas. Get on the internet and check out some of the stretched bikes, they aren’t to everyone’s tastes but they are impressive…

Are there any downsides? The Busa isn’t overly comfortable, the handling is a touch soft and the brakes are lacking in bite – which isn’t exactly ideal for a bike that can do nearly three times the national speed limit….

Kawasaki ZZR1200
The ZZR1200 is often overlooked due to its ugly appearance, which makes it a cheap second hand option. The motor is outstanding, comfort excellent and if you like the look then it is a real bargain hyperbike.

2004 Kawasaki Z750
As part of its post-2003 revival, Kawasaki launched the Z750 – an angular and quirky naked bike that broke all the middleweight rules by being 750cc and not 600cc like everyone else. What a masterstroke of design. The original Z750 is a brilliant naked bike that offers so much more than the likes of the FZ6 or Hornet. Its increased capacity gives the Kawasaki a heap of mid-range where the 600s are lacking while the unusual styling is cool without being too out-there. Add to this decent handling thanks to a well developed chassis and what’s not to like? Oh yes, the Z750S.

A year after the Z750 Kawasaki launched the Z750S, a semi-faired version of the bike. With a single rider/pillion seat and ugly half-fairing the S is best avoided due to an incredibly uncomfortable riding position that pushes your weight forward and squashes your man bits against the tank. A horrible bike.

With £3,000 in you hand you can get a really lovely Z750 with around £500 saved to pay for new tyres or insurance, which is excellent. The later updated models are not as good as the original bike, so don’t be tempted to go for a next generation.

2004 Honda Hornet 600
One of the most popular middleweights and therefore both plentiful and cheap in the second hand market. Limited by a buzzy engine and poor fuel range the Hornet is reliable but a bit gutless.

Suzuki GSR600
For some reason the GSR failed to win many fans, making it a very cheap second hand buy. Not a bad bike, the Suzuki isn’t a great looker but is a solid naked at a very respectable price and is worth considering.

Tourers on a budget

1992-1998 Honda ST1100 Pan European
Don’t let the Pan’s age put you off, this is a fantastic mile-muncher that has a formidable reputation as a cross-continental tourer. 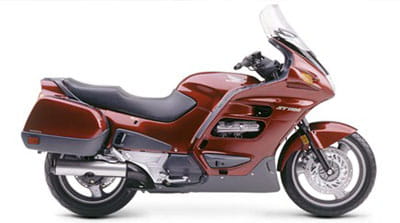 With just £3,000 to spend you are looking at the older style ST1100 rather than the updated ST1300, but this is no bad thing as a lot of Pan fans hate the new bike due to a few issues with its handling. The ST1100 offers tried and tested reliability that simply can’t be beaten.

The Honda’s V4 engine is ram packed full of grunt to lug you and a pillion all over Europe while the chassis is neutral enough to allow you to enjoy the bends without thinking you are riding on a waterbed. What’s not to like? To be honest we can’t think of much.

Used examples are common and so are high mileages. Don’t be afraid of big numbers on the clocks, the Honda is built to last and as long as it has been regularly serviced (most owners are meticulous when it comes to servicing) you should have no issues. Get her loaded up and explore Europe.

Honda VFR800
For the sportier tourer the VFR is hard to beat. Go for a non-VTEC VFR800 (pre-2002 model), the variable valve system wasn’t very good on early versions and the standard 800 motor is much better.

Ducati ST2
Who says touring can’t be fun? The ST2 uses an air-cooled desmo V-twin from the Monster and is surprisingly accomplished when it comes to covering miles. Reliability isn’t as bad as you may think and it certainly turns heads.

Triumph Tiger 955i
Triumph’s Tiger adventure bike was first launched in 1993 as a 900 triple before growing in capacity to 955cc in 2001 using a de-tuned version of the Daytona triple. If possible it is a better idea to get this generation as it has more guts than the 900, used examples are out there so search for a while and you won’t be disappointed. 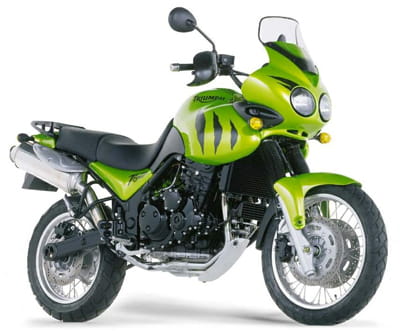 The Tiger is an adventure bike in the old school style. It has wire wheels with a 17-inch rear and 19-inch front, which means it looks like it could go off-road, despite the reality being very different. As with so many adventure bikes a gravel path is all the Tiger can happily handle, but why would you want to go off-road on the Triumph?

The Tiger comes with a very comfortable riding position that sees the miles disappear as you relax into the deeply padded seat. The bars are wide, the tank large and engine an absolute beauty. It may be a bit top heavy at slow speeds but the Tiger is still a great adventure bike. Although it does come in some shocking paint schemes…

Suzuki DL1000 V-Strom
The V-Strom is often over looked in the adventure bike market, which is a real shame as it is an excellent machine. The build quality isn’t great, so they often look tatty, but they are reliable, comfortable and cheap.

Ducati Multistrada
These do pop up for under £3000, so keep your eyes open. The original Multistrada uses an air-cooled desmo V-twin and apart from looking like a Dyson hoover is a brilliant bike. Not an ideal tourer bit still a hoot to ride.

Look for new or used bikes on Bennetts Classifieds