This is second part of our challenge to see what gems we could find with a target price of under £2000 in the small ads...

Armed with only £2000 you shouldn’t expect miracles in the hyperbike market – however that doesn’t mean you can’t get your hands on one of the fastest bikes ever built! 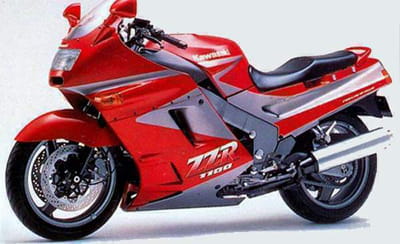 Kawasaki’s legendary ZZ-R1100 was launched in 1990 and very soon cemented its place in history. Easily the fastest production bike you could buy, the ZZ-R would top 180mph on a good day during a time when you could take it to France, open it up, and not get into serious hot water. Well, not that serious anyway.

As you would imagine the outstanding feature of the ZZ-R is its 1052cc water-cooled inline four motor, which in 1990 was incredibly far ahead of its time. Producing a claimed 147bhp with 80ft.lb of torque this lump ruled the world until Honda produced the Blackbird in 1996, knocking the Kawasaki off its spot as fastest production bike. But top speed isn’t everything and even today the sheer grunt and drive that the ZZ-R produces is highly impressive. What a shame the handling isn’t quite as outstanding…

The Kawasaki is a big old lump of a bike with soft suspension and a chassis designed to handle high speeds and not necessarily bends. For destroying motorway miles in extreme comfort the ZZ-R is hard to fault, however introduce some tight corners and the wobbly suspension soon throws in the towel.

For under £2,000 the ZZ-R offers tremendous value for money if you want a bike that blasts away the miles with good reliability and decent fuel economy.

The CBR1000F first appeared in 1987 as a very fast, but pretty ugly, sports tourer. The all-encompassing fairing is quite reminiscent of the original CBR ‘jelly mould’ and there are some shocking paint schemes to be had, but as a fast and solid machine the Honda isn’t a bad shout.

It is not often that a replacement model of bike fails to better the original, however in many ways that’s exactly what happened when Yamaha updated the Fazer in 2003.

The all-new FZ6 range of Fazers were certainly more technologically advanced when compared to the FZS bikes, but by the same token they failed to recapture the magic formula that made the original model so very special. 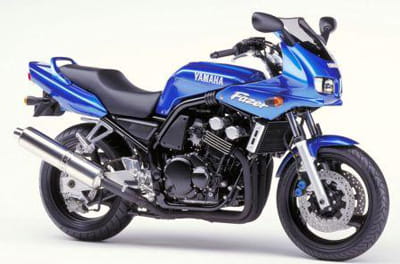 Using a modified Thundercat engine housed in a budget tubular steel frame, the first Fazer arrived in 1998. Sharing several components with other Yamaha models, including the R1’s brakes with funky blue anodized parts, the Fazer was built on a budget but proved extremely versatile. Subsequent updates saw the FZS gain a larger petrol tank and better suspension, however it never lost sight of its role in life – to provide simple, low cost two-wheeled fun to the masses.

Today the original FZS is a brilliant commuter that apart from a slightly irritating habit of rusting through its exhaust headers and shedding a bit of paint here and there is as solid as they come. For carving through traffic the Fazer is light and nimble while out on the motorway the semi-fairing is reasonably effective and the motor remarkably gutsy for a 600.

There are plenty of Hornets out on the second market with a price to suit any budget, however they all suffer from a buzzy engine and limited tank range. Great in town and excellent on back roads but less fun on long journeys.

With a £2000 budget you are looking at an ‘oval frame’ pre-injection SV, which is no bad thing at all. A machine that punches well above its weight, the SV’s V-twin engine is the real star of the show while new riders appreciate its light weight and friendly nature. A brilliant bike.

Tourers on a budget

With only £2000 to spend you may be able to locate a Pan European with starship miles on it within your budget, however it is more likely that you are looking at a smaller capacity tourer. If this is the case then Honda’s excellent VFR800 is by far and away the best bet. 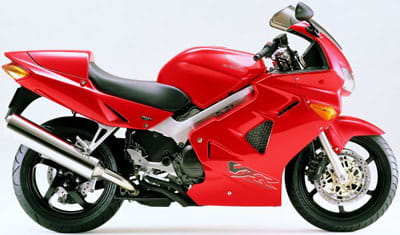 After a bit of searching around you should be able to get a pre-VTEC VFR800 with fairly high mileage rather than the older VFR750 model. This little bit of time and effort will reward you with one of the best versions of the VFR and a bike that many even consider superior to the current VTEC generation.

The 800’s V4 engine is an absolute beauty, packed full of torque and not only extremely smooth to use, virtually indestructible as well. High mileages are not something to be wary of when buying a VFR - check the condition, look at the service history and you will have many fault free miles together to come.

The VFR is the true workhorse of Honda’s range, as happy churning out the commuting miles as it is heading to the south of France either solo or will a pillion on the back. When you get there the sporty chassis shows a surprising turn of pace while the excellent build quality will keep the bike looking good in your holiday snaps for years to come…

A much over-looked sports tourer the Sprint is surprisingly charming to ride. The triple motor is excellent with bags of character, the riding position comfortable and the handling soft yet agile. The look leaves a bit to be desired, however this is a great machine with a value price tag.

Aprilia’s forgotten about sports tourer looks futuristic and has a thumping V-twin engine, however reliability issues put a damper on its sales. A good option for those wanting something a bit different, the Futura is also talking point…when you are in the back of a recovery vehicle…

The F650GS is a solid, if not overly inspiring, performer that gets on with the job in hand and is surprisingly accomplished at both on and off-road riding.

Using a Rotax designed single cylinder engine, the GS is a great starter bike thanks to its bulletproof motor and low seat height. The off-road inspired look also means it can be dropped more times than Fernando Torres, something newer riders all over the world have certainly tested… 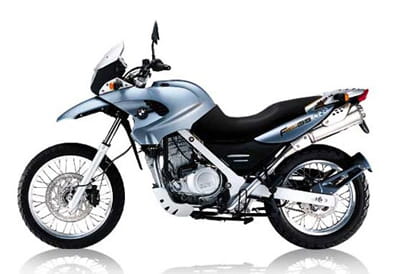 When you add in staggeringly frugal economy and cheap insurance to the comfortable riding position and, of course, the BMW badge on the tank the F650GS is a real winner. For £2000 you can get a 1998 to 2000 area bike with a few scratches or high miles varying the price. Stick on a top box and you have a cracking commuter that will keep on running way after zombies have taken over the world…

The mini-V-Strom is just like its older 1000cc brother – generally over looked! The SV-derived engine is superb and the riding position comfortable for commuting or even serious mile-munching. £2,000 will secure you a tatty one, save up £500 more for a better example.

Like the BMW F650GS the Kawasaki KLE500 is solid, reliable and a good city hack. The handling is wobbly, build quality pretty poor and look very Marmite, however for £2,000 you get a bike that will run and run without ever missing a beat.