Last month’s guide to buying a bike for less than £3000 really struck a chord on Bike Social. Well this time we have made it even harder for ourselves, can we search out some great bargains for less than £2000 in the small ads? Here we go…

Kawasaki were the whipping boys of the litre bike class until the launch of the fearsome 2004 ZX-10R due to the fact they failed to follow the crowd. Where the likes of the R1, Blade and GSX-R went in search of outright power and lightweight handling, Kawasaki instead decided to focus on making a bike that lived in the real world. While at the time this worked against it, in the second hand market that makes the ZX-9R a bike to consider. 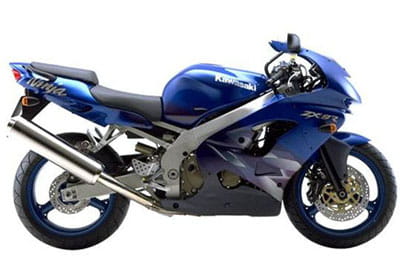 Around £2000 should secure you a second generation model, which means a C1 or C2 version with twin air-scoops that are colour matched to the fairing. Despite being lighter and faster than the original B models, the C was still no match for the YZF-R1 on track and although the engine pumped out around 135bhp the chassis failed to deliver the sporty ride. However does that matter?

In the real world the ZX-9R is a gutsy litre bike with a comfortable riding position and excellent fairing. With carbs rather than fuel-injection there are less things to go wrong (apart from carb icing) and the motor is absolutely bullet-proof anyway, well aside from occasional gearbox issues. Check the cogs engage nicely on a test ride!

Think of the Kawasaki as a comfortable and very fast sports tourer rather than a full-on superbike and you wont be disappointed. If you can spare a few quid, or have searched out a bargain, get the suspension sorted and you will have a bike that for 99% of the time is as good as an early GSX-R1000 or R1 on the road without the associated flighty handling.

1999 Honda CBR900RR FireBlade 918
The last model of Blade before Honda decided to give it back its sporting side is a great all-rounder. A touch fat and heavy for outright handling prowess, the Honda is an excellent machine with a strong heritage and solid build quality.

1996 Yamaha Thunderace
Silly name, surprisingly good bike. The Yamaha is a bike from an age where outright power took precedence over handling and is long and heavy yet solid to ride. They are cheap to buy and well built, but ultimately feel a few generations behind the likes of the Blade or Kawasaki.

The original R6 was the head-banger of the 600 class, exploding onto the scene in 1999 and instantly gaining a cult following due to its hooligan nature. It looked like a mini-R1 and behaved like a racer with lights. A dynasty was born. 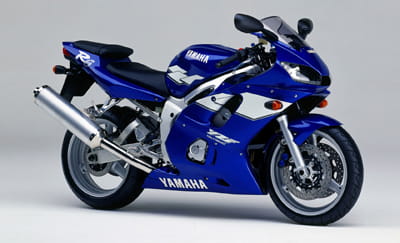 You may not know this, but the R6 was the first four-stroke production bike to hit 200bhp per litre thanks to a clamed 120bhp and 169kg weight. The reality was considerably less ponies and more pork, however with a dizzying 15,550rpm redline and technology shared with the groundbreaking 1998 YZF-R1 (got to love the funky brake calipers) the R6 was still mightily impressive in 1999.

Fast forward 14 years and you can get a 1999 carbed R6 for under £2000, which is great value for such an iconic machine. Despite at the time being seen as a hooligan, age has mellowed the R6 and other than a slightly poor bottom end the Yamaha is a superb fun 600 to ride.

The R6’s seat height is fairly low for newer riders, the engine reliable and the quality of finish pretty decent, which all adds up to a solid performer for those looking for their first 600. However while you can ride the R6 gently, it is far happier being thrashed and get it on an open road and the Yamaha comes alive. Feed it gears, keep the motor singing and revel in the excellent chassis and razor sharp handling. The R6 was impressive in its day and a well looked after one is still a brilliant machine with a bargain price tag.

1999 CBR600F-X
The second hand world is flooded with CBR600Fs and the key is to get the latest generation you can afford as they just got better and better with time. A sum of £2000 should see you riding home on a 1999 X model, which is the first aluminium frame version. A brilliant CBR, it is virtually the same as the updated 2001 model but with carbs rather than fuel-injection.

2001 Triumph TT600
The TT600 was Triumph’s first foray into the supersport class and in all honesty it didn’t go well. Plagued by poor fuel-injection and hampered by an ugly look the TT was a flop, a huge shame as the chassis is excellent. The TT has is faults, but it is a great handling 600 that is different to the Japanese competition and a real talking point. Get it well set-up and the fuel-injection isn’t that bad…

The Bandit has a huge cult following and sold in enormous numbers throughout the 1990s and early 2000s, making locating a second hand example for under £2,000 relatively simple. However you do face one choice – naked or semi-faired. 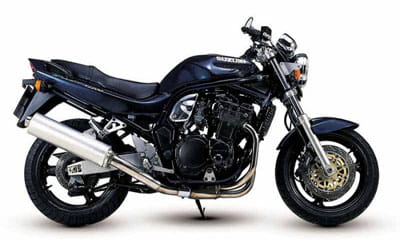 The Bandit was always offered in two guises, the naked version with its single front headlight or the semi-faired S. If you want practicality the S is the way forward, but you simply can’t beat the aggressive stance of the naked bike. So should you buy one?

The Bandit was always a bike sold on its budget price tag rather than the quality of its components and as such an old bike can look pretty tatty. The paint finish is poor, suspension soft and squishy and often items such as the exhaust down-pipes are rusty and the fasteners will have more fur than the Yeti’s belly button – however look beyond the aesthetics (good examples are out there) and you will discover a cracking machine with a monster heart.

The 1157cc air/oil-cooled engine is what the Bandit is all about, driving with a totally fluid nature from right down in the rev range. It may be a heavy old beast, but you just can’t help but fall in love with the power delivery from that motor.

Spend a few quid on the suspension and you can make a Bandit 1200’s handling almost match the performance of that engine, however in reality you are chasing your tail as the chassis isn’t the strongest in the world either. But who cares? The Bandit has a huge customization culture as well as several owner’s clubs so treat it as a blank canvas on which to express yourself and you won’t be disappointed.

1998 Suzuki TL1000S
The original ‘widow maker’ and a bike with a reputation for meanness, Suzuki’s TL is pretty misunderstood. The V-twin engine is punchy and the controversial rotary rear damper is pretty crap, however the TL is a brilliant bike that looks good, goes well and has real character. Sorting the suspension is simple and then you can enjoy the thumping drive of a twin while all your mates think you are a real man because you ride a TL…

2001 Kawasaki ZRX1200S
While everyone knows the iconic ‘Eddie rep’ ZRX1200R, few remember the existence of the ZRX1200S. A semi-faired version of the ZRX, the S was blighted by an ugly ‘modern style’ nose fairing that met with universal disapproval. Where the R is now sought-after, the S is the bargain of the naked bike world due to its unpopularity.