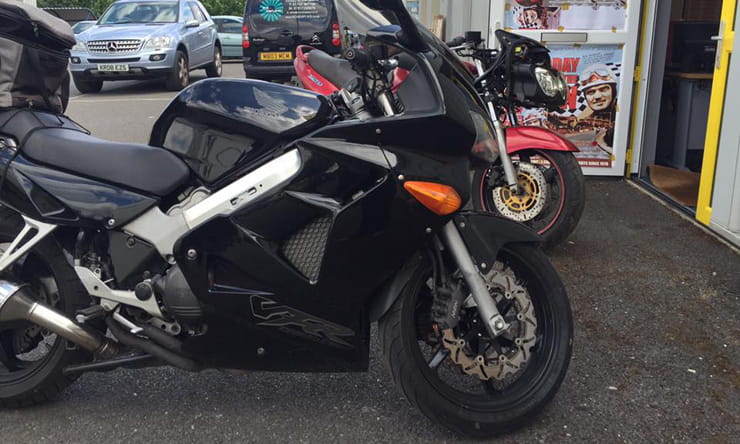 Having waved a fond farewell to last year’s Grand Design Kawasaki ZZ-R600E (I had recouped my initial outlay and made an extra £50 along the way!) I wasted no time looking for a replacement. This year I want to explore the world of the used bikes that live in the sub two-thousand-pound price bracket. So let Two Grand Designs begin!

Deep down I know what I want; it’s one of three models with the Honda wing on the tank. For over a month I’ve trawled the internet, kept an eye on part exchange offerings at my local shop and joined several selling pages on Facebook. Those three models were a CBR1100XX Blackbird, CBR1000F and a VFR. I’ve owned all three in the past, and I have happy memories of the Honda trio. Realistically the Blackbird wasn’t going to be the right bike for my needs. The ones that popped up for sale in my sub £2,000 were pretty tired and stunk of being a money pit, don’t forget this will be a bike that I’d ride every day.

The CBR1000F works in the opposite way, £2,000 is more than enough to get you a stunner. The ones I saw for sale were all too far away, I don’t have the time or inclination to travel around the country to find a used motorcycle. There was a clean one that wasn’t too far away, but it featured an extra that I avoid at all costs, an alarm. I hate the things, sure I could get it removed and that thought did cross my mind, but then I saw it! There was a guy in Kings Lynn selling not one VFR but two! 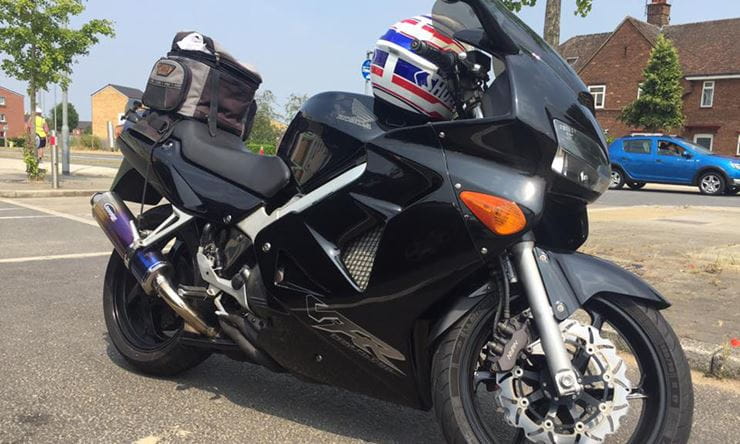 His little advert on eBay got my full attention. He had a late model VFR750FV and a 1998 VFR800. They both looked good in the pics but we all know how a digital photo can flatter the subject. After a few messages, I worked out it was the 800 that ticked more of my virtual tyre kicking boxes. Public transport isn’t something I rush to embrace, so getting myself to Kings Lynn was my next issue, trying to pin down a suitable time that suited us both was also draining my interest. Buying a used bike should be fun, this was all getting a bit painful. Then a breakthrough, the seller was confident that I wouldn’t be disappointed with the VFR800 and he offered to chuck it in his van and bring it over to me, game on!

He wasn’t wrong, for a 19 year old bike it was pretty tidy, sure the bits he’d tarted up stuck out a mile but it displayed some affection, that’s never a bad thing when buying a used bike. I could smell the polish it was that clean as it rolled down the ramp and into my life. I circled it one way and then the other. It looked pretty honest.

We cracked a deal, always tricky when a bloke as just driven 40 miles to do you a favour. We’d haggled a £100 off his £1,850 asking price during our phone call. After he’d pointed out the new chain and sprockets, pads and talked me through how he’d recently serviced it I just shook his hand without further negotiations. Yes, I couldn’t believe that either, but after spending over a month searching for a bike I was happy to reach a conclusion. Filling in the logbook revealed that my new bike also came with a full service history and every old MOT! I love stuff like that. There was even a spare key.

I never bothered with a test ride. Why would I, it’s a Honda.

Having now got a bike within my £2,000 limit I now have £250 change to get it just how I want it. I need a rack and top box, and I’m not overly struck on the race can that’s fitted. The search for a bike might have ended, but my story is only just beginning.