What Headlight bulb do I need for my motorcycle? 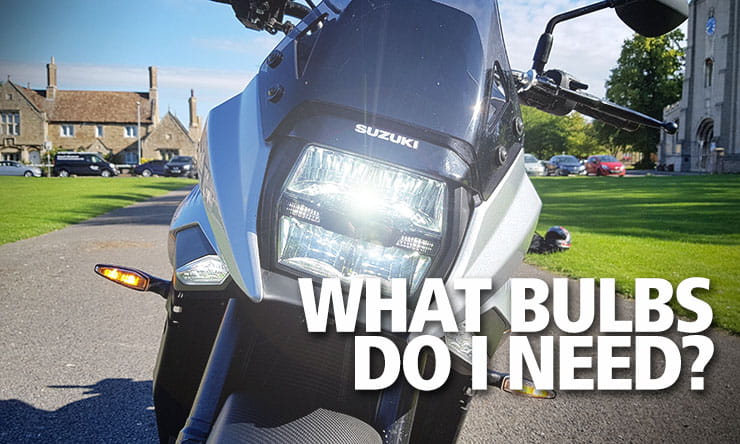 Lots of motorcycle headlights are, frankly, rubbish. And the older your bike, the more feeble the headlights will be. Many of us just accept that when it gets dark we have to crawl along, straining to see a fraction of the distance ahead that we normally scan, but it needn’t be so. Modern replacement bulbs can make a massive difference for a relatively small outlay. So whether a bulb has just blown, or you’re fed up of trying to ride by candlelight, here’s the process for improving matters:

What headlight bulb do I need?

Find what headlight bulb fitment you need. For a 600cc-plus bike made in the last 20 years or so, it will probably be H1 (slimline bulb), H4 (fatter bulb containing dual filaments for high and low beam) or H7 (fatter bulb, but containing a single filament), but the only sure-fire way to know is check the manual, get the old ones out and look at the inscription, or put your bike’s registration into a retailer website (eg halfords.com/motorcycling/bulbs). Don’t forget Bennetts Rewards members can save 10% at Halfords nationwide.

If your bike is pre-1980s, it may even have 6V bulbs (all modern ones are 12V). You’ll know if it’s 6V because at night it’s like trying to ride using a child’s torch. Sourcing a 6V replacement bulb shouldn’t be a problem (wemoto.com have a selection), but you won’t get much more light than standard – unless the original bulb has blown of course, in which case a functional replacement will be a marginal improvement. 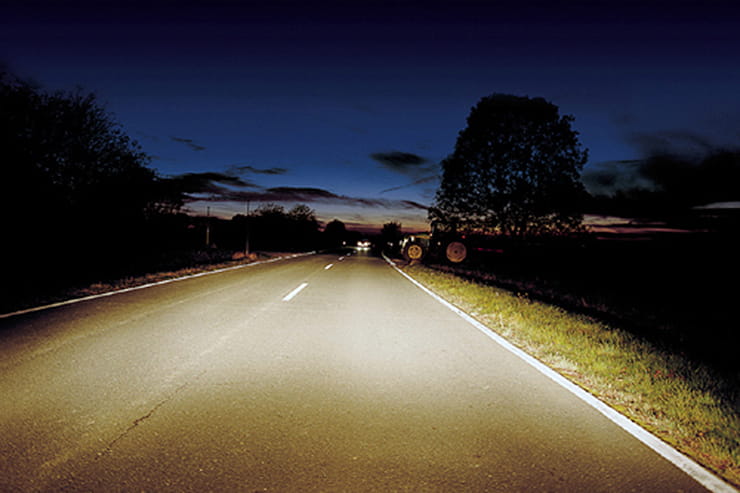 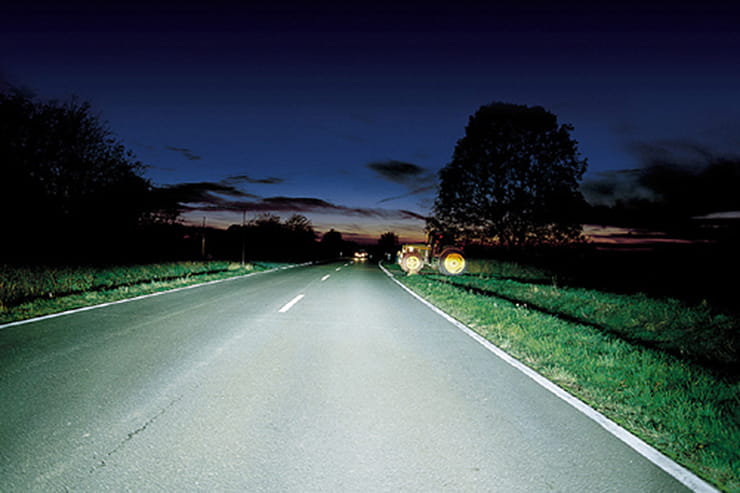 At the top is a typical halogen headlight, below is a well set-up LED. Note the LED’s much whiter light and its increased spread, making it easier to pick out details in the verges.

What do all the bulb markings mean?

Some bulb manufacturers spout industrial levels of horsesh!t about bulbs, so it’s handy to know the basics. There are three units you need to worry about. Watts (W) is the power that can be pumped into the bulb by your bike – not the light that comes out of it, so an efficient bulb can produce far more light than a poor one for exactly the same W rating. Some people put higher W bulbs in their bike than the rating (eg using a 100W bulb instead of a 60W), but we don’t recommend it – there’s a risk it could melt the wiring and start a fire. The second unit you need to know about is Kelvin (K), which is the colour of the light (again, not the quantity). On this scale, a candle is around 1900K (ie warm orange), a halogen bulb is around 3000K (ie fairly white but still with an orange glow) and direct sunlight is 4800K. LED and HID bulbs can be above that because they have a blue tinge. Finally, we get to Lumens (L), which is how much light the bulb actually produces. Clearly, this is critical, though bulb manufacturers often keep quiet about it because it’s easier to make bulbs that are bluer (higher K), than making them brighter (higher L).

What kinds of headlight bulb are there?

If you have a common fitment (H1, H4, H7 etc), you will have three replacement options – halogen, HID (also called Xenon) and LED. Each of these makes light in a different way and has pros and cons.

What are Halogen bulbs?

These work like an old light bulb – filament gets hot and glows inside a glass bubble full of gas. Almost every bike came with these as standard, though the latest models are getting LEDs. By tweaking the filament and gas, manufacturers have improved the light output (Lumens) dramatically, several claiming over twice the output of a standard bulb.

Cons: similar lifespan to normal bulb, not as bright as LED or HID 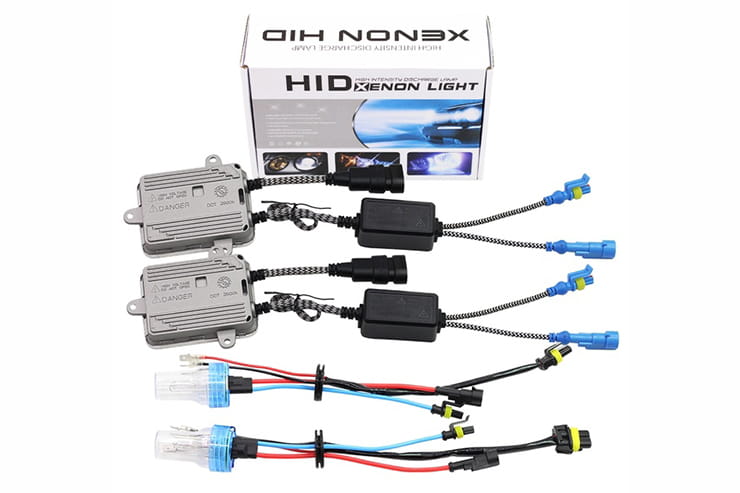 High Intensity Discharge (HID) bulbs are as bright as LEDs but need a lot more room because of the boxes (this is a two headlight set-up) needed to boost the voltage.

What are HID (High Intensity Discharge, or Xenon) bulbs?

These work by using a huge electrical wallop to force an arc to jump between two electrodes. HIDs were made infamous back in the day by high-end BMW and Merc cars that could dazzle you from another country. Extremely bright, some putting out five times as much light as a standard halogen. Serious disadvantages for bikes though.

Cons: expensive (£40+), a pain to fit because you have to find space for the box needed to crank up the arc, delay when turning on, produce lens-melting amounts of heat, difficult to aim beam so you don’t blind other traffic when you accelerate (you risk an MOT fail because of this).

Can I swap out halogen bulbs for HIDs/Xenons?

No. Under changes made to the MoT, from May 2018, any vehicle fitted with aftermarket HID conversions is considered an immediate fail. 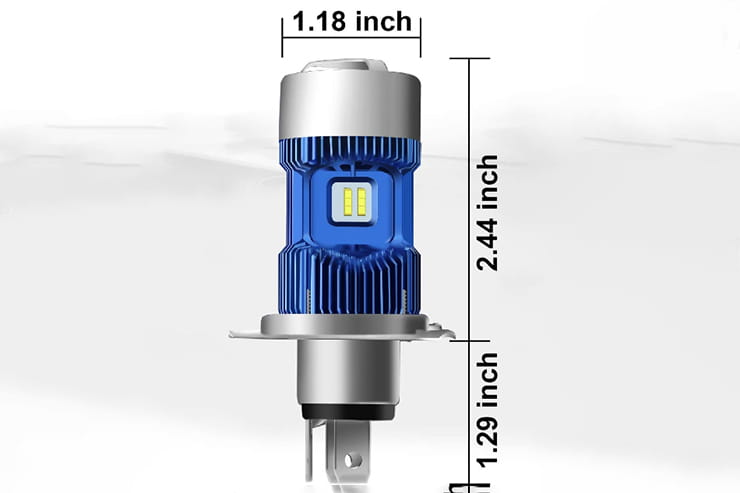 Replacement LED bulbs are available for bikes (this is an H7). Note the size though – some bikes haven’t got enough room behind the light housing.

What are LED bulbs?

These work by pushing electricity through a Light Emitting Diode (LED, see). These are the future. Initially LED bulbs needed separate fans to cool them but now you can get replacements with the fans, or heat sinks, built in. Consequently, they’re longer than standard bulbs.

Cons: more expensive (£20+), can be difficult to fit depending how much space you have behind the headlight unit (check on full lock), compatibility issues with CANbus bikes (eg modern BMWs), difficult to set up to avoid dazzling oncoming vehicles (you risk an MOT fail because of this) and the spread of light might not work with your bike’s reflectors. 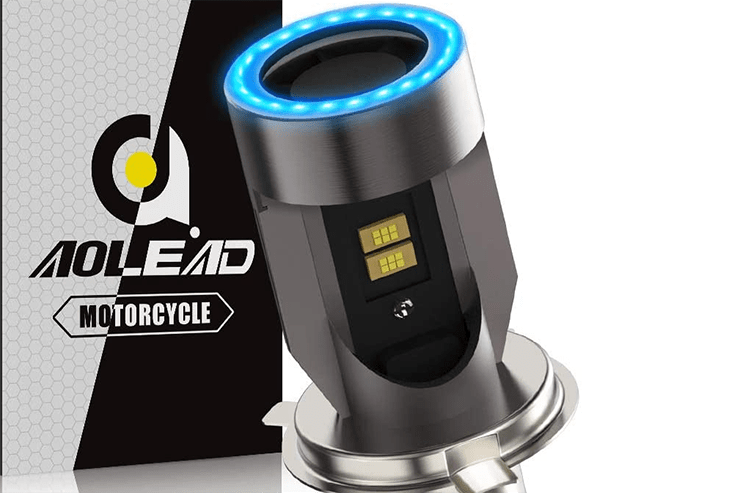 This LED is available for £20 on Amazon. The reviews are OK but several buyers complain that the spread of light does not match their headlight reflectors, rendering it worse than a decent halogen bulb.

How do I replace my headlight bulb?

This should be relatively straightforward because manufacturers know that bulb replacement will be a common job – and a critical one if a bulb blows at night. Generally, all you have to do is pull off the rubber boot behind the headlight that stops rain getting into the housing, then pull off a sprung wire clip. You can then pull out the bulb, replace it with your new one and, hopefully, actually enjoy riding at night.

Bennetts Rewards members save 10% at Halfords, and that includes light bulbs. For hundreds of incredible offers, discounts and competitions, visit Bennetts rewards ⤵ 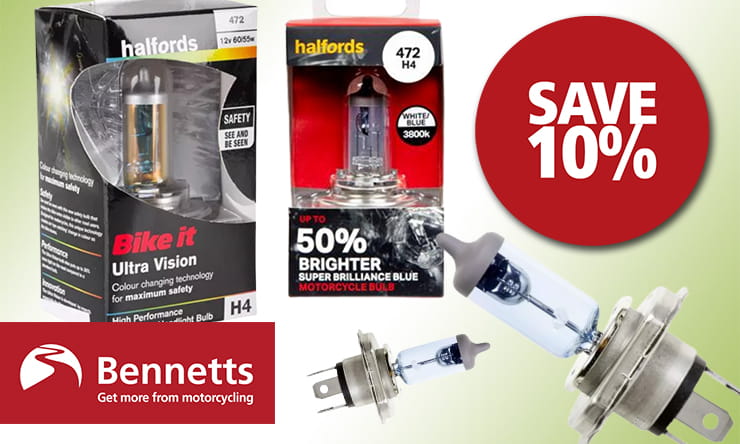