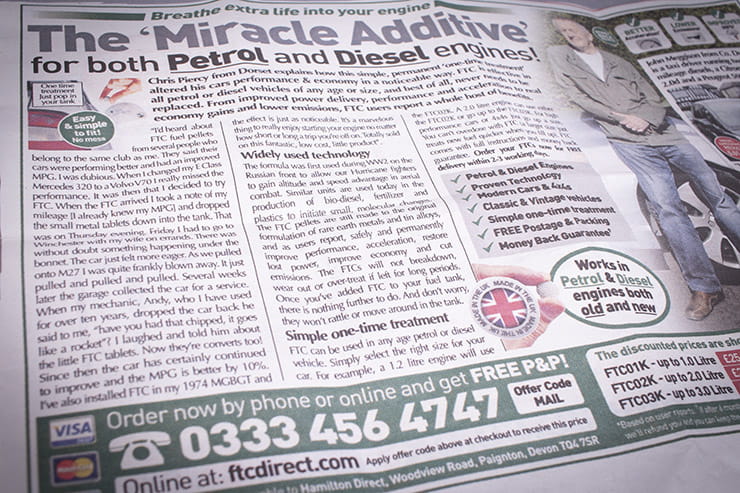 Widely advertised in tabloid newspapers like the Daily Mail and Daily Express, there’s long been a stream of ‘miracle’ fuel additives and gadgets that claim to boost the performance and economy of your car or motorcycle’s engine, but do they really work? Can they truly give the results that they claim?

Some of the products currently available claim to use the same formula as that said to have been used to allow Hurricane fighters to gain altitude and speed in aerial combat during World War II. Some earlier patents for fuel catalysts included mercury – while this is no indication that they worked, it’s not the formulation used in some of the products today. Tank Chip, from Hamilton Direct for instance, is mainly made of tin, along with 20% antimony and 5% lead; similar to pewter (we know, because we had a lab run a full compositional analysis for us). There are other metals, such as gold, though only 0.00161% – that’s 0.0004991g in the 31g Tank Chip R that we put in our KTM 1290 Super Adventure during a dyno test with a motorcycle race engineer. You can read the full review here.

While we haven’t been able to track down one of the original catalysts that are so often quoted in these adverts, one scientist we spoke to (who tested similar products several years ago) did point out that propaganda during WWII included claims that our fighter pilots could see in the dark thanks to carrots.

According to Dr Chongming Wang, lecturer in Internal Combustion Engines, Institute for Future Transport and Cities at Coventry University, the lead in an additive could – in theory - have a beneficial effect; “The lead [in fuels of the past] basically boosted the fuel’s octane rating, which would allow [the lower octane fuels to] work in high-compression engines.”

The Tank Chip we tested doesn’t claim to work because of lead dissolving. Instead, it’s described as a ‘heterogeneous catalyst’, which adsorbs molecules on its surface. Heterogeneous means it’s a different form to the reactant (it’s a solid, and petrol is a liquid), and adsorption sees any reaction taking place on the surface. This is unlike absorption, which is where a fluid soaks into the item. Tank Chip claims its product will not dissolve, erode, break down or wear out, and won’t ever need replacing, so it can’t be intended to be slowly dissolving into the fuel to boost the octane rating.

Dr Chongming Wang told us that “Gasoline has quite low conductivity, so any chemical reaction rate is low.” If a catalytic reaction were to take place, it would likely take longer than the fuel would be in your car or motorcycle’s tank, before it was burned in the cylinders.

Keep in mind that modern engines are designed to work with today’s fuel formulations. Catalytic converters are delicate and expensive items, so you should take care with any fuel additives.

Do fuel additives make a difference?

During our test of the Tank Chip ‘fuel catalyst’, we saw no increase in performance during dyno testing on a 2018 KTM 1290 Super Adventure (fuel injected) that had covered 2,500 miles before testing, or a 2002 Yamaha Fazer 1000 (carburettors) with 37,000 miles on the clock. We also measured economy in the controlled environment, but actually found it was worse.

To think that the ‘miracle additive’ had caused this drop in economy would be to assume that it had an effect on the fuel in some way, something that we didn’t believe was likely. For this reason, rather than say that the product not only made no difference to the performance, it also made the economy worse, we recorded our economy test as inconclusive.

After presenting our results to Hamilton Direct, we were told that “It is therefore clear that technical issues with the bikes and testing process on the dyno produced inconclusive results on economy. What really matters is that riders who use tank.chip on the road regularly report a significant increase in economy and also improvements in performance. We hope that the BikeSocial Test Team enjoy more consistent and reliable results in their ‘real world’ trials.”

We bought the two Tank Chips for our testing, but the company then sent us three more, to give to members of the BikeSocial Test Team for economy testing. This was started early in October 2018, and as of the end of January 2019, none of the testers have seen any increase in economy, though one believes that the throttle response of his 2007 Honda CB900F Hornet was improved with the Tank Chip, contrary to our lab testing.
Another tester – an all-year-round commuter covering 100 miles a day – told us that “The Tank Chip has proved a spectacular failure. With the same route ridden to and from work, at the same time, Monday to Friday, I burned through four refuels prior to adding the Tank Chip to my Suzuki Burgman 650, which gave an average of 53.97mpg. After adding the product on the 18th of October 2018, I refuelled 40 times. The average with the tank chip installed was 53.15mpg. So no difference at all really, and no change in the power delivery or throttle response.

“I pulled it out and put it into my other bike – a Kawasaki Versys 650 – while I was overhauling the Burgman’s brakes and had similar results; three refuels without the chip gave an average of 49.71mpg, while a subsequent nine refuels with it in gave 50.42mpg. So again, the same route, with no real difference in economy or power. I covered a total of about 7,000 miles between the Burgman and the Versys. I’d say that’s pretty conclusive as a real world test goes.”

We’re not the first people to review devices that claim to improve performance – Fifth Gear ran a car on a dyno with several different products fitted, including the Broquet fuel catalyst, which claims to be based on an original device designed by Henry Broquet for WWII Hurricanes:

The concept of a fuel additive covers many items, and there are some that can be advantageous to use, while others might have a form of placebo effect for users. Miracles are hard to come by, and many people question why – if a simple, relatively cheap product that can be dropped into your tank or bolted into your fuel line really works – aren’t manufacturers using it when building vehicles?

Ultimately, our work has shown that the fuel catalyst we tested didn’t improve performance on the dyno, or economy on the road, but we’d love to hear of your experiences; have you had success or failure with such devices and products? We welcome your comments below…