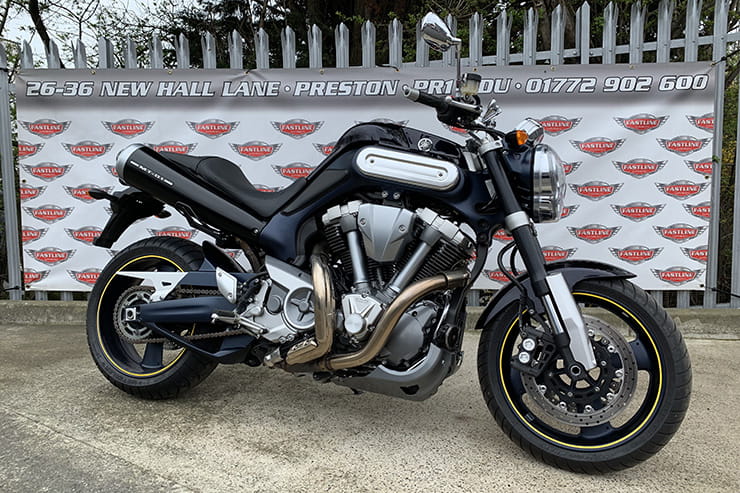 Yamaha’s MT-01 was (is) actually a very good motorcycle. Many years ahead of its hipster time and yet another great example of Yamaha’s culture of innovation producing interesting and accomplished machines.

Sadly, it will go down in history as suffering the absolute number-one worst marketing campaign in biking…ever. The press pack was lengthy, but the essential message was…

‘Hey motorcycling, we made a sports bike…out of a cruiser…’ Cue tumbleweed, confusion and the special designated MT-01 area in the carefully selected Yamaha dealers chosen to sell it being about as popular as a wasp in a bidet. And while both the wasp and the MT-01 would cause a throbbing between your legs, only one of them would cost you more than a proper sports bike making twice as much horsepower with two thirds of the mass.

If Yamaha had launched the MT-01 first as a cartoon version of a super-sized Ducati Monster they’d have sold many more, because the MT was a great bike to ride and came just about at the right time as sports bikes were starting to lose their crown. And, if they’d then launched a cruiser with the marketing message ‘Hey motorcycling, we built a cruiser from our funky, retro sports bike,’ they’d have sold a boatload of XV1700 Warriors too. 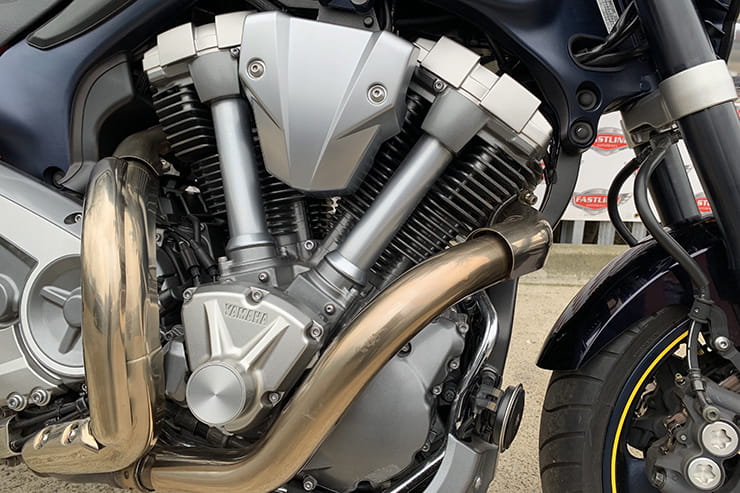 Sadly, no one in the history of motorcycling, ever has asked for their top of the range (the MT cost £9500 in 2005 – considerably more than the commonly-discounted price on a YZF-R1) sports bike to be built out of a cruiser and most MT-01s spent the summer of 2005 (and 2006 and 2007) gathering cobwebs in Yamaha showrooms. Which was an ironic shame because as a Sunday afternoon blower-away-of-cobwebs it made a lot of sense. 80bhp at the back wheel sounds puny in a bike weighing as much as many tourers, but it happened at just 4750rpm allowing the MT to feel a lot faster than it was. Peak torque (a tarmac-twisting 110lb-ft) occurred 1000rpm earlier which meant you only had to sneeze and you’d have overtaken pretty much anything doing a similar speed. 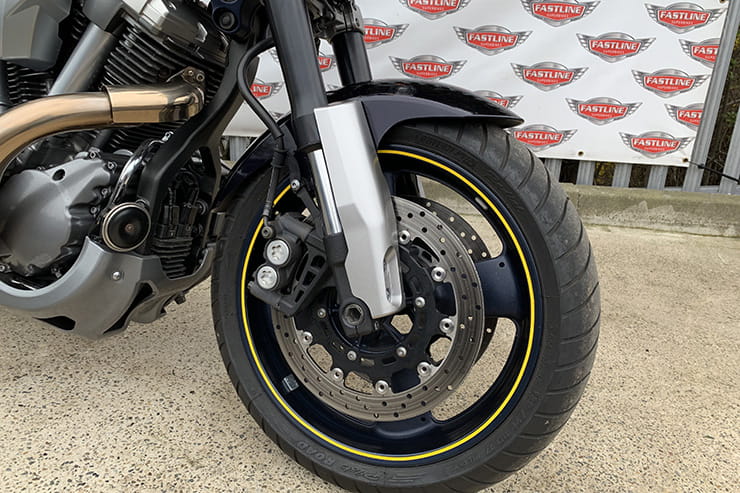 Forks and swing-arm were from a 2004 YZF-R1. Lots of adjustment…thankfully

Everything worked in a very small window of fun though and every MT rider’s first impressions had a lot more to do with the chassis than the engine. The wheelbase was five feet long, it weighed 70kg more than an R1 and had suspension set soft for comfort. Shutting the throttle produced enough engine braking to half compress the soft forks, knocking inches off the wheelbase. Stamping down the ‘strong-and-you’ll-bloody-well-feel-it’ gearbox was un-necessary, but you still did it anyway , which asked enough of the drive chain and rear suspension to get the back wheel skipping. And, as you released the front brakes the forks’ minimal rebound damping sent the handlebars bouncing skywards, turning your sports bike back into a five-foot chopper that wanted to run wide.

Thankfully there was plenty of suspension adjustment available and it was possible to make an MT-01 steer predictably while the suspension just about kept control. Increasing the rear preload and backing off the front helped the bike sit a bit more nose-heavy and made a significant difference. Once set-up properly a carefully ridden MT-01 could be a lot of fun on a fast A-road and even better through town where the instant overtaking, wide bars and immense presence made it even more attention-grabbing than a Harley.

Huge speedo was a nod to the fire breathing Vincent twins

Onlookers couldn’t ignore the twin cartoon exhaust pipes. Old fellas could see the Vincent influence in the enormous speedo sat almost upright on the top yoke and the presence of industrial-sized everything was a guaranteed conversation starter. Funnily enough, given the recent fascination with retro you can’t help but feel that if Yamaha had built a Vincent-a-like from their XV1700, they would have shifted a lot more units.

By the end of 2005 cracks in Yamaha’s no-discount policy were starting to show. Dealers sold their demonstrators cheap and then immediately registered another demo bike and sold that one cheap shortly afterwards too. Before long you could pick up a new MT-01 for around £7k (bear in mind that back then a typical price for a discounted R1 was around £7999) and by mid-2006 a low mileage ex-demo bike was costing £6500. 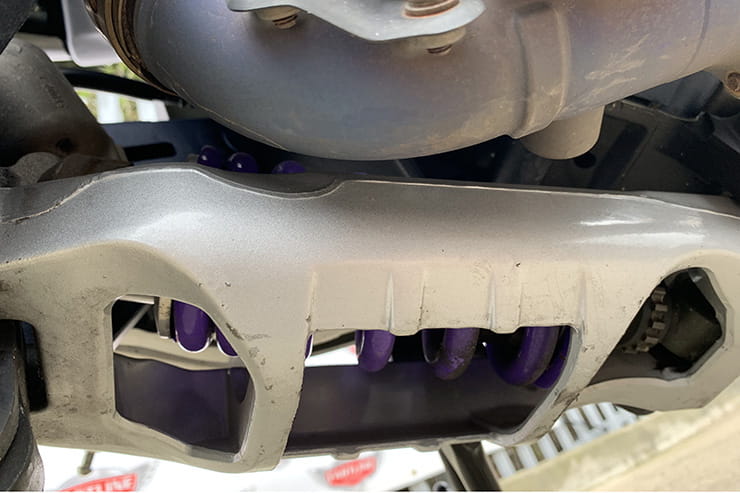 Rear shock absorber is under the engine to allow exhaust routing. When it gets hot, the MT’s handling gets even more, er, ‘retro’

No one (least of all the dealers) cried when the MT-01 disappeared. The first MT-03 that followed it (‘Hey motorcycling we built a sports bike out of an ancient single-cylinder trail bike’) somehow managed to prove even less popular. But at least it allowed dealers to re-use and recycle the tumbleweed blown in by the MT-01. And none of them cared back then because they were selling so many R1s, R6s and Fazers that Yamaha could have put a rebadged Austin Allegro in the range and they’d have found a quiet corner of the showroom to forget about it in.

Thankfully, Yamaha persevered with the MT concept and when they finally got it right with the current range of bikes, they really got it right. Will the MT-01 ever be a classic? Maybe not as much as the V-Max, but when the history of hipster motorcycles comes to be written, there’s a good chance the MT will pop up as an important-if-unsuccessful moment – a bit like BMW’s funky K1 in the story of sports bikes. That scarcity means prices will rise. Right now, you’ll pay between £5-8k for one and it’s unlikely they’ll ever be any cheaper. As a left-field choice that offers something truly different that you can enjoy riding, it’s up there with an early BMW R1100GS (which would already have become a cast-iron future classic if there were any good ones left) and Harley’s V-Rod.

Don’t say we didn’t warn you. 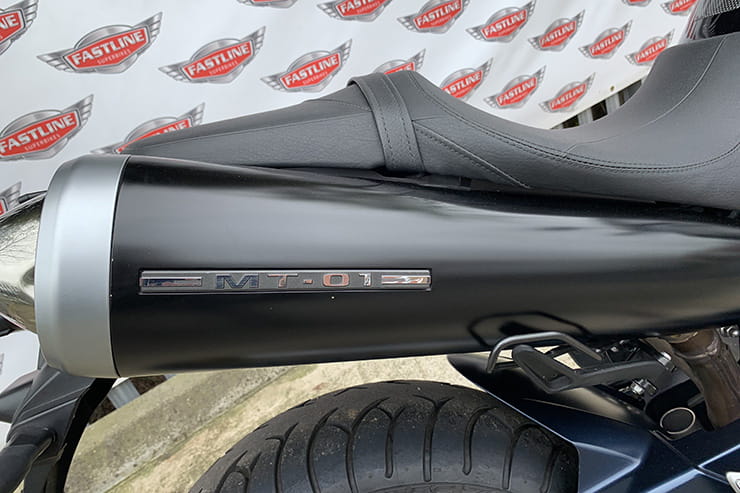