So you want to run a classic bike shop? 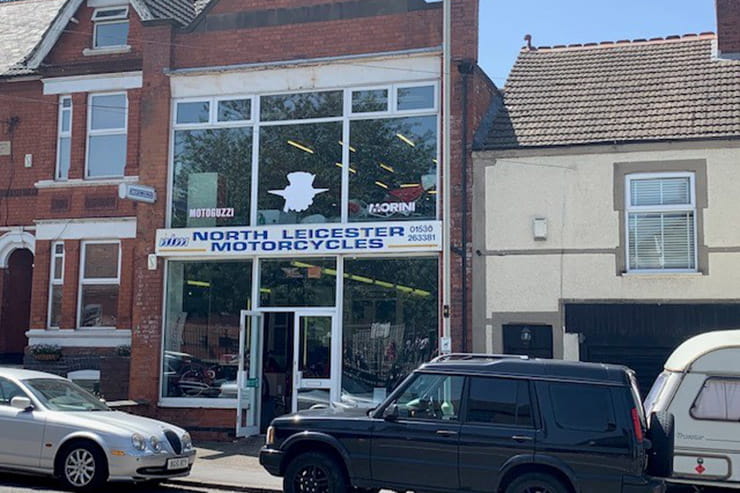 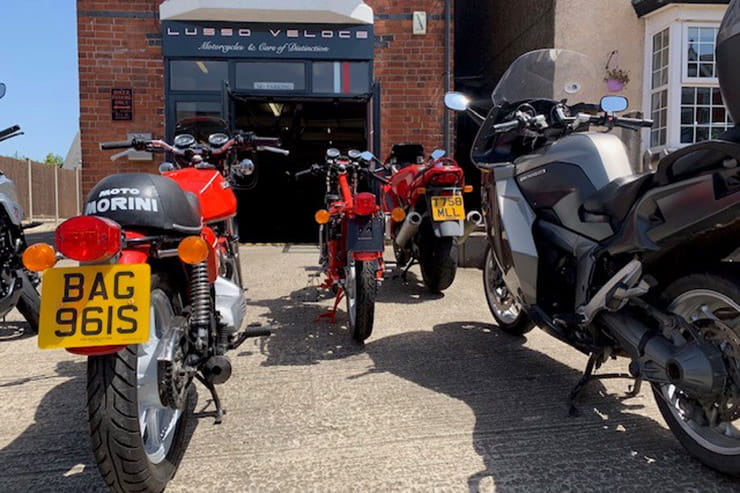 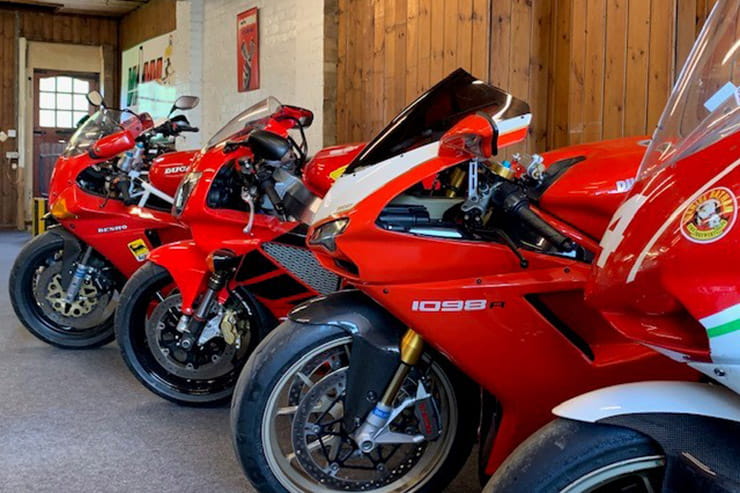 Provenance and trust. If you’re running a business at the classic end of the motorcycle market, nothing matters more. And two words that are in my head as I pull up outside Lusso Veloce on the outskirts of Leicester. I’ve been here before, many years ago when the business was called North Leicester Motorcycles (NLM). In many ways this is the same business. Chris, the gaffer is the son of Stuart and has been part of the business on and off for much of the 47 years it has been going.

NLM built a trusted reputation as specialists in Italian motorcycles and even held the UK Bimota franchise for a while, but they are best known for their expertise in Morini, Ducati and Moto Guzzi.

The evolution into Lusso Veloce began when they decided to focus on bike sales and repairs. ‘We’d become the go-to supplier for Morini spares and had enormous stock. But running a spares business is very time consuming and, with Dad wanting to retire we decided to sell the parts to another dealer (Mdina Italia) and concentrate on bike sales,’ says Chris.

‘Also, we’d noticed a convergence between some of our classic bike and car customers - people wanting to part-ex the odd classic car for a bike. So changing the name from NLM to a more generic Lusso Veloce, allows us to expand into four wheels if we choose to.’

Chris cites the example of one wealthy customer who bought a couple of bikes recently. ‘He’d also bought a new Porsche and had an old one taking up space. This chap would rather avoid the hassle of selling it privately and so asked if we’d be interested in the Porsche as part of the deal on the bikes. That suited us and allows us to dip a toe in the water of the car market too.’ 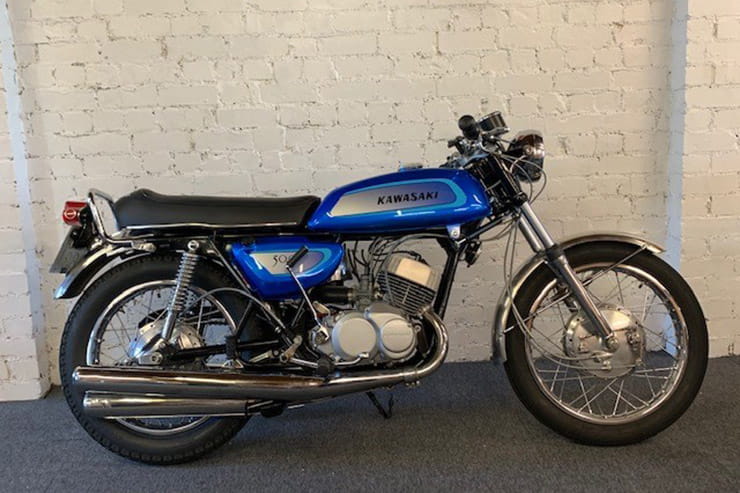 The real deal. Proper Japanese classics are increasing in value

So. How do you become a trusted classic bike trader?

Chris’s answer is simple and obvious. ‘You work hard over a long period of time with both customers and suppliers in order that you can acquire the interesting and most desirable stock and have a customer base of people who know you’ll deliver what they expect.’

Sounds simple, but, while the showroom stock is around 50 per cent bikes that are relatively easy-to-find, there’s a lot of stuff here that you don’t come across every day. Like a genuine Fritz-Egli built Egli Vincent. Provenance is everything at the top end of the classic market and it’s all too easy to buy something that sounds like the real deal but turns out to be not quite right. Even more so in the classic race bike market. And that’s where the time spent being ‘the good guys’ pays dividends. When you do the right thing by people in the classic trade they come to trust you and when they trust you it’s only a matter of time before you come into contact with one of the elite band of collectors who have the really interesting stuff; the genuine ex-works race bikes, or the factory prototypes that no one else has.

But there are other ways too as Chris explains. 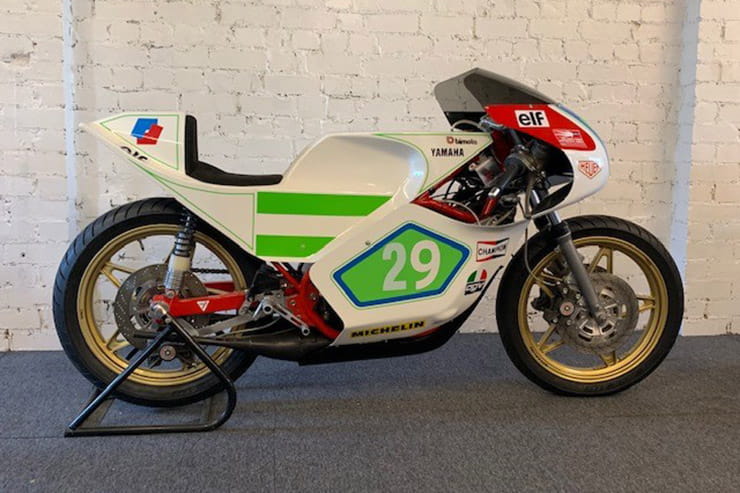 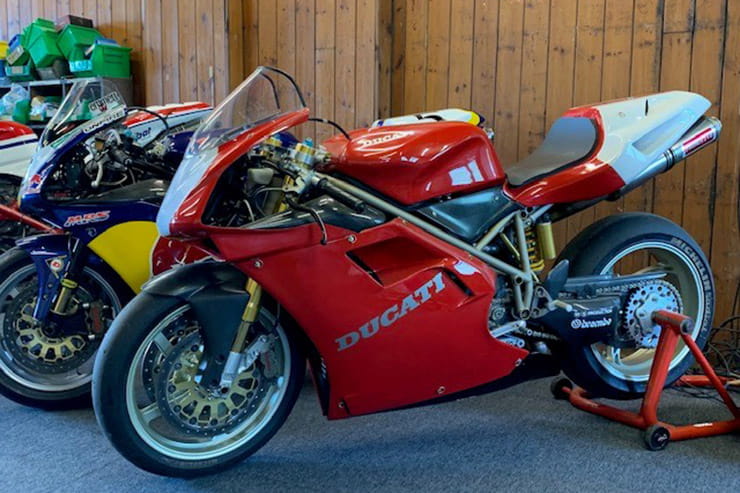 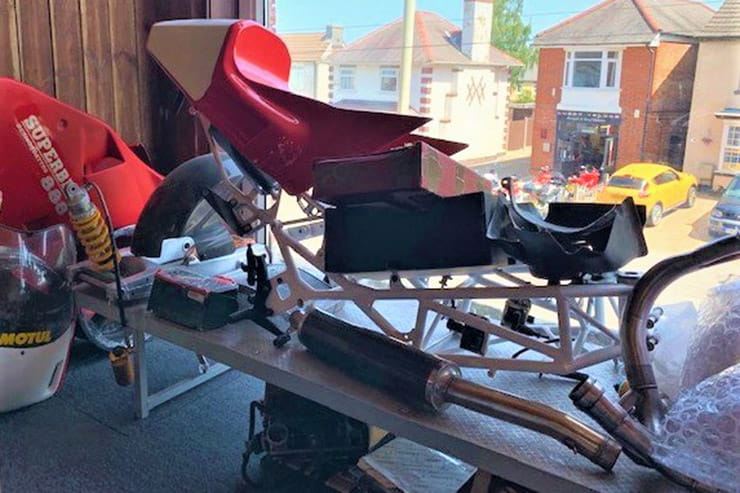 How to buy a classic race bike

‘Race bikes often have several lives. Last year's works bike gets sold to a mid-pack privateer team. The following season it ends up with a smaller private owner. No longer competitive at the highest level, its value drops as a race bike, but the smart buyer will understand its place in history and snap it up. We have one of Carl Fogarty’s Ducati 888s that he rode as a privateer in the 1992 season. It’s an historic bike, but after Carl had moved on to the works Ducati team, this bike, owned by Steve Wynne of Sports Motorcycles, was raced by several other small teams who just needed the most competitive bike they could afford. By the late 1990s it was no longer competitive – just another old race bike. Eventually it was bought by NLM and, one day will be rebuilt and ready to parade or maybe race in a classic series.

The 888 is one of a small collection of very trick classic Ducati race bikes at Lusso Veloce, including a 955 Corsa and full Factory WSB ex-Carlos Checa 1198R. 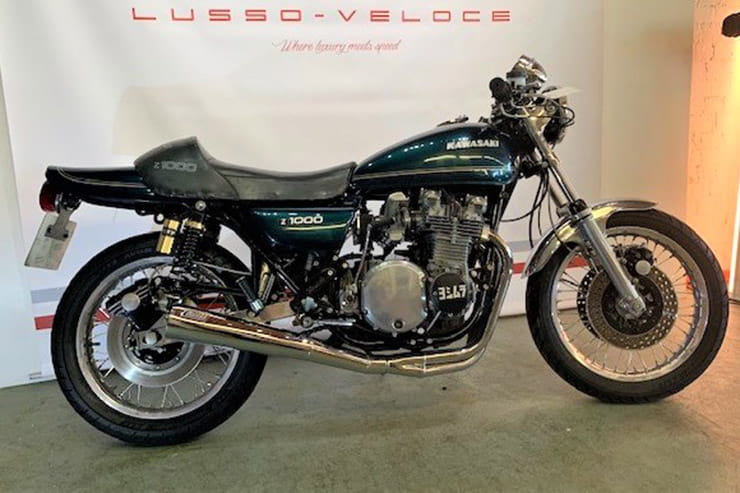 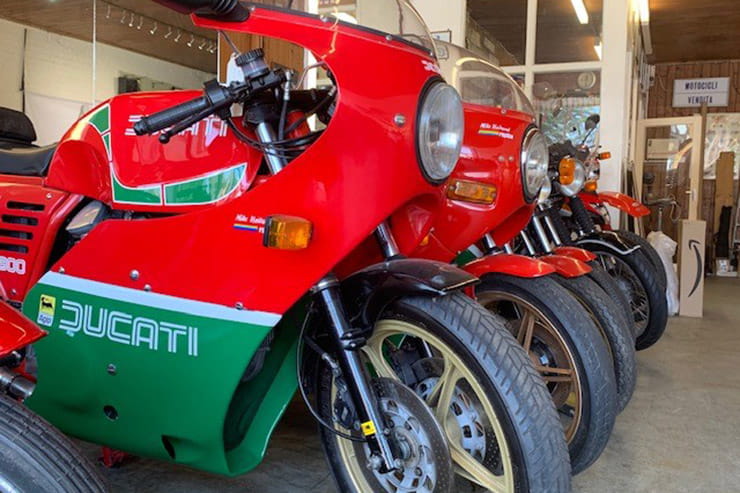 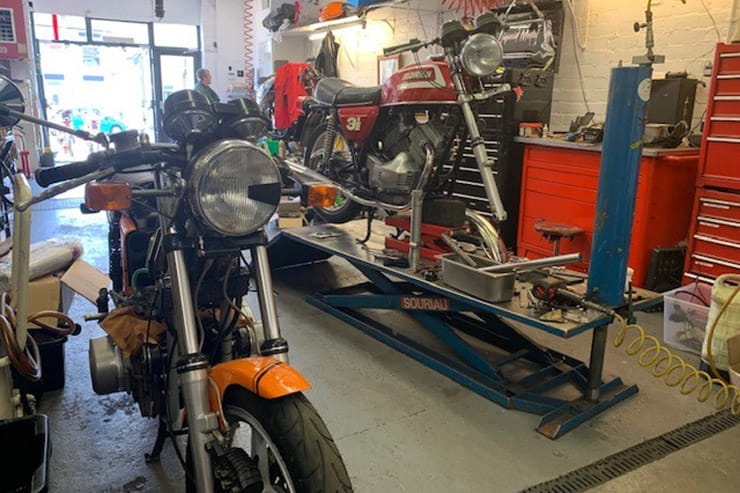 The right bikes, well-priced and a workshop you can trust; 47 years in business and still growing

How to run a successful classic bike shop

So what does it take to run a successful classic bike shop? Chris explains that the secret is relatively simple. ‘Buy the right stock, be known for something, don’t overstretch yourself and always offer good service and advice. That last bit is important because in the classic market it’s easy to buy with your heart and spend too much on a bike that isn’t what you hoped it would be.’

To illustrate the point he shows me a lovely-looking Morini 350 on the workshop bench. ‘This bike was imported by its new owner from Italy. It was described as concours and the accompanying photos seemed to back that description up. Cosmetically it is very, very good, but mechanically it was virtually worn out and wouldn’t run or ride properly.

‘Sorting it out has been straightforward, but also a lot of work which has added significantly to the owner’s spend.

You can’t blame the owner. The internet has allowed bike buying to become global and most sellers are genuine, or at least innocent, if a little misguided. Chances are the seller of this bike didn’t realise how poor it had become. 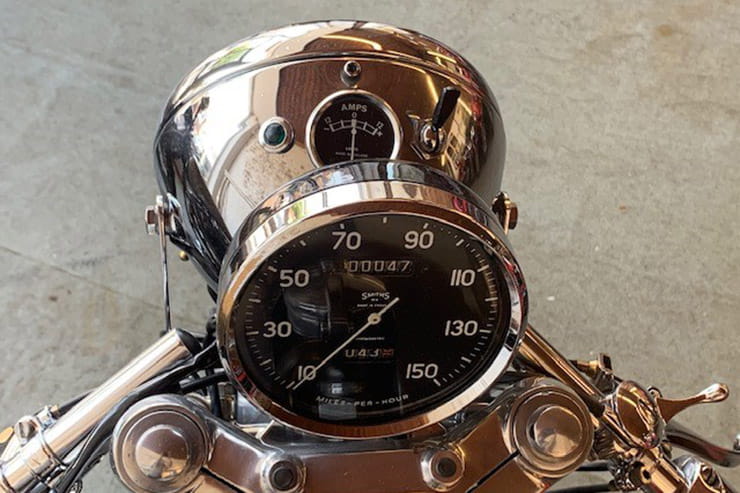 How do you value a genuine Fritz Egli built Egli Vincent? Getting it wrong could either lose you tens of thousands or have an expensive ornament clogging your showroom floor.

How to value a classic bike accurately.

The internet has done many great things for motorcycling and depending on whether you are buying or selling, one of them is to push up the values of classic bikes everywhere.

It’s harder (and bizarrely easier) to justify in the classic market because without a trade guide like Glass’s or CAP Green Book, there’s no hard data on actual selling prices to go on. Auction prices can give a steer, but usually it’s the special stuff that goes for big money in auctions and the more commonplace machines, if they sell at all, tend to go for less than in the outside world (because the buyers prepared to pay for a catalogue and turn up aren’t usually interested in a 1991 Yamaha FZR1000R).

Chris is very open. ‘To be honest, we use eBay and online prices too... as a guide because that’s where a lot of the unusual bikes turn up these days.

‘What’s important, of course is to keep a note of what bikes actually sell for. Ebay allows you to monitor this by viewing ‘sold’ listings.’

This is the important bit as a buyer, but harder as a seller because you don’t want to wait six months to advertise your bike based on whether the overpriced chancers on eBay today actually sell or not.

‘The old adage still applies,’ says Chris. ‘A bike is only worth what someone is actually prepared to pay for it. If someone out there is prepared to pay top money for a particular model, then that helps set the price. We sold an immaculate, UK-spec Honda RC30 earlier this year for more than many are being advertised for, but it was a much better bike than most and, I assume that the buyer had looked at a few of the cheaper ones before deciding they weren’t worth the money and our bike was. That’s important.’ 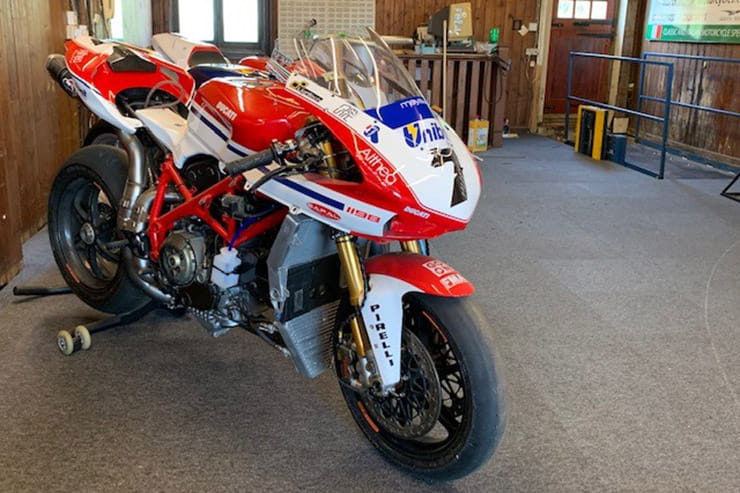 A bike is worth what someone is willing to pay. If it’s a genuine Factory race bike like this ex-Checa Ducati 1198R you’ll be looking at more noughts than numbers

So why do dealers offer me much less than the selling prices on eBay?

‘Let’s say that your bike really is worth £5000’, says Chris. ‘I offer you £3500 which sounds derisory. But the truth is that if I sell it for £5000, then 20 per cent of that (£800) goes straight to the tax man as VAT. As a dealer I have to offer a warranty and that means it must go through the workshop. By the time it’s had all the niggles sorted (and you’d be surprised how many niggles there are on even the most immaculate looking classic) and a service, that’s at least £500 more, making £1300 costs in total. So if I give you £3500, I’m actually making £200 from the £5000. Except it’s not profit because I have to pay wages, rent, electricity, business rates, marketing costs and a whole load of other costs that the customer doesn’t see.

‘Sometimes the best thing for us is for you, the customer to buy the bike from the seller for somewhere close to what they want and then bring it to us to sort out the problems - we make more profit from that. But we’re not just here for the profit. We’re here because we like buying and selling bikes.

Selling your bike to us makes the process easy. No advertising, no time wasters (and there can be an awful lot of those in the classic market and on the internet) and no worries about comeback when it blows up three days later. It’s our job to fix it now. 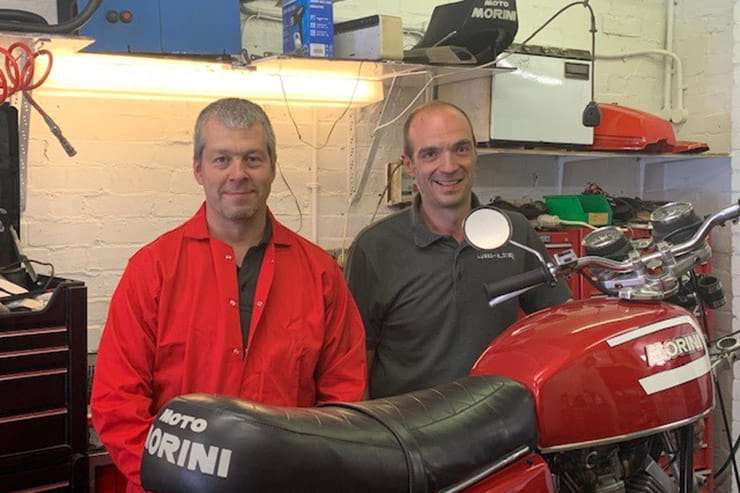