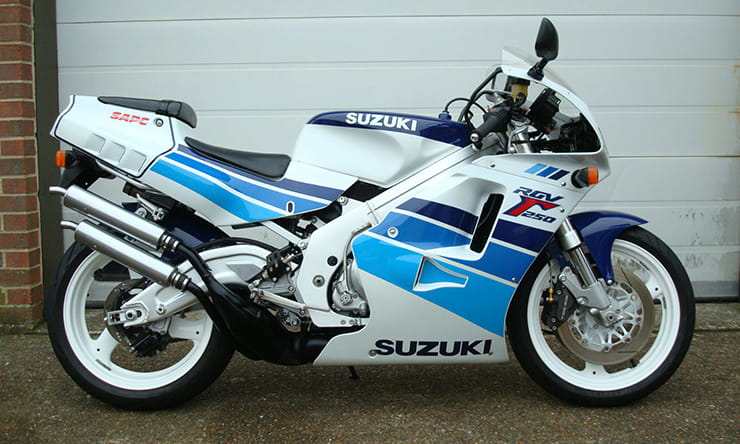 July 1991. A 25 year-old Steve Rose is working hard, muscling his newly bought Suzuki GSX-R1100 round the Yorkshire Dales. The GSX-R makes at least one million bhp, looks like the meanest mo’sickle ever and is the fastest bike our hero has ever owned. On the road between Hawes and Settle, he’s working the Suzuki hard. All arms and legs, apeing his GP heroes, man and machine in imagined harmony.

And then, out of nowhere a teeny, noisy, blue and white insect appears in his mirrors. Before our Steve has time to think the buzzsaw Suzuki has nipped past and buggered off at a pace that seems impossible. That bike was an RGV250M and that summer of 1991 was the roadgoing two stroke’s last great stand. In 12 months time Honda’s Fireblade would do faster and lighter well enough to keep and RGV in sight and the boatloads of grey import four-stroke 400s turning up on our shores took the small bike market by storm. More importantly, about that time Norwich Union pulled their Rider policy, meaning your average 18 year-old newly qualified rider could no longer insure a 125mph RGV for the same price as an £80 MZ Supa-5 and the two-stroke 250s headed off to Britain’s race tracks for a last hurrah of orange-jacket abuse and cartwheels through the gravel traps of Britain’s drizzle-coated former airfields 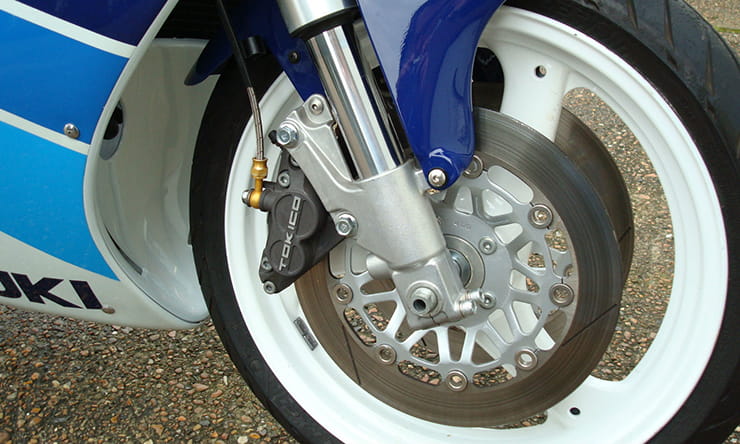 Fast forward 25 years and if you’ve spent any time scanning the classifieds you’ll have watched the prices of 80s and 90s strokers going exponential. RGV250s in particular are commanding crazy prices and the post-1991 RGV-M,N and P are the craziest of the lot. Which is weird because as a riding experience they are most numb and uneventful of any of the 250cc strokers.

We might love two-strokes for the noise and the powerbands, but the Japanese engineers were chasing power at any price. Yamaha’s 1987 TZR250 was the first to make 200bhp per litre, closely followed by the 220bhp/litre of Kawasaki’s KR-1 and Suzuki’s original RGV250 a year or so later. By the time we got the RGV250M and KR-1S outputs were close to 240bhp/litre (or about what a 2018 MotoGP racer puts out).

So sadly (?), the by-product of this progress was that power deliveries also became smoother, slicker and much easier to use. I say sadly because a two-stroke that behaved like a four-stroke was half as much fun. The 1991 RGV250 might have been impressive engineering, but an original TZR was a lot more exciting to ride. 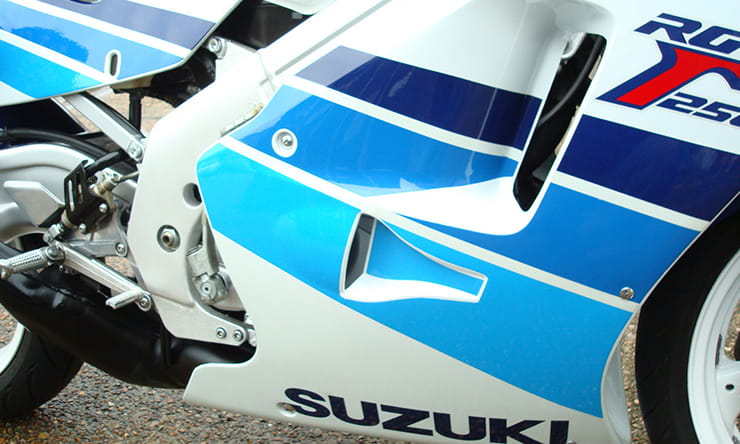 Getting this kind of power meant increasingly sophisticated digital ignitions, ever-more-complex exhaust power valves and the trickest, computer-controlled carburettors this side of a race paddock. The 1991 RGV had carbs with sensors measuring rpm and throttle position, along with computer-controlled air-bleeds. It had three-stage exhaust powervalves that broadened the powerband to the point of removing it altogether and yet, it still needed at least 9000rpm showing before the local rice pudding club got twitchy.

Back then, it didn’t matter because as a teenage ‘erbert all we needed was the fastest, slickest, sportiest, most GP-a-like bike we could afford. But now, spending £5k+ on a restored ex-race bike (because, despite what the seller tells you, it is an ex-race bike, they all are, it’s just that he was told it wasn’t and was dim enough to believe it) that’s been dragged out of many gravel traps and beaten straight, you need to be sure that the RGV experience is the two-stroke wallop you are really after.

Truth is, an early RD350LC is much more, er, ‘emotional’ to ride, but they are even more expensive and just as likely to have spent half their life cartwheeling down Craner Curves.

And riding an RGV well is hard – much harder than you remember because back then, everything else was so heavy, baggy and ill handling that you didn’t need to be that good to be the bloke overtaking our hero at the top of the page on his GSX-R. In 2018, your newly-recommissioned RGV will be left for dead by a Yamaha MT-07 on the straights, in the corners and pretty much everywhere apart from the bike meet full of other nostalgic former teenagers.

Which is fine if your head is managing the purse strings. Unfortunately, biking doesn’t work like that and in these days of ten-feet tall, fully-accessorised, 300kg ugly-brute adventure bikes, walking past a shiny, tiny, pristine-looking RGV250M is an all-too-sad reminder of how we’re not the men we were and how motorcycling has become grown-up, obese and a lot less impulsive than it used to be.

In 1991, the RGV250M was as special as Honda’s RC30 to your average rider. It had upside down forks, a rear tyre the same size as an original 1986 GSX-R1100 and stacked, twin exhausts that looked just like Kevin’s. 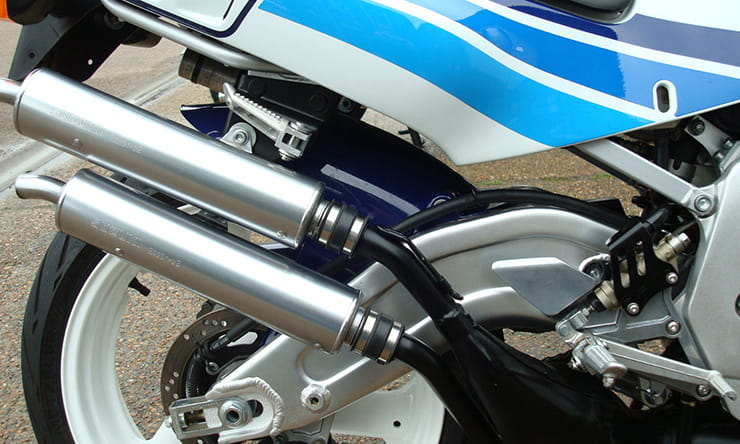 For some people it doesn’t matter that an RGV is difficult to ride, embarrassingly slow by modern standards (especially with a rider two stone heavier than they were in 1991) and suffers at least one major breakdown every summer (because the person who restored it spent a lot more money on the paintwork and engine than on the 27 year-old electrics, and modern fuel gums up carbs, rot the inside of fuel tanks and dissolve fuel lines and fuel tap seals). They want one now because the summer they spent on their previous one was the one where they overtook superbikes, the one where they were kings of the local roundabout and the one where they first got their knee down. £5000 to relive all that joy? It’s a bargain.

The best way to buy an RGV250 is find one that someone else has done all the work on and keep haggling till you get it at the right price. Don’t forget that prices are rising and you will make your money back, but don’t forget also to budget at least another £1500 for the things you’ll need to fix that haven’t gone wrong yet. 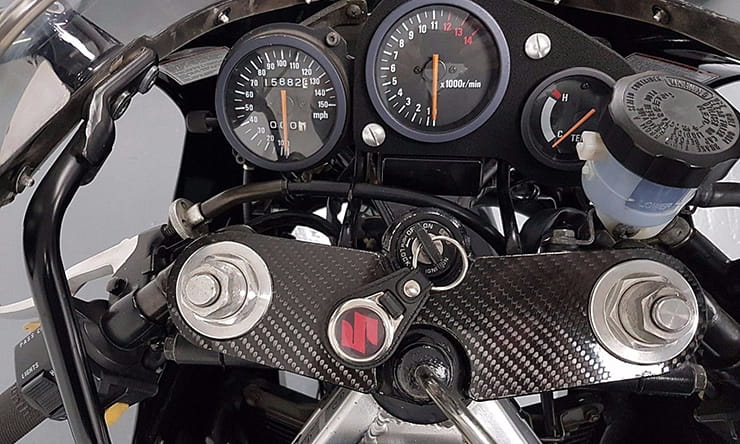 Don’t be tempted to buy and earlier K or L model because they were even harder to ride, even less reliable and are worth half the price of an M,N or P whatever the seller says.

And the one important thing…the one promise you have to keep is that you ride it regularly. As in a couple of thousand miles a year because doing that will keep it running much better than doing 273 miles a year like everyone else who owns one.

If it blows up, tough. It’s only a ‘thing’, not one of your children and it can be repaired. And it’s going to blow up anyway even if you don’t ride it, just for a different reason.

And who knows, if you ride it often enough, you might actually work out how to ride it well enough too to embarrass that other nostalgic old geezer on his GSX-R1100 on the Hawes road. 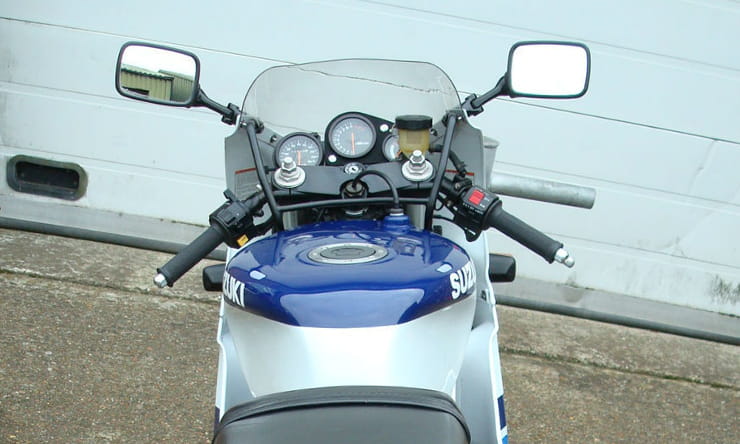