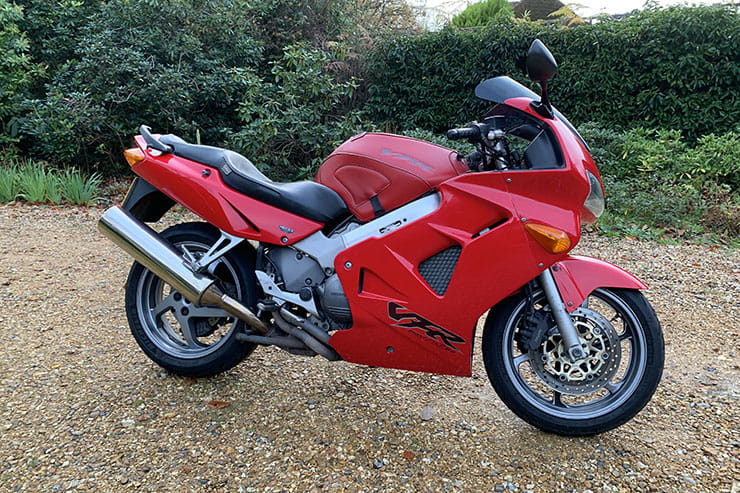 This 2001 VFR800 has had one owner from new who did 94,000 miles. Unbelievably, it is almost completely original, right down to the light bulbs, fork oil and brake hoses. We paid £500 for it, now it’s time to find out more… 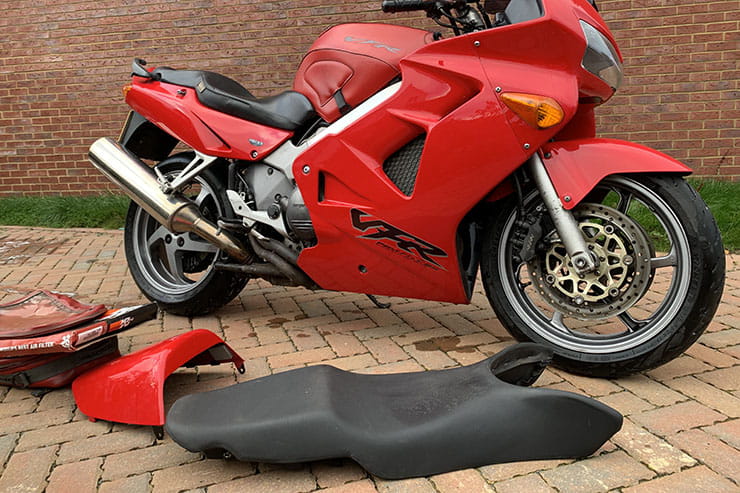 An interesting fact I learned today. Just supposing you bought a new Honda VFR800 in 2001 and ran it for nineteen years, adding 94,000 miles to its bores, in all that time, the average cost would have been 25p per mile for everything including cost of the bike, fuel and tyres used, spare parts, insurance…the lot. That 100-mile Sunday ride would have cost £25, a 3600-mile tour around Europe would be £900 (not including hotels and food) and your weekly 150-mile commute would be £37.50.

In those 94,000 miles you’d have used 8091 litres of fuel at a cost of £8948 with an average consumption of 52.8mpg. Eleven rear tyres and nine fronts at a cost of £1702 plus a further £239 in fitting. Oh, and just under £3000 on insurance. I know this because the previous owner of the VFR BikeSocial just bought kept a spreadsheet of every single cost including every single tank of fuel for the entire time he owned the bike. £12,433 plus the £7350 he paid for the bike in 2001. And it makes fascinating reading. 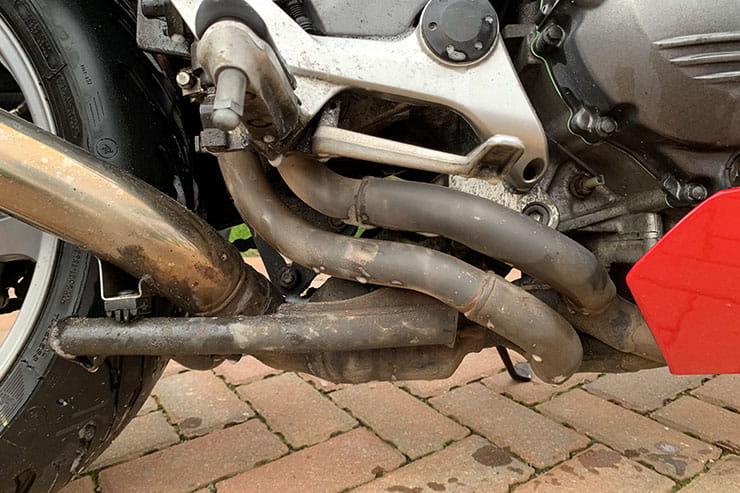 Exhaust is original and has already done around 75,000 more miles than most. Gulp.

Back in the dark ages I went on a sales training course where the takeaway moment was how ‘People buy from people they like’. I’m reminded of that (and the cheesy 1960s marketing line ‘You meet the nicest people on a Honda’ too) as I ride away from probably the most enjoyable bike buying experience I’ve ever had.

I don’t need another motorcycle and I certainly don’t need another 20-year-old all-rounder, but we’d been talking about a project bike for BikeSocial and on my regular browse round the classifieds I saw an advert that kept me going back.

This 2001 VFR800 caught my attention because it’s had one owner from new and done 94,000 miles. More than that though, the pictures in the ad revealed that not only was it almost completely standard (the screen and seat were aftermarket), but it looked in surprisingly good condition.

Something about the way the advert was written suggested the seller was an interesting character. That turned out to be an understatement. Our new VFR is still on the original exhaust…and shock absorber…and fork oil…and brake discs…and brake lines…and the original headlight, tail, and brake light bulbs too.

It’s had the oil and filter changed 11 times (including the 500-mile first service), but never had the valve clearances checked. Martin, the owner apologised, ‘I just sort-of forgot the first time and then, with the engine so quiet and showing no signs of being out-of-adjustment, I just never got around to it.’ 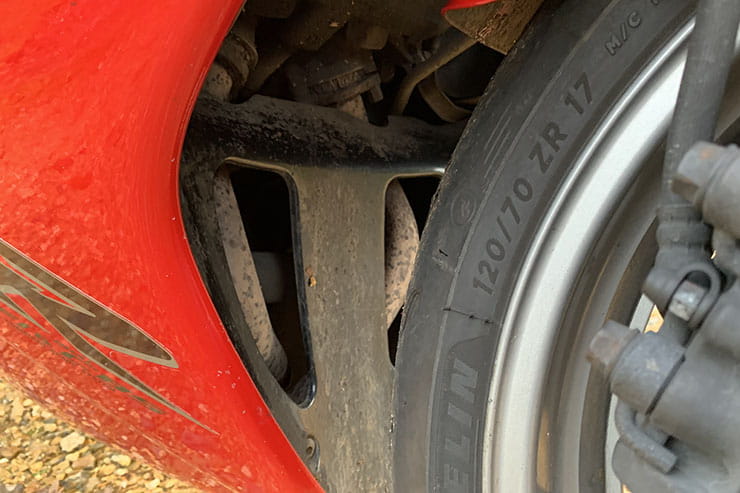 Doesn’t get any prettier when you get close up either, but it’s not blowing (yet)

I should point out here that Martin is a former engineer, not afraid to get stuck in mechanically and even as he explains the lack of valve adjustment I don’t mind because I trust him. He’s ridden the bike 3500 miles to Spain and back most years including last September when it was already showing 90k+ miles. It’s never failed an MoT and despite his modesty, I suspect that is down to the fact that he regularly strips it, checks it and is confident that nothing is about to break.

Walking around the bike is interesting. It’s not immaculate, but it is honest. There’s a touch of gravel rash on a fairing panel, where (according to the spreadsheet) it fell off the side stand in Devon in March 2014 at 62,700 miles and broke the clutch lever. There’s still some damping in the suspension, still some sparkle in the paintwork and the finish on the wheels is unbelievably good for a bike that commuted through its first eleven winters. 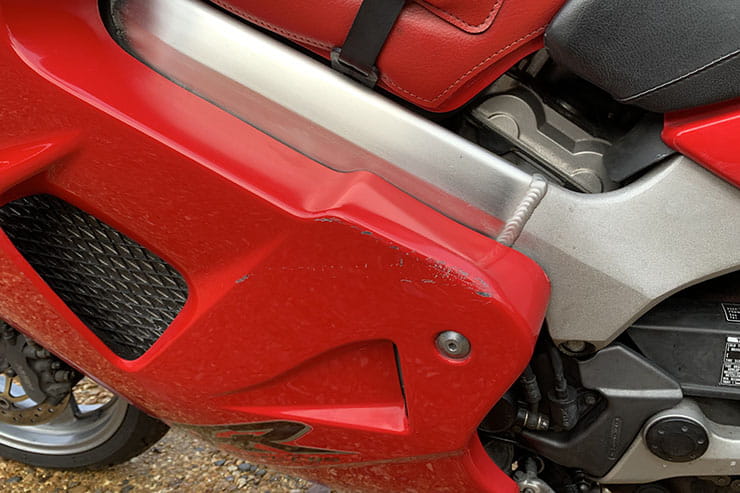 This and a broken clutch lever are the only crash damage from 94,000 miles and 20 years.

The VFR starts eagerly on the button, sounds like an engine with a quarter the mileage and a quick test ride shows that it pulls like one too. It’s been a long while since I rode an early VFR800, but it soon comes flooding back. A little rough at low revs in high gears (Honda’s early fuel-injected bikes passed the noise test by enrichening the mixture at around 4500rpm which flattens the engine note) and the tacho always seems to be showing 1500rpm more than you expect. And once you open it up the whole thing seems to sharpen as it accelerates in that lovely precise way that Honda V-fours do. It’s still a lovely engine and the fuel-injection is much better than I remember those early Honda systems being. 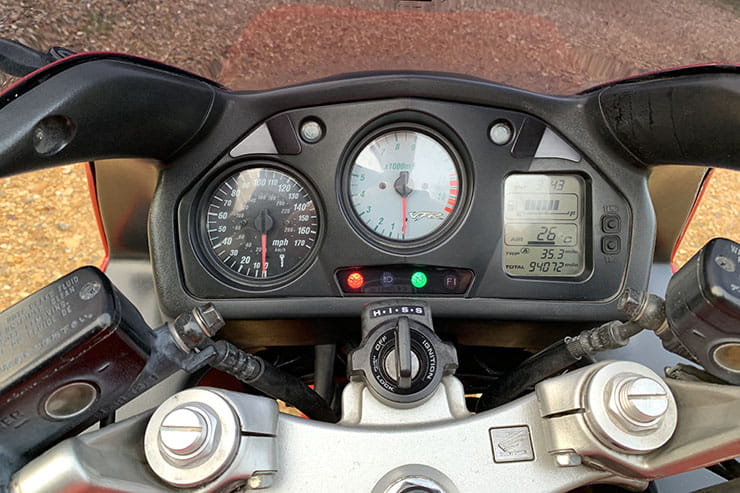 That’s a lot of miles, but look how clean the top yoke is. This bike has been looked after.

Anoraks – and those of us who went on the original VFR800 press launch in late 1997 - will also remember that the 1998-2001 VFR800 engine was based heavily on Honda’s RC45 racer. Those of us who made motorcycle magazines in the nineties and noughties saw at first hand the difference between the way Honda and everyone else made their motorcycles. As a road tester it was all-too easy to praise a Suzuki’s flickable handling, Kawasaki raw power or Yamaha’s innovation and sense-of-fun. Hondas were often dismissed as the sensible choice, which rarely makes for a road test winner. But those of us working on RiDE magazine, doing in-depth testing on second-hand bikes saw first-hand the difference in build quality between older Hondas and everything else.

Comparing the clutch, throttle or brake action on a ten-year-old CBR600 to bikes from the other makers was night and day. And when buying used that matters. We once bought a tatty 85,000-mile VFR750 and stripped it down to find that, in the engine, at least, nothing was worn beyond service limits.

At some point I’d like to do the same with this VFR (if only to check the valve clearances), but right now that seems unnecessary. We’ll never get another chance to know just how long an original exhaust lasts, or a shock absorber, or brake discs. When something major breaks, then we’ll strip it down.

Until then, the plan is to change the fork oil, maybe at least have a look at the valves, change the tyres (the Michelin Pilot Road 5s currently fitted are approaching 11,000 miles and affecting the steering) and just ride it. Maybe when we get to 100,000 miles, that’s the time for a strip down. Once apart we know what’s left of the exhaust won’t go back on and there’s no point refitting a 100k shock absorber or brake hoses. But that’s kind-of the point. If you bought this bike for what we paid for it, you’d be grinning like an idiot for getting so much bike for the money. 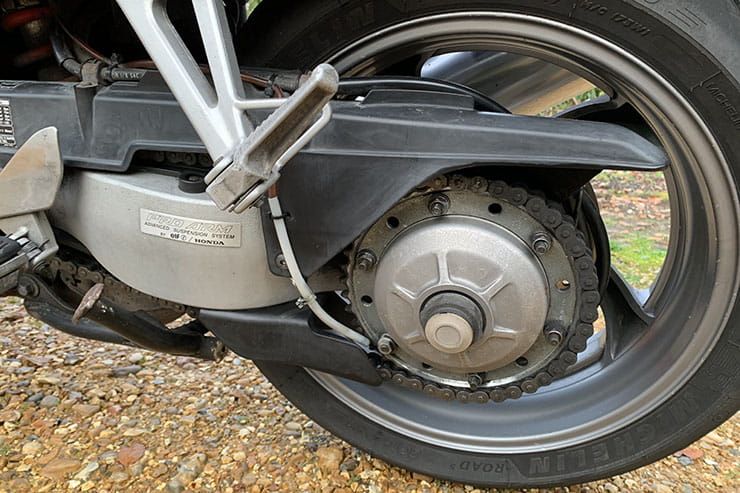 The first chain lasted 62,000 miles. This one is still pretty good at half that. Thank you Scottoiler.

Deciding to buy the VFR was easy. Working out how much to offer was much harder. Based on overall condition and the way it rides, the asking price of £995 was a bargain. But allowing for the fact that all those original parts could need replacing in the next six months and that the tyres need replacing now, I could easily end up with a high-mileage bike that by June has cost as much in total as one that’s covered half the distance.

But you wouldn’t have the spreadsheet that gives the confidence to head off for your own Spanish adventure.

In the end Martin, the owner’s honesty made it easy. He’s just bought a Triumph Sprint and the dealer had offered £350 for the VFR as a token part-ex gesture. He was very open to offers. I wasn’t going to insult him, and I liked the sound of ‘The £500 VFR’, so that’s what I offered, and he happily accepted. 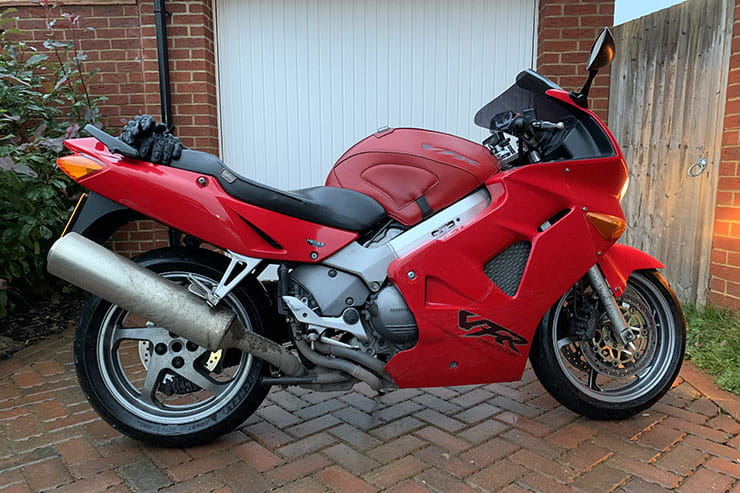 Riding it home was a reminder of just how lovely these old VFRs are.

It cost £36 to add it to my insurance and the long way home (74 miles) in the wet was a pleasure. Obviously, I took it steady at first, nerves jangling, ears pricked and senses on standby, waiting for a fluffed throttle, unexpected noise or any odd behaviour from the brakes and suspension.

I’d forgotten how Honda’s linked brakes reduce the dive making it feel like the brakes aren’t that good. I’d forgotten too just how versatile those gear-driven cam Honda V-fours are. Faster than you remember when you keep the revs high, but easy as you like pussyfooting through winter slime on a bumpy B-road. In those conditions this VFR didn’t feel like an old bike, just a strong, re-assuring chunk of Honda-ness.

Out of interest when I got home, I had a look around the classifieds to see what else I could have bought for £500. Aside from a few ten-year-old anonymous Chinese mopeds and 125s, plus a handful of damaged or broken middleweight Kawasakis and Suzukis that needed a lot of work, there was nothing that even came close.

So, what’s the plan for our new VFR? The aim is to get it to 100k as quickly as we can. Do some touring, put it on the dyno, maybe speed test it and perhaps even a track day in the summer. My view is that we should get the valves checked because I’m curious to see how in or out of adjustment they are. And then, once the weather is better and lockdown ends to assess how worn the suspension and brakes actually are and decide on appropriate replacements. The elephant in the room is the exhaust of course. These bikes are known for rusting downpipes, and when the ones on our bike finally let go it’s going to be an interesting job to loosen 20-year-old bolts. We’re expecting a tricky job and, if we’re going to have to dismantle most of the bike to do it, that might also be the time to strip down the motor too.

It’s going to be an interesting summer.