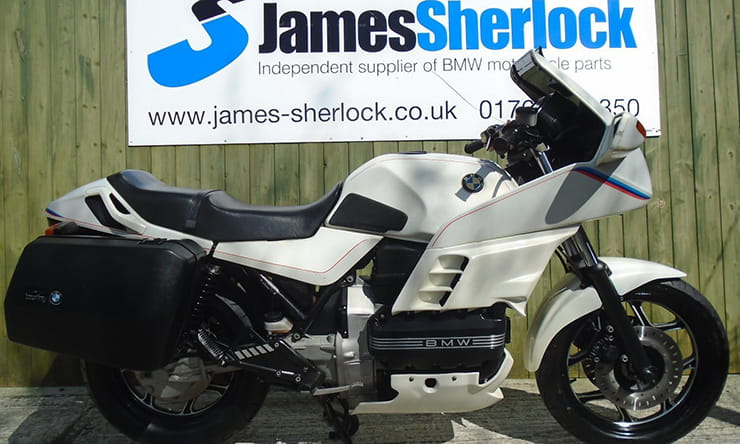 The 1980s were a good time for motorcycling. Engine, chassis, suspension, aero and tyre technology all advanced dramatically in those crazy ten years. The halo machines will always be the GPzs, GSX-Rs, FZRs, VFRs and fuel-injected Ducatis. But possibly the most radical machine of them all appeared before any of those had earned their hyperbolic MCN shouty headlines.

BMW’s 1983 K100 wasn’t the first water-cooled modern four-stroke (Honda Gold Wing), or the first to use fuel injection (Kawasaki GPz1100 and Z1300) or the first to use aerodynamic fairings (BMW’s own R-series twins) or shaft drive (take your pick). But it was the first to combine all those things in one reliable, coherent package. And the K100, especially in half-faired RS form was a much better motorcycle than history gives it credit for.

The reason behind it was emissions. BMW’s air-cooled, carb-fuelled flat twins were struggling to meet American restrictions and at the time it was felt that water-cooling, smaller cylinders and fuel injection were the answer. BMW considered a flat-four like the Gold Wing, but went with a conventional in-line four and then mounted it unconventionally by laying it down and then turning it through 90 degrees as a solution to a question asked by no one…ever. Who says the Germans have no sense of humour? 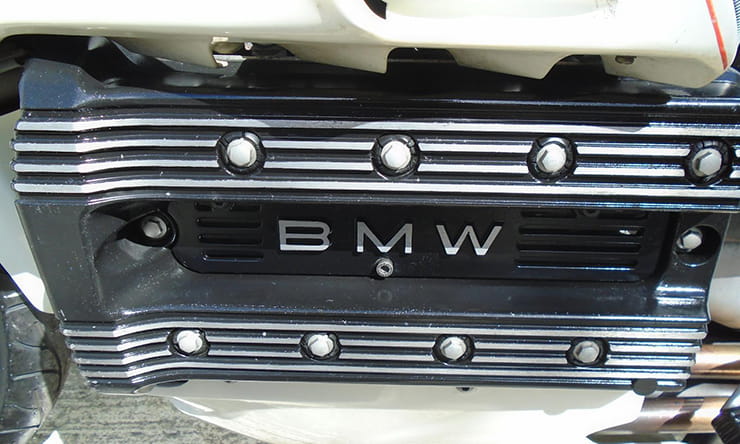 BMW, being BMW, chose not to make their new bike the fastest or sportiest thing out there because, back then they weren’t really interested in that. So the K100 claimed 90bhp (less than the air-cooled Japanese superbikes of the day or the GPz900R/GSX-R750 a year later) at relatively low revs, was easy to use, with accessible power and a real world top speed in a low state of tune that would keep it reliable for hundreds of thousands of miles.

It wasn’t just the engine that was pushing the boundaries either. The chassis might have looked like a conventional steel affair but was actually a space frame, with the motor acting as a stressed member hanging from it. No one gave BMW credit for what was actually a very light bike for the time. At 249kg fully fuelled and ready to go, including the heavy final drive shaft, the K100RS was lighter than a Kawasaki GPz900R, Yamaha FJ1100 or Suzuki GSX1100EF.

No one really gave Nick Jefferies enough credit either for coming eighth in the 1984 Production TT on what was a very-close-to-stock K100RS complete with mirror pods, indicators and number plate, but missing the panniers and pillion.  BikeSocial suspects he would have finished higher up the field if he could have worked out the quirky indicator switches before Ballecraine and  hadn’t got his slippers caught in the footpegs (sorry, but it’s a lazy, outdated journalistic tradition that no one can mention pre-2008 BMWs without mentioning pipe or slippers – like actors having to call Macbeth ‘The Scottish Play’ – I’m just doing my job). 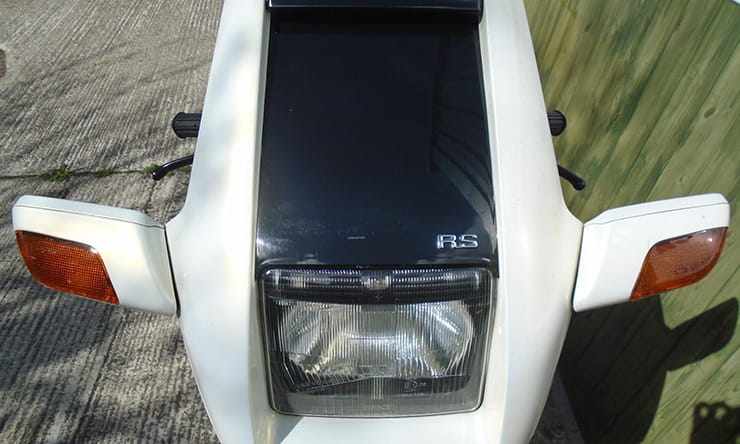 By the time we got to 1985 motorcycling was distracted by crazily fast RG500s, FZ750s and GSX-Rs. All of which had engines that revved faster than anything had ever revved before, made so much power we ran out of exaggerational ability to describe how fast they went and handled like a racer (don’t they all?) too. At a time when the average age of a UK motorcyclist was about 25, the chances of anyone getting excited about a high-tech, leisurely revving, comfy sports tourer with panniers, as ridden by your local bike cops, were about the same as Wham recording a prog rock jazz odyssey.

Thankfully for BMW (and a generation of café racer builders 30 years later) there were enough middle-aged, would-be motorcycle tourers who understood exactly what was good about a K100 and were happy to pay the premium price for a bike that would happily go round the world as well as it went to work and was actually really enjoyable to ride once you’d got the hang of its quirks. Riding a K100 well takes time. The throttle is heavy, as is the clutch and engine picks up revs slowly, but once spinning has a lovely, linear torque curve. BMW never worried about convention when designing handlebars so the RS versions have low, flat, narrow items that are completely unlike any other bike, but once you get used to them are both comfy and easy to control. The RT versions have what are essentially apehangers transplanted from a borrowed chopper and dressed up to look a bit more Germanic. Again, they work surprisingly well. 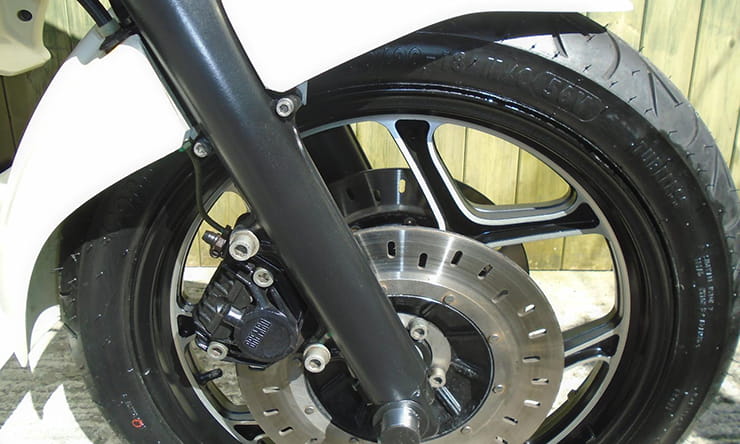 Brembo brakes work in their own time and no amount of extra lever pressure will hurry them along but you soon get used to it. And while the K’s chassis steers easily, when you give it some gas the primitive shaft-drive digs in and tries to lever the bike upwards which, makes you run wide. Riding an early K100 makes you realise just how effective BMW’s modern Paralever systems are.

Once you’re used to it the handling is ok, especially given the narrow crossply tyres, with few surprises. Later versions got 16v engines, proper radial tyres, better shaft drive and motorcycling’s first ABS system. There was even a 750cc three-cylinder version – the K75 – for anyone who wanted something just as heavy but considerably slower. And because they were expensive and bought by people who understood the value of dealer servicing, a good number of bikes were properly maintained well into the 1990s.

Obviously that all stopped a long time back and an early K100 has been bumping along the bottom of motorcycle hackery for at least 20 years and so most are very tired by now. Even the later 16v versions are cheap and a malfunctioning ABS unit (not uncommon) will cost far more than the value of the bike to fix so be wary of anything that’s being sold as a ‘project’ or not MoT’d. 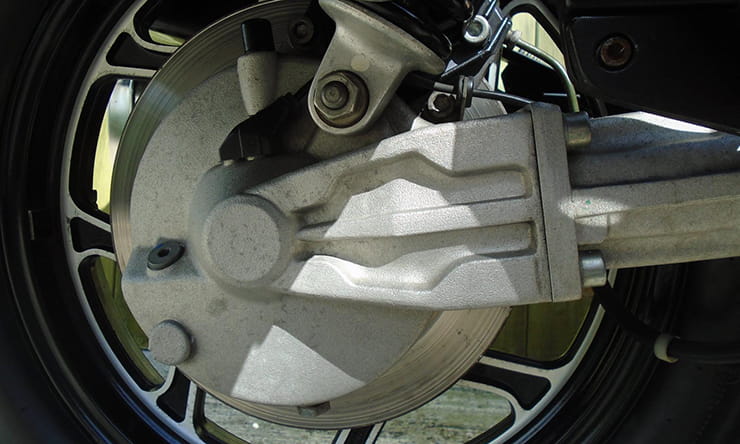 Other than that most of the problems will be obvious. It should start easily, run smoothly, not overheat and change gear consistently (they were never exactly slick). Expect a bit of smoke from oil burnt on start-up when left on the sidestand, but it should clear once warm. Check that any electrical accessories work and be aware that the electronic instruments can fail and so replacement clocks (and therefore inaccurate mileage readings) are common. Centrestands rotting and then collapsing is one of the problems that seem to catch out the unwary most often so check it carefully.

New spares are scarce but there are plenty of pattern parts, plenty of used spares and a handful of independent BMW specialists around the UK who supply parts and knowledge enthusiastically. The bike in our photos is on sale at James Sherlock in South Molton (www.james-sherlock.co.uk).

Recent interest from the hipster café racing community has pushed prices up. A well modified K100 is a good looking, quirky bike and a lot more practical and useable than many donor bikes in this scene, so we can see why.

Prices seem to hover around £1000-£2000 regardless of whether it’s a good buy or a hound so take your time and buy the right one, not the first one – there’s plenty of choice if you are patient. Our recommendation would be either a non-ABS 16v K100RS or K1100RS or the fully faired RT model in 8v spec. Ride it slowly, enjoy the view and wonder how it can be possible to get such a lovely, comfy, easy to ride motorcycle for so little money. 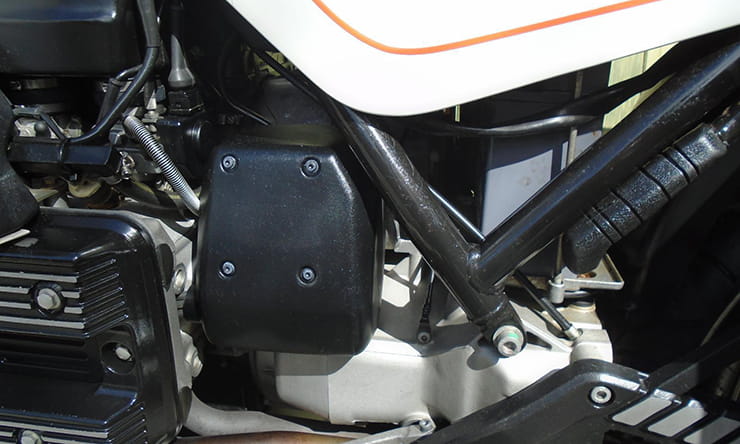