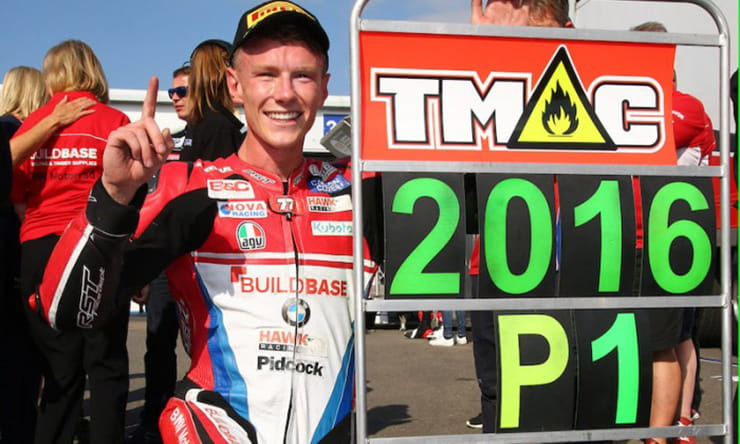 Bennetts Suzuki's Sylvain Guintoli will be joined by Taylor Mackenzie to form the two-pronged attack on the British Superbike Championship in 2017 on the new Suzuki GSX-R1000. The team also retains the services of Richard Cooper who is set to defend the team title in the National Pirelli Superstock 1000 Championship also on a GSX-R1000.

Taylor Mackenzie impressed both on and off the track last year with his pure determination and undoubted ability. Dominating the Superstock 1000 series from round one the 23-year old continually made progress throughout the year and has proved hard work pays off. Leaving the Superstock class in the safe hands of his team-mate Cooper, the Stirling born rider now makes the step up into the Superbike class.

Taylor Mackenzie said, “I'm over the moon to be stepping up to the Superbike class in 2017 with Bennetts Suzuki and Hawk Racing. I couldn't have asked for a better 2016 and I learnt a lot during the year so I feel like now is the perfect opportunity to move up to BSB. I'm also very excited to ride alongside Sylvain Guintoli next year as he has a lot of success and experience that I'm sure I can learn from. I really can't wait to get going now, Christmas has come early for me!”

I can't wait to get going now. it's like Christmas has come early!
Taylor Mackenzie, Bennetts Suzuki

Team boss Steve Hicken, said, “Sylvain, Taylor and Richard are all top riders, and between them they’ve a wealth of knowledge and experience of racing at different levels. We’re delighted to retain the services of Taylor after he had such a successful year, dominating the stock class. We were very keen that our 2017 plans should have a solid mix of experience and young British talent which I believe we now have in a perfect combination. We are fully committed to racing, as are the riders and together with the factory support from Suzuki I feel that we can challenge for both Championships next year. 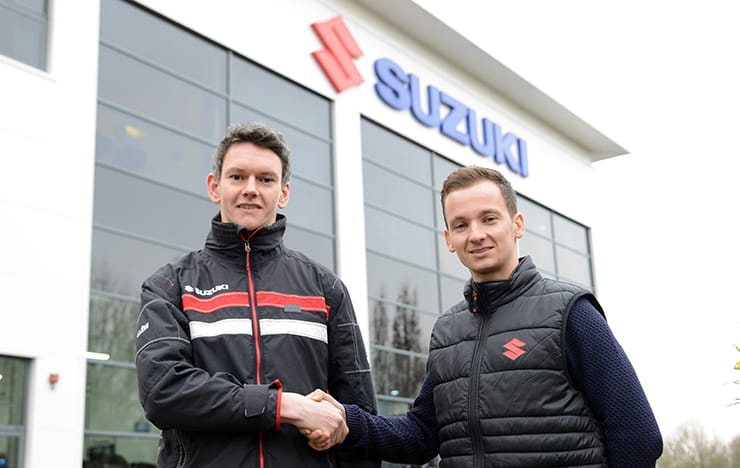 Richard Cooper has a well-established relationship with Hawk Racing, having ridden under the team’s banner during 2011 where he lifted the Stock 1000 trophy and again last year in the Superbike series. With the teams switch from BMW to Suzuki and the all-new GSX-R1000 Cooper (pictured above with Suzuki GB Marketing Manager Rob Cooper, unrelated) was keen to stay within the fold where he will put his skills and expertise to use, challenging at the front end with his sights firmly set on taking the Superstock 1000cc Championship trophy once more.

The series format has changed from 2016, with the inclusion of longer race formats it plays right into the Nottinghamshire riders’ hands. Having competed in the British Superbike class for the last three years, the 33-year old is familiar with longer races and is thoroughly looking forward to the challenge. The new regulations have heightened the Championship status and with factory support from Suzuki, Cooper is positive that he can lead the team and Suzuki to success in 2017.

Cooper said: “I'm really excited to go racing next year for lots of reasons. Firstly, being involved with the new Bennetts Suzuki team is something that really appealed to me, I know how important it will be to the manufacturer to fight for the Superstock championship in 2017 and with the new format of races it should work in my favour."

He continued, "I've proved I can win races in any championship that I choose to ride in and Hawk racing has won this title twice before once with Taylor Mackenzie last year and I won it back in 2011 for them so I know I've got the best team around to do the job. I'm under no illusion it will not be easy next year as there is already a long list of ex BSB riders and already well established Superstock riders ready for the fight, but, the one advantage I have is the new GSX-R1000 looks very good on paper and even better in real life and with the direct factory support we will be getting I'm sure we will be a winning combination.”