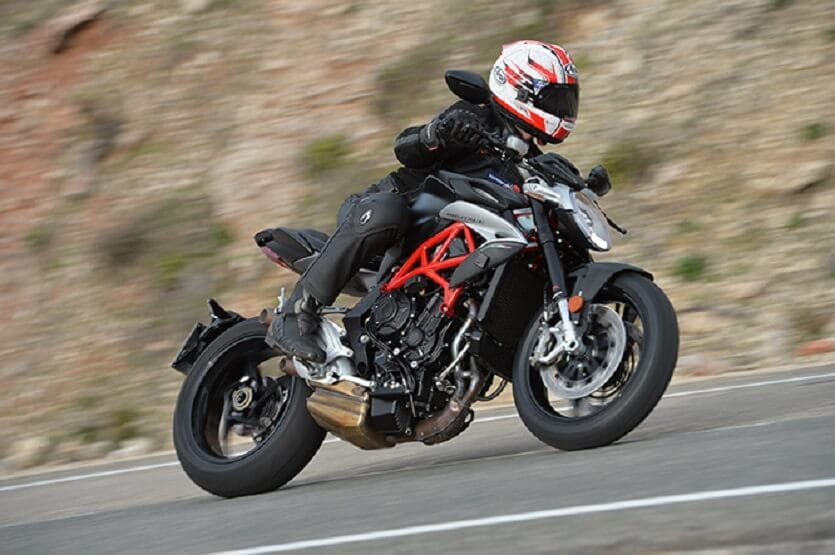 MV Agusta was originally a division of the Agusta aviation company, which was established by Count Giovanni Agusta in 1923. After his death in 1927, his wife and four sons remained at the centre of the business.

MV Agusta as a motorcycle manufacturer was founded in Cascina Costa, near Milan, Italy, 18 years later in 1945. Two of Count Giovanni Agusta’s sons, Count Vincenzo Agusta and Domenico, formed the company at the end of World War II in an attempt to save the jobs of employees of the Agusta firm and to satisfy the demand for cheap transportation post-war.

The company initially produced small-displacement, café racer-style motorcycles of 125 to 150cc, but when small motorcycle sales declined in the Sixties, MV began producing larger displacement bikes from 250 to 750cc.

Shortly after its establishment, MV Agusta tried its hand at racing – Franco Bertoni won its first Grand Prix in 1948. This started a run of on-track success for the manufacturer, and it went on to dominate the 125, 250 and 500cc classes in 1956, 1958, 1959 and 1960. With legendary riders such as Giacomo Agostini, Mike Hailwood, Phil Read and John Surtees in the saddle, MV won a total of 270 Grand Prix motorcycle races as well as the infamous Isle of Man TT 34 times.

Between 1948 and 1976, MV Agusta had won more than 3,000 motorcycle races and 63 world championship titles. However, when Count Domenico Agusta died in 1971, the company lost its focus. MV won its last motorcycle race in 1976 and by 1980, the manufacturer had retired from racing. Shortly after this, the company ceased motorcycle production altogether.

Over the past 20 years, MV Agusta has been bought and sold a number of times. Cagiva purchased the MV Agusta trademarks in 1991, introducing the first new MV Agusta motorcycle, a four-cylinder 750cc sports machine (the F4 range) six years later. However, when the Cagiva group was restructured in 1999, MV Agusta became the main division, comprising Cagiva and Husqvarna.

Most recently, Harley-Davidson acquired the MV Agusta Group in 2008. However, just a year later, the American Motor Company sold it to Claudio Castiglioni and his holding company, MV Agusta Motor Holding, S.r.l.

As a motorcycle insurance specialist, we provide competitive insurance quotes for motorcycle owners. We work closely with our panel of insurers to make sure that you get our best deal to suit your insurance requirements.

Your motorcycle insurance policy comes with a number of benefits as standard, including cover when riding other motorcycles (qualifying criteria applies) and 90-day European Union insurance. We can also provide multi bike cover, helmet and leathers cover and RAC Breakdown cover for added peace of mind when you’re out on the road on your MV Agusta motorcycle.

How to get a quote for your MV Agusta motorcycle

Getting an insurance quote for your MV Agusta motorcycle couldn’t be easier. We search our panel of insurers to find you our best price for the cover you need.

Whether you ride a Brutale or a high-performance F4, simply complete our online form or call our dedicated customer service team on 0330 018 7990, who are on hand to find our best deal for you.

Sources of interest for MV Agusta owners and fans

MV Agusta website – the manufacturer’s official website features information about its current models, history of the brand, latest news, dealer locator and even an online shop for MV Agusta apparel.

MV Agusta owners club – this owners club is open to all enthusiasts of the MV Agusta brand. The club organises regular events across the country including track meetings, concourse events and local gatherings, and provides technical advice and resources for owners of modern and older MV Agusta motorcycles.