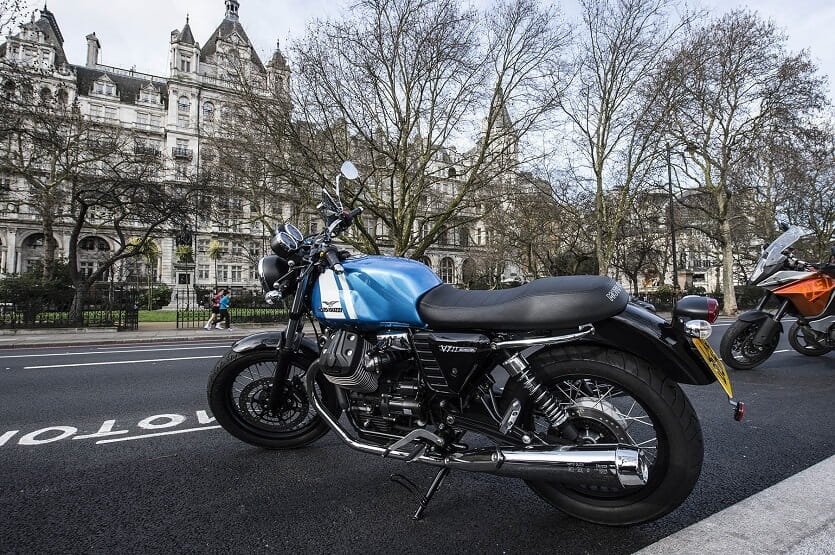 Moto Guzzi was the original dream of two aircraft pilots and a mechanic: Carlo Guzzi; Giovanni Ravelli; and Giorgio Parodi, in Mandello del Lario, Italy, in 1921. After World War I, the friends wanted to develop a motorcycle company, but sadly, Ravelli died shortly after the end of the war in an aircraft accident. His memory is commemorated by the eagle's wings in the Moto Guzzi logo.

Moto Guzzi's first engine design was a horizontal single-cylinder, and the manufacturer used racing activity to promote its brand. At the 1935 Isle of Man TT, rider Stanley Woods scored impressive victories in the Lightweight and Senior TT races for the manufacturer.

To meet with new demand, Moto Guzzi began manufacturing inexpensive, lighter motorcycles, such as the 65cc Motoleggera and a 175cc Galletto scooter. However, the company hit full financial crisis in 1964 before state-controlled receiver SEIMM took ownership of it three years later.

Aprilia S.p.A acquired Moto Guzzi S.p.A in 2000, before both companies were taken over by the Piaggio group four years later. Substantial investment since then has enabled Moto Guzzi to develop a series of competitive new models.

For the current range of Moto Guzzi models, please visit the website

Your motorcycle insurance comes with a number of benefits as standard. These include cover when riding other motorcycles (qualifying criteria applies) and 90-day European Union insurance, so that you can enjoy riding your Moto Guzzi on the continent

How to get a quote for your Moto Guzzi motorcycle

Getting an insurance quote for your Moto Guzzi motorcycle is easier than you may think. Whether you’re looking for comprehensive, third party or third-party-only insurance cover, you can trust Bennetts. We search our panel of insurers to find you our best price for the cover you need.

Simply call us on 0330 018 7990; our UK-based team of advisors has more than 85 years experience in sourcing our best possible Moto Guzzi motorcycle insurance quotes. Alternatively get a quote online.

Sources of interest for Moto Guzzi owners and fans

Moto Guzzi Official Website – the manufacturer’s official website has everything you need to know about Moto Guzzi motorcycles from the past to the present including an informative museum section.

Moto Guzzi Club – the Moto Guzzi Club was established in 1976, and from a group of 40 enthusiasts, has grown into a national club spanning the UK and Ireland with more than 3,000 members. The site features an image gallery, news section, interactive forum and even a club shop for merchandise.