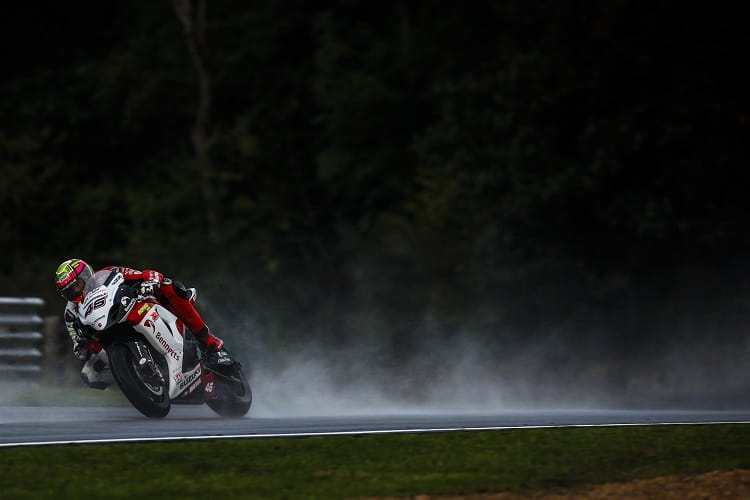 Tommy Bridewell rode to an impressive fifth place finish in today’s race at Brands Hatch, negotiating the treacherous conditions to bring his Bennetts Suzuki GSX-R1000 home safely in the first of three races this weekend for the British Superbikes' season finale.

After qualifying on pole position, Bridewell made a strong start when the race initially got underway in dry conditions, holding second place early on before it was red-flagged. Again starting from the front row in the restart, Bridewell made a poor start and looked to have given himself work to do, but the race was again red-flagged as rain began to fall.

The race eventually got underway in wet conditions, with Bridewell again launching his Bennetts Suzuki off the line from the front row. In what quickly became a race of attrition, Bridewell dropped back from the leading group, but latched himself onto the back of the fight for third place, eventually finishing fifth, less than a tenth of a second away from snatching fourth in a race that saw only 16 riders take the chequered flag.

Tommy Bridewell, “That was really tough out there to be honest. There was grip in some places and there really wasn't any in others. Without the red flags, in the dry, I thought we could really challenge for the win, and at least get onto the podium. In the wet we were just missing a little bit to battle for the win, but our pace was good and fifth is a strong result, and we weren't that far off third. The weather looks a bit iffy for tomorrow, so we'll tweak our setup in warm up, and hopefully we can finish the season off with a podium.”

Martin Halsall, Bennetts Suzuki team owner, “I think that’s the most nervous I’ve ever been watching a motorcycle race. We saw so many riders crashing out and having moments, but Tommy kept it safe and sensible, and fifth place is a good result in those conditions. We’ve not had any wet track time this weekend, apart from the one flying lap in Q3, so it’s always a bit of a lottery out there, but the guys in the garage got the settings close enough to give Tommy a competitive package. We didn’t quite have enough to fight for the win, but it was a good performance, we were close to the podium, and we’re confident of fighting for the podium again tomorrow, regardless of the weather.”