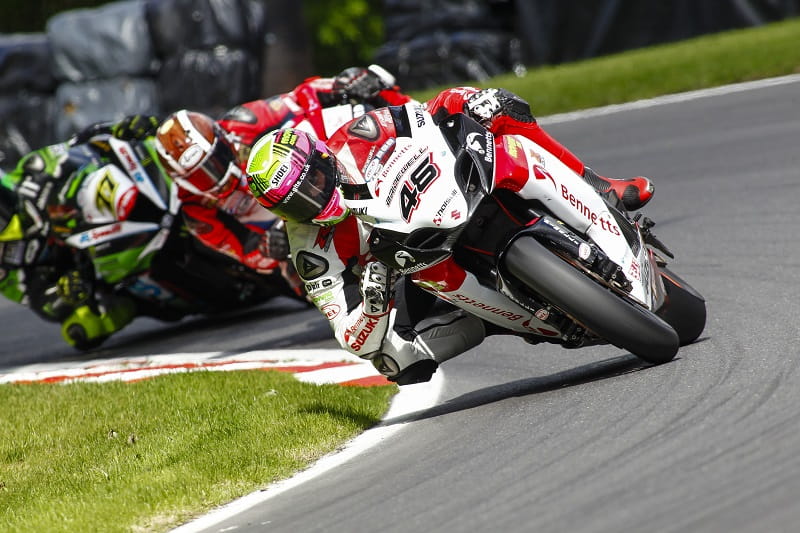 Tommy Bridewell took a brace of top five finishes onboard his Bennetts Suzuki GSX-R1000 at Cadwell Park and round eight of the British Superbike championship, as he kept his challenge for a place in the Showdown alive.

Bridewell started from seventh place on the grid for the weekend's opening race, and made a series of overtakes at a circuit that is notoriously difficult to pass at, to put himself in contention for a podium finish.

Battling all the way to the chequered flag, Bridewell secured a solid fourth placed finish, and more importantly, kept a number of his fellow Showdown challengers behind him.

In race two, Bridewell found himself embroiled in a fight for fourth place. Holding sixth on the final lap, a late move into the Old Hairpin saw hi m snatch fifth, and he held it to the line to take a solid haul of points from the weekend's action.

Tommy Bridewell, "The results this weekend actually make Brands an even bigger disappointment, because a worst of third in race one there and a top five and maybe even another podium in race two, would have meant we'd be in the Showdown now or very close to it after these results. I'm happy with the way I'm riding, and credit to the team because they've worked really hard to go from a disappointing start to the season to front-runners. The bike's mega; chassis and setup wise, I think we've got one of the best out there, and you can see that on TV with how late we can brake and the corner speed we're able to carry. I passed people on the outside at the end of the back straight into Park, I'm that confident with the package we have put together. The area we just need to work on is getting out of the corners. But we've now got just three races to make the Showdown. It would have been nice to have been on the podium today, and I could have done with beating [Peter] Hickman in the last race, but we had a lot of Showdown contenders behind us, and hopefully we can get three good results and a bit of good luck at Oulton to get ourselves in there."

Martin Halsall, Bennetts Suzuki Team Owner, "I'm really proud of our performance again this weekend. Tommy's ridden superbly well, he's gone faster than he's ever gone around Cadwell Park, and as a team it's been our best weekend here. A podium would have been nice, but you don't get given them in BSB and we raced hard for the results that we got, and we beat a lot of our rivals who are also pushing for a Showdown spot. It's still going to be incredibly difficult, but all we can do is try again at Oulton Park, beat who we need to beat, and hopefully get the rub of the green to elevate ourselves into the top six."