Top 10 for Bennetts Suzuki at Silverstone 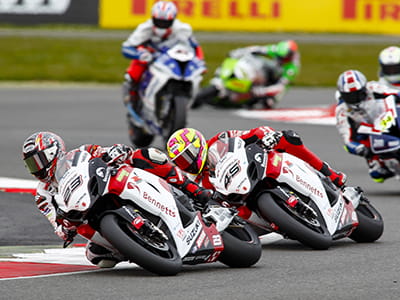 Tommy Bridewell scored a 10th placed finish on his Bennetts Suzuki debut, and despite a tricky opening weekend to the 2016 British Superbike season, the team has taken plenty of positives from the opening round.

On a weekend where dry track time was limited, the team has made good progress with its GSX-R1000 machinery. Despite having ambitions of higher placed finishes, both Bridewell and teammate Ryuichi Kiyonari are still upbeat with the performance of the bike and the team, and the work carried out over the course weekend.

Race one saw Bridewell finish in 10th place, eight seconds off the lead and one position ahead of Kiyonari, who was pushing for a top seven finish before a mistake cost him time and positions.

Unfortunately a tyre gamble in race two didn't pay off for Bridewell, who was unable to maintain his early pace for the full race distance and eventually dropped back to finish in 16th place, while Kiyonari rode a 12th placed finish after struggling with chatter.

Tommy Bridewell said after race two, "Well that didn't work as I'd hoped. With about nine laps to go the tyre just dropped off and was wheel-spinning all over the place. It was fun, but not ideal for going fast. It was good at the start and I felt good, but once it went off I couldn't keep the times up. The results aren't great and I am disappointed, but I can also feel the difference with the changes we've made in each session. The bike's feeling really good and I've felt good on it, but it's just not come together this weekend. I'm looking forward to Oulton now and we'll go again from there."

Ryuichi Kiyonari said, "Today we struggled with some chatter, which mean 't I couldn't push as hard as I would have liked. In race one our times were still quite good and I could have had a seventh before I made a slight mistake. For race two we made some suspension changes to see if we could cure the chatter, but it didn't work as we would have liked. It's not a great weekend for the results, but I'm still positive and can feel the potential. Mid-corner and coming out of the corner the bike is really good. We need to work on being further up the grid at the start of the race, and once we have sorted the chatter issue I know we can run nearer the front."

Martin Halsall, Bennetts Suzuki Team Owner, added, "The results haven't been great today but I've never seen two riders so positive. He and the team have tried something in race two, it hasn't come off, but that's sometimes the way it goes. But over the course of the whole weekend he's worked hard to keep improving the bike, and the feeling he h as is very good. It's just not happened for him this weekend. But he'll come back stronger at Oulton.

"On Kiyo's side of the garage we've had some issues with chatter, which we didn't have at Donington. Despite that he was still pushing on and it was looking like we'd get a good strong result from him in race one. It wasn't to be but his times and the gap to the leaders gave us plenty of positives to take. Race two wasn't so good, but that's racing and you have bad days. We'll go away and look at the data between now and the next round, and look for better results there."

The second round of the 2016 British Superbike Championship will take place at Oulton Park on April 30 - May 2.