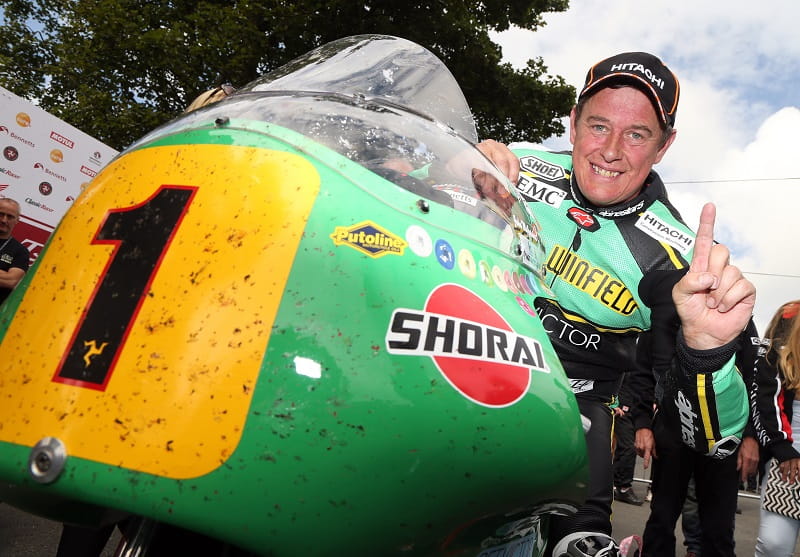 Twenty-three-time TT Race winner John McGuinness, riding the Team Winfield Paton, won his first Classic TT Race in today’s Bennetts Senior Classic TT Race on the Isle of Man.  The Morecambe rider, who has retired in his three previous attempts, set a new lap record of 113.342mph and race record in the process.

McGuinness and Dean Harrison, on the Black Eagle Racing MV Agusta, were separated by fractions of a second on the opening two laps before a decisive late pit strategy by Team Winfield eventually saw McGuinness take the win by twenty seconds.

McGuinness said:“We’ve been trying hard for the last four years which have been really frustrating but we’ve got it now.  It was nip and tuck all the way with the young fella. I thought I might be able to get a lead and ease off but no chance. It’s been mega, I’ve really enjoyed it. I’ve had to really learn to ride the bike, keep the momentum. It’s like riding a 250 round here.”

The sunshine came out on the Isle of Man for the first race day for the Isle of Man Classic TT Races presented by Bennetts and conditions were reported as dry all round the course.

John McGuinness was first away at 11.30am and was first on the road to Glen Helen and on time at the first checkpoint at Glen Helen, establishing a lead of 1.5 seconds from his nearest rival Dean Harrison, who won the corresponding race in 2015 with Maria Costello tucking into third a further seven seconds behind Harrison.  McGuinness’s Team Winfield team-mate Conor Cummins on the second Paton was holding fourth with Alan Oversby on the Davies Motorsport Honda fifth, fifteen seconds behind the leaders.

At the front of the field a close battle was developing between McGuinness and Harrison with Harrison edging in front at Ballaugh, only 0.162 ahead of McGuinness with Maria Costello maintaining third place but with the gap already extended to seventeen seconds from the leading pair.

That remained the top three at the end of the second lap, but with Harrison having opened up a lead of over a second earlier in the lap, McGuinness ate into the lead and set a new lap record of 113.342mph (19:58.394) for the class.

Meanwhile Rutter had moved up into fourth place by Ballaugh on his second lap ahead of fifth placed Oversby.  However, it was clear that Rutter had machine issues as he came in to the pits and he duly retired at the end of the second lap.

Harrison’s pit of 46.973 seconds put the Yorkshire rider almost a minute behind McGuinness at Glen Helen on the third lap.  Alan Oversby, like McGuinness, elected to run straight through at the end of his second lap, and edged in front of Costello on corrected time.

James Cowton, due to start 19, set off from the back of the field on the Dave Kennah Racing Norton following machine issues, made a huge effort to get to 6th place before retiring on his third lap at Signpost Corner.