Visit us at the London Motorcycle Show 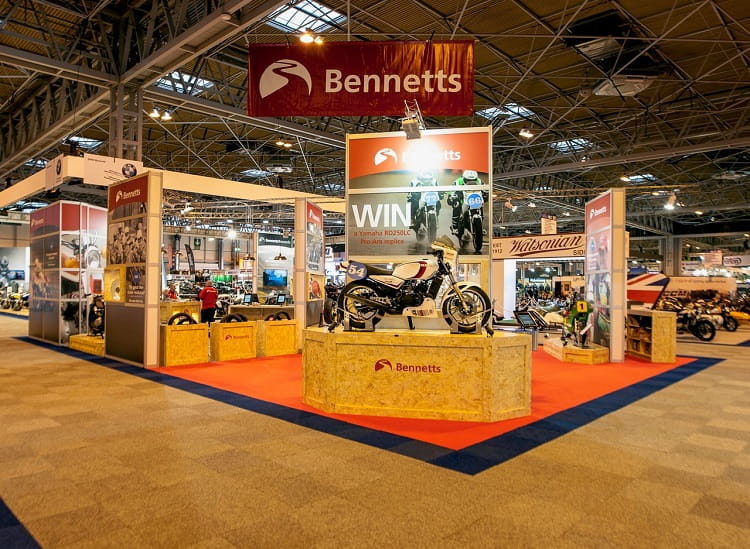 The London Motorcycle Show will return to the Excel on 17th-19th February where over 22 of the world’s leading manufacturers will showcase their latest bikes alongside rare collections and plenty of live action. Fans will also have plenty of opportunities for star spotting with Carl Fogarty and Charley Boorman confirmed to attend.

On the Bennetts stand (R410), will be the BSB’s 2017 Bennetts Suzuki GSX-R1000R, and Isle of Man TT-legend, John McGuinness will be available for signings across the three day show - when he’s not battling Neil Hodgson, Troy Corser and Mark Lemon on the ‘Slide Show’!

There will also be the opportunity to win a replica Yamaha RD250LC (T&Cs below), from the revived Pro-Am series that was showcased at the British MotoGP in 2016.

If you’re looking for insurance advice, Bennetts advisors will be on hand throughout the show for quotes and our existing policyholders are invited to stop by for a coffee and a chat on the stand.

Keep an eye out on Twitter @bennetts_bike for information on signings as well as a competition to win a signed helmet by former World Superbike champion, Sylvain Guintoli.

14.       Details of the Winner(’s)(s)’ names may be obtained by sending a personal message to sofie.bronserud@bennetts.co.uk within 6 (“six”) weeks of the Closing Date.

15.       Personal data supplied during the course of the Promotion will only be used for the purposes of the administration of the Promotion but may be passed on to third party suppliers only insofar as required for fulfilment/delivery/arrangement of the Prize.

16.       The Winner may be required to take part in reasonable publicity in connection with the Promotion, including the publication of their name(s), geographic location and photograph.

17.       The Promoter accepts no responsibility for any damage, loss, liabilities or disappointment incurred or suffered by you as a result of entering the Promotion or accepting the Prize. The Promoter further disclaims liability for any damage to your or any other person's computer relating to or resulting from participation in or downloading any materials in connection with the Promotion.

18.       The Promoter shall not be liable for any failure to comply with its obligations where the failure is caused by something outside its reasonable control.

19.       The Promoter shall not be liable for any additional expenses incurred by the Winner in connection with the Prize including but not limited to travel, accommodation or refreshments.  Where the Prize involves use of a third party’s goods or services/attendance at a third party’s venue, the Winner will comply with any additional conditions applicable to attendance at/participation in an event/venue].